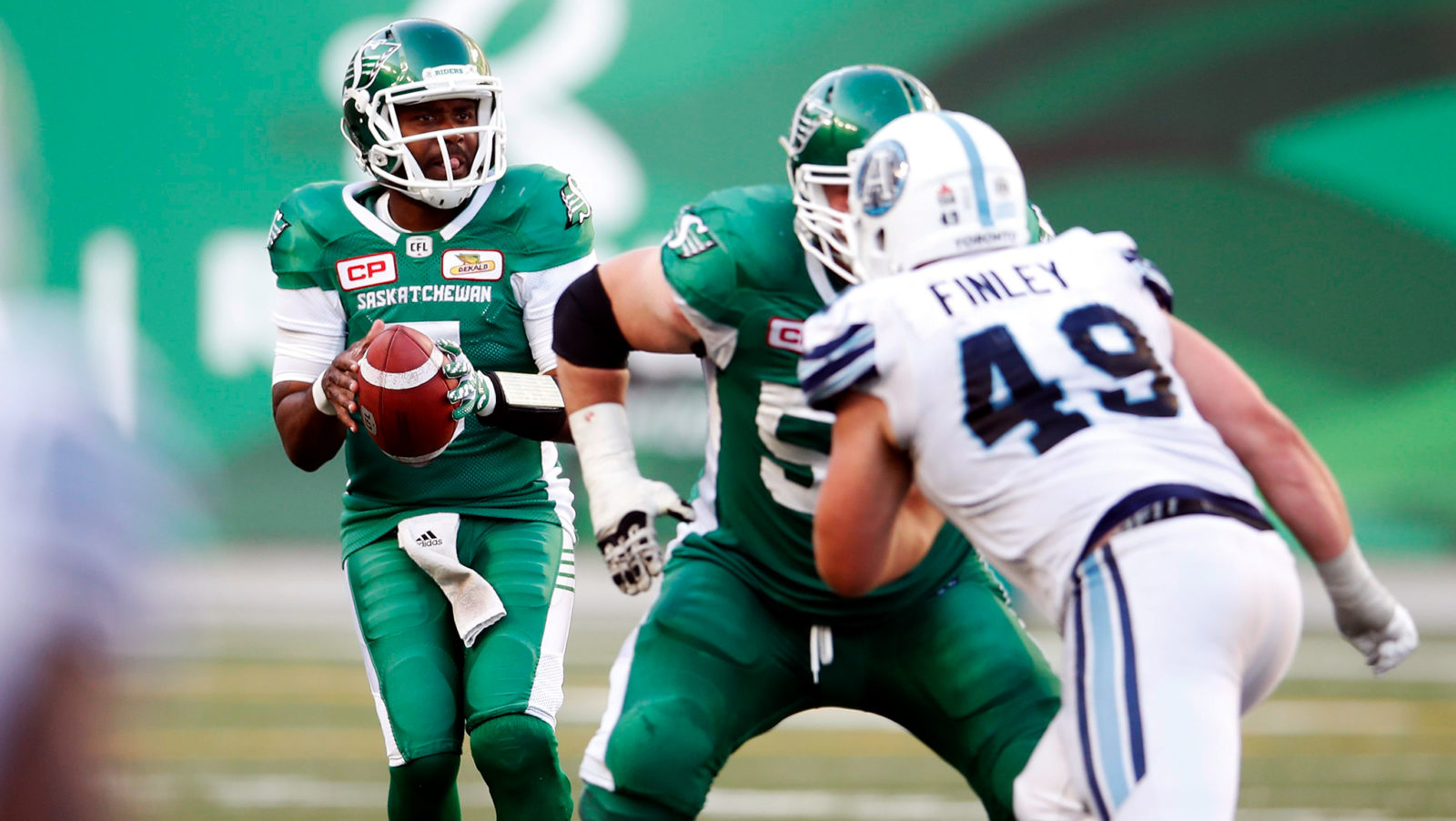 Two more contests until we find out who is headed to the big dance in Ottawa.  Saskatchewan is riding high after a convincing effort over Ottawa but now will face one of the league’s most productive offences in Toronto.

The Esks proved why they were the favourites earlier in the year but now take on the only team that has gotten in their way in the West in year’s past. 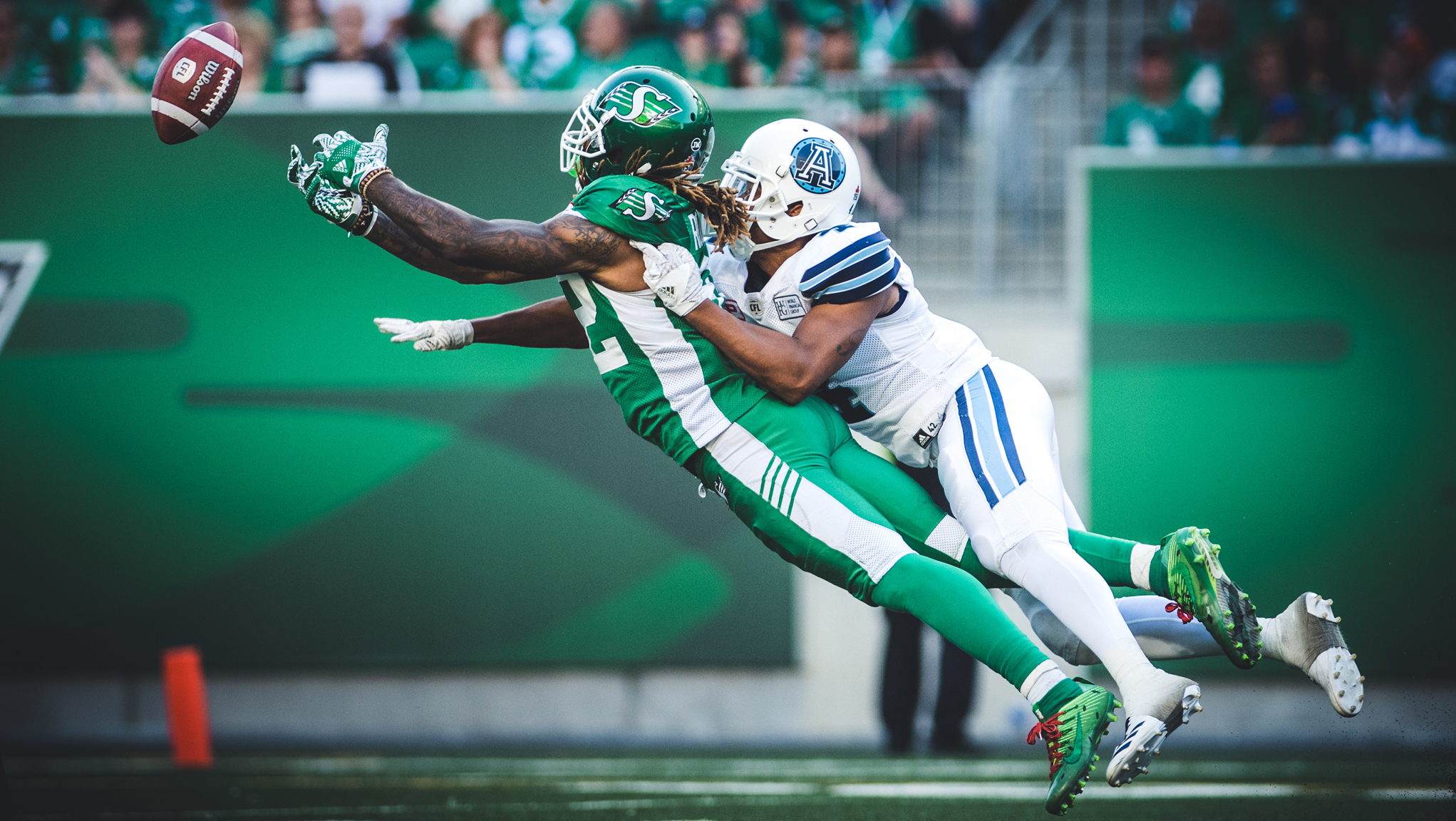 The Eastern Final should be closely contested with a pair of teams that have played twice this year against one another in games that came down to the final minutes.

The common theme in these playoffs is how close the teams are matched up, which creates headaches for someone tasked at picking winners.

The Toronto Argonauts have a triple threat on offence that offer a hard test for opposing defences as James Wilder Jr. has been the best back in the league over the last two months, while Ricky Ray and S.J. Green offer the steady veteran presence required to win come playoff time.

Marc Trestman got an extra week to prepare for either Saskatchewan or Ottawa and will have more than enough ready to throw at the Roughriders.

But the Riders should know Wilder will get 20 touches and Ray will throw over 30 pass attempts. It’s been almost automatic when the Argonauts have been successful, so the pressure is up on the Riders defensive line and linebackers to try and get a pass rush with limited numbers, while being able to cover Wilder out of the backfield.

The Riders offence meanwhile got faster with Marcus Thigpen getting the opportunity to run the ball. His breakaway speed will be hard to handle sideline-to-sideline if the Riders spread things out a bit. Kevin Glenn was able to spread the ball around to arguably the best receiving corps in the league. Good luck trying to cover everyone. Ottawa was clearly outmatched.

The flip side is the defensive line for the Argonauts should be able to create much more pressure on Glenn, which will make it hard for him to find his third or fourth reads like he was against Ottawa.

The Riders defence run by Chris Jones will have things in the bag, as Jones always has something up his sleeve in the playoffs. You don’t have multiple Grey Cup rings by accident.

This is going to be a great coaching chess battle between two of the most successful coaches in recent CFL history.

I think the Riders have the momentum and the confidence. There seems to be something special around these Riders that I can’t quite put my finger on. 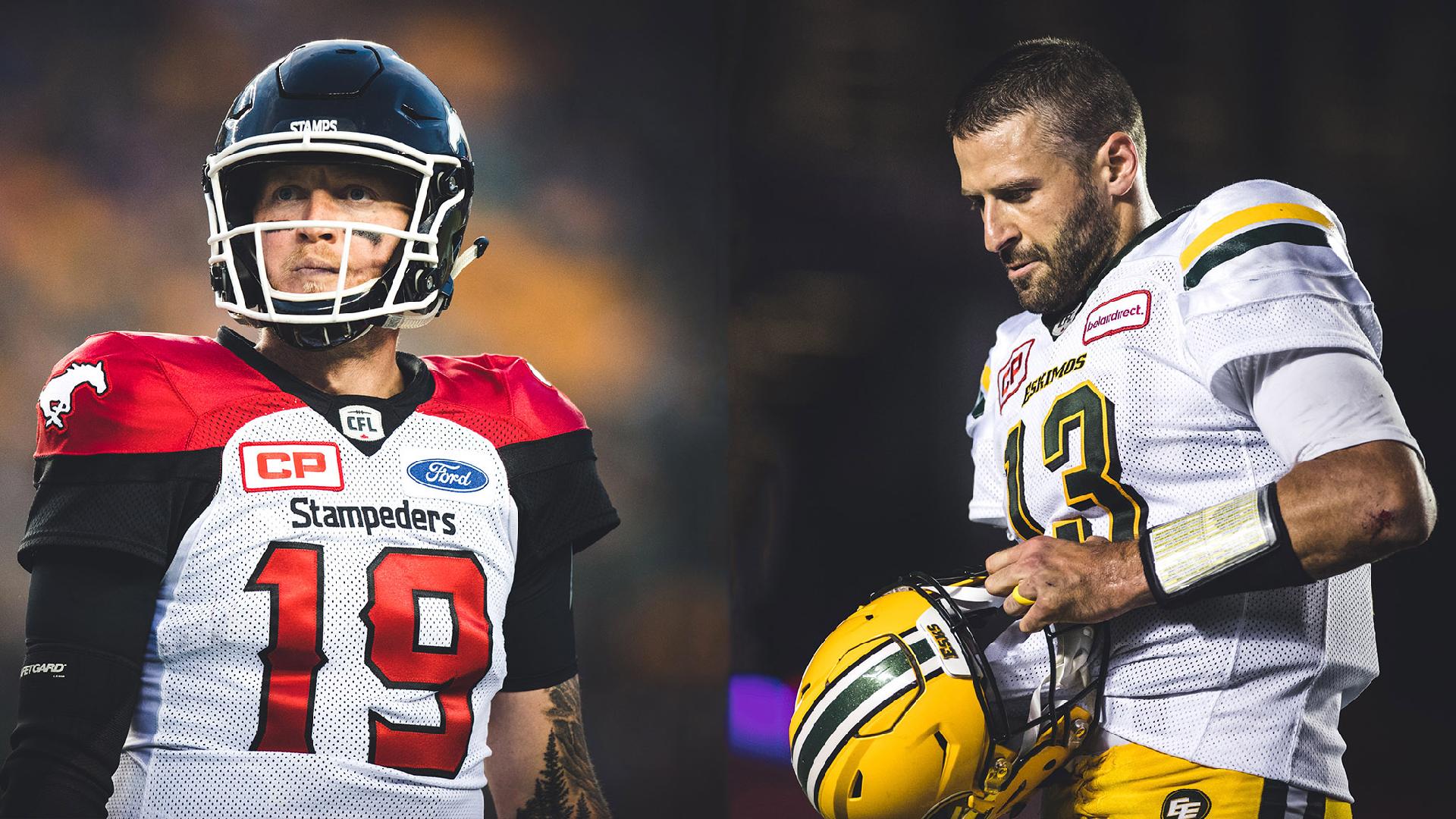 Sunday’s Western Final will have yet another chapter written in the epic battle between Bo Levi Mitchell and Mike Reilly.

I’d love to pick the Calgary Stampeders based on the defence. They were the best in the CFL from wire-to-wire, with the exception of the final three games of the season as they were already clinched to take first in the West Division.

But it’s that time off from intense ‘must win’ football that I fear for the Stampeders. Bo Levi Mitchell has also not been his MOP self at quarterback for Calgary.

The Eskimos needed a big special teams play against Winnipeg to start taking control of that game and once they did, they had the killer instinct it needs.

However, Mike Reilly appears to be unstoppable.

C.J. Gable has added a great dimension out of the backfield and with play action from Reilly allows breakdowns in the secondary to get Adarius Bowman, Brandon Zylstra and Derel Walker to come open down field. There was a few times, Winnipeg’s secondary looked lost against Edmonton.

Calgary, however, is the best team in the league. Bo Levi Mitchell has enough weapons and if Jerome Messam can get rolling that would be a huge x-factor in this game.

I also feel Mitchell will feel disrespected with the amount of odds are being laid down on Edmonton. I’m not sure how much an inspired Mitchell will impact an already charged game due to the playoffs.

And now back to the defence. I believe the Stampeders defence is going to come after Reilly early and make him take a few hits. It’s one of the best defenses I’ve seen. I think the Stamps will be able to own the line of scrimmage.

Although it isn’t the popular choice, I’m picking the top two defences in the league through my rankings to make the Grey Cup.

With the CFL continuing its partnership with DraftKings for a second season, fans can experience the excitement of daily fantasy and test their skills without making a season-long commitment.

Each week throughout the 2017 season, fans will have the opportunity to set their ultimate CFL fantasy team. DraftKings offers free-to-play contests, the ability to play privately with friends or with other fans globally to win prizes, tickets and exclusive VIP CFL experiences.

Nye makes his picks below: 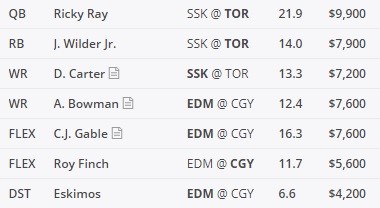 Ricky Ray and James Wilder Jr will get their points. I think Ray may have to throw a lot in this game at the end at that could equate in to some decent points but Ray throws a lot anyway and with around 75% completion, there will some points to go around.

I’m waiting for the Duron Carter break out game in the playoffs after a relatively quiet night against Ottawa. Carter is a player that Glenn can rely on to try and hit the home run ball. I feel you may see a few 50/50 balls to Carter,with 89 coming down with it.

Now the other semi final, I’m going with CJ Gable and Adarius Bowman due to the interest being paid to Brandon Zylstra and Derel Walker. Gable has proven he can run the ball very well and is generous if this turns into a slugfest with the Stampeders.

I’m going with the Eskimos defence as they are the cheapest option to help spread money around elsewhere.

Roy Finch has speed in the open field that may be unmatched in the CFL. While I know Finch will get a lot of special teams looks, I feel he could be a secret weapon for the Stamps with Finch possibly getting more reps at receiver or slot.