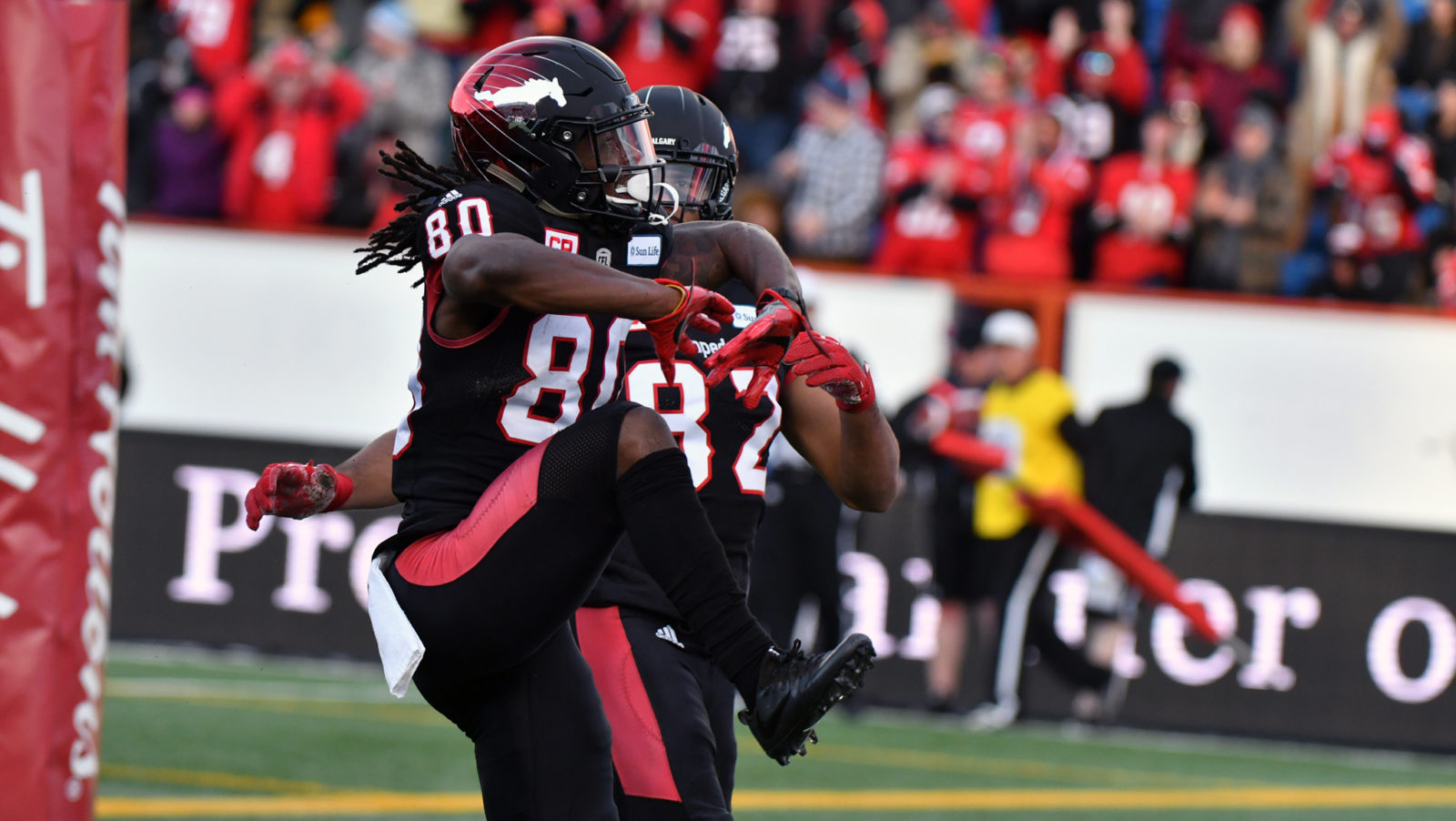 CALGARY — The Calgary Stampeders erased an early two-touchdown deficit, defeating the Edmonton Eskimos 32-28 to punch their ticket to the 105th Grey Cup presented by Shaw.

Calgary will take on the Toronto Argonauts in the nation’s capital on Sunday, Nov. 26.

The Eskimos roared out to a 14-0 lead after scoring on their opening two possessions — including a 69-yard touchdown by Derel Walker on a busted coverage — but the Stamps rallied back in a big way, going on a 30-1 run with touchdowns from Marquay McDaniel, Marken Michel, Roy Finch and Jerome Messam to take a two-score lead.

Mike Reilly‘s quarterback sneak with seven minutes left in the fourth made it a one-score game, but that was the closest the Eskimos would get after Jason Maas opted to kick a late field goal on third-and-four at the Calgary 10. The Esks would not get the football back, with Jamill Smith fumbling a punt in the game’s dying moments.

RELATED:
» Stage set for 105th Grey Cup presented by Shaw
» Head to Head: Who has the edge in the Grey Cup?
» By the numbers: EDM at CGY box score
» Through the Lens: Esks at Stamps images
» Ray’s late rally leads Argos to Cup berth

Bo Levi Mitchell threw for 228 yards and a touchdown on 20-of-32 passing while four different Stampeders scored touchdowns, as a crowd of 30,116 at a windy McMahon Stadium watched the home team advance to its second straight Grey Cup.

Reilly, the Eskimos’ quarterback and the favourite to win Most Outstanding Player, threw for 348 yards and a touchdown in the loss as the Esks’ six-game winning streak came to an end.

After struggling to run the ball the last month of the season, the Stampeders re-established their ground dominance in the win, with Messam and Finch combining for 152 yards and two touchdowns. Messam added 44 yards through the air.

Kamar Jorden had a team-high 111 yards on six catches, while Vidal Hazlelton and Walker led the Eskimos with 113 yards and 112 yards respectively.

The rest vs. rust debate played out in the Eskimos’ favour early, as the Stampeders, after playing in only three games since the start of October, sputtered out of the gate on both sides of the ball.

After a quick two-and-out by Mitchell and co., Adarius Bowman‘s catch moved the Esks down to the Calgary 30 after Reilly threaded the needle on a pass in single coverage. A defensive holding penalty negated a second-down stop by the Stamps, while Hazelton’s second-down catch set up a third-and-one gamble inside the Calgary 10.

Eskimos head coach Jason Maas was aggressive, as expected, and it paid off for the Green and Gold. On the third down play, Reilly handed the football off to his bell cow back in C.J. Gable who put his foot in the ground and bounced outside for an eight-yard touchdown run, giving the Eskimos a 7-0 lead.

Calgary’s second straight two-and-out put the Eskimos right back on the field, and Reilly made the Stamps pay for their slugglish start. On second-and-four, off a play-action fake to Gable, Walker got wide open on broken coverage, burning Calgary’s defence for a 69-yard touchdown to make it 14-0.

The visitors held an edge in yards of 120-45 through the first 15 minutes, but the Eskimos’ dominance ended right there. A bizarre connection with an offensive lineman-turned eligible receiver in Dan Federkeil turned into a 16-yard gain, while Messam’s first-down catch put the Stamps on the doorstep.

On the very next play, Mitchell found an open McDaniel underneath and the veteran receiver found the end zone with ease, capping off a six-play, 73-yard scoring drive and cutting Calgary’s deficit in half, 14-7.

After struggling to get off the field early, the Stamps’ defence came up with a key second down stop soon after. With the Eskimos near their own 50, Reilly’s pass went over the head of Hazelton on a one-on-one with Ciante Evans on a go route.

Two possessions later, Michel, on a jet sweep, was celebrating in the end zone on a 13-yard touchdown run, making it 14-14 with 3:23 left in the half. The drive, which started at Edmonton’s 41 after a facemask penalty on the punt, saw Messam convert two second downs on the way to a five-play, 41-yard drive.

Reilly opened the game with six straight completions before falling into a 2-for-6 funk that saw the Eskimos punt on four straight possessions. While they did get their offence moving again, they were forced to settle for a single point when Sean Whyte‘s 42-yard field goal try sailed wide left.

Down 15-14, the Stamps continued to tilt the field in their favour. There was only 1:06 left in the half but that was all Dave Dickenson’s offence needed, going 78 yards in six plays, including an 81-yard touchdown dash by Finch. Messam’s two-point convert made it 22-15 at the half.

Looking to end a 22-1 Calgary run, the Eskimos’ offence flew out of the gate in the third quarter, but after three quick completions, including a 16-yard pickup by Hazleton, Whyte’s 30-yard attempt hit the upright, leaving the Green and Gold empty-handed.

At that point the Stamps’ momentum just couldn’t be curved, because eight plays and 80 yards later, Messam was running 14 yards into the end zone on the draw play, extending Calgary’s lead to 30-15 with six minutes left in the third.

The Eskimos added a field goal from Whyte in the third, while Rene Paredes‘ try missed to the right, leaving the Stamps with a single and a 31-18 lead going into the fourth.

Edmonton responded when Reilly found Hazelton for a 30-yard gain down the right sideline, setting up a one-yard plunge by the veteran quarterback.

The Stamps drove but eventually stalled, setting up a punt single by Rob Maver and a seven-point game with four minutes to go. Suddenly, with the clock ticking on the fourth quarter, the game was very much in the balance.

With time running out, the Esks went on a 10-play, 62-yard drive, eventually opting to settle for a 20-yard field goal by Whyte on third-and-four. Maas’ decision to settle for three may have cost the Eskimos, who ran out of time after allowing Cote to move the sticks on the ensuing drive.

At the end of the day, Sunday’s duel could be described as a masterpiece between two of the league’s most dominant teams. Neither team turned the football over, while only two yards separated the clubs on the stat sheet (402 yards for Edmonton vs. 400 yards for Calgary).

The Eskimos also held an edge of 21-20 in first downs.

Whyte finished 2-for-4 kicking field goals for the Eskimos, while Paredes missed his only attempt.

With the win, the Stampeders took three out of four games against their Alberta rival in 2017. They’ll take on the Argos on Sunday in Ottawa, a team they swept in two regular season matchups.

Their shot at redemption comes one year after being upset by the 8-9-1 Ottawa REDBLACKS in the largest upset in Grey Cup history.

Canadian and 2017 CFL Draft pick Tunde Adeleke left the game in the first quarter and did not return. He was replaced by veteran Joe Burnett.