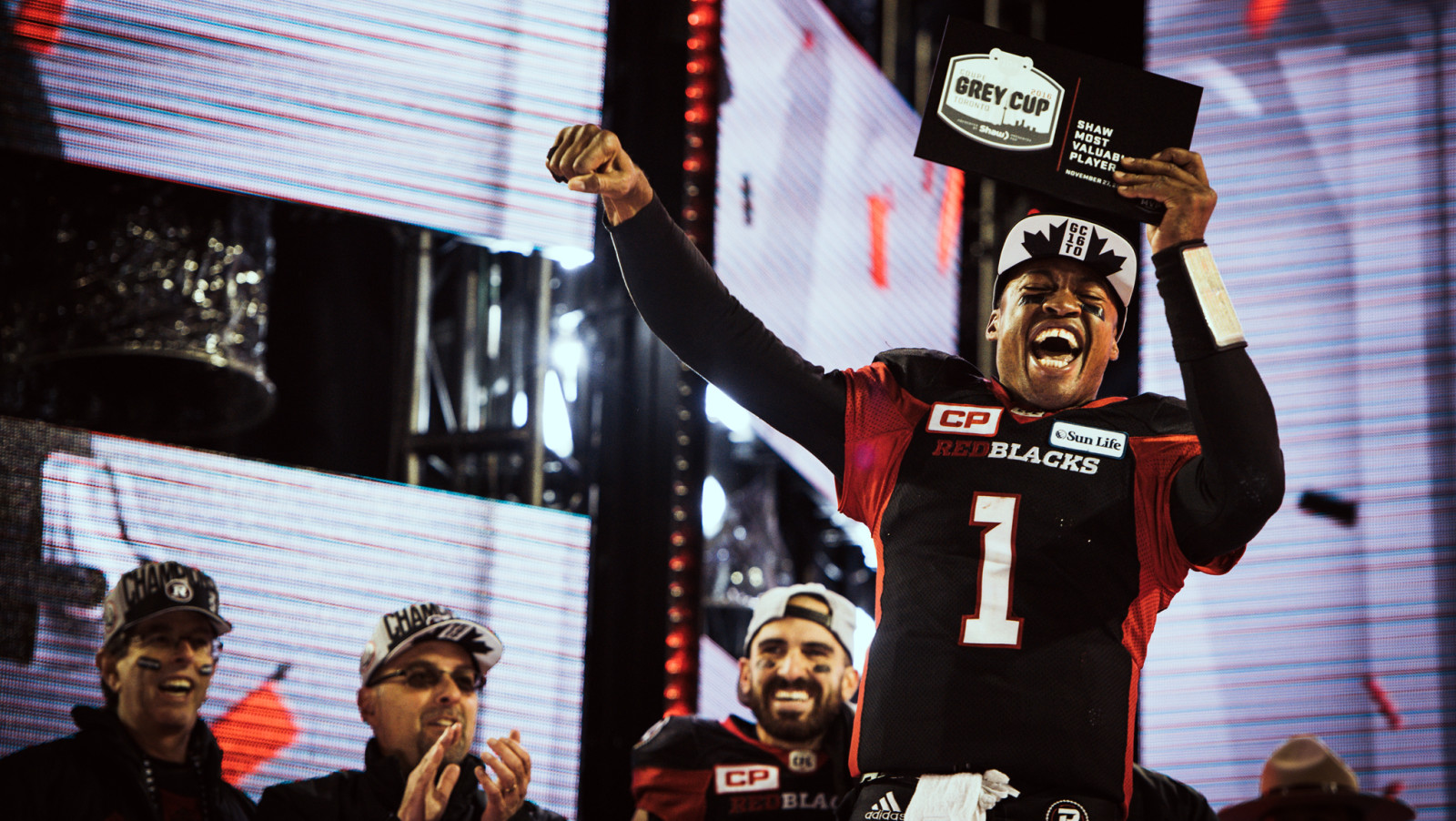 Please allow me a moment to interrupt your regularly scheduled programming of previewing the 105th Grey Cup to look back at the 104th. I understand that in 2017, we all suffer from prisoner of the moment syndrome — ‘that was the greatest play/player/game that I have ever seen!’ We forget about the past, we discount what happened just a few years ago as newer and shinier experiences push out old memories. I am guilty of this as well; hey, it’s hard to keep track of the past.

So as we get set for Toronto versus Calgary, let me remind everyone that what Henry Burris did last year in that 39-33 upset over Calgary was the single greatest game I have ever seen by a quarterback in the Canadian Football League. Hell, I might be committing a prisoner of the moment foul with that statement, but I don’t think I am.

Whenever I consider just how great any single performance is by any athlete, the first thing I do is examine the degree of difficulty in said game. It’s one thing for a quarterback to beat a sub .500 team at home when your defence forces four turnovers. But what Burris faced that day was a completely different monster.

RELATED: THE 105th GREY CUP PRESENTED BY SHAW
» The Grey Cup stage has been set
» Head to Head: Who has the edge in the Grey Cup?
» Ray’s late rally leads Argos to Cup berth

The Calgary Stampeders were 15-2-1 and only one of those losses was with Bo Levi Mitchell starting. The same Bo Levi Mitchell who would win the MOP as he threw a league-high 32 touchdown passes. Calgary scored the most points and allowed the fewest points; beat up quarterbacks on a weekly basis led by Charleston Hughes and his 16 sacks; and had committed 20 fewer turnovers than the Ottawa REDBLACKS.

Speaking of getting beat up, the REDBLACKS’ offensive line gave up 50 sacks, so Burris did not exactly go through the year with a clean pocket. There was a reason Calgary went in as a 9.5-point favourite and most people (myself included) thought the Stamps would easily cover. Just one week earlier, the Stampeders led 32-0 at the half in the Western Final against the BC Lions. So to summarize, a 41-year-old Burris was going up against maybe the greatest regular season team in the history of the CFL on a team that went 8-9-1 and was outscored for the year in the inferior East Division. So yeah, to call this a daunting task for Ottawa to win is a massive understatement.

So of course Henry Burris throws for 461 yards and three touchdowns while adding two more scores on the ground. No one put up those kind of numbers against that Calgary defence. One of the crazier aspects of that game was there was a moment before kickoff when we weren’t even sure if Burris was even going to play. He apparently suffered some sort of bizarre injury during warmup and there was talk that it would be Trevor Harris starting. Have I mentioned the sky-high degree of difficulty level that Burris was facing right before the game had begun? Oh, I have?

Back to the game, the 2016 Grey Cup. Smiling Hank was sharp right from the start. On Ottawa’s first touchdown drive, Henry converted on a 2nd-and-18 to Greg Ellingson. Throughout the game he was throwing lasers against that secondary, from finding players who were wide open to threading the needle on well-covered targets. On a 2nd-and-10 with under two minutes left in the first half and the REDBLACKS backed up into their own end zone, Burris was flushed out to his right and he managed to find Brad Sinopoli for a first down, ensuring that Calgary would not be given a safety or at the very least favourable field position.

Maybe the most impressive statistic from that night was the fact that on 12 occasions Burris converted on a second down of five yards or more against a defence that was littered with all-stars on every level. I do have one question about Burris’ two rushing touchdowns: Where was Ottawa’s short yardage quarterback? Did the REDBLACKS not have their own Cody Fajardo they could call on? What is a 41-year-old man doing cramming his body into that chaotic mess of humanity known as a goal line stand???

Now of course this game was not just about the quarterback. The defence picked off Bo Levi Mitchell three times, something Bo had only done once, back in Week 1 in 2015, in his entire career. The offensive line only allowed one sack, while Ernest Jackson, Ellingson, Sinopoli and Juron Criner all had their own moments of individual brilliance. But in the end, this game will go down as the greatest mic drop in the history of the league. Like John Elway with the Denver Broncos, Henry Burris left the game at the perfect moment by playing the most remarkable game I’ve ever seen in the CFL.