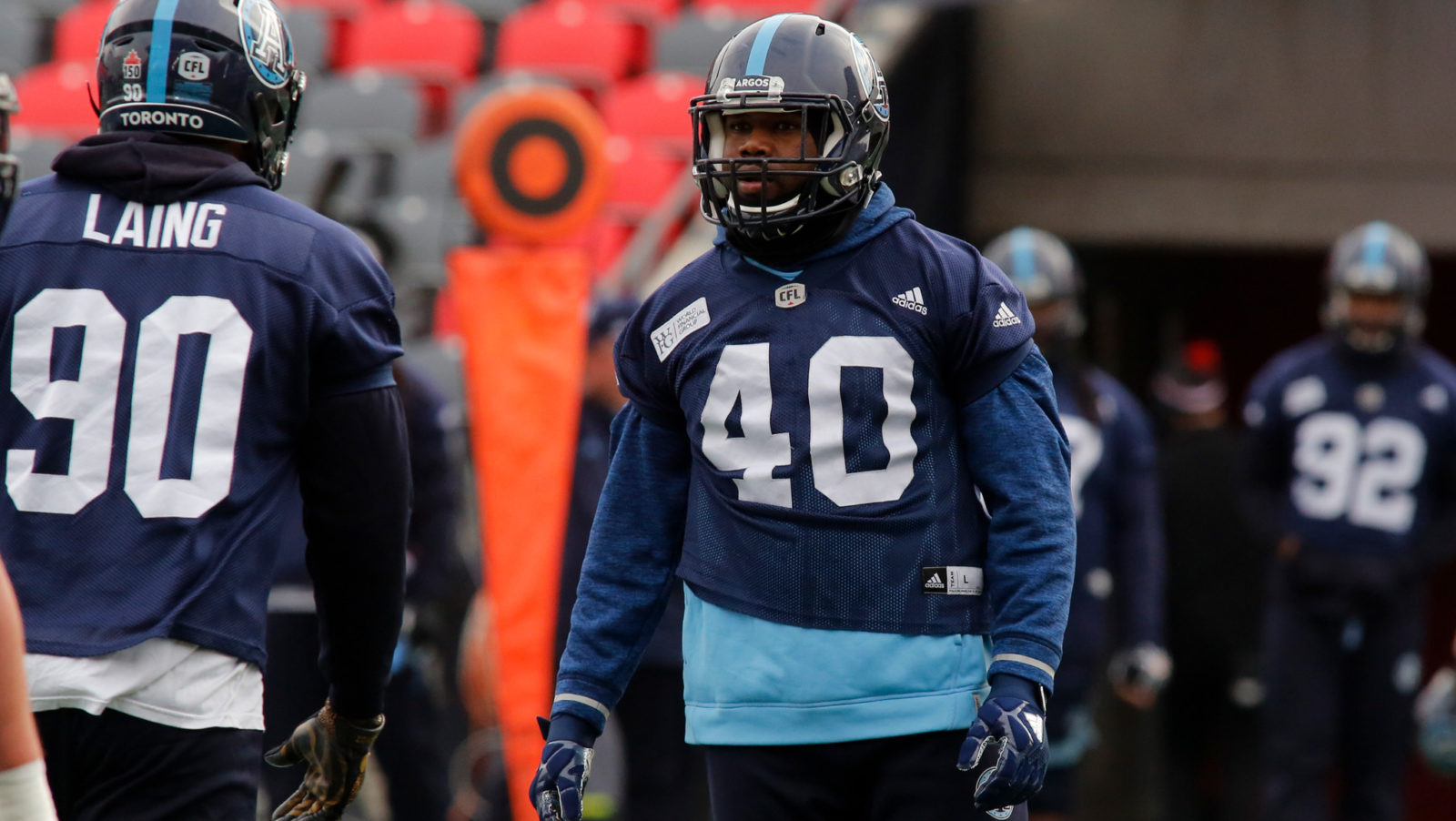 They are bookends that have one main goal: Get to the quarterback first.

That Shawn Lemon and Victor Butler form one of the more formidable defensive end duos in the CFL is a given. They are a complimentary pair who seem to be good for each other on the field, not just due to their respective physical capabilities but also in their great regard for one another as well as a personal competition to outdo the other wherever possible.

Lemon, if you can imagine, can actually be upstaged by the energetic and vociferous Butler, the first year CFLer who burst onto the scene in the early going of the 2017 campaign. 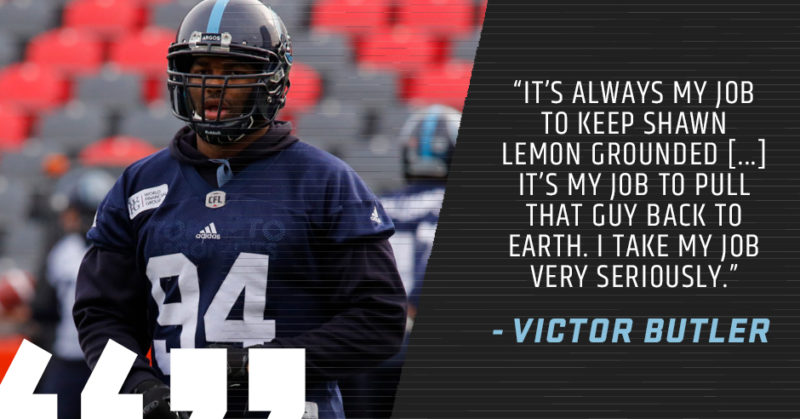 Lemon’s a known chirper, but this week he has fairly well kept it cool, while Butler is a steam train of quotes, happy to light up the man who lines up at the other end of the defensive line.

“It’s always my job to keep Shawn Lemon grounded,” said Butler, just after looking over at his buddy and then making fun of the physical size of Lemon’s head. “It’s my job to pull that guy back to earth. I take my job very seriously.”

“That’s Victor’s personality and that’s why we mesh well,” Lemon had said a little earlier, unaware of the verbal jab taken at his cranium.

“We enjoy each other.”

Lemon was actually reacting to the fact that Butler had, a day earlier, burst into the media tent while Lemon was at the podium, answering questions from all comers. Butler proceeded to ask Lemon questions about how great it is to play with Victor Butler.

“I got it later, though,” said Butler when informed that Lemon had not taken the opportunity to light him up in the interview I’d just wrapped up with him. “And I got it this morning.”

On the field, the two have had moments where they’ve made beautiful music together, last week’s Eastern Final being a case in point. Butler had three tackles against the Saskatchewan Roughriders, a pass knockdown, and five quarterback pressures. Lemon had three sacks, five tackles totalled, and a quarterback pressure.

Part of their success – which the Argos will hope to see on once again when they take on the Calgary Stampeders in the 105th Grey Cup presented by Shaw – comes from their fast friendship and, when you get down to it, healthy respect for one another.

“Those guys are buddies,” said Argos Defensive Coordinator Corey Chamblin. “There’s actually a great chemistry between them. Shawn learns from Victor and Victor is very open to learn from Shawn about this game.

They compliment each other very well.”

“I don’t know if it’s comlimentary, but I know the guy is better,” said Butler when asked to shift from razzing Lemon to praising him. His tone changed completely and he glanced over at Lemon, again, as he spoke.

“When you’ve got a guy like that, it forces you to elevate your game. Or you’re gonna get left behind.”

“Playing with Shawn Lemon has made me a better football player.”

For his part, Lemon jumped right into saying very nice things about his bookend, choosing to forego the chance to take a free shot or two, although Butler insists he gets it back in great quantity in more private settings. For Lemon, Butler’s NFL resume stands out, as do his obvious physical advantages. The two of them, he said, have been able to translate their friendship off the field to something good on it.

Butler’s super-fast start to the season may have been helped out by the fact that opponents didn’t know very much about him, while they knew a ton about Lemon. The veteran quarterback hunter had built his impressive CFL resume with Calgary before taking his talents to Ottawa followed by a short, unhappy stay with Saskatchewan before landing in Toronto in 2016.

If the new guy was left alone because of a more intensive effort to focus on the guy that opponents already knew was a danger, Butler took advantage. In his first three games he rolled up seven sacks, two forced fumbles and thirteen tackles.

“People tend to leave me alone. Great to be the little fish in the ocean. Shawn’s the shark, I’m just a tuna, man.”

“The great thing about Shawn Lemon is he’s not just an athletic freak. There’s a science to the pass rush. The guy should have a PhD in it.”

The two have been good for each other, trading techniques and knowledge, Butler sharing what he learned during a six-year NFL career, Lemon schooling Butler on the nuances of the pass rush in three down football. 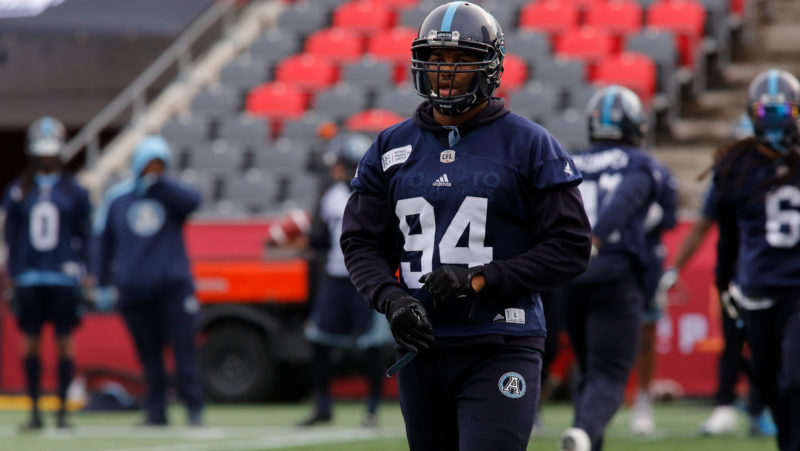 Beyond that, they have an amiable competition on the go as they each try to shed blocks and blow up plays in the backfield.

“It’s kind of a race to the quarterback,” said Lemon. “All of us are selfish in our own way, you know what I mean? We wanna get to the quarterback as fast as possible. We have little competitions to motivate each other.”

“They’re both racing to the quarterback and they enjoy it,” said Chamblin. “They have their friendly competition but it’s healthy competition what I see in those guys. I’ve been on enough teams where there’s and end on the right and an end on the left and there’s a divide. There is no division with those guys.”

Of course, no two defensive ends could enjoy the free roaming lifestyle that both Lemon and Butler do without the support of a formidable interior presence and the two of them were independently quick to credit the likes of East All-Stars Cleyon Laing and Dylan Wynn as well as the rotational support guys who can make their on-field lives more prosperous.

“Without them we wouldn’t have had half the success we’ve had this year,” said Butler, also named an East Division All-Star. “Those guys are the heart and soul, the meat and potatoes of not just the D-line, the defence. Without those guys in the middle, this defence does not work properly. They free us up and allow us to do so many things.”

“These guys allow me to make a mistake here or there because they’re just so good, so dominant, that you have to account for ‘em. Sometimes it leaves little ol’ me unattended.”

For his part, Lemon, who missed close to two months with an injury in 2017 before returning to the Toronto line-up for the final game of the regular season, feels blessed to be involved in a group so decorated.

As for the Grey Cup Game and the opposing Calgary Stampeders, Lemon said he likes the line’s chances. Asked if Calgary’s protections are the toughest in the league, he thought not.

Butler will do that too, of course, endeavouring to arrive before his good buddy does.