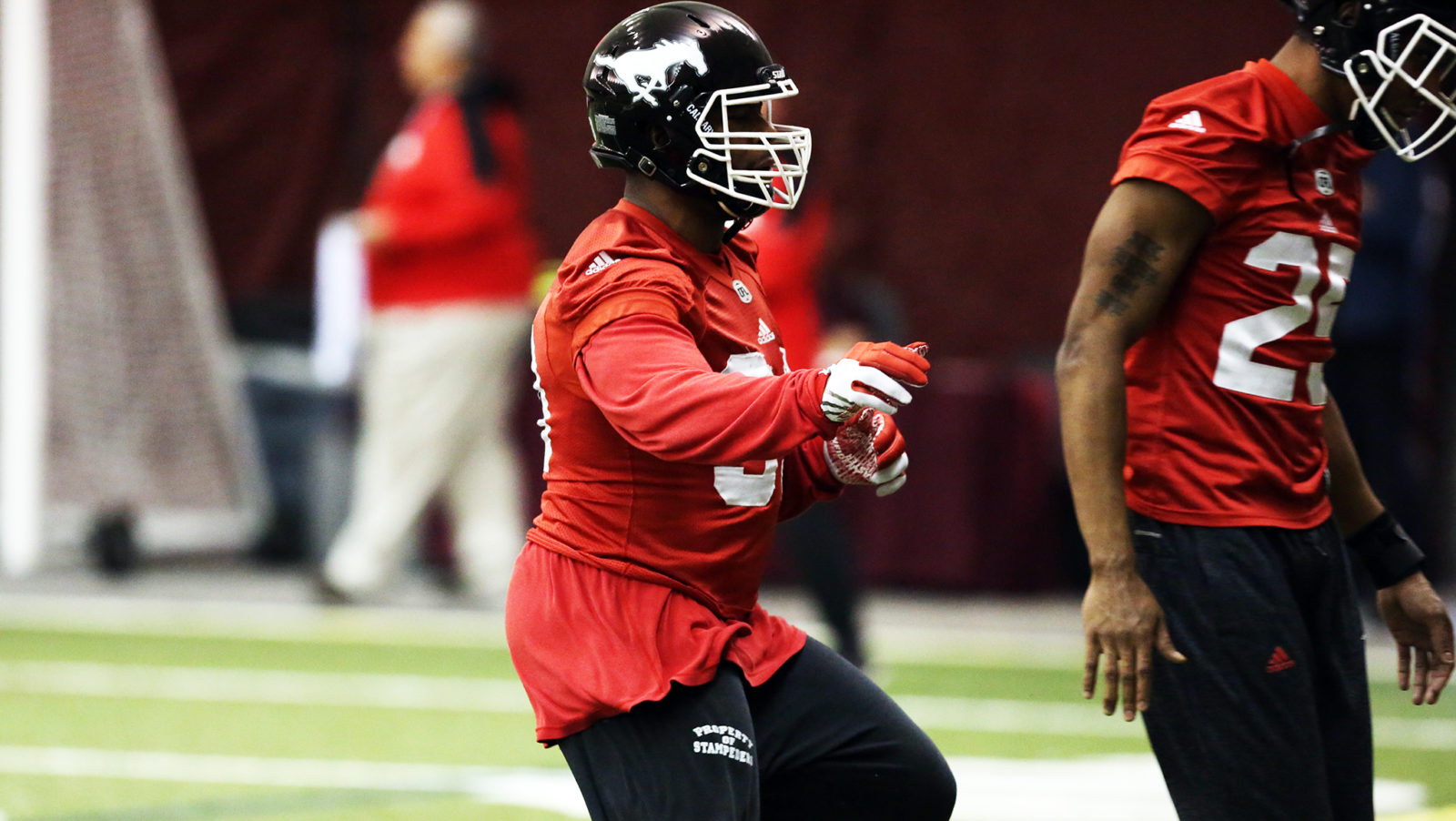 OTTAWA — Charleston Hughes has sacked more quarterbacks than any other CFL player over the last two seasons.

“Ricky Ray is not difficult to take down,” said Hughes, who led the league with 11 sacks and had 19 quarterback pressures during the regular season. “He’s one of the easier quarterbacks to sack. When he sees you coming he’s going to turtle.”

Ja’Gared Davis, Hughes’ bookend on the Stampeder front four, was a little more retrospective when talking about Ray.

“He’s a savvy quarterback,” said Davis, who had nine sacks this year. “He’s a guy who has been in this league for a long time.

“He’s seen and dealt with every kind of pass rush and stunts. Pretty much everything you have to throw at him, he has seen. He has weathered the storm on every occasion.”

Dealing with Ray, and containing rookie running back James Wilder are essential if the Stampeders hope to defeat the Argonauts in Sunday’s 105th Grey Cup presented by Shaw.

The seemingly ageless Ray threw for over 5,500 yards and 28 touchdowns in leading the Argos to first place in the East with a 9-9 record. Wilder galloped for 872 yards and five touchdowns on 122 carries. His average of 7.1 yards a carry led the league.

“With him (Wilder) and Ricky Ray, it’s like a two-head tiger,” said Davis. “It’s hard to just key on one guy because you know you got the other guy waiting to get his chance to get at our defence.”

Calgary (13-4-1) allowed 349 points this season and limited teams to 314.7 yards a game, both league lows. But, as the Stampeders learned in their upset 39-33 loss to the Ottawa REDBLACKS at last year’s Grey Cup, season statistics mean little in a one-game showdown.

The Stamps trailed 27-7 early in the third quarter of the 104th Grey Cup before coming back to force overtime. It’s some history they don’t want to repeat this year.

“We were a punching bag last year when we first started the game,” said safety Joshua Bell. “We were kind of catching instead of attacking.

“We may be attacking a little too much this year.”

The thing about Ray is he is deceptive. Fast, agile, elusive are not words used to describe the 38-year-old native of Happy Camp, CA. He won’t beat you with his legs and doesn’t have a cannon for an arm.

Still Ray has thrown for over 60,000 yards and 324 touchdowns in 15 CFL seasons. He’s also been on three Grey Cup winning teams.

“Regardless of what the score is, how much time is on the clock, you can never count him out until the clock strikes zero.”

The Saskatchewan Roughriders earned themselves a chapter in the Ray history book in last weekend’s Eastern Final. Trailing by three points with under three minutes left Ray marched the Argos 68 yards, completing seven of eight passes for a 25-21 victory.

One of the things that separates Ray from other quarterbacks is his ability to get rid of the ball quickly. On a three-step drop, by the third step he’s throwing the ball in rhythm. The same is true on a five-step drop.

That doesn’t give someone in pursuit much time to catch Ray.

“He’s the kind of guy that frustrates you,” said Davis. “He knows you’re coming. For some odd reason he always finds a way to get the ball out just in time before taking that big blow. And he delivers a missile right on point.

“He been doing it for so long. Most defences he knows where their strengths and weaknesses are at. He has a pinpoint where he wants to go with the ball before the play even snaps.”

To beat Ray, you must slow the game down around him. Disrupt his receivers early so he can’t hit them with quick passes. If Ray starts bouncing around in the pocket, it also causes him to lose momentum on his throws.

“You have to try to keep him off balance, keep him guessing,” said Davis. “If not, he will sit back and pick you apart out there.”

Like any quarterback, the more protection Ray has, the better his plays.

Right tackle Chris Van Zeyl knows the offensive line will have their hands full with Hughes.

“You have to stay on him,” said Van Zeyl. “You’ve got to be patient. He’s one of those savvy vets.

“He is one of those guys you have to pay attention too. I know they have schemes to get him free. You just have to stay on your feet and hope our schemes beat their schemes.”

Wilder, the CFL’s Rookie of the Year, adds another dimension to the Argo attack. The six-foot-two, 232-pound Tampa native combines power and speed. He can run around you or over you.

Wilder had 14 carries for 52 yards in the win over Saskatchewan.

“I know how hard it’s going to be on Sunday to try and bring him down,” said Davis. “He’s not a guy who you are going to be able to tackle with an arm tackle.

“You have to gang tackle. Everybody has to be in their gaps. You have to hold on until the other guys come.”