Cauz: Can anyone make sense of Sunday’s Grey Cup shocker? 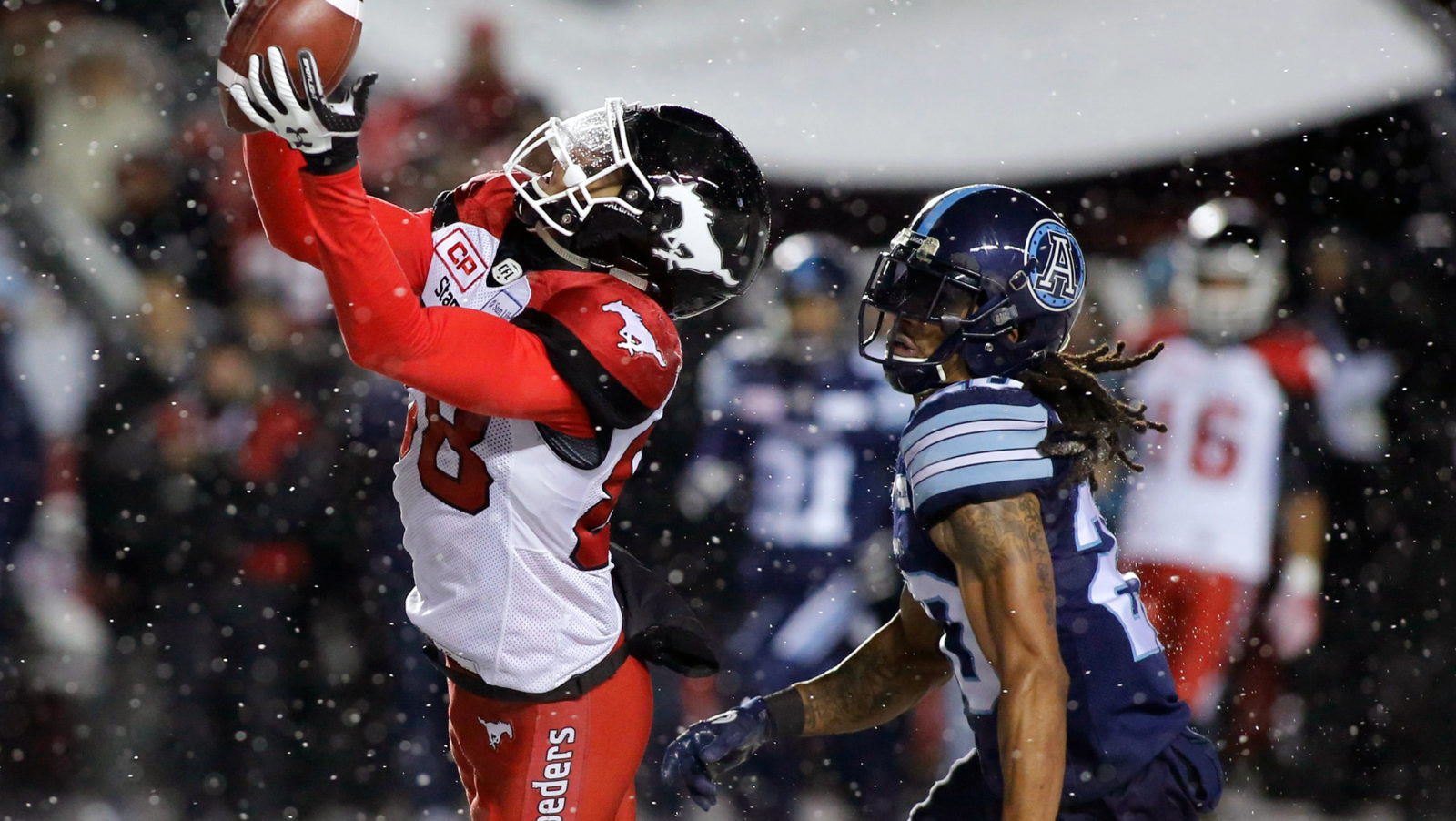 Cauz: Can anyone make sense of Sunday’s Grey Cup shocker?

It’s two days after the Toronto Argonauts’ stunning 27-24 Grey Cup victory over the Calgary Stampeders and I still don’t know how to properly sum up what happened.

On the simplest level, you could say the 105th Grey Cup resembled the 104th. In both cases we witnessed an East Division team led by an aging quarterback upset a heavily favoured Calgary team by one score in a game that was up for grabs right till the end. But of course that is where the similarities end. Championships of this sort of magnitude are difficult to put into proper perspective so soon after, so instead of giving some sort of grand summation, a task I am woefully unequipped to handle, I thought I would lay out what I think to be true as it relates to the Argonauts’ crazy win.

I know that the Stampeders were the better team, but they got beat because Toronto managed to do something that has never happened in the 105-Year history of the Grey Cup, executing two touchdown plays of a hundred yards or more. Please do not take this last sentence as a slight against the Argonauts. Both these statements can be true: Calgary outplayed Toronto AND Toronto is a deserving Champion. 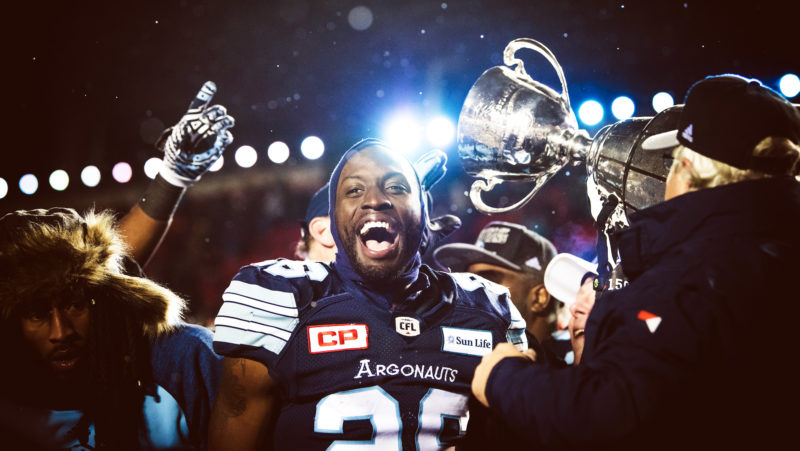 Cassius Vaughn celebrates with the Grey Cup. His 109-yard fumble return touchdown was a key play in winning the 105th Grey Cup (CFL.ca)

Dave Dickenson’s team outgained Toronto and held the ball far longer, all the while generating 14 more first downs. By both statistical measurements and by the eyeball test, Calgary was the “better” team. On the flip side, Toronto managed to always stay in the game and, when opportunity presented itself, the Argos pounced every time. Put simply, the Argonauts never gave up.

As for those two big plays, I know the Argonauts would never have won the game without them. What I don’t know is which play was more unexpected: the 100-yard touchdown reception by DeVier Posey or the 109-yard fumble return by Cassius Vaughn. The quarterback narrative coming into the game was that Ricky Ray is the short passer and that Bo Levi Mitchell is the one who likes to attack downfield (More on that soon!). And this wasn’t a lazy storyline that is more cliché than fact. Derek Taylor from TSN broke it down. Ray was indeed the CFL’s shortest passer in 2017, so of course he throws deep to a receiver who had a couple drops a week earlier for the biggest offensive play of the game.

If you subtract that one play, Toronto has fewer than 30 yards of offence in the first half and is staring at a double-digit halftime deficit. That play was, of course, no fluke, as Ray’s accuracy was impeccable and Posey managed to beat one of the game’s best in Tommie Campbell, but it was unexpected. As for the Vaughn fumble return, that may be the single biggest game-turning play in the history of the Grey Cup. Yes, I am going full knee-jerk reaction, prisoner of the moment, but you find me a better example. The one that comes to mind is the Taylor Reed illegal blocking penalty that nullified a 90-yard punt return touchdown by Brandon Banks that would have given Hamilton a late lead over Calgary three years earlier.

The Kamar Jorden fumble represented the absolute worst case scenario for Calgary. The Stampeders were a yard away from going up 31-16 with five minutes left in the game if Jorden had held onto the ball. But even if Jorden had fumbled the ball away with no return, Toronto’s offence would have been forced to go 109 yards trailing by eight points. Everything had to break right for the Double Blue to turn a potentially 15-point deficit into a 24-24 tie, and at that moment it did.

I know that we haven’t seen a return touchdown like Cassius Vaughn’s since Chuck Hunsiger fumbled the ball away to Jackie Parker, who returned it 90 yards for the winning score for the Edmonton Eskimos as they beat Montreal 26-25 in the 1954 Grey Cup. How do I know this? Because I was sitting next to my 85-year-old father, who was at that game and he told me that story. My dad was a statistician for the Fog Bowl in 1962 and the first Grey Cup he attended was back in 1944.

This all goes to my bigger point, and it’s a bit hokey, but I know that the Grey Cup has a way of entertaining people who don’t normally follow the game. I watched the Grey Cup with a couple of my bothers at my Dad’s place. It could not have been more stereotypical with the homemade chili, but I did mix it up by bringing some Ontario wine to the party — I ain’t bringing no Bordeaux to such a Canadian event. My brothers don’t watch as much sports as they used to; kids, family and a mortgage will do that to you. I had to explain who many of the players were and remind them that no, that receiver was not offside. But hearing them go absolutely nuts on the two big Argo touchdowns, you would have assumed they regularly paint their faces blue as they listen to old bootleg cassettes of the Argonotes. It was kind of cool to see up close.

I know that every member of the Calgary Stampeder organization and every Stamps fan is hurting today. This was supposed to be the redemption game. This is an organization that builds a winning team the classic way, through smart acquisitions and careful player development. They find and groom stars and have been dominating the league for a decade. Toronto was a mix of castoffs and new parts that was put together in March! What was supposed to be the coronation of Calgary turned into a referendum of just how damn talented Jim Popp and Marc Trestman are, and reminder to never bet against Ricky Ray in a big game.

I know that every Grey Cup should be played in snow. Of course this comes from someone who watched the game next to a roaring fire, but isn’t football just more fun when the field is covered in snow? I loved watching Cleyon Laing slide into the snow after his first-quarter sack. Even when the game went through stretches of incompletions and punts, the snow always had a way of making the game more intriguing even when the actual play left you wanting more. Can we find a way to schedule the game every year where we’re guaranteed at least 6-12 centimeters?

I know that I won’t be judging any of the words spoken by any of the Stampeders soon after that loss. That was as agonizing a defeat as you will ever see. I appreciated the moment of honesty that came from Marquay McDaniel when he spoke about the mistakes made on the field. We always want our athletes to be honest and when one is, we often criticize. After coming so close to ridding the demons of 2016, I give a full pass to anyone on Calgary who has a moment of unchecked emotion.

Finally, I know that it was a mistake by Bo Levi Mitchell on that end zone interception but I’m not going to crucify him for it. Yes, the smart play was to keep things conservative — his team was in field goal range so there was no need to go deep. But in an era filled with 75 per cent completion rates and check downs, I like my quarterback who is unafraid and will challenge an opposing secondary. That Matt Black interception will hang over Mitchell just as his three picks last year against Ottawa will now be a part of Mitchell’s legacy, and they should be.

But it’s not as if Mitchell is a turnover machine; his 115 touchdowns to 45 interceptions tell a different story. Yes, it is fair to question Mitchell and the rest of the team for coming up short twice as the heavy favourite, but remember, it took one of the greatest games ever by a quarterback to beat Calgary in 2016, and this year their loss came at the hands of two unprecedented touchdown plays that covered 209 yards.

For Toronto to defeat the greatest regular season team in league history, the Argos needed to make history in the Grey Cup and that is exactly what they did. Congratulations to the Argonauts for an incredible turnaround season. The entire franchise deserves so much credit for rising up from a disastrous 2016 and reaching the ultimate goal. Now I look forward to watching Calgary trying to bury its past in 2018.