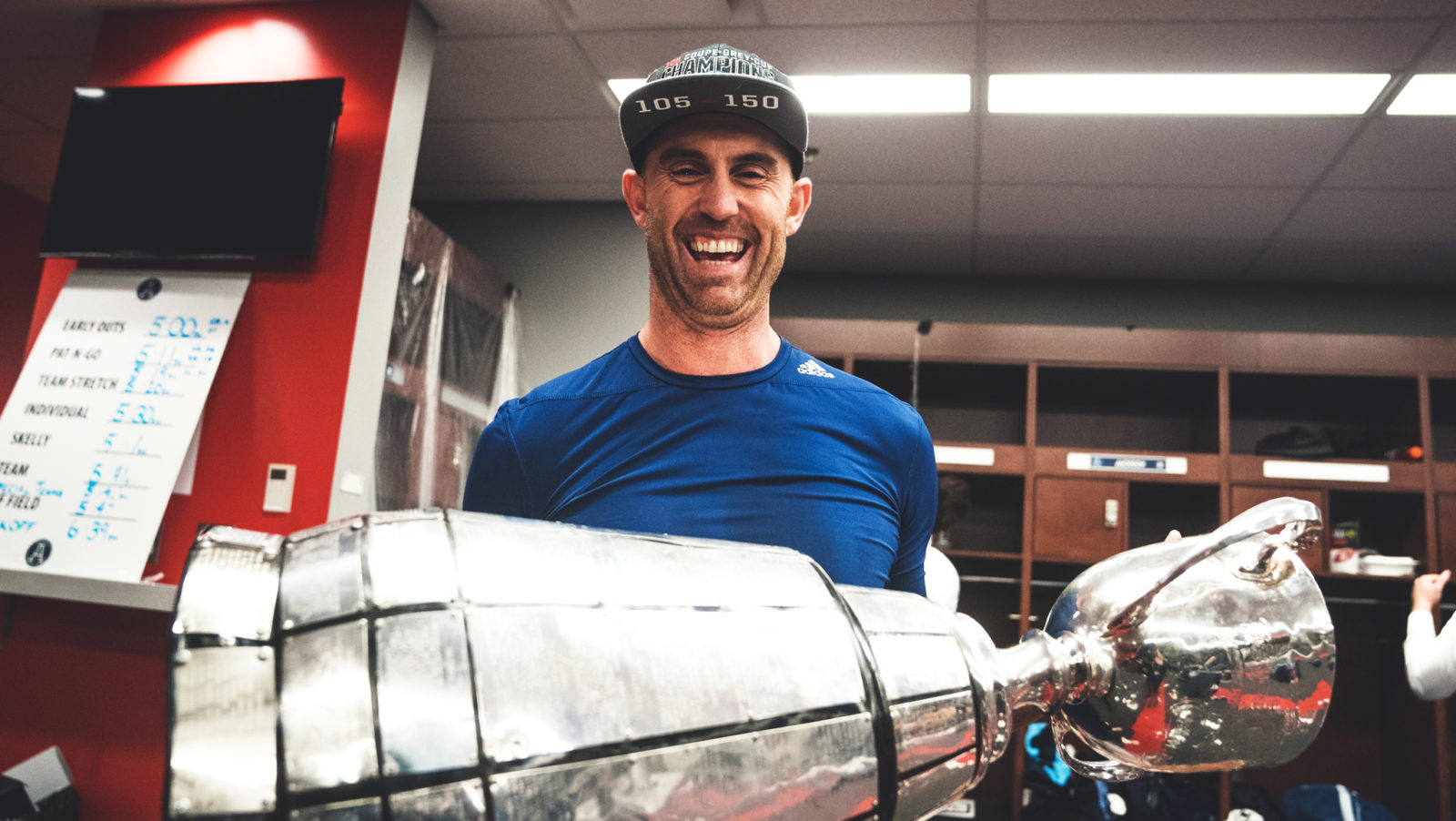 The game had only been over for about 10 minutes, but the field at TD Place already felt like the floor of a bar at 3 a.m. Everywhere you went, there was tape under your feet, beer cans and water bottles, shreds of blue and white confetti.

To watch a team celebrate a Grey Cup win is to catch almost everyone associated with it in a moment of peak physical and emotional exhaustion. Players’ wives had tears frozen to their faces. Mothers asked their sons to re-affix entrance wristbands to them because they were too cold to do it. After almost four hours of being in a wet, heavy snowfall, Argos’ O-lineman Will Campbell walked shirtless through the crowd. Cassius Vaughn was in the process of losing his voice, telling anyone that would listen to the man with the game-changing 109-yard fumble return touchdown that Calgary had choked.

In the middle of it all, Ricky Ray, now a four-time Grey Cup Champion, was there in the crowd, the only one that looked like he always does.

It’s not that he wasn’t happy. He let the win wash over him, how everything changed so quickly on Vaughn’s goal-line recovery. A 24-16 deficit became a 27-24 lead in 4:23, with just 53 seconds left. It was the Argos’ first and only lead of the game.

“It’s just…,” Ray said, trailing off momentarily while sitting with TSN’s James Duthie and Henry Burris, before he exhaled. “I’m in awe, man, probably like everybody else.”

As the post-game celebration showed — especially in the locker-room, where the champagne flowed and the music blared through the Argos dressing room — football is a loud, aggressive game. Ray is in every way the opposite of that but has thrived in the game for the last 15 years.

“He’s a competitor. He’s a very quiet guy but he’s one of the toughest human beings you’ll ever be around. He has this silent presence about him, a confidence,” Argos GM Jim Popp said of Ray.

On Sunday night, Ray became the first starting quarterback to win four Grey Cups in CFL history. He’s faced questions his entire career. In the early days he was too quiet, didn’t lead well enough. When he was traded in December, 2011, the premise was that his best days were behind him and he wasn’t mobile enough. The Grey Cup win in 2012 gave some pause to the criticism, but with every hurt shoulder, every twisted knee, a partially deflated lung(!) people were waiting to pull the curtains on a magnificent career.

“It gets tiresome sometimes, always having to answer those questions and think about that,” Ray said.

“I’ve been through a lot, though. I’ve had so many people help me out. (Scott) Milanovich sticking with me through all the injuries. Then (Marc) Trestman giving me an opportunity too. So many guys. I wouldn’t have had the chance to battle back with what I went through without them and I’m thankful to those guys so much for giving me opportunities and getting to this spot right here.”

There was a misfit island kind of charm to this year’s Argos’ team. They ended the 2016 season with five wins and the label of the least desirable destination in the league. Popp and Trestman came in on Feb. 28 and they had more than 40 new players in uniform when training camp started in June. They embraced that and in a way at the centre of it was Ray, one of the greatest but frequently questioned QBs the CFL has ever seen.

“Ricky drives this team by being Ricky,” said S.J. Green, who Popp traded for after Green suffered a season-ending knee injury last year.

“He’s a Hall of Famer in the making. He’s an all-star, he’s a four-time Grey Cup champion right now. The way he approaches every day is leadership in itself. We see that and we follow Ricky. He’s the leader of this team. You see why.”

Green heard his share of questions going into this year, if a 32-year-old receiver could come back without losing a step. He had the best season of his career and finished second in receiving. He can relate to what Ray’s gone through.

“All of us go through adversity at some point,” he said.

The only question that hangs over Ray now is how long he wants to do it. He shied away from the question on Sunday, even when he sat next to Burris, who had that picture-perfect ending to his career in Toronto a year ago.

Popp almost laughed out loud when he was asked once again if he wanted Ray back next year.

“How much do YOU think he has left,” Green asked. “I think he could play two, three more years. Four, five, whatever he wants to do. It’s just a matter of what’s going on in his head.

“I know this is a special moment for Ricky and I know he’ll go home and talk with his family and do what’s best for him and his family. I’d love to have Ricky here again. This has been a magical season.”