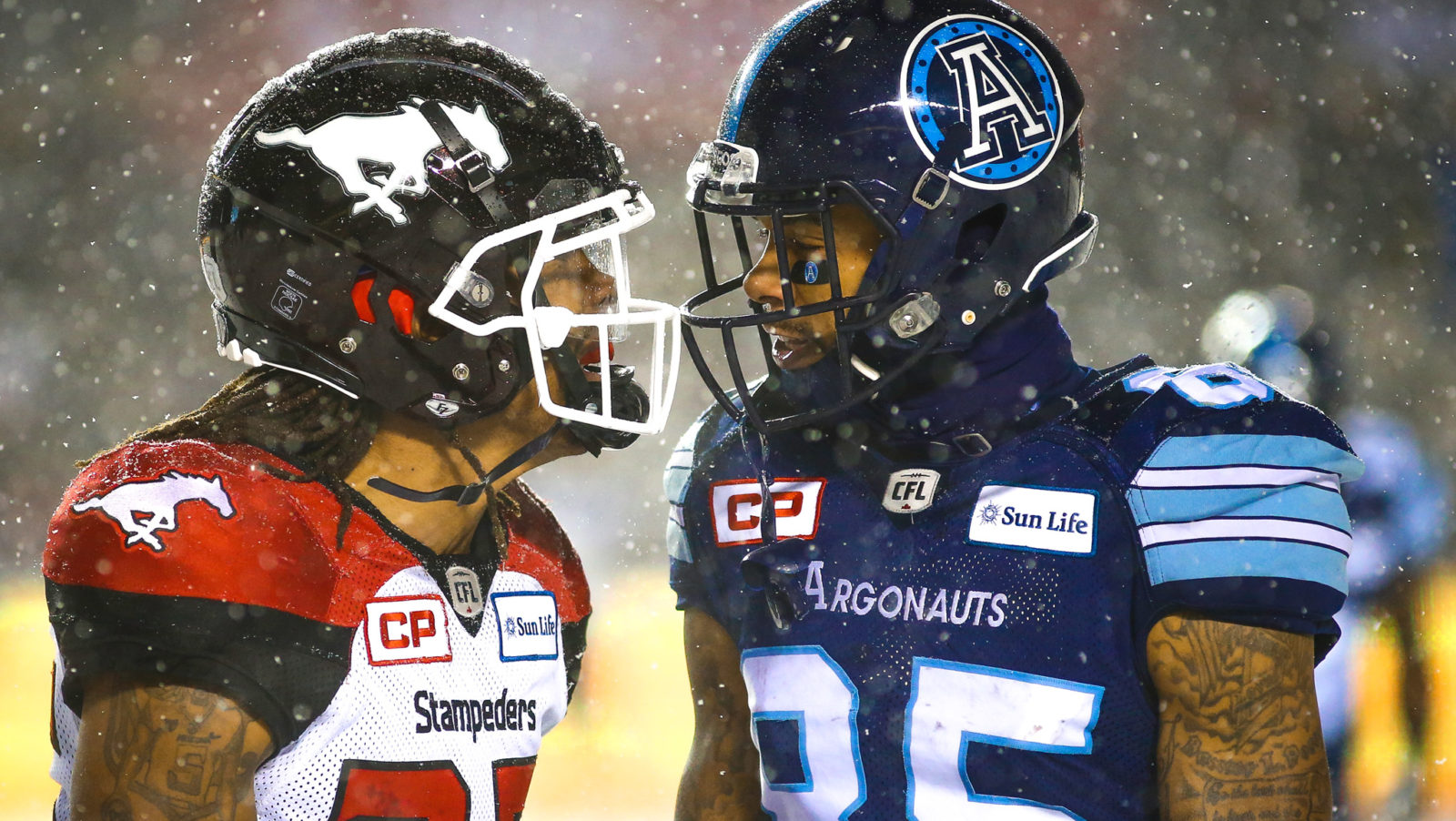 Hello, Shania Twain. That impressed me. Much. A good, high-energy halftime set was great to see. But you won me over before you even sang a note. Arriving by dog sled? On this night? Slow clap for you. Slow, muffled clap of a man wearing big ski-doo mitts. Here’s to ya. (Chugs an entire bottle of maple syrup and spikes the empty into the campfire)

Here are the Grey Cup takeaways.

1. IT’S ALL ABOUT THE SHOES

Nothing against receiver DeVier Posey. Had a whale of a game, including a Grey Cup record 100 yard touchdown reception. But dang it all, once – just once – I’d like to see an equipment manager get MVP. Argos’ long time footwear wizard Danny Webb would be the guy. He helped the Argos deal with frozen ground in Winnipeg in 1991 and with a blizzard in Hamilton in 1996.

He also told the team to wear the footwear he’d chosen for the 2017 game, as the snow started to pile up before kick-off. They, mostly, balked. By halftime, the Argos were down plenty and getting all the traction of one of my many failed screenplay ideas. They relented, went with Webb’s suggestion and then started to look like mountain goats in the second half. Just one question: Who do you want to play you in the movie, Danny? I’m working on a screenplay and it can’t miss.

2. OTTAWA, YOU HAD ME AT HELLO

The 2004 festival was terrific. The 1988 version, was a stunner, coming off a season where the home side had just finished a 2-16 regular season. I have a soft spot for that one because it was the first Grey Cup I ever covered. (Memo to all staff at CFL.ca: Did I tell you that I caught the winning touchdown in the media game on Parliament Hill that year? Oh, I did? Alrighty then)

I’d seen the great spirit of the Ottawa football community on television, with REDBLACKS Nation spearheading a crazy comeback of Ottawa football fever. I wondered what that might be like as it spilled over into the organizing committee’s plans and the result was a predictable sensation. Fabulous week, superbly organized by the hosts, energized by fans from all over the country. Then, the fates rewarded with a snow globe Grey Cup game with a fight to the finish. You kidding me?

Bravo, Ottawa. Thank you. And thank you, CFL fans. As I watched the snow accumulate on your toques and parkas as you sat in the stands, I thought “God, I love these people.”

3. THE BALL FINDS THE PEOPLE IT LIKES

That was the pearl of wisdom dropped by Toronto defensive back Cassius Vaughn, who’d turned the game around with a Grey Cup record 109-yard fumble recovery touchdown with less than five minutes to play.

The ball also liked Alex Singleton, who recovered a Roy Finch fumble on a punt return. It had mixed emotions about Juwan Brescacin, escaping from him after a reception, only to feel regret about that and allow a reunion moments later. I did not know that a football actually had free will, which is a great thing, of course. Be warned, though, football. If you have free will you also have the burden of responsibility and can even feel guilt.

4. DON’T THROW THAT BALL IF SOMEONE ELSE’S STORYBOOK ENDING IS IN THE AREA

Quarterback Bo Levi Mitchell didn’t have that, though, as receiver Marken Michel hadn’t beaten Toronto corner Jermaine Gabriel cleanly on the play and safety Matt Black had started to rotate over. Black, who’d been cut by the Argos earlier in the year, got the ending he wouldn’t have dared dream of, when he pilfered the pass, sealing the deal. Mitchell had an outstanding night, otherwise. But if he throws that out of bounds, kicker Rene Paredes very likely kicks the Stamps into a tie and a shot at winning in overtime.

5. I CAN TAKE A PUNCH FROM SHAWN LEMON

As Black wrapped up one interview and was turning to answer a few of my questions, defensive end Shawn Lemon raced over to congratulate him. As he did so, he caught me with a solid left as he came in for a high speed, macho man hug and he didn’t even notice the contact as he grabbed his teammate. But I noticed. Boy, howdy, did I. Good one, right on the chin. That stung a bit and my knees shook a touch and I took a step or two back but I did not go down. I repeat: I DID NOT GO DOWN. Then, I turned to Black and said “I just took a punch from Shawn Lemon and did not go down.” Black looked at me like “I don’t know what you’re talking about, we just won the Grey Cup, so….” That was not an unreasonable response. Anyway, hope you don’t mind, folks. I had to tell somebody.

Actually, I’ve been telling everybody. Say, that reminds me. I ever mention the time I caught the winning touchdown pass in the media game on Parliament Hill?

Feel for Kamar Jorden, don’t vilify him. He’s a marvellous player and he was victimized by a hell of a blind side play by Toronto defensive back Jermaine Gabriel. Mike Reilly tweeted some support to him. I’ve felt like Kamar Jorden before, I think. Ain’t we all? So now I wanna be like Mike.