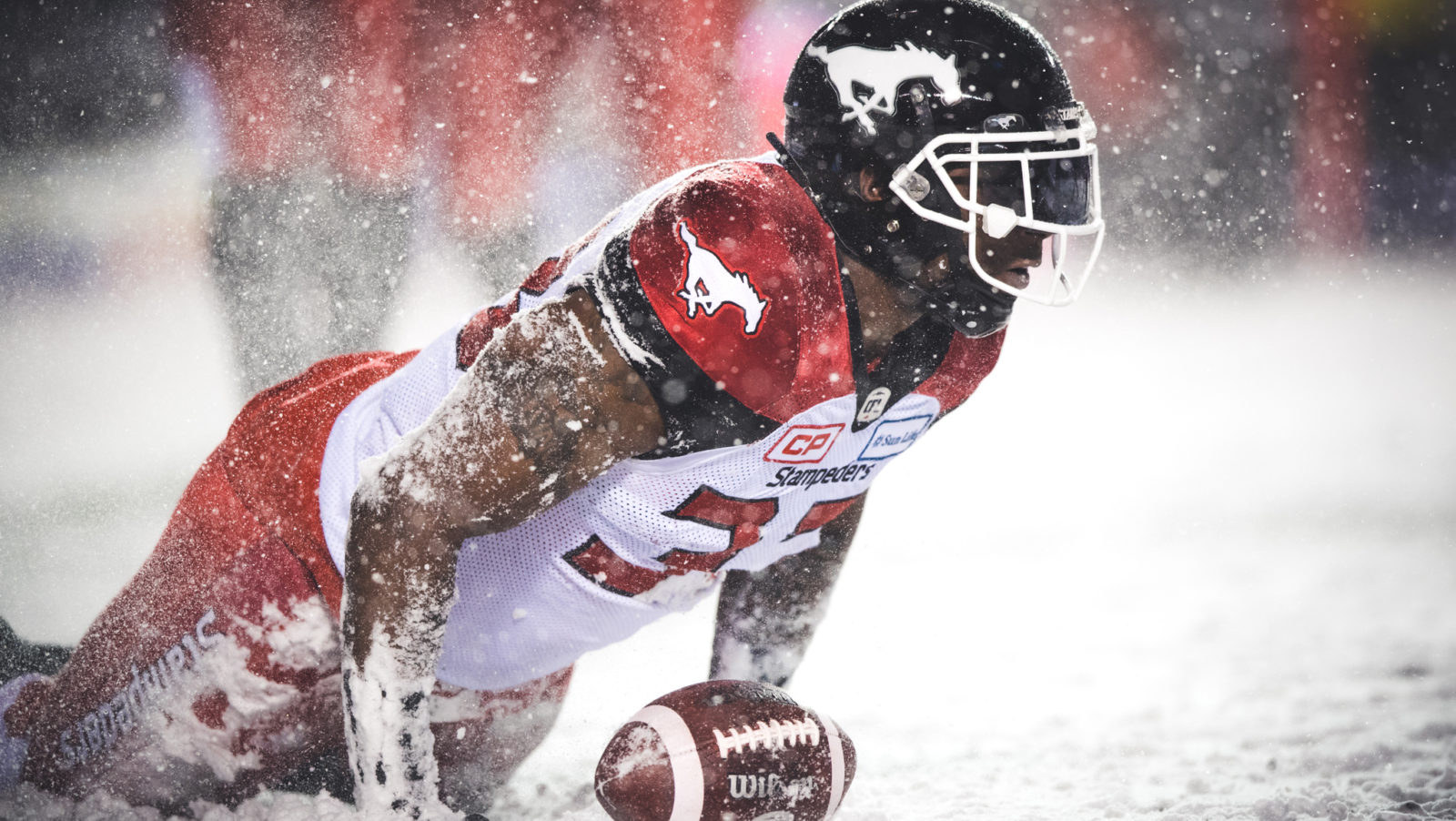 How do you approach an off-season to try and win just one more game? That’s the question faced by the Calgary Stampeders for a second straight year after another heartbreaking Grey Cup loss.

Determining the answer, however, has already proven to be extremely difficult.

Here’s the problem: the question I pose really doesn’t have an answer, because it’s not really a fair one. More than anything else, there’s just no guarantee the Stamps will be back in next year’s Grey Cup, so making decisions based on that assumption is dangerous. Instead, Calgary needs to focus on the bigger picture and focus on improving overall.

I’m based in Calgary, so I’m acutely aware of how frustrated fans of this team are right now, and I get it. But to suggest the team needs to be torn down and rebuilt makes no sense to me, especially when you remove emotion from the equation.

Despite crippling losses to end the last two seasons, let’s not forget the Stampeders have still been the head and shoulders class of the CFL for two straight seasons. Titles are ultimately what we base success on, and that’s fair. That doesn’t mean, however, what Calgary has accomplished the last two years should be completely ignored, either. 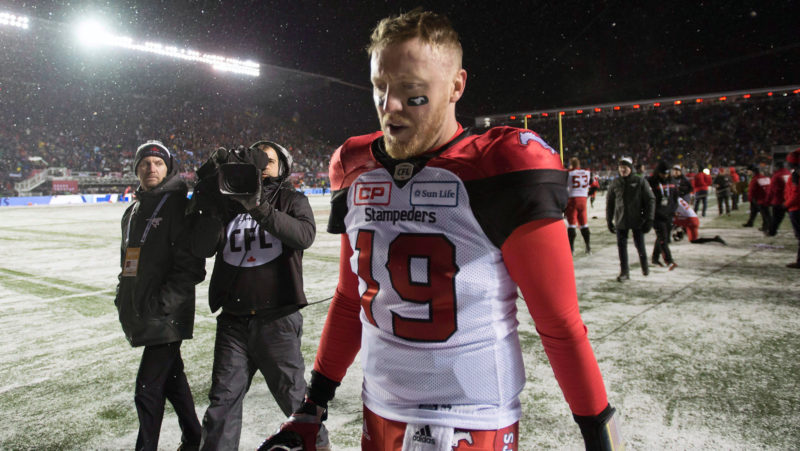 There are numerous things the Stamps need not change this winter. Quarterback Bo Levi Mitchell made one decision in this year’s Grey Cup loss to Toronto; in some circles, whether or not his final pass was a bad decision is even up for debate. The reality is, though, Mitchell is one of the league’s elite pivots and has a 2014 title to his name already. Yeah, he’s 1-2 in Grey Cup games as a starter, but he’s still right at the top of the list of money quarterbacks.

Jerome Messam leads the list of Calgary’s cornerstone offensive playmakers and is coming off another stellar Grey Cup performance. I’d go through a list of receivers, too, but I’m not sure that makes sense; because of their scheme and quarterback, the Stamps pump out productive pass catchers like no one else.

Defensively, Calgary was on point all season long, led by as dominant a defensive line we’ve seen in years. Charleston Hughes and Micah Johnson are both back next year, which, along with linebacker Alex Singleton, is enough to feel confident in another solid Stamps’ defensive unit in 2018.

For Calgary to panic and make drastic changes to their personnel group would be unwise. This team has a group of core players to build around that most teams envy, even if their record in Grey Cup games leaves something to be desired. In saying that, though, the Stamps still need to take a good, hard look in the mirror this off-season.

In their last two Grey Cup losses, we’ve seen a number of things happen on the biggest stage. In some cases, players have made key mistakes at crucial moments. In other instances, generally consistent and reliable players have turned in performances well short of expectation. Regardless, it’s tough not argue the bright lights of the year’s biggest game took their toll.

There are a few questions I’d be focusing on this winter if I’m General Manager John Hufnagel. What players truly let the pressures of the league’s biggest stage get to them? Is there a pattern of that happening with some of these players? And are there players they can target who can fit into their scheme while also helping fix those issues?

In the end, I’ve gone from posing an impossible question to answer to three extremely difficult ones. No one said winning was easy, though.

Making things a little more complicated is a cloudy future, both on the field and on the sidelines. We’ll start with the latter, because I’ll be somewhat surprised if DeVone Claybrooks is back as Calgary’s defensive coordinator in 2018.

The man known as Biscuit has been on a rocket-like rise since ending his playing career following the 2011 season. If that rocket ship were to land on a head coaching job this off-season, I don’t think anyone would be surprised.

After three years as Calgary’s defensive line coach, Claybrooks has overseen the league’s most devastating defence the last two years. Now reports suggest he’s the leading candidate to take over Montreal’s vacant job at head coach. It’s something to keep an eye on, although I wouldn’t consider it a foregone conclusion.

The only reason I say that is by looking at the route his boss the last two years took. Current Stampeders head coach Dave Dickenson was a hot head coach commodity for a few years but elected to remain the team’s offensive coordinator.

Dickenson had reason to believe he would be Hufnagel’s successor even prior to that being confirmed, which carried some weight. But staying in a winning environment played a huge part, too. Calgary’s annual success is a tough thing to walk away from, even if it means staying in a lower position.

On the field, the Stamps have a star-studded list of pending free agents to take care of, and numerous impact players in the defensive backfield head that agenda. It’s unlikely all of Tommie Campbell, Josh Bell, Ciante Evans, Shaq Richardson, and Brandon Smith will be back in 2018.

Offensively, we’re talking about big-time names like Messam, DaVaris Daniels and Kamar Jorden all up for new deals. All in all, Calgary has 27 free agents to make decisions on, which isn’t all that different from the situation they faced one year ago. Last winter saw the team bring back a good number of its free agents, so we’ll see what Hufnagel gets done this time around.

Complicating matters further is the NFL, though. As 3DownNation reported last week, the aforementioned Richardson and Daniels have received invites to work out for teams south of the border, along with one player we haven’t mentioned yet.

2017 Most Outstanding Special Teams player Roy Finch completes the trio garnering significant NFL interest. Finch was an absolute game-breaker on the return side this season and, as we saw in the playoffs, made a huge impact as a running back, too. The loss of Finch would be a tough one to swallow for Calgary.

The raw facts over the last two seasons tell different stories for Calgary. On the one hand, the Stamps have been far and away the CFL’s best team since the start of the 2016 campaign. On top of appearing in back-to-back Grey Cup games, they’ve won 28 regular season games, seven league awards and have earned 16 CFL All-Star nods. No other team has come anywhere close to equaling that type of regular season success.

On the other hand, though, Calgary just hasn’t gotten the job done when it matters most. Whether you classify it as choking, crumbling under pressure, bad luck or all of the above, the Stamps have come up empty in the category that matters most. When you expand the picture even more, Calgary has appeared in four of the last six Grey Cup games with only one win, and that’s hard to swallow.

Both stories told carry merit and need to be taken into account by this team’s braintrust this off-season. Striking the balance of change and status quo in an attempt to crest the CFL’s most important peak looms as one of the most difficult team challenges I can ever remember.