The Ticats and Riders announced Wednesday they’ve agreed to a trade, sending the veteran quarterback to Saskatchewan in exchange for a second round pick (10th overall) in the 2018 CFL Draft.

The deal ends Collaros’ time with the Ticats after four seasons as the team’s starting quarterback. Over that time, the 29-year-old threw for 11,342 yards with 66 touchdown passes and only 32 interceptions, leading Hamilton to a Grey Cup appearance in 2014. 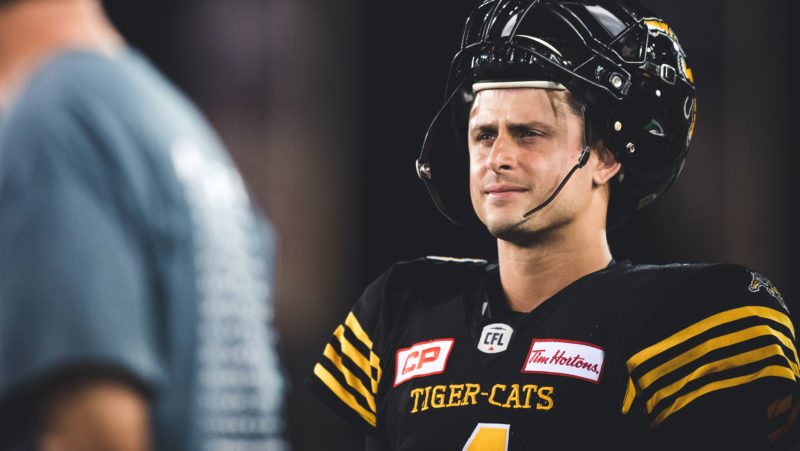 Zach Collaros has been the topic of trade speculation since last Labour Day (Johany Jutras/CFL.ca)

For many, the writing has been on the wall since Collaros was benched in favour of Jeremiah Masoli going into Labour Day. After an 0-8 start, the Ticats replaced Kent Austin with June Jones on the sideline and also made the change under centre, going 6-4 the rest of the way.

Last season was Collaros’ worst as a starter. In eight starts, the Cincinnati product threw for 1,767 yards, eight touchdowns and seven interceptions.

“I am happy for Zach to land on his feet with a chance to be on a good team that can compete for a championship, and not a rebuilding situation,” said June Jones, head coach of the Tiger-Cats. “As I said during the season, Zach was put into a difficult situation, as was I, and he handled himself as a true pro. He came to work every day and tried to be the best he could be.

“Zach was an asset to me and our team in the areas he could control,” Jones added. “There is no question in my mind had he gotten his chance again to play for me, he would have been successful. I saw enough in practice and witnessed his work ethic to know he is a tough kid and a winner.

“As I told him, this is a business. Zach understands the game, and the business. I wish him all the best and so does everyone in our organization.”

Masoli, currently without a contract going into free agency on Feb. 13, remains the most likely option to start for the Ticats in 2018. But plenty of talk has also surrounded former NFL first round draft pick and Texas A&M star Johnny Manziel.

Last week, after a months-long process, Commissioner Randy Ambrosie and the CFL announced that the league will honour a contract agreement between the Ticats and Manziel should the two sides strike a deal. The Ticats have Manziel’s exclusive negotiating rights.

For the Riders, Wednesday’s trade likely brings clarity to the quarterback situation. While incumbent starter Kevin Glenn remains under contract and Brandon Bridge signed an extension last month, it’s unlikely Collaros was acquired to be a backup.

Still in his football prime, Collaros could be the long-term answer the Riders have been looking for.