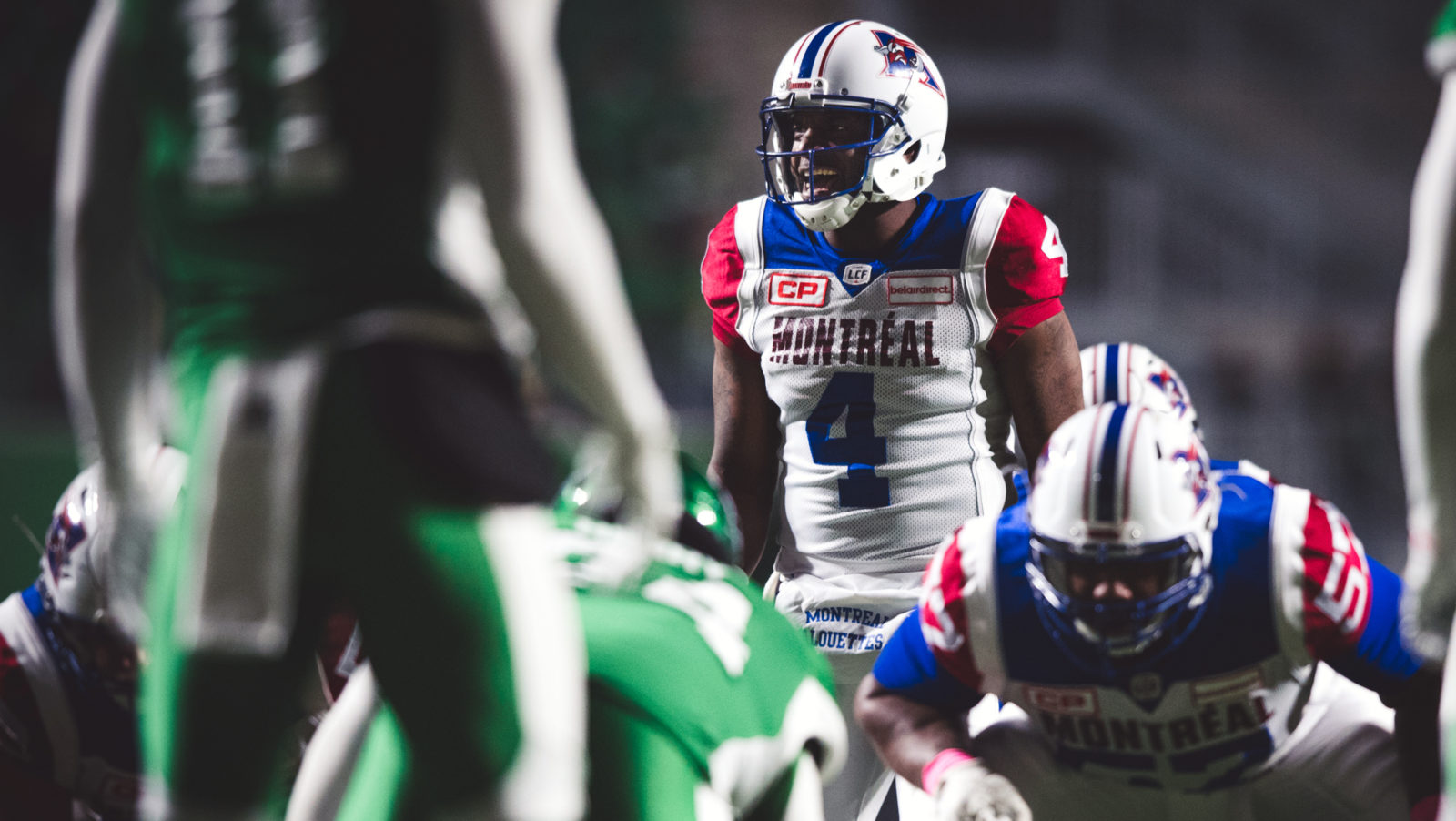 This CFL off-season has been one of the most eventful ones I can remember, and we’re still more than a month away from the opening of free agency.

The biggest highlights thus far are blockbuster deals involving a pair of quarterbacks: Zach Collaros and James Franklin. Both were big fishes this winter, but interestingly, neither player ended up landing in Montreal. That still leaves the Alouettes with a very important question without an answer.

That question, of course, is simple: Who is Montreal’s long-term answer at quarterback? Since Anthony Calvillo’s retirement at the end of the 2013 season, the Als have gone through a revolving door of quarterbacks trying to find their number one guy. That’s why I think this is still a major area the team needs to address in the next few months.

Unfortunately, while guys like Troy Smith, Jonathan Crompton, Rakeem Cato and Tanner Marsh all showed promising glimpses, no one was able to lock down the job on a permanent basis. That led to last winter’s acquisition of Darian Durant from Saskatchewan, which didn’t work out as planned in year one. 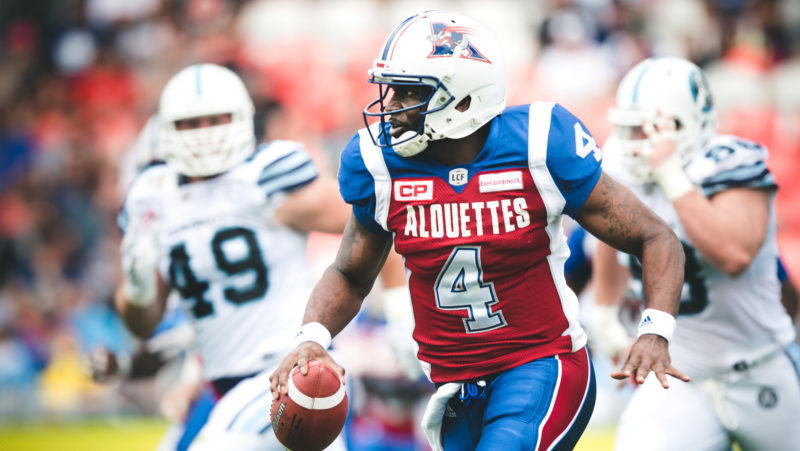 A highly-touted pickup for the Als, Darian Durant struggled in his first year in Montreal (Johany Jutras/CFL.ca)

While Durant was able to stay mostly healthy throughout the 2017 season, he finished with a negative touchdown-to-interception ratio for the first time in his career; Durant’s 16 interceptions were his highest total since 2010, his second year as a starter.

Of course, there’s a decent chance Durant bounces back this season. It’ll be his second year in Montreal, which should lead to an increased comfort level. If a more comfortable Durant can return to prior form, then we might be talking about a workable solution for 2018. But there are a few concerns for me here.

While seeing Durant bounce back is a realistic possibility this year, it’s also far from a guarantee. He’ll turn 36 about midway through the season and there are just as many players that see their performance drop off at his age as there are those who continue to excel. Rolling with Durant minus a viable secondary option is a risky play.

Furthermore, even if Durant does get back on track, we’re still not talking about Montreal’s big picture answer. It’s not a slight on any of the guys under contract, but Jacory Harris, Antonio Pipkin and Matthew Shiltz can’t be counted on to pick up the slack if Durant falters. Sure, one could surprise us and emerge, but the Alouettes certainly shouldn’t be banking on that.

Either one of Collaros or Franklin would have been a good fit in Montreal for the reasons laid out above, but that’s not going to happen now. That doesn’t mean General Manager Kavis Reed should give up looking for a long-term fix at quarterback, though.

Montreal has struggled with stability for the better part of five years, and a big part of that is thanks to a revolving door behind centre. After enduring their worst season since returning to the league in 1996, the Als are in dire need of some solid ground. Whether it’s via free agency or a trade, an important quarterback add is a must in the next few months.

Johnny on the spot

It wouldn’t have made sense for the Hamilton Tiger-Cats not to extend a contract offer to Johnny Manziel. After the league approved him for a contract, the Ticats had 10 days to tender Manziel an offer to ensure he remained on their negotiation list and, thus, their property. Sunday saw Hamilton do just that.

I fully expect Manziel and the Tiger-Cats to agree to contract terms prior to training camp and I think we’ll see the 2012 Heisman Trophy winner in black and gold this season, even if it’s just on the sidelines. What happens after that is where it really gets interesting, because it’s going to be a test in patience on both sides. 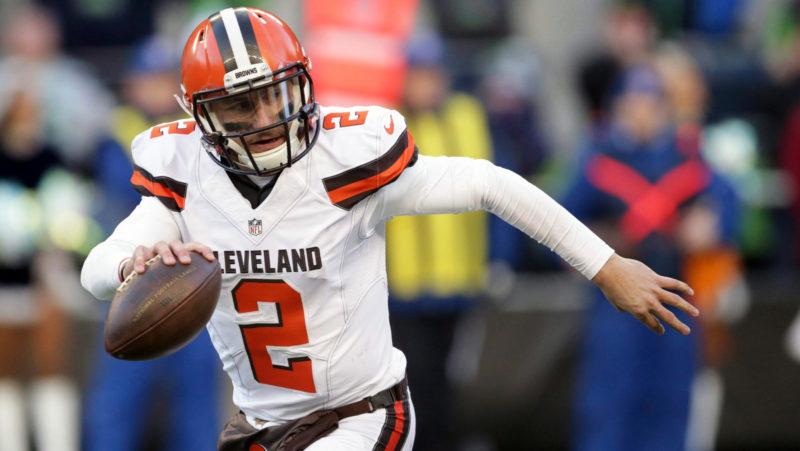 When we rolled out New Year’s resolutions for all nine teams last week, Hamilton’s was all about patience. For Manziel to have any semblance of success in a return to professional football, he can’t expect for everything to happen at once. Similarly, the Ticats and their fans shouldn’t be forecasting this as an instant success.

If Manziel wants this to work, he needs to enter the CFL with the right attitude, and that includes exercising patience. And remember, that means more than just waiting his turn. Manziel needs to earn his shot, because it’s not going to be given to him, regardless of how big a name he is.

That includes training at a high level over the next four months prior to training camp opening, working his tail off in practice, and truly learning from who surrounds him, namely Jeremiah Masoli. Remember, the newly signed Hamilton starter had to work his way to the top of the depth chart after an impressive college career, too; it’s taken Masoli five seasons to get where he is.

The Tiger-Cats need to be reasonable here, too. Manziel hasn’t thrown a pass professionally since the 2015 NFL season as a member of the Cleveland Browns, and as we all know, he has zero experience with the Canadian game. This is a hard league, and there are very few quarterbacks who excel right away.

But, sometimes patience can truly yield rewards. Manziel is one of the most naturally gifted players to come out of the NCAA in a long time, and talent like that doesn’t just disappear. If Manziel has the right attitude and if both sides come equipped with a steady dose of patience, I’ll be fascinated to see what Johnny Football brings to the CFL.

Is this the end of the line for Kevin Glenn? While we wait for the answer to the question, I can tell you I definitely don’t think it should be. One day after their acquisition of Zach Collaros, the Riders released Glenn, making the veteran quarterback a free agent come next month, and I think there is plenty of merit in picking him up.

Glenn will be 39 years old to start the 2018 season, so we have to be realistic here. At this stage of his career, Glenn isn’t going to be signed as a starter, and nor should he be. But to install him as a potential backup on team with that need makes a great deal of sense.

The experience Glenn brings to any locker room and offence he’s a part of carries value; after all, he’s been starting CFL games since 2001. His knowledge of the game and experience in all situations is an asset, as is his ability to serve as a mentor and great teammate.

For the sixth time in as many years, Kevin Glenn is changing teams in the spring. Don Landry reflects on Glenn’s continued journey across the league.

That ability was articulated extremely well by former teammate and Calgary Stampeders quarterback Bo Levi Mitchell last week. On his weekly radio show on Sportsnet 960, I asked Mitchell what Glenn could bring to his next destination.

“He’s a great locker room guy,” Mitchell said. “He’ll teach the young quarterbacks in training camp…he will definitely be a second quarterback coach. I can definitely see Kev being a guy that goes into coaching when it’s all said and done. He’s definitely a guy worthy of picking up for that reason.”

The first team that comes to mind for me is Edmonton, because the fit seems really strong. With James Franklin no longer in the fold, Mike Reilly is in need of a backup, and Glenn could fill that void. The fact it would also give Glenn the distinction of spending time with every single CFL organization is just a fun little side note.

Edmonton isn’t the only viable fit, though. What about Toronto? Especially if Ricky Ray decides to retire, Glenn would be a great mentor and sounding board for newcomer Franklin. Or, how about a return to Hamilton? Manziel or no Manziel, there would be absolutely nothing wrong with the Ticats having Glenn in the fold once again.

Seeing Glenn released by the Riders was definitely not unexpected, as that depth chart was just going to get too crowded. With numerous teams in need of filling out their depth chart for 2018, though, there’s no reason Glenn shouldn’t find work for an 18th straight season.