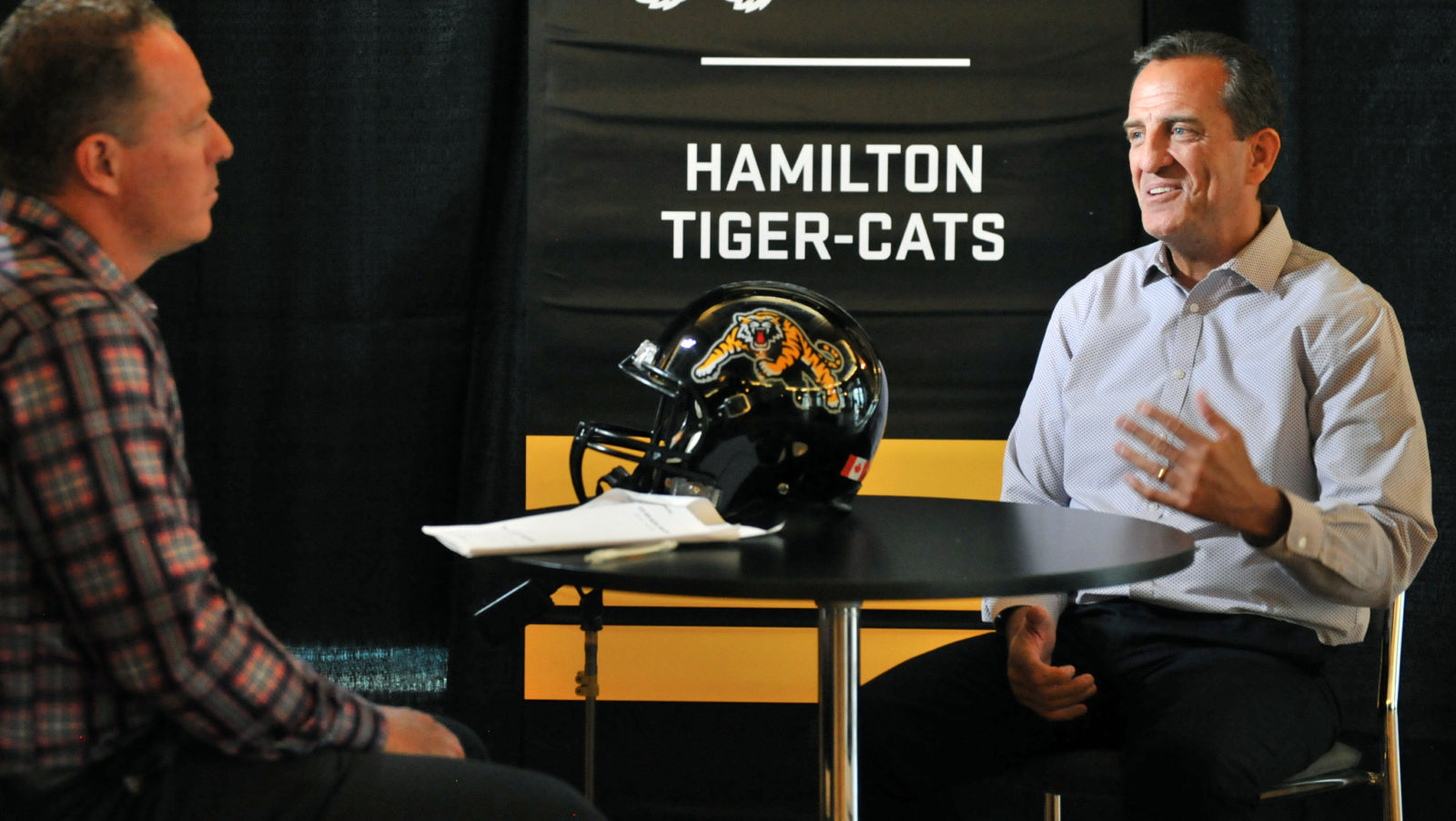 BANFF — From a 10th CFL franchise in Halifax to the latest on Johnny Manziel, there were plenty of topics discussed during Wednesday’s media day in Banff, Alta.

General managers and presidents from all nine teams along with Commissioner Randy Ambrosie gathered with the media on the snow-covered mountainside, breaking the monotony of the month of January with plenty of exciting tidbits about the CFL off-season and more.

Here are 10 things we learned from Wednesday’s proceedings:

1. A potential 10th team continues to lead the discussion, but Commissioner Randy Ambrosie is being careful not to force a timetable.

Ambrosie said the biggest issue blocking a possible expansion team is a new stadium, which he called ‘absolutely critical’ to a team coming to Halifax and having success.

“I think in that 27-28,000-seat range you are probably about right,” he said of a potential size. “You can be a little smaller, depending on your market, but when you get much bigger than that, it gets harder and harder to fill a stadium.”

The idea of a team in Halifax came to life nearly two months ago and has since picked up plenty of steam.

2. Darian Durant‘s future with the Als should be decided by Monday.

The clock could be ticking on Darian Durant’s time with the Montreal Alouettes. According to Herb Zurkowsky, Durant has been asked to either take a pay cut or be released before a major roster bonus kicks in on Monday.

This comes one year after the Alouettes acquired the veteran quarterback, who struggled in 2017 throwing more interceptions (16) than touchdowns (15). The thinking is that it doesn’t make sense for the Alouettes to pay Durant top dollar when new head coach Mike Sherman hasn’t committed to him as his starting quarterback.

Whatever happens in the coming days will go a long way in determining the Alouettes’ quarterback situation in 2018, which would look drastically different without the veteran Durant. 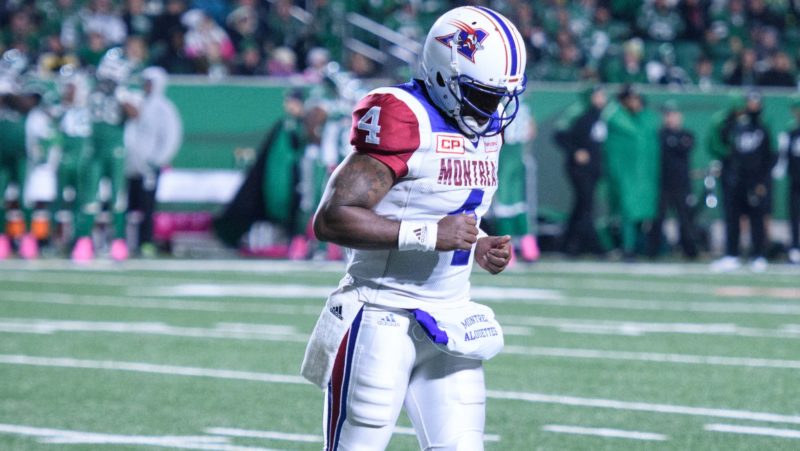 Darian Durant jogs off the field during a game vs. the Riders last November (Arthur Ward/CFL.ca)

3. Bo Levi Mitchell will go into the 2018 season in a contract year.

The Stampeders are confident they’ll be able to re-sign their star quarterback should his contract expire a year from next month, but it appears that a new CBA in 2019 could delay new deals beyond this year’s crop of free agents. It appears that also played a role in Trevor Harris‘ one-year deal, and could be an emerging theme for other players across the board over the next calendar year.

Mitchell signed a four-year deal before the 2015 season and has since played in two Grey Cups and won a Most Outstanding Player award.

4. Willie Jefferson isn’t going anywhere, but what about Duron Carter?

After getting a new quarterback in Zach Collaros, the focus in Riderville turns to the team’s top offensive and defensive players Duron Carter and Willie Jefferson — both pending free agents.

On Wednesday, Chris Jones confirmed that Jefferson isn’t going anywhere. The same can’t be said for Duron Carter, but Jones indicated there’s still a good possibility of a return, with mutual interest:

“He had a couple of NFL workouts that he turned down,” said Chris Jones. “He’s got a vested interest in trying to stay in our league. He enjoys our league. I certainly hope that we can get him back in our jersey.”

Carter and Jefferson were pillars of a successful 10 win season that saw the Riders make the playoffs for the first time since 2014. 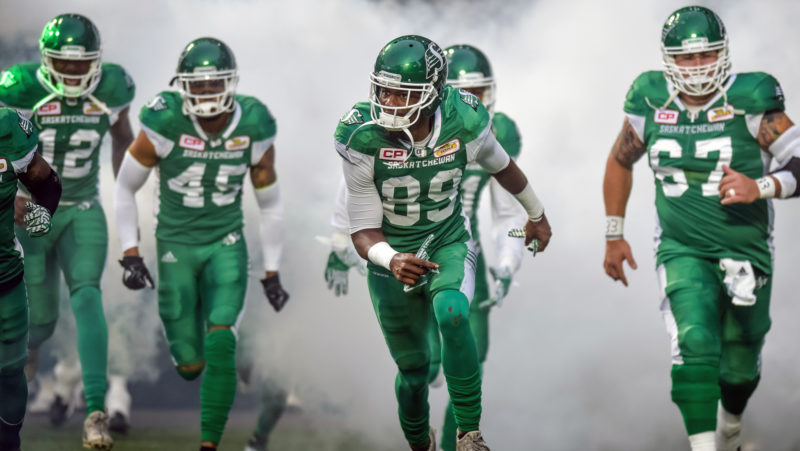 The Riders are hoping to have both Duron Carter and Willie Jefferson back in the program for 2018 (Matt Smith/CFL.ca)

5. Don’t expect all three of T.J. Heath, Chris Randle and Maurice Leggett to be back in Winnipeg.

Bombers general manager Kyle Walters says one of the challenges of becoming a better football team is keeping talented players on the roster each off-season. He’ll face some tough decisions with his free agents this year, with three of his top defensive backs ready to hit the open market.

Walters admitted on Wednesday that the likelihood of signing all three is not good.

“It’s impossible to pay everybody what they all want. It’s just a reality of our league unfortunately,” said Walters. “We’re having discussions, for sure. It’s going slow right now but we have until the middle of February, so we’ll see if we can or can’t make it work.”

The REDBLACKS made an aggressive move to sign Noel Thorpe as their new defensive coordinator, moving Mark Nelson to a new role as linebackers coach. Thorpe has a reputation for his aggressive, playmaking defences, something that Ottawa GM Marcel Desjardins had in mind when he made the move.

“We need an identity on defence,” said Desjardins. “Partially because of our personnel and our younger players, we’ve been a little bit passive defensively and we just feel we need something to change the dynamic of our defence and we feel Noel is that person.”

The REDBLACKS’ defence ranked sixth in the league in allowing 384.8 yards per game in 2017 while ranking dead last with only 22 takeaways. 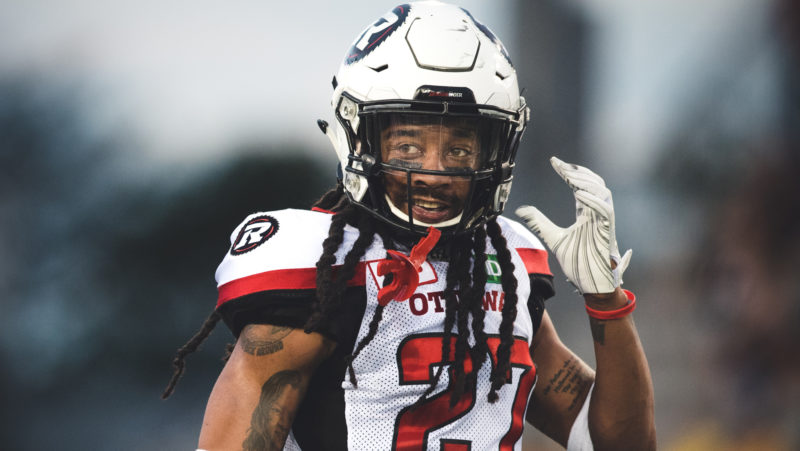 Taking the ball away will be a key focus for Sherrod Baltimore and the REDBLACKS in 2018 (Johany Jutras/CFL.ca)

7. Commissioner Ambrosie is putting the business of the CFL in a spotlight like never before.

The CFL’s commissioner says he’s prepared to propose a dramatically different business model to CFL general managers and presidents over the next couple of days — from ticketing to media access.

This, of course, is the point of the annual meetings (which are usually held right after Grey Cup, but this year have been moved back by Ambrosie) — to generate those important discussions.

Hufnagel also issued an update on injured offensive lineman Pierre Lavertu, who was sidelined during the 2016 season and hasn’t played since. Lavertu’s status appears to be up in the air for 2018:

“It’s really a sad story, no question about it,” said Hufnagel. “He’s supposed to have gotten a second opinion when he got home to Montreal, but I’m not quite sure that has been done yet.”

The Stampeders could have used both players in 2017 and are crossing their fingers for better news moving forward. 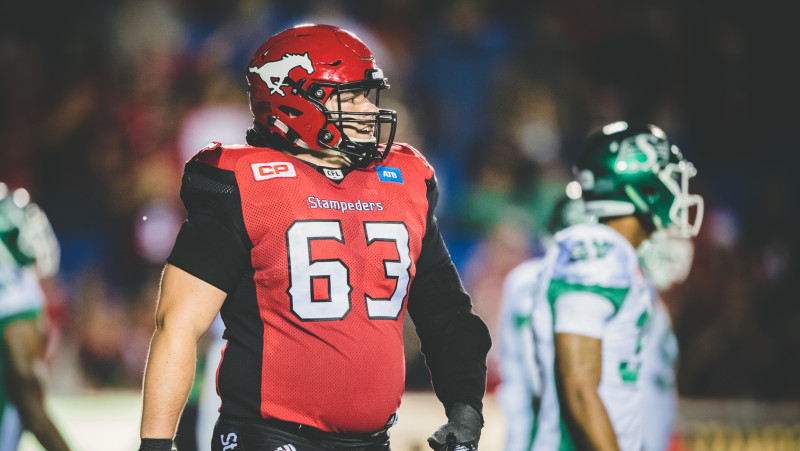 Stamps centre Pierre Lavertu has been sidelined since part way through the 2016 season (Johany Jutras/CFL.ca)

9. The Ticats are considering all options when it comes to Johnny Manziel — including a trade.

While Johnny Manziel’s self-imposed Jan. 31 deadline is three weeks away, Ticats VP of football ops Kent Austin says he isn’t concerned by that or the back-and-forth nature of the contract negotiations.

“I chalk it up to normal negotiations,” said Austin. “Everybody’s going to take a position on both sides and negotiate from those positions . . . I don’t read too much into it. Negotiations are fluid as they always are and they can change quite a bit on a given day.”

The goal, Austin added, is to make the football team better. That won’t happen by overpaying Manziel, but it is possible, if a fair deal can’t be agreed upon, that Manziel’s rights will be dealt.

“Any asset that we have, whether it’s a draft pick, a current player under contract, a neg list player — doesn’t matter — we will look at that asset in the context of what makes our team the best football team,” he said. “If a trade discussion manifests in a way that makes us a better football team without him because of that trade than we would be with him, then it will be considered.”

10. It’s a matter of when, not if Zach Collaros gets a new deal from the Riders.

New Riders quarterback Zach Collaros is believed to be one of the highest-paid quarterbacks in the CFL and is rumoured to have one year left on his deal. But the Riders have spoken openly about their desire to strike a new contract, which Chris Jones believes will happen soon.

“I don’t want to put any time line on it, but it’ll happen sooner rather than later,” Jones told Rob Vanstone.

It’s assumed that Collaros will be the Riders’ starting quarterback in 2018, although nothing’s been declared.