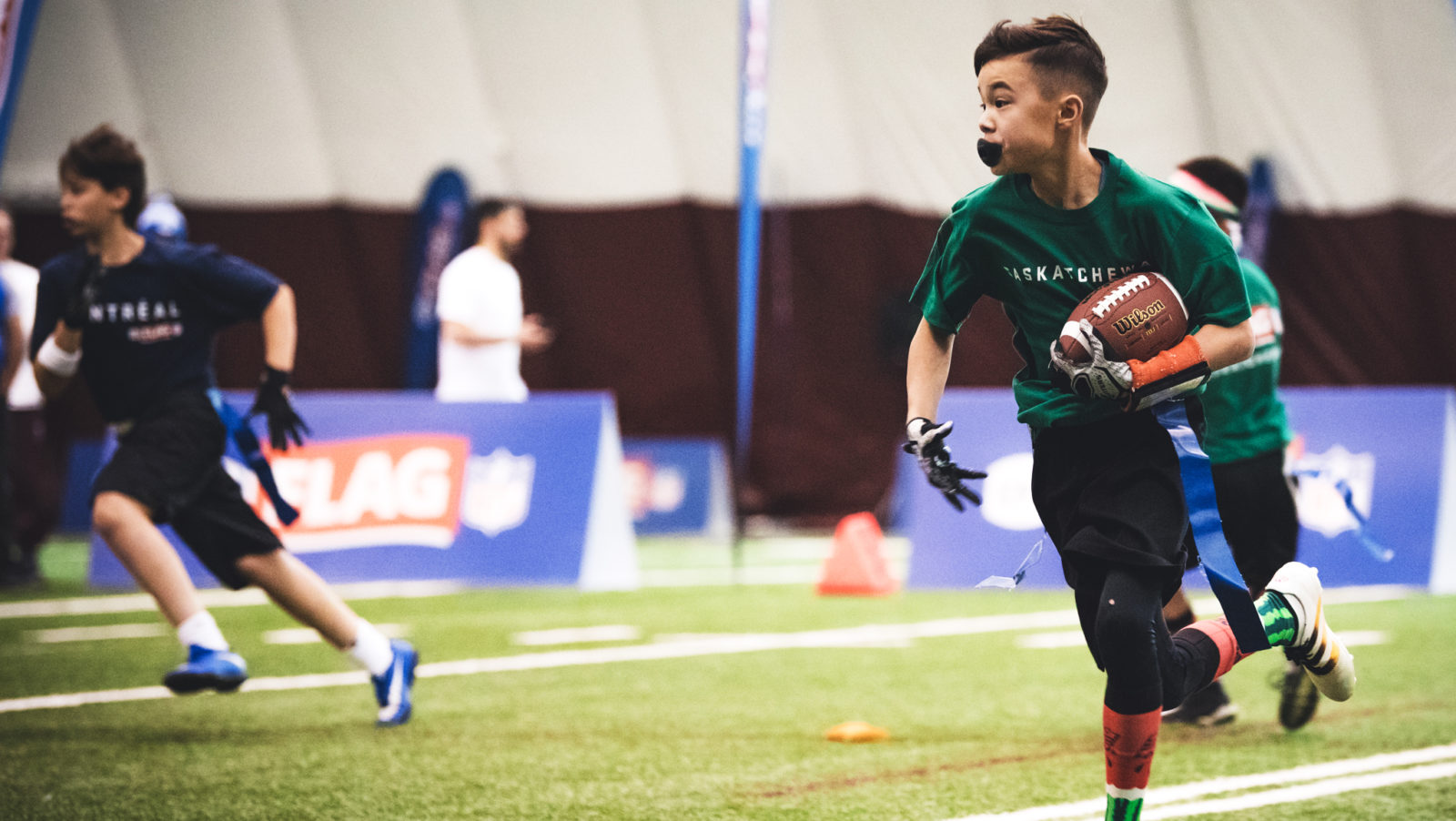 Kaidyn Keith never envisioned herself jogging on to the field, a 13-year old female eager to play in the National Football League Flag Championship tournament that is taking place during Pro Bowl week in Florida.

It would be something surreal, she thought, and reserved for VIP attention.

The same thought is shared by 12-year old Grayson Dakis who, six months ago, was focused more on his schoolwork, acoustic guitar and having fun with the family dog and cat at home.

Now these Saskatchewan youngsters, sharing virtuous happiness with a vitality of optimism, will be in the spotlight exposed to the high intensity of the biggest, and most challenging, endeavor of their lives.

There are eight more player stories that head coach Tyler Lloyd can highlight – all focusing on a dream come true that started with a determination to learn, rely on teamwork and excel at the fundamentals of the sport. 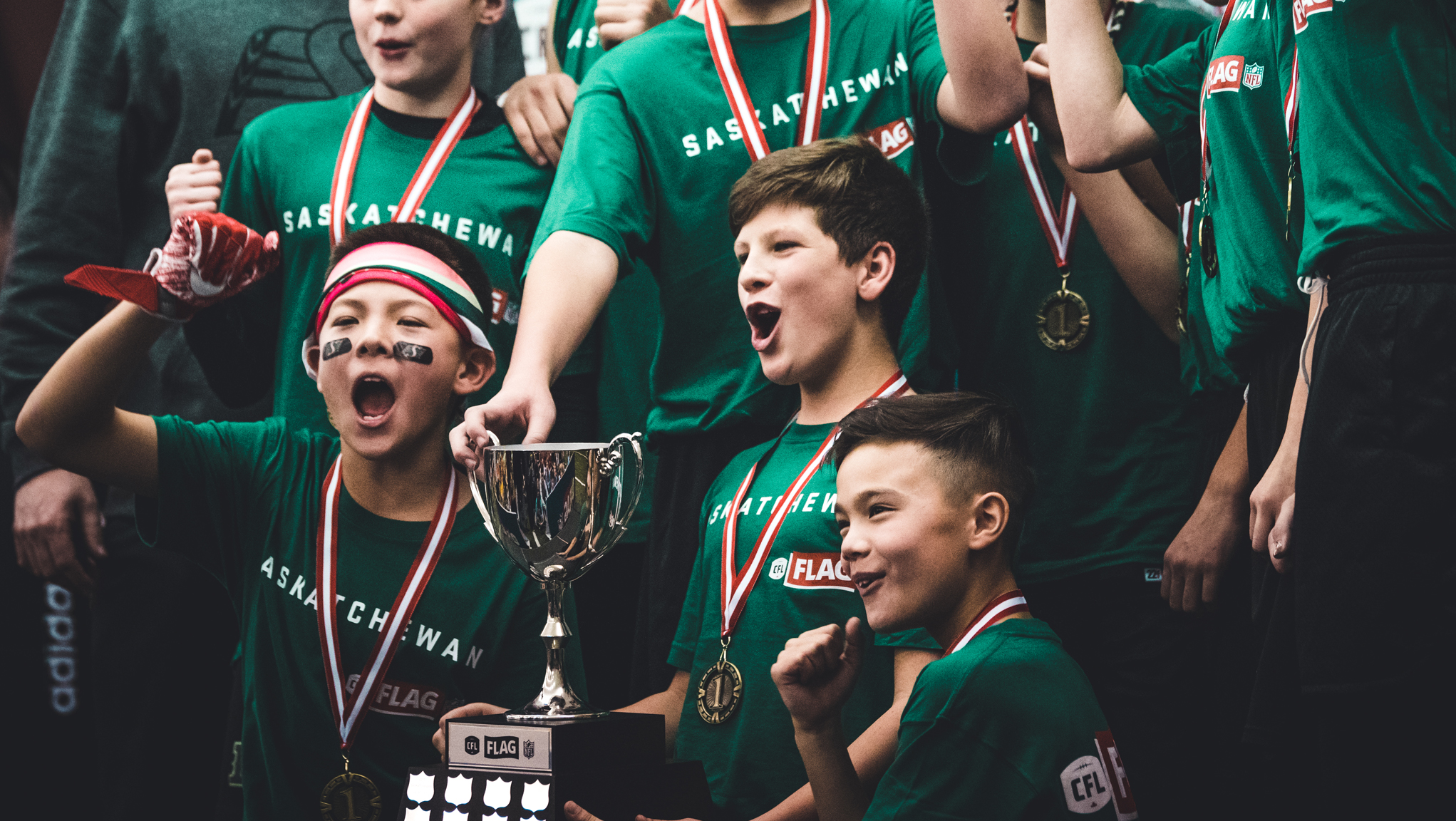 Members of the Saskatchewan Junior Riders pose with the trophy representing their win last November in the CFL NFL Flag Football Championship in Ottawa (Johany Jutras/CFL).

Lloyd, a veteran and reputable coach with amateur football in Saskatchewan, tinkered with the idea of entering a 10-player co-ed team that would compete in one of several CFL NFL Flag Football Regional tournaments to be held in Canadian Football League cities. The winners would advance to the finale in Ottawa during Grey Cup week.

To get there, Lloyd’s squad – then known as the North of Dewdney Avenue Riders – had to pull together an elite squad, from the Regina community, in a relatively short period of time. Then, hope to advance out of the playoff.

Nothing to it – and there was more celebration to come.

Perhaps there was no surprise for this group of very talented youngsters after putting together an incredible overall record of 11-0-1, outscoring opponents 266-47 – including a jaw-dropping 20-7 win over British Columbia during Grey Cup week for the right to earn a trip to Florida.

With his team now known as the Saskatchewan Junior Riders – and supported by the CFL team – Lloyd has his players thinking that, competing in Orlando on fields not far from the Magic Kingdom, anything is possible.

The major spectacle is all under the auspices of the CFL and NFL, who launched the ambitious initiative last September to highlight and promote football, sportsmanship, teamwork and life skills.

“This is above our wildest dreams,” said an elated Lloyd, fiercely devoted to his players and to the promotion of football. “Entering was the right thing to do and watching what these players have accomplished has really been something special. 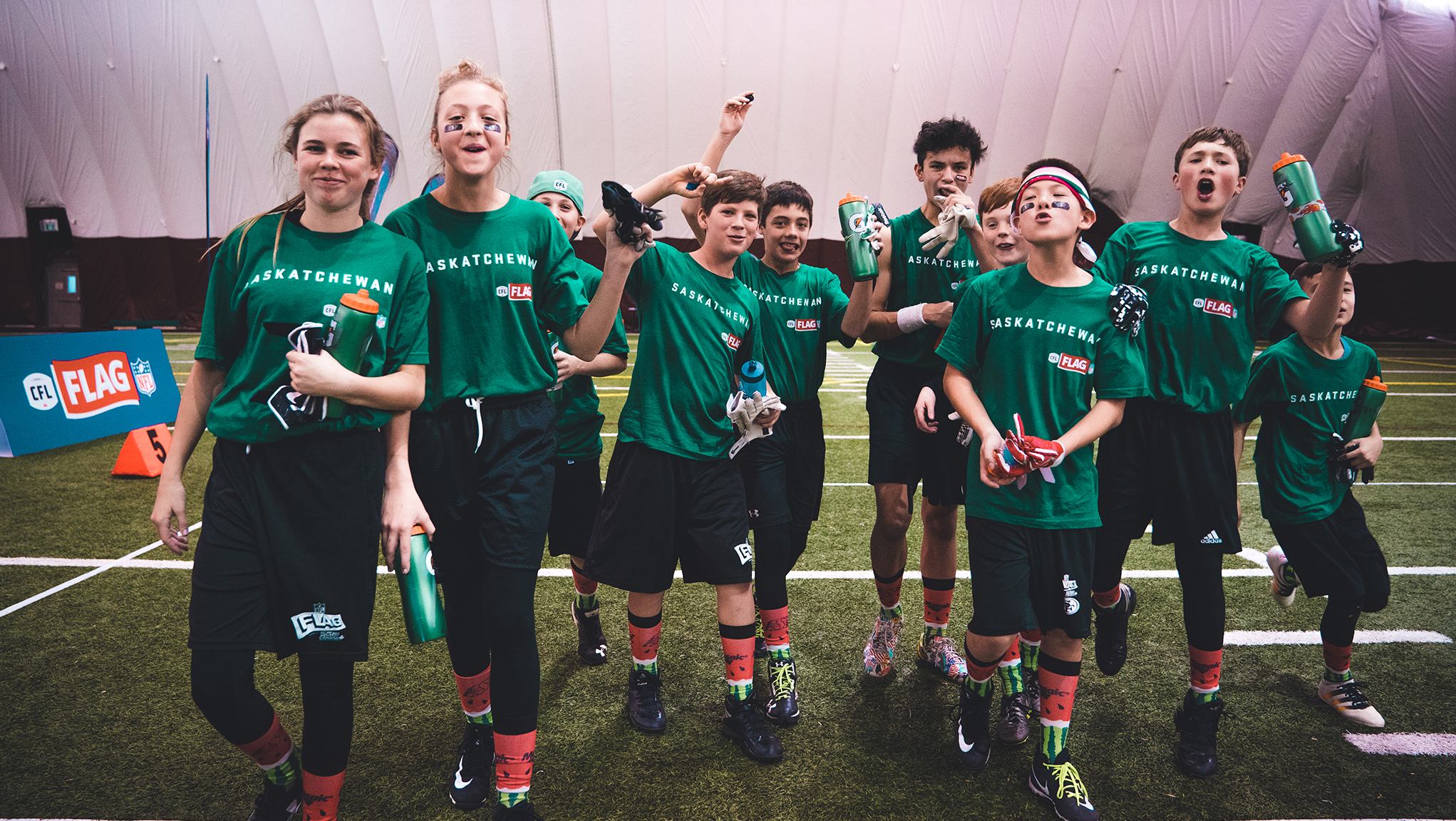 Members of the Saskatchewan Junior Riders celebrate last November after earning a ticket to the Pro Bowl to represent Canada (Johany Jutras/CFL).

“We put this group together two weeks before the CFL tournament. They are very coachable, none have high strung sports egos and along with being darn good players, they are superb, focused and caring individuals – my second family.”

Life’s joys and challenges took a huge step for the Canadian squad headed South, who may now be obsessed with the victory lap and hope to continue it’s comfortable undefeated streak.

“We’re humble, we’re going (to Orlando) to have fun and stay focused on doing our best,” said Dakis, one of the offensive stars. “When I get time to think about how far we have come, it’s actually pretty cool. We are so proud to be representing Canada, will be wearing red. On the field, we’ll be Rider Green.”

As for trying to keep opposing teams from scoring, that’s a huge task that falls on the superb defensive leadership of Keith, one of two girls on the team and an individual who plays the rusher position, which is similar to that of a defensive end.

“I love the game, my job is to get to the sacks and force the other team to give up the ball,” said the 5-foot-8 Keith, who has been a dominant figure in the Regina success story. “It’s an amazing feeling knowing that we’re representing Canada, there’s a great opportunity to learn more and, in this game, girls can do anything boys can do.”

The Junior Riders play in the same bracket as teams from China, Mexico and the United States with only the top team taking home the championship from the International Division.