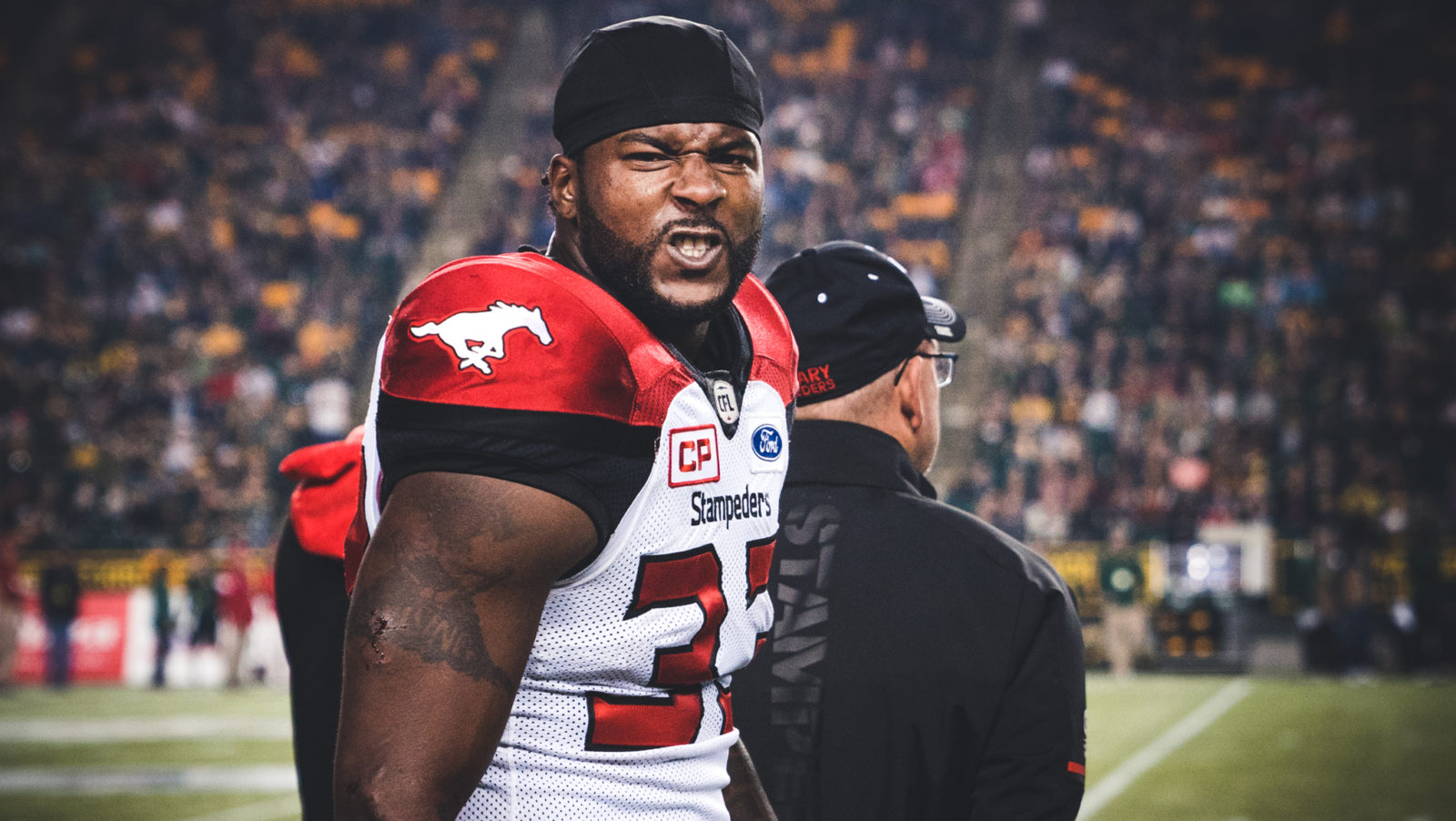 CFL free agency opens in just over two weeks and it is as stacked a class as we’ve ever seen. Trying to nominate the top available players at key positions is not an easy job; much like coming up with a CFL.ca top 30 list was a difficult task earlier this week.

We gave it a go anyway though, starting this week on the offensive side of the ball.

I understand the reasoning, but I shall respectfully disagree with the panel that compiled our top 30 list. Messam came in at number 25, which is significantly lower than where he comes in for me. I believe Messam is one of the top two or three available free agents and the best at his position.

Messam is coming off his third straight 1,000-yard season and came 20 yards away from winning his second straight rushing title. Since arriving in Calgary, Messam has been the CFL’s most consistently elite tailback and I don’t think he’s poised to fall of a cliff. 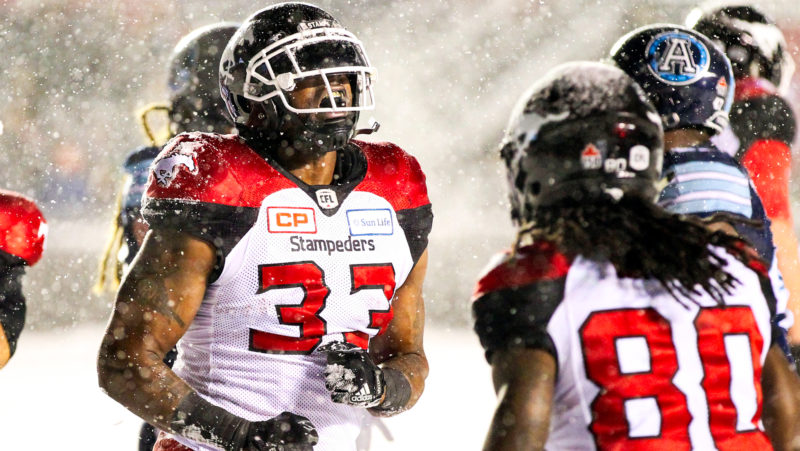 I get that we’re talking about a 33-year-old coming off a down statistical year. I’m not making the argument Messam is going to dominate in 2018. Instead, I’m asserting he’s the best free agent rushing option, for a few different reasons.

Not only has Messam gone over the millennium mark in his last three seasons, he’s also been a touchdown machine. Messam has 21 majors to his name over the last two seasons, a total that dwarfs his next closest competitors at the position. There are very few running backs more automatic than Messam in the red zone, and that’s tough to ignore.

Let’s also not forget Messam holds a Canadian passport, which makes him even more valuable considering the ratio advantages he presents. Calgary has been perhaps the league’s best team recently at having impact national players in spots traditionally occupied by international bodies. Messam immediately followed Jon Cornish with the Stamps and they’ve loved their ratio options as a result.

Messam’s biggest competition as top available tailback is John White, who we wrote about last week. I think White has the potential to have a really nice season, and I think he has great buy-low value right now. What White doesn’t have, though, is Messam’s longevity and consistency, and that’s why the latter still leads the free agent rushing crop for me.

Narrowing down a top free agent receiver was the most difficult task on the offensive side of things, because we’re talking about a true bumper crop in 2018. While I differed from our top 30 panel on Messam, I’m on board with them here. Spencer took the No. 1 crown on that list, and I have him as my top receiver.

It was tough, though, because S.J. Green is coming off an incredible season while I still think DaVaris Daniels is as explosive as they come. When you throw in Grey Cup hero DeVier Posey and two-time 1,000-yard man Luke Tasker, this conversation becomes even more muddled.

In the end, though, I had to go with Spencer, because I think we are just starting to scratch the surface of what this guy can do. With blazing speed and soft hands, Spencer has the tools that quarterbacks dream of in receivers. He’s a deep threat each and every down and creates separation with ease. 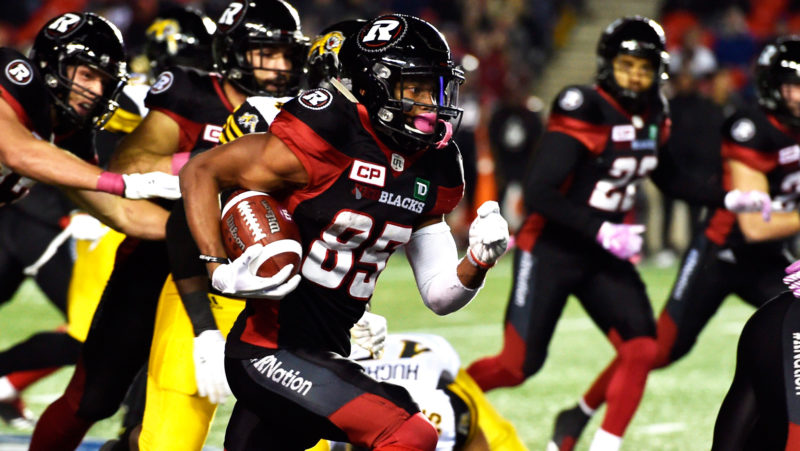 Spencer also adds a second very important element, and one that puts him over the top for me: his work in the return game. After seeing off-and-on duties in two years with Toronto, Spencer burst onto the scene as one of the CFL’s most explosive returners in his first season with Ottawa.

The numbers don’t lie in this case. Spencer went over 1,500 total return yards, including 929 on 70 punt returns. His afterburner speed makes him a long threat whenever the ball is kicked to him and Spencer seemed to get more and more comfortable in a regular return role as 2017 went on.

For me, the 2018 class of free agents is all about the receivers, because there are so many high-impact names potentially available. I have Spencer ahead of established impact makers like Green and Tasker, and I have no hesitation with that choice. The soon-to-be 26-year-old looks poised to truly explode this season.

There were two high-profile offensive lineman on the market heading into the start of last week. Well, now that Alex Mateas has been extended in Ottawa, Bond is the best man standing at his position, and I think there will be a ton of interest if indeed he hits the free agent frenzy.

I think we’re talking about a player just coming into his own here. Bond is a 2013 seventh round pick of the Minnesota Vikings, but enters this season at the age of 27, so we’re talking about a relatively young player. I’m not saying Bond is a late bloomer, but it does seem to have taken him a little longer to get comfortable as a professional; Winnipeg is the first team he’s spent more than a season with in his pro career.

Now that he’s found that comfort level, what Bond could do for a team is really intriguing. At 6-foot-7 and 356 pounds, we’re talking about an absolute beast of a man. He’s hard to move and opened up a lot of space in Winnipeg’s run game by his size alone. The fact he’s steady and reliable only made him more important to the Bombers last season, as he was an everyday starter prior to getting injured late in the season. 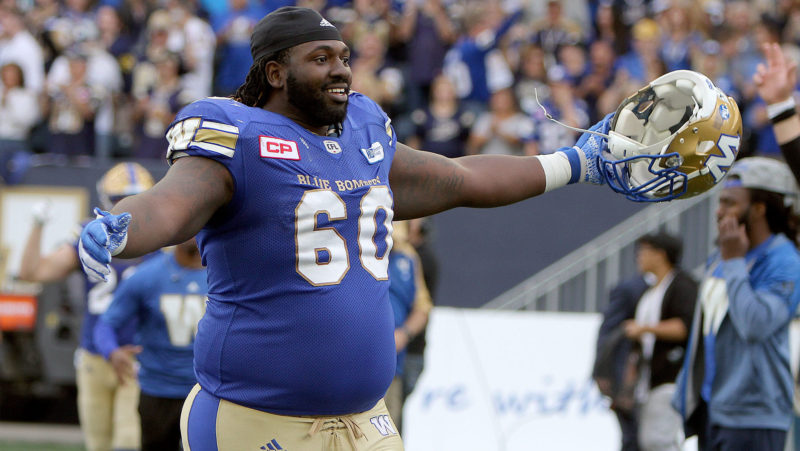 For teams looking for help in the interior of their offensive line, Bond is almost certain to be available. Winnipeg is ready to move on after two years, mainly because Canadian Pat Neufeld stepped in effectively while Bond was injured late in the year. To add a national player to the offensive line is of ratio benefit for the Bombers; Bond is an international guard.

And that brings up the only thing truly holding him back from a big payday come Feb. 13. Bond is American and thus won’t be sought after quite as much had he held a Canadian passport. Yes, guys like Stanley Bryant and Derek Dennis have hit it big in recent years as international linemen, but they both were free agent left tackles, which puts them in a different conversation.

That doesn’t mean Bond won’t have suitors, though. Not being Canadian may keep his price tag a little lower, but Bond is clearly the best offensive lineman available this year. For a team looking for a reliable presence with some untapped potential to boot, Bond is the ticket.