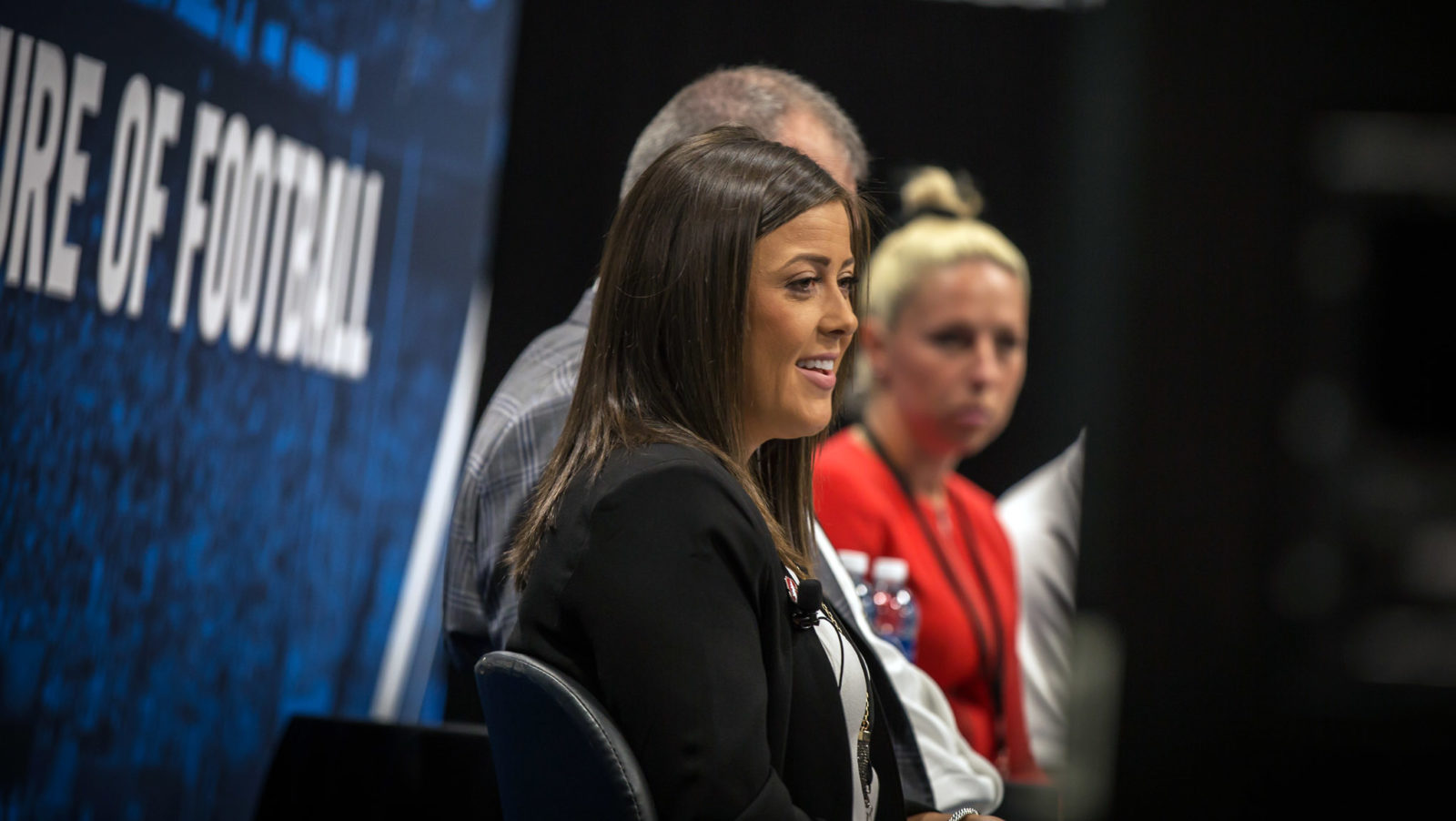 Jim Popp stood at a TV with game film playing, starting, stopping and rewinding it as he broke down what he saw.

The Toronto Argonauts GM had a small but captive audience on Saturday morning. Seated at a table were Tanya Henderson, Laurence Pontbriand and Annabelle Chevrier, three of the four Canadian participants at the NFL’s Women’s Careers in Football Forum. Argos director of football administration, Catherine Raiche, was seated next to Popp, offering up insights as well.

Popp was leading a breakout session about scouting players. As the clips rolled, he went into the minute details of what he looks for in a kicker, about what makes a defensive back good and great, and how the various strengths and weaknesses of linemen can find symmetry when they offset one another. The session was slotted to go from 9:45 a.m. until 11, with a 15-minute break to follow. When they got their five-minute warning that the session would be ending, the women quickly tossed the break aside to keep listening to Popp.

MORE FROM O’LEARY: Sam Rapoport on a mission to break barriers 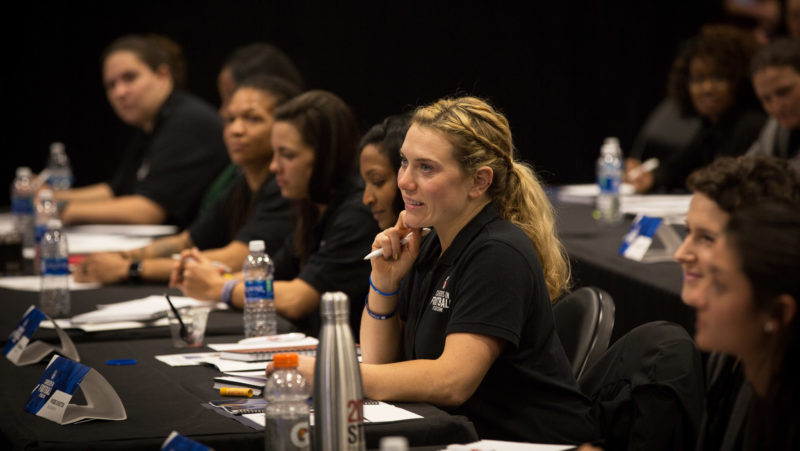 “I loved it,” said Pontbriand, a phys. ed teacher from Montreal that plays football for Team Canada. “I really like all of the little details he talked about, especially from the kicker’s point of view, down to the milliseconds they were timing him. It’s definitely something I’m interested in. I loved it.”

“What I loved the most was the panel that we got today,” added Chevrier, also from Montreal. For the aspiring scout and coach, it was a taste of what she’d like her future to look like.

Henderson, a linebacker on Team Canada and a personal trainer in Edmonton, is also interested in coaching and scouting. She loved the scouting session with Popp. Her only complaint was a lack of Eskimos content in the film they were watching.

Simcoe, Ont.’s Kennedy Harvey rounded out the Canadian content in the 50-woman forum. Harvey was the first female football coach at both Simcoe Composite High School and with the Carleton Ravens junior football program. She’s now a student at Texas Christian University and works in the school’s athletics department.

The forum was two days of presentations from coaches and executives in the NFL, NCAA and CFL, with Popp, Raiche and commissioner Randy Ambrosie all involved throughout.

The CFL has been involved in the women’s careers forum since its inception last year. This year, the league is taking steps forward. It hired Sarah Taplin, who started on Jan. 9, as an intern in football operations. The league is hoping to provide more women opportunities in football ops in the coming years.

Taplin competed in track and field at Dalhousie, after winning nationals as a high schooler in 2009 in the triple jump. Her father, Joe Taplin, is the inside linebackers coach at Saint Mary’s University and has been coaching since 1999. Sarah grew up around the game, making the players with cool names her favourites as a kid. Studying kinesiology at Dalhousie, she ended up working with SMU as an athletic therapist, on the field with her dad. She’s still trying to figure out exactly what she wants to do in football, but she knows that she loves the game.

Just a few weeks in, she’s still getting a feel for her job.

“Right now it’s a lot of paperwork, just filing things, but I love the contracts,” she said. “I love learning about contracts and getting to file them and learn. I never knew that, say someone goes on the practice roster, they have to sign a new contract. Say they want to come back and play on the team the next week, they have to sign more new contracts.” 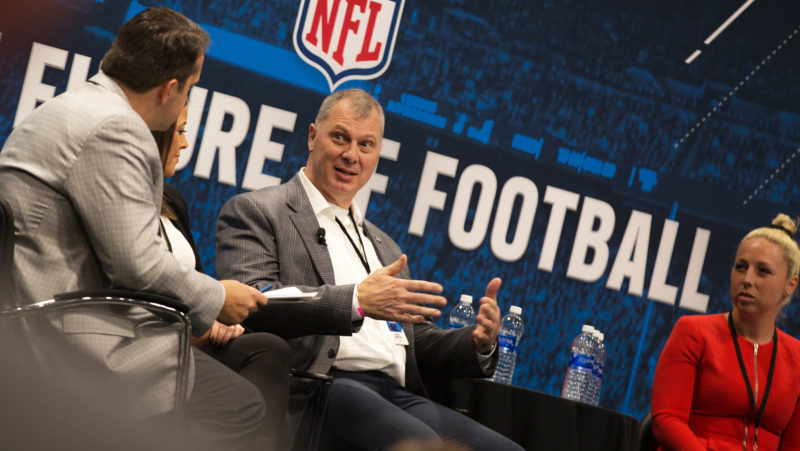 Sam Rapoport, the NFL’s director of football development, has been thrilled to see more women taking NFL sidelines and earning spots in front offices. She’d love to see the CFL continue to make moves in the same direction.

“To have the best staff in place you have to consider 100 per cent of the pool and not 50,” she said. “I think that no matter what population you’re talking about, if you don’t believe that, there’s probably something wrong with your logic. If you don’t consider everyone, you certainly can’t get the best in place.”

Rapoport opened the forum in Orlando, held during the NFL’s Pro Bowl week and mentioned how nine of last year’s participants in the forum landed NFL jobs.

“We can do better than that,” she told the crowd of women in front of her.

That kicked off a powerful and inspiring two days.

Henderson said “sitting and listening to people talk about what they do” was the most valuable thing she got from the forum.

“Seeing when people talk about something they’re really passionate about (you can see) their faces react. If you’re reading something you never see that,” she said “You can really see the genuine enjoyment that people have doing something that they love, versus them working a job where it’s just a job. The genuine want (of the presenters) to be here and the want to help us too, it’s really great.”

Like for any football-minded person, the Xs and Os were satisfying, but the networking opportunities were continually stressed to the women in the forum. 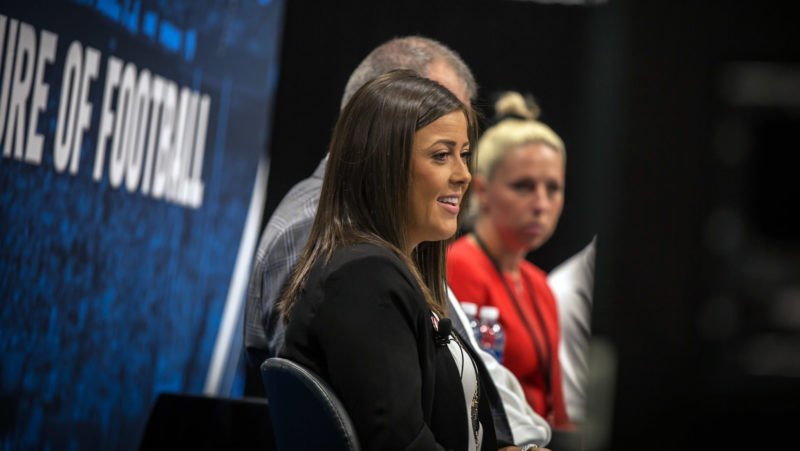 “I didn’t know what to expect. I think overall the experience was amazing,” Chevrier said. “They gave us so many tips on what we should be aiming for and what makes a good impression. I think that’s really going to help us, all the women here to get to what we actually want and to aim in the right directions.”

After years of hearing no, or being told their dreams were unrealistic — Henderson has been vocal about squashing stereotypes as she’s established herself as a player — these emerging football minds see change starting to take effect.

“It’s definitely changed a lot,” Henderson said. “From a career standpoint, which I hadn’t really thought about the last couple of years to even when I started playing, I’d hear all of the things: Women don’t know anything about football, women don’t play football. Yeah, we do.

“Even within my playing career I’ve seen support with people knowing more about (women’s football) and I think even when it comes to women transitioning into career goals, one of the biggest things they say is women don’t play football, but they do.You don’t have to play football to know football, but I think that really helps kind of turn the opinion a little bit.”

“I want a female commissioner one day. Will that happen? I don’t know, but it’d be cool,” Taplin said. “I think it’s great. It’s such a male-dominated sport and…it’s amazing that men are starting to respect women enough in a sport that some have not necessarily played and still understand the capacity of someone that might not have played.”