EDMONTON — The Edmonton Eskimos have released Adarius Bowman after seven seasons with the club, the team announced Monday.

The move comes as the veteran receiver was reportedly due a roster bonus.

The team also announced Monday it has signed Vidal Hazelton to a contract extension through 2018.

Bowman has more than 9,000 career receiving yards and 48 touchdowns in 10 seasons with Saskatchewan, Winnipeg and Edmonton. However, last year he was held to 534 yards and five touchdowns in 12 games as he took a backseat role to Brandon Zylstra and Derel Walker in the Esks’ passing offence.

MORE ON BOWMAN
» Bio: Adarius Bowman by the numbers
» Esks’ Willis traded to Ottawa, then BC
» O’Leary: The winds of change for Willis, Hughes
» CFL.ca Free Agent Tracker

At 32, Bowman suddenly becomes one of the most intriguing names available on the open market, and the explosive 6-foot-3 pass-catcher gets a jump on many of the other stars who will become free agents on Feb. 13 when free agency officially opens.

Bowman, who had five catches for 97 yards and two touchdowns in playoff games against Winnipeg and Calgary last post-season, is free to sign with any team right away.

An Oklahoma State alum, Bowman’s rise to stardom became synonymous with the Eskimos’ success over the years. Bowman first laid down his roots in Edmonton when he joined the team in 2011. That year, after a tumultuous first three seasons in the league in Regina and Winnipeg, Bowman had a breakout season, recording 1,153 yards and four touchdowns along with a career-high 18.6 yards per catch.

The following year would bring the most difficult obstacle of Bowman’s career. Bowman suffered a catastrophic season-ending knee injury in the second game of the season, sidelining him for the rest of 2012 and part of the 2013 season.

By 2014, however, Bowman re-asserted himself as one of the league’s most dynamic forces catching the football. The Chattanooga, Tenn. native shattered previous career-highs with 112 catches for 1,456 yards and six touchdowns, helping the Eskimos reach the Western Final in their first season under Chris Jones.

After helping the Eskimos win the Grey Cup in 2015, Bowman had one of the most impressive statistical seasons in CFL history in 2016, leading the field with 120 catches, 1,761 receiving yards and nine touchdown receptions. 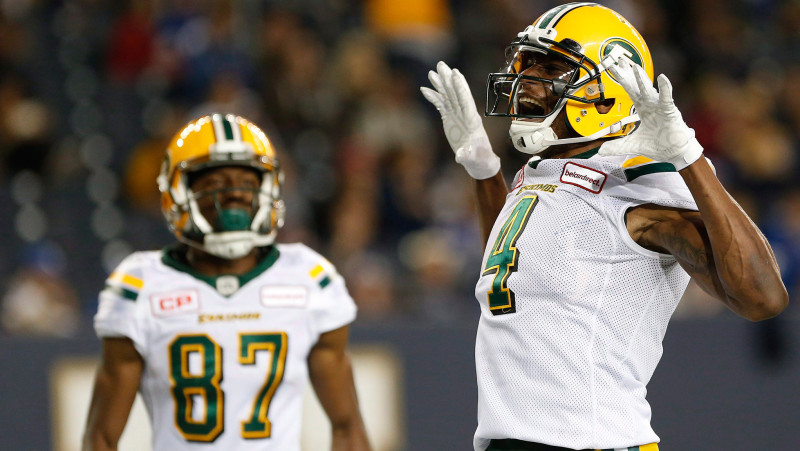 After joining the Esks in 2011, Adarius Bowman became synonymous with the team’s success (The Canadian Press)

Bowman’s release, while unexpected for many, has likely been a looming possibility for Brock Sunderland and the rest of the Eskimos’ front office. While that group has also lost 2017 league-leading receiver Brandon Zylstra to the NFL’s Minnesota Vikings, star receiver Derel Walker is back under contract after agreeing to an extension.

Bryant Mitchell is under contract and could be in line for a significant role on offence in 2018, while the aforementioned Hazelton could also enjoy more targets his way.

Either way, ‘who will catch passes from Mike Reilly’ has become one of the leading off-season questions following Monday’s development. Reilly was the CFL’s Most Outstanding Player last season after throwing for 5,830 passing yards and 42 combined touchdowns over a career-high 18 starts.

The Eskimos have one of the league’s most well-rounded running backs in the veteran C.J. Gable, but it’s no secret that this team is built around Mike Reilly and the passing game. And in the year the Eskimos host the 106th Grey Cup, they now have two pretty big voids to fill in that regard.

As far as what’s next for Bowman, there should be plenty of interest in a receiver with 10 years of CFL experience and more than 9,000 receiving yards who’s great in the community (Bowman was named the 2017 Tom Pate Memorial Award winner for his contributions to his team and the community).