Still Shopping: Who still needs what in free agency? 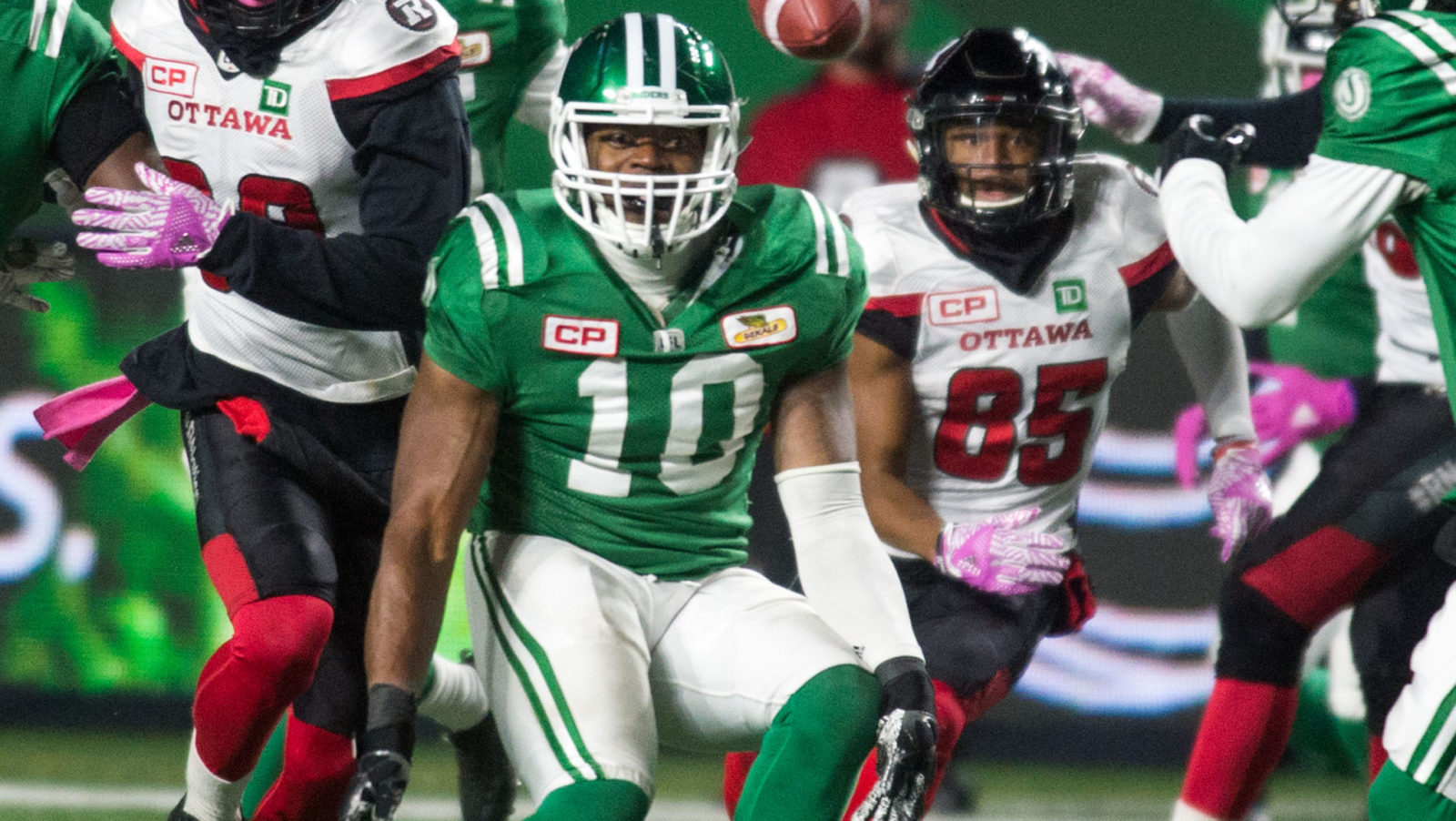 Still Shopping: Who still needs what in free agency?

TORONTO — The first wave of free agency has come and gone, but the week is not over yet.

General managers across the league spent their Valentine’s Day doing some shopping, taking big names like T.J. Heath, Travis Bond and Jamaal Westerman off the market.

However, there are still holes to be filled before we move on to the combine and the draft.

Who still needs what? Let’s take a team by team look.

Ed Hervey has addressed the offensive and defensive lines this off-season, making the Lions a much stronger team in the trenches than the one that generated little pressure on defence (95 pressures, 28 sacks) and allowed the most sacks in the CFL (141 pressures, 49 sacks) in 2017.

The attention quickly turns to the defensive backfield, where the Leos have lost two high-ranked free agents in Loucheiz Purifoy and Chandler Fenner and could lose another in Ronnie Yell.

T.J. Lee is back at halfback while Otha Foster, added in Day 2 of free agency, may fit in as the Lions’ SAM linebacker. Canadian and former second round pick Anthony Thompson should start at safety, but that leaves at least three starting jobs open: two at corner and one at halfback.

A.J. Jefferson and Garry Peters add depth and competition in camp, but Mark Washington’s secondary could use some more experience at the position before training camp.

With Lee at boundary half, Aaron Grymes would be a dream fit for his former general manager in Ed Hervey. Jerrell Gavins is also a fit at half and would bring versatility to the Lions’ defence.

At corner, bringing back Ronnie Yell or signing Akwasi Owusu-Ansah should be on the table for Hervey and co.

It’s been a busy couple of days for Brock Sunderland, who’s answered some questions on the defensive side of the ball by bringing back 2017 starters Johnny Adams, Forrest Hightower and Adam Konar. He’s also added Alex Bazzie to the defensive line, completing the makeover of a unit that was mostly on the wrong side of 30.

Bringing back Aaron Grymes remains a priority, but another area of need for the Green and Gold is at left tackle, where there’s a hole left by Joel Figueroa‘s departure to BC. The 28-year-old international was a rock for the Esks in 2017, while his peers recognize him as one of the best offensive linemen in the CFL.

The offensive line has been a strength for the Eskimos, last year powering the CFL’s second-best rushing attack and also giving up the fewest sacks in the league (29), keeping Most Outstanding Player Mike Reilly healthy and on his feet for all 18 games.

David Beard, Justin Sorensen, Matt O’Donnell and Colin Kelly are likely starters in 2018, but who can step in on the left side in Figueroa’s spot?

It’s not that John Hufnagel should just go on vacation for the next couple of months, but the deepest team in the CFL has no glaring needs after the start of free agency.

The O-line is set regardless of the status of Pierre Lavertu. The return of DaVaris Daniels gives Calgary four highly-talented international receivers. The secondary has added Emanuel Davis and could also lean more on 23-year-old Patrick Levels. On the D-line the Stamps have three quality pass-rushers on the outside, while Micah Johnson, Derek Wiggan and Ese Mrabure make a formidable trio on the inside.

If there’s one question for the Stamps, it might be at running back. Jerome Messam is out after signing with the Riders. Terry Williams is in line to take over the Calgary backfield but has one career start to his name. Roy Finch could get more involved on the offence but may not be suited for a lead role.

The Stamps could also use another depth piece or two in the secondary.

Let’s go with running back as the Stamps’ biggest need, although we’re probably talking about a low-key add — Williams looks like a solid prospect that could be ready for the limelight in 2018.

As much as Duron Carter would like to play on both sides of the ball, Chris Jones would probably prefer to avoid a situation where he’s relying on his top offensive star as a defensive back too often.

The Riders’ secondary has taken strides the last two years, but losing Kacy Rodgers on the boundary leaves a gaping hole that Carter simply can’t fill on a full-time basis.

Jovon Johnson will start at field corner and Crezdon Butler and Ed Gainey lock down the halfback position, giving Saskatchewan a solid secondary going into free agency. Jones has already made a splash in free agency this year, but there should be another move coming in the defensive backfield.

Perhaps the Riders are eyeing Chris Lyles and Taylor Mays as their boundary corner (both players are 6-foot-4 and should have the physical strength required to play the position), but a veteran like Akwasi Owusu-Ansah or Ronnie Yell would provide a significant boost for Jones’ defence. 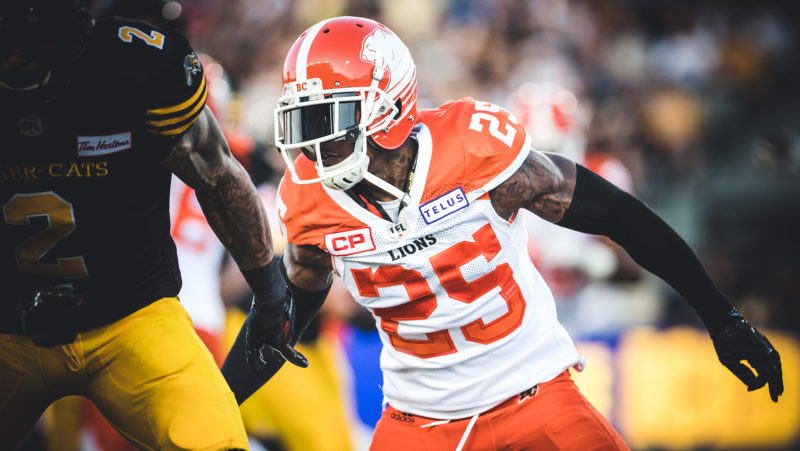 The Bombers have a wealth of talent on the defensive side of the ball as General Manager Kyle Walters has wasted no time making adjustments this off-season.

While Chandler Fenner and Anthony Gaitor will improve Winnipeg’s secondary, the Bombers could use some help at the linebacker position, particularly in the middle where 2017 starter Sam Hurl has joined the Saskatchewan Roughriders.

Hurl had 65 tackles, a sack and an interception for the Bombers last season, but if Walters can alter the radio and go with an American at that position, there are several potential starters that could provide an upgrade.

Or, if he wants to keep it Canadian, perhaps former Bombers first overall pick Henoc Muamba is an option.

Either way, the middle linebacker spot is by far the biggest Walters has to fill before the start of training camp, and addressing that need could make the Bombers’ defence one of the best in the CFL — at least on paper.

The Ticats have ‘taken care of their own’, so to speak, bringing back all of their big-name free agents before Tuesday’s deadline. That means June Jones’ team will have plenty of continuity going into 2018, something that bodes well following a 6-4 run to end the season.

Let’s go through the list. On offence, all five starting offensive linemen are back on the roster. At receiver, Luke Tasker‘s return complements a deep group that also includes Jalen Saunders, Brandon Banks and Terrence Toliver. Running back Alex Green and quarterback Jeremiah Masoli lead the Ticats’ backfield.

On the other side of the ball, Davon Coleman, Justin Vaughn and Ted Laurent make up a strong presence on the interior D-line. Adrian Tracy and Justin Capicciotti are the starting defensive ends. Larry Dean and Simoni Lawrence are back at linebacker. While in the secondary, Abdul Kanneh could play SAM next season with Richard Leonard, Courtney Stephen, Demond Washington and Don Unamba also fitting into the backfield.

The Ticats could use a depth piece or two in the secondary, but the biggest question might be at fullback. C.O. Prime has not signed an extension, while there are other names on the market including Christophe Normand and Alexandre Dupuis.

All of this is to say it’s been a pretty good off-season for Kent Austin and Eric Tillman in the Hammer. 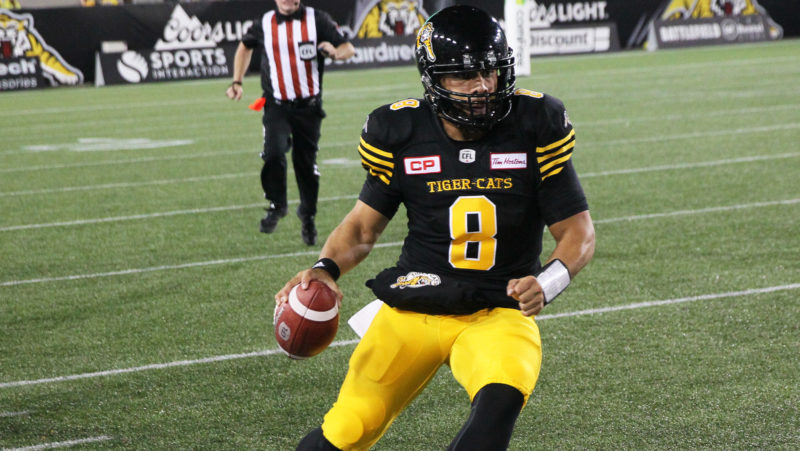 With the majority of their starters back, the Ticats will have continuity going into 2018 (David Chidley/CFL.ca)

While the running back market is thin right now, that should be one of the top priorities for Jim Popp over the next couple of weeks or so. That’s assuming that James Widler Jr. doesn’t play in 2018.

The Argos’ season took off when Wilder broke out in September vs. the Eskimos, with the ground game providing much-needed balance over the last few months of the season. If Wilder departs, his production will be hard to replace.

Martese Jackson is an intriguing prospect but not an every down back. Brandon Whitaker is a free agent and could be brought back. And Popp will likely bring in some internationals to compete in training camp. It’s not the most pressing need because, as some will say, young American running backs are a dime a dozen — the Argos will find someone to run the football.

Elsewhere, the secondary has been shored up with the addition of T.J. Heath. The Argos also have Qudarius Ford, Cassius Vaughn, Jermaine Gabriel, Matt Black, Johnny Sears and Alden Darby in their defensive backfield.

At linebacker, if Bear Woods leaves, they might be content to go with Marcus Ball at WILL, Terrence Plummer in the middle and either Ford or Vaughn at SAM.

That leaves running back as the biggest need in Toronto.

The REDBLACKS have added two key pieces on defence with Loucheiz Purifoy, who will likely play SAM, and defensive end A.C. Leonard. But there’s still work to do with Noel Thorpe coming in as the team’s defensive coordinator.

Defensive tackle is one area of need following the departure of Zack Evans, but General Manager Marcel Desjardins should be looking for a middle linebacker while Taylor Reed remains a free agent.

With the offence completely shored up, all of Ottawa’s needs come on defence. Thorpe could find most of his guys in camp through healthy competition, but adding another veteran or two would go a long way for a unit that will be learning a brand new system over the coming months.

While Reed is still out there, so is Bear Woods as well as a Canadian option in former first overall pick Henoc Muamba.

The Alouettes have been among the busiest CFL teams in free agency, adding proven talent in Tommie Campbell, Mitchell White and a ratio-breaker in Jamaal Westerman to the defence. Why stop there?

The middle linebacker spot was a revolving door last season, with Dominique Tovell and Kyries Hebert both getting time there (Hebert can also fit in at WILL linebacker).

Signing a veteran for the middle would solidify the Alouettes’ linebacking corps, as it would allow Chip Cox to play SAM and Hebert to stay at WILL. Even better if it’s Henoc Muamba, who would give them four potential Canadian starters on the defensive side of the ball and the opportunity to play an extra American at receiver.

While the Alouettes’ biggest need might be quarterback, that won’t be addressed through free agency. The Als could also use another American tackle with Brian Simmons going to free agency and some names like Bruce Campbell and Derek Dennis currently on the market.

On the other hand, if the Alouettes and Defensive Coordinator Khalil Carter can build a dominant defence, the Als will be competitive in 2018.