TORONTO — The Canadian Football League and the Toronto Argonauts are saddened to learn of the passing of legendary head coach and general manager Leo Cahill.

The Toronto Argonauts issued a statement on behalf of the entire organization that read as follows:

“Leo Cahill was not only one of the most colourful coaches our game has seen, but he was also a tireless supporter of Canadian Football. Leo had a knack for identifying players, a talent for getting the best out of them on the field and a passion for promoting the game he loved. The Argos and Toronto fans will remain forever grateful for Leo’s lasting contributions to our organization and Canadian football as a whole. On behalf of the entire organization, past and present players and staff, and our fans, we extend our deepest sympathies and condolences to Leo’s friends and family.”

“In the long and colourful history of the Canadian Football League, few have left as lasting an impression, or added as much colour, as Leo Cahill. He was truly one of a kind. As a coach and general manager, Leo the Lip, as he was sometimes called by the media, had a flair for promoting the game that helped the CFL, and especially the Toronto Argonauts, rise to new heights. His shoot from the hip style helped to keep fans coming back for more. His showmanship, however, may have led some to overlook his deep knowledge of the game. He had a keen eye for football talent and an ability to knit diverse and sometimes equally flamboyant personalities into a winning team. Starting in the CFL as an assistant coach in Montreal, he was the Argos’ head coach from 1967 to 1972, and again from 1977 to 1978. He led a star-studded Argo team full of unforgettable characters to a Grey Cup berth in 1971, and was the team’s General Manager when it appeared in the Grey Cup in 1987. It’s fitting that those two Grey Cups are among the most memorable ever played. Mr. Cahill’s association with the CFL spanned many more years, as he worked as a colour commentator with the Canadian Football Network and the Canadian Broadcasting Corporation, a scout, and as a goodwill ambassador with the Argos. Our thoughts and prayers are with his family, his former players and his many friends and fans.”

Cahill was born in Utica, Illinois and from his earliest days as a youth, was captivated by football.  After a superb high school career, Leo attended the University of Illinois on a football scholarship, appearing in the 1947 Rose Bowl game.

His professional coaching career began in the early 1960s in Montreal, where Cahill was an assistant coach with the Montreal Alouettes football team.  His move to Toronto shortly thereafter, saw him take over direction of the Toronto Rifles of the Continental Football League.  He made the move to the Argonauts just before the 1967 season and immediately made them a force to be reckoned with.

Cahill coached the Argonauts three separate times, and had two Grey Cup appearances, once in 1971 as the coach of the Argos and a second time in 1987 as the General Manager of the Double Blue. 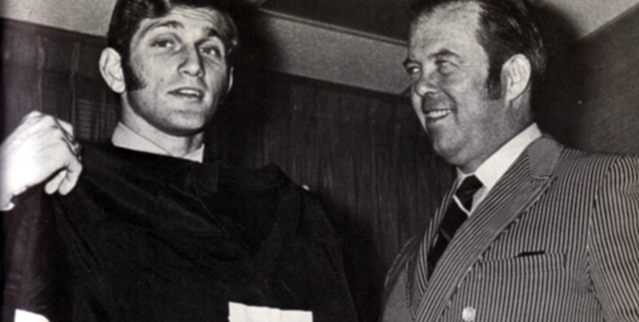 Cahill, seen here in 1971, poses with Joe Theismann after stunning the football world by recruiting the quarterback to come play with the Toronto Argonauts.

Cahill is one of the biggest names in Argonaut and Toronto sports history.  He will always be remembered as one of the finest, most colourful coaches in the game and perhaps the best recruiter of talent ever in the CFL.  In his time with the Argonauts he his credited with bringing in Argos greats such as Mel Profit, Jim Stillwagon, Jim Corrigall, Leon McQuay and Joe Theismann.  In 1999 he helped recruit defensive back Orlondo Steinauer to Canada who became one of the most productive safeties in the game before becoming a defensive coordinator in Toronto and Hamilton.