With the partial release of teams’ negotiation lists on Tuesday, we’ve combed through the 90 listed players and put together a list of some of the most interesting names that caught our eyes.

The Heisman winner in 2016, Jackson is more of a long-term wait-and-see neg list stash for the Lions. Jackson’s results while at Louisville are unquestionable. What NFL people wonder is if he can take his athletic game to the next level. The 21-year-old is a bit of a gunslinger and some question his decision-making on the field. Would the mistakes pile up where the game is bigger and faster?

Regardless of the criticism around his game, pundits have him projected as a late first-round or a second-round pick in this year’s NFL draft. There’s been talk of Jackson’s athleticism opening doors for him in the NFL as a receiver or a returner as well, so even if he doesn’t pan out as a quarterback, he may still have options south of the border.

If Edmonton fans never see Brandon Zylstra in the CFL again, they can take solace in the fact that another Zylstra of a very similar build could be in the wings for them. As a sophomore, Shane Zylstra was the Div II Mavericks’ top receiver last year, with 51 catches for 861 yards and 15 touchdowns.

While in Edmonton last fall, older brother Brandon told Postmedia’s Gerry Moddejonge that Shane is his twin. Shane had a 204-yard game against Minnesota Duluth on Sept. 16 and a 147-yard game on Oct. 7 vs. Augustana. Watching his brother excel in two quick seasons in Edmonton, Shane says he’s already learned a lot about the CFL. 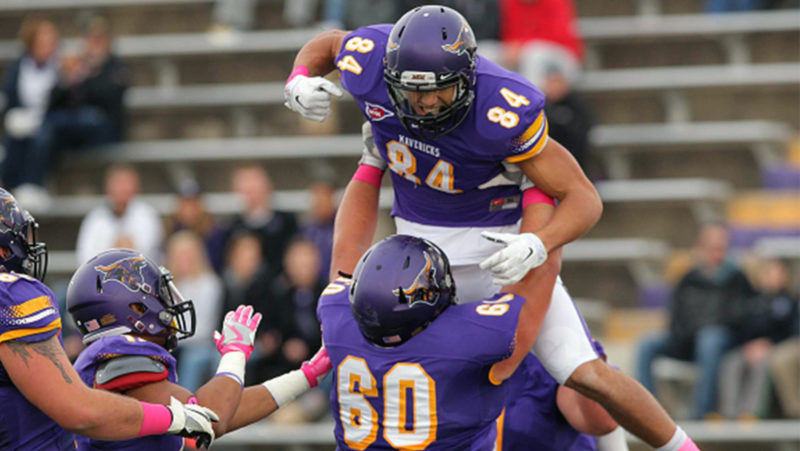 We’re far removed from Griffin’s phenomenal 2012 rookie year with Washington in the NFL and almost a year removed from his less than clean transition into football free agency. The opportunities have been limited for the 28-year-old since he was released by the Cleveland Browns, which in theory would make the CFL a possibility for him.

Many high-profile football players have come to Canada to show they can still play at a high level and to distance themselves from a rocky portion of their careers. Griffin’s style of play — a mobile QB with an arm — is what CFL teams crave and why the Ticats put him on their list. If he chose to give it a shot, he could be a great fit in the CFL.

Robinson is listed as a running back but he’s all about diversity. The 27-year-old was drafted into the NFL by Jacksonville in 2013 as a running back, but he started 26 games at QB for Michigan, before adding running back and receiver duties to his resume for his senior year in 2012. He spent four years on the Jaguars’ roster, rushing for 1,041 career yards on 259 carries and adding 310 yards receiving off of 47 passes.

An unsigned free agent, Robinson could conceivably play a utility role in the CFL, similar to what Kendal Lawrence, Roy Finch or Declan Cross have. Or maybe he’d want to zero in on one specific position. Kerry Joseph spent five years in the NFL as a safety before going back to the QB spot when he came north.

Murray is an interesting choice for the Argos. He had a brilliant college career at Georgia, finishing as the SEC’s leader in career touchdowns. He tore his ACL in his second-last game as a senior in 2013 and was chosen in the fifth round of the NFL Draft in 2014 by Kansas City. He bounced from there to Arizona and Philadelphia in 2016 and was under contract to the LA Rams briefly in the 2017 off-season.

On Aug. 1 last year, the 27-year-old became a colour commentator for the CBS Sports Network. His media gig aside, his path to the CFL isn’t that different from many of its present QBs. Would a shot at extending his career be enticing enough to get him out of the booth on a college game day? 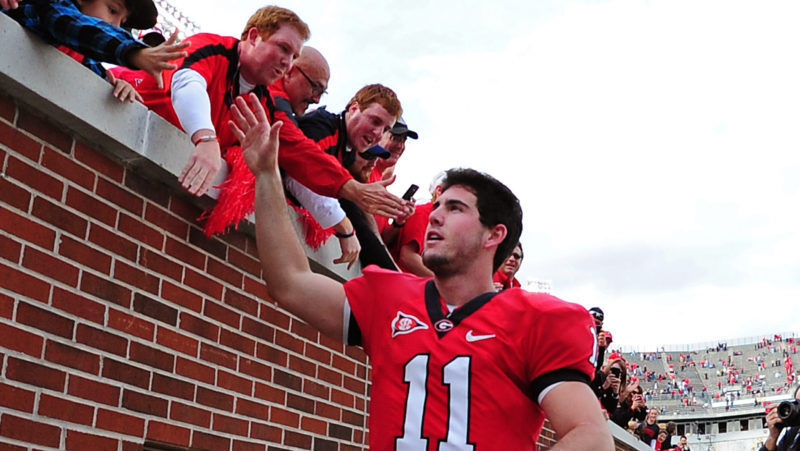 The SEC’s leader in career touchdowns, Aaron Murray could find himself on this side of the border (UGA Athletic Association)

A second-round pick of the Cleveland Browns in 2011, Little’s resume is reminiscent of Adarius Bowman’s. Both are around the same size and both played college football and basketball at North Carolina (Bowman finished his career at Oklahoma State). In his rookie year with the Browns, he led the team in catches and receiving yards.

After three productive seasons in Cleveland, Little was released and picked up by Cincinnati, with a brief stop in Buffalo in 2016 marking his last NFL destination. He’s been out of football for a while, but has the tools and resume of players that have come to the CFL and found success.

A long-shot neg list placement for the Als, but an intriguing one if it ever came to fruition. On the field, Kaepernick led the San Francisco 49ers to a Super Bowl appearance in 2013, where they fell to the Baltimore Ravens. Kaepernick, 30, has played in 69 NFL games and thrown for 12,271 yards and 72 touchdowns, throwing 30 interceptions. He’s rushed 375 times for 2,300 yards and 13 touchdowns.

Kaepernick’s name has surpassed the stratosphere of football over the last two years, as his protest of racial injustice in America has polarized him in national culture. While portions of the football fan base have clamoured for his return to the NFL — he remains an unsigned free agent — he has spent his time away from the game donating to charities and doing civil rights activist work.

With no response to the Alouettes upon the initial word of the team having his rights, it’s safe to guess that he has his mind on things that are bigger than football at this time.

A sixth-round pick by the New York Giants in the 2014 NFL draft, Jackson has always been a promising prospect that’s had injuries get in the way of the door opening for him. When he anticipated coming off of the Giants’ practice roster, he had micro fracture surgery on his left knee in 2014.

Jackson came back from that, looked like a promising safety in training camp in 2015 and tore his ACL in an August pre-season game. The Notre Dame product signed a reserve/future contract with Baltimore on Jan. 3, but is undoubtedly a player that the Stampeders will keep an eye on as the season progresses. 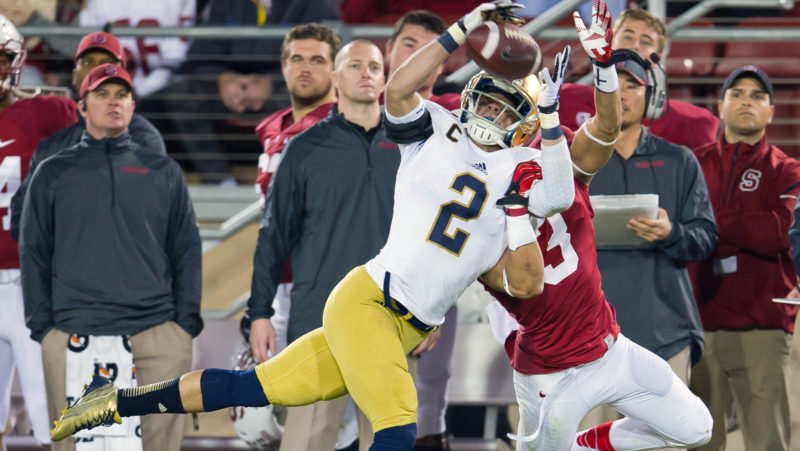 Count this as Chris Jones and his staff shaking every tree and looking under every rock for their next great young quarterback. McSorley, 22, is heading into his senior season at PSU, after throwing for 3,570 yards last year, with 28 touchdowns and 10 interceptions. He rushed 144 times for 491 yards, finding the end zone 11 times, showing a Doug Flutie-like feel (and frame) for the game.

There are high hopes for PSU in 2018 and they’re directly tied to McSorely. He seems NFL-bound at this point, but as we’ve seen time and again, a player’s journey can zig zag all over the map, sometimes crossing the border.

When you put the numbers together on Flowers, they come together to make the recipe for a successful CFL quarterback. At a listed six-feet, he’s undersized at South Florida — the same school that produced S.J. Green — but his stats are likely what stuck the Bombers’ eyes on the 23-year-old. He’s thrown for 8,124 yards through a four-year career at SFU (he had light usage his freshman year), completing 57.7 per cent of his passes for 71 TDs and 23 interceptions.

When he gets out of the pocket, Flowers is a nightmare for opposing defences. He’s rushed for 3,672 yards, including an eye-popping 1,530 yards in 2016. He followed that up with 1,078 yards on the ground as a senior. That dual-threat ability should have Kyle Walters and Mike O’Shea very hopeful that Flowers could make his way to training camp in the not-too-distant future.

The June Jones influence could be strong on this selection, with Milton having grown up and played his high school football in Kapolei, Hawaii. Jones was the head coach of the University of Hawaii from 1999 to 2007 and his knowledge of the talent there still runs deep.

Then there’s the actual football part of the choice. Milton was dominant in 2017, his sophomore season, leading an undefeated (and self-proclaimed national champion) UCF team with 4,037 passing yards and 37 touchdowns, with nine interceptions. He rushed for 613 yards (5.8 yards per carry) and eight touchdowns. A

little undersized in the States, Milton fits the bill for a QB in the CFL. It’ll be a few years before we see how he transitions to the pro game and where he lands, but Milton is a good long-term pick by the Ticats.