Theismann reflects on the life of legendary Argo Leo Cahill 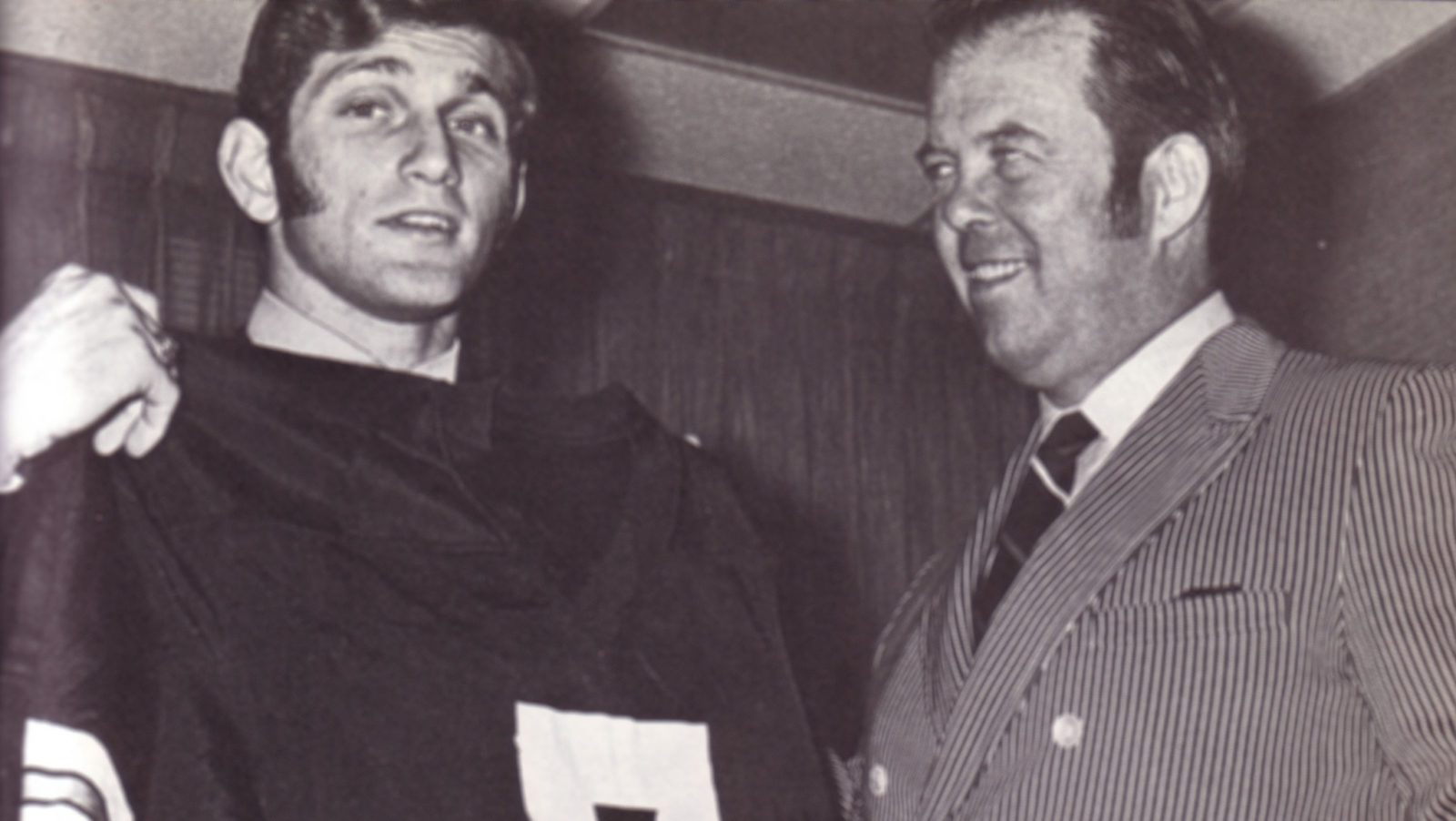 Theismann reflects on the life of legendary Argo Leo Cahill

Forty-one years later, with the aid of the softening effect that time has on memories, the 1971 Toronto Argonauts were reunited for the 100th Grey Cup.

Forty-one years will bring the obvious and inevitable changes that await us all on our journeys, but for some people, some things manage to stay perfectly preserved.

“One of the most memorable moments I had in sports was during the 100th Grey Cup in Toronto,” former Argos QB Joe Theismann said, taking a break on the 15th hole of a round of golf at a country club in Florida.

“We were all together. We were looking at film, studying the Grey Cup game and Leo came in and surprised us. All of a sudden, boom, there he was, talking to us with that grin on his face. He should be in the hall of fame for his smile, if for nothing else.

“If you look at pictures of Leo, imagine that Cheshire Cat with that grin. That’s Leo. There was always something going on behind those eyes. He was always thinking about something, that next move, that next acquisition. He was a great ambassador for the CFL.”

One of the quotes that will forever be attached to him came in 1969, after the Argos won the first of a two-game playoff series (they actually did that back in the day) against the Ottawa Rough Riders. Cahill told the press it would take an act of God for the Argos to lose this thing. In bad weather (which Cahill later said was the act of God he was referring to), Ottawa ran away with a 32-3 win and took the cumulative series 46-25.

The other, more famous quote came two years later, when the Argos lost a heartbreaking Grey Cup game against the Calgary Stampeders. Running back Leon McQuay slipped late in the fourth quarter, deep in Calgary territory, fumbled the ball away and the Argos lost 14-11.

“When Leon slipped, I fell,” Cahill said after the game.

“He’s the greatest promoter Canadian football has ever seen,” said Paul Woods, an Argos historian who is currently working on a book about the Grey Cup-winning 1991 Argos squad. “I don’t think there’s anyone else that’s come even close to being able to sell the game and build up buzz and excitement for the team, the league and so on.

“He was just a master at getting attention and really arguably the peak periods of the Argonauts being in the sporting consciousness were both with Leo there.”

Cahill was a master recruiter and at a time in football when the CFL could offer comparable contracts to the NFL, he lured some major U.S. talent to Canada to come play for him. Theismann, running back Leon McQuay, safety Tim Anderson and defensive lineman Jim Stillwagon, to name a few, were All-Americans as college players and suited up for the Argos, thanks to Cahill. 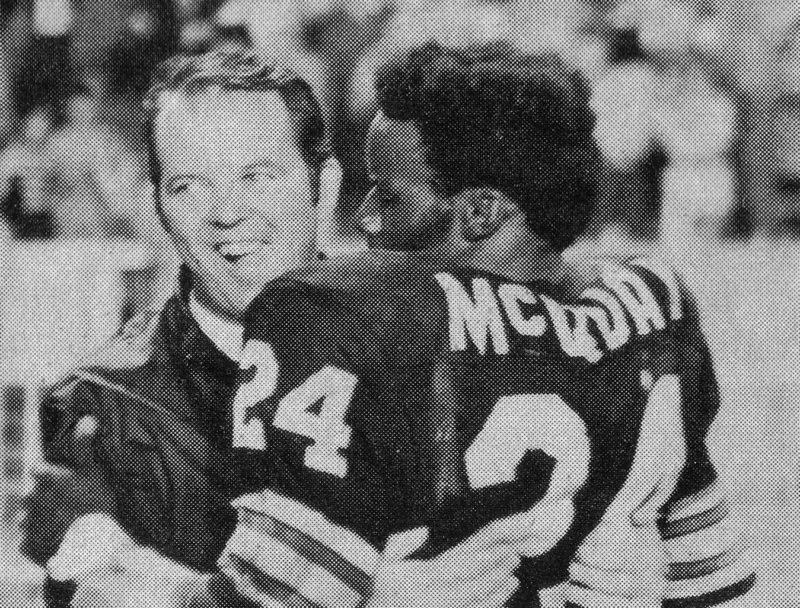 The outlandish, say-anything demeanour of the coach trickled down to his Argos teams. There was a wildness to Cahill’s teams, the locker room generally a place that was policed by a handful of veteran players. The Argos were 55-60-1 through Cahill’s eight seasons on the sidelines.

“He trusted us to be men. We never had a lot of rules; not that they would have mattered to this group, but Leo knew that right away,” Theismann said. “I think Leo felt more like the ringmaster of a circus at times than he did the coach of a football team.

“We did have a group of characters. It was at a time when society was changing. You had the bell bottoms and the big lapels and the seersucker suits. You had the draft dodgers, everything that was going on at the time. A lot of guys went to Canada to avoid the draft.

“So you had all the signs, the love children and everything else. It wasn’t just a time in football. It was a time in society that was very unique. Leo was the perfect coach in that period of time.”

“One of the reasons I became a fan, partly was because my dad was an Argos fan, but they were a cool team,” Woods said.

“I once described them as the first adult males that I ever saw that had long hair. I grew up watching the Beatles and Ed Sullivan. I wanted long hair from the time I was seven years old, but adults weren’t wearing long hair. Then all of sudden the Argos had Mel Profit and all of these guys with hair sticking out of the back of their helmets and they just looked so goddamn cool.

“I just loved the look of the team and the feel. They had a swagger about them and I think that was because of the way that Leo was. Leo had that impish grin. Sometimes he could look sarcastic and he could be smoking a cigarette on the sidelines.

“He seemed to embrace the notion that he wanted iconoclasts, he wanted guys that wore turtlenecks instead of ties and wore big mustaches and had long hair and partied and all that stuff.

“It was the first sports team that I was aware of that being a rebel and being a wild person was not only allowed but encouraged in a way. Later we saw Charlie Findlay and the Oakland A’s and all that but I think the Argos were three or four years ahead of that stuff.” 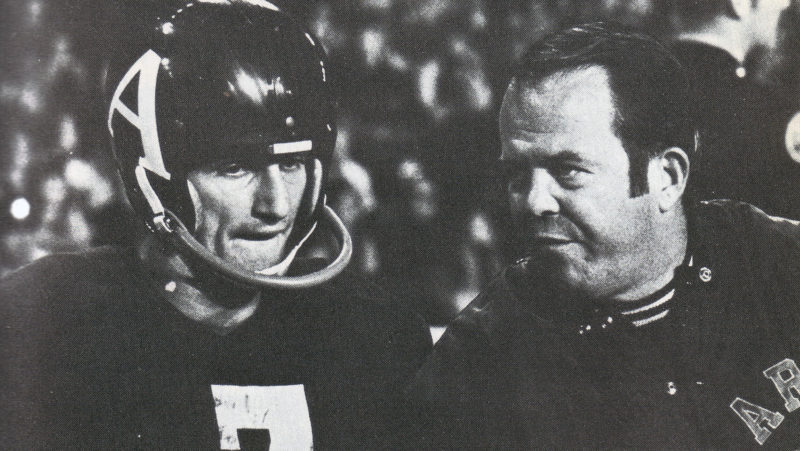 Joe Theismann and Leo Cahill spent two years together with the Argos, from 1971 to 1972 (Toronto Argonauts)

Jonathan Rubinoff first met Leo Cahill in 2005, 27 years after Cahill last had an official capacity with the Argos. Rubinoff, now the managing editor of CFL.ca, was working for the Argos then as the coordinator of public relations and alumni relations. The team had reached out to Cahill, who lived in Sarnia, Ont. at that point, to be a goodwill ambassador for them.

Rubinoff eventually became the go-to guy for all things Leo Cahill. He’d bring him to events the team was hosting, make sure he got his per diem and that he was comfortable. On game days, he’d ensure that Cahill made it to Rogers Centre. As Cahill got into his 80s, a car service replaced his parking pass.

“Leo was sort of like an older version of Pinball,” Rubinoff said. “You’d walk him through the halls and people of that generation would see him and be like, ‘Leo Cahill!’”

A friendship grew out of those events and game days spent together. For Rubinoff, it was a kind of surreal look at the teams he heard so much about growing up.

“My grandfather and my father were Argos season ticket holders. Leo was like my dad’s idol,” he said.

“It was very cool for me to be working with guys like Bill Symons and Mel Profit. So I’d ask my dad stuff about Leo and then I’d ask Leo stuff about Leo.”

Rubinoff read his dad’s copy of Cahill’s book, Goodbye Argos, to get Cahill’s backstory. Before games, he’d meet Cahill and his son Terry and just listen to him. There were stories about Cahill’s time in the army. About how he played in the Rose Bowl. About how how he staked out Theismann in the lobby of the Royal York hotel in downtown Toronto until he’d signed him. About how while between his stays with the Argos, a coaching job with the Memphis Southmen led to a friendship with Elvis Presley.

He soon came to know these ’70s Argos teams inside and out, even though they were before his time.

“It was cool because I was able to get the fan perspective of a my dad, who grew up idolizing (Cahill) at a time when the Argos were untouchable here and Leo was a legend,” Rubinoff said. 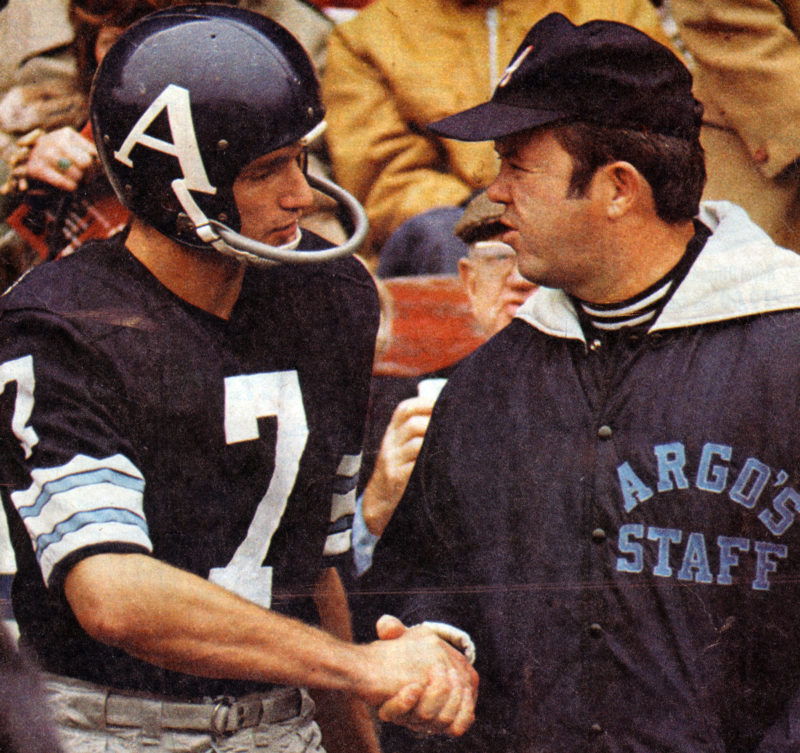 “Leo would tell me about the Ice Bowl and the Act of God game and what the game was like in the locker room.

“In some ways he was very combative as a coach but he loved his players. He didn’t want unrest. I got sort of a window into his personality after the fact and he was a sweet, older guy, his coaching days were behind him but from time to time when he’d tell you something you could see that personality come out again.”

He saw the two sides of Cahill collide during an Argos reunion in 2007. On the field, Cahill came across as a tough, take-no-guff type of coach. By the time the all-time Argos came together, Rubinoff found out that Cahill was haunted by how things had ended with one of his favourite players, in Mel Profit. Cahill cut him and the two hadn’t spoken since. At the reunion, with Profit back in Toronto for the first time in over 30 years, Cahill was very nervous.

“We had this dinner and we’re going to bring all these guys up on stage and behind the stage area we had all the guys signing helmets for auctions. And no one could find Leo,” Rubinoff said.

“He was in a back closet area and he’s sitting there and his left leg is shaking. I go, ‘Coach, are you OK?’ He says he’s fine and asks if Mel is out there. I told him he was and Mel’s still a huge dude.

“I start laughing and he’s telling me it’s not funny. It didn’t end well.”

Rubinoff had to go talk to Profit and tell him that Cahill wanted to see him but was timid about it. Profit brushed it off and told him to get Cahill out there.

“They had this big embrace, they both started crying,” Rubinoff said. “Mel got up at this speech and he was still in tears. I guess those things stick with you.”

He may have had that tough coach image when he held the job, but his players loved him.

“Leo coached me in ’71, ’72 and John Rauch took over in ’73. I would have stayed and played for Leo forever,” Theismann said. “Sure, I wanted to go back to the NFL, but Leo was just fun, he was different. He was unique, he was a personality. He was all of those things that were cool, in my mind, back then.

The Grey Cup proved elusive for Cahill as a coach and GM, but he did get a championship ring on his finger eventually. As an ambassador, the club made sure he was included in the celebration of Toronto’s Grey Cup win in 2004.

“My sympathies and my prayers go out to his family,” Theismann said. “I would like every one of his family members to know that he made us a part of his family too and that’s why we grieve the loss of him so much.”