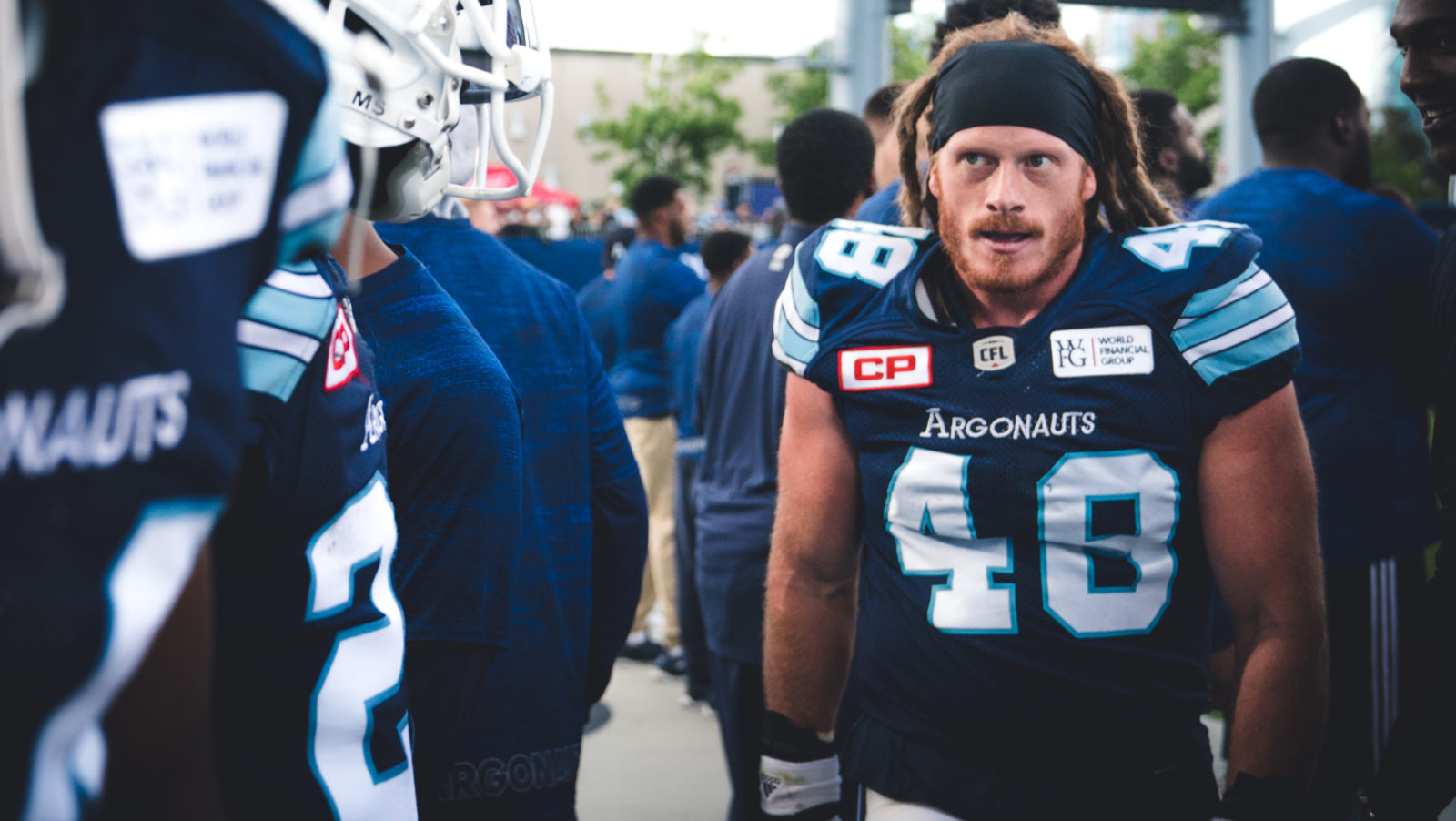 It’s only been three months since the Toronto Argonauts dramatically won the 105th Grey Cup presented by Shaw but for linebacker Bear Woods, the win is now a speck in the distance in his rear-view mirror.

“I’m down from the high to be completely honest with you,” Woods said over on the phone on Thursday from his home in Alabama. “After leaving my teammates as far as we all went home, it kind of ended for me. Going back home and leaving Toronto, you’re so far removed from the CFL. Although, it’s still my life and I still think about it everyday, you’re just far removed from it.

“The high is definitely gone for me but the high has turned into hunger.” 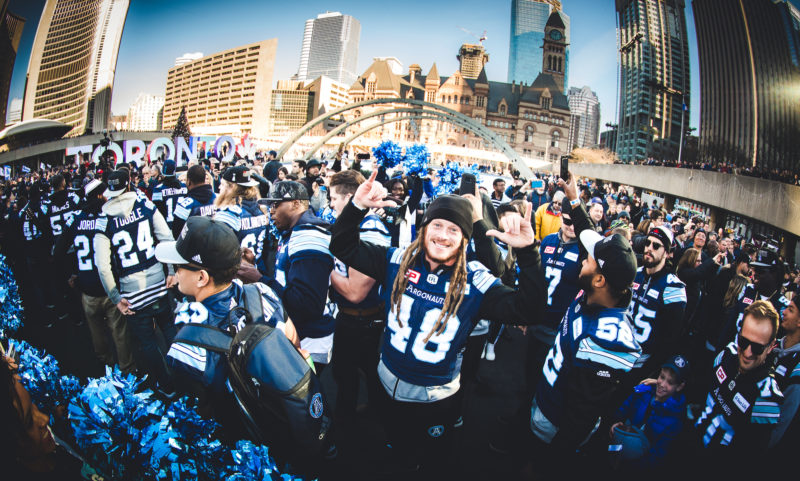 After taking a few days to weigh his options, Bear Woods decided to come back to Toronto in 2018 (Johany Jutras/CFL.ca)

After finishing his fifth season in the league with a Grey Cup ring, the 31-year-old became a free agent on February 13. As many CFL players do when their contracts expire, Woods decided test the waters to see other offers that could be on the table from teams around the league.

Just about a week after the market opened, and after weighing his options from other squads, Woods came to an agreement with the Argos, signing a deal through 2018.

“There was a time frame there to where there was opportunity to look elsewhere but Toronto was where I wanted to be,” said the middle linebacker. “We got a late jump on it but we ended up getting things correct and we’re so excited. When it’s all said and done I got to be right where my family and I wanted to be so it’s such a blessing.”

Under an hour after Woods’ new contract was announced, the Argonauts announced that they were bringing on Taylor Reed – a middle linebacker who recently suited up for the Ottawa REDBLACKS before becoming a free agent himself.

With both Woods and Reed usually lining up at the middle spot, the job is either players for the taking. As Woods knows first hand, there are no guarantees of a starting role during training camp.

“Training camp, I learned first hand last year in Montreal being cut on day one, this is a business. With our group we had last year, we have a lot of great linebackers on our team and we all played last year and it all worked out. I’m glad to have him on the team. Yes, it’s a competition but we’ll figure all that out once training camp comes.”

Heading into camp this spring, that competition will be on full display as the Argonauts boast one of the deepest linebacker corps in the CFL.

To go along with Woods (a two-time East Division and CFL All-Star) and Reed (a 2016 Grey Cup Champion), general manager Jim Popp has put together a group that includes Khalil Bass, Marcus Ball and Terrence Plummer. All players that can, and have, been starters in defensive coordinator Corey Chamblin’s defence. 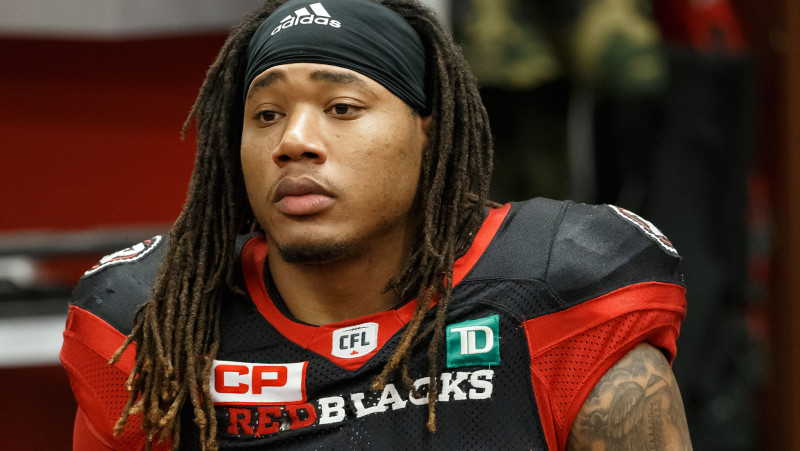 Taylor Reed joins the Argos after spending time with the Tiger-Cats, Stampeders and REDBLACKS (CFL.ca)

Bass joined the Argonauts in October of 2017 after being released by the Ottawa REDBLACKS in September of that same year. In 12 games between the two teams, the 27-year-old collected 40 tackles and two sacks.

In his return to the Canadian game last season, Ball played in 14 games and tallied 57 tackles, seven special teams tackles, two interceptions and one forced fumble. While Plummer made six starts in the 16 games he suited up in last year and tallied 32 tackles and six special teams tackles. He also started in the Grey Cup, recording four tackles and a pass knockdown.

“There’s two positions out there, MIKE and WILL, and have three sets of guys that can start at those two positions,” Woods said. “Three sets. That’s as deep as I’ve ever seen. That’s exciting. I know that’s Jim Popp’s job to go out there and find the best guys and it’s always been that way since I got into the league in 2011, my first camp in 2012, he always signs the best guys who are available.”

Popp and the Argonauts were busy heading into and during the free agency period, locking up a few other key pieces on their defence.

So can the Boatmen keep the momentum of their 2017 campaign going and play for the Grey Cup in Edmonton this November? If you ask Woods, the answer is yes, they can, but it won’t be easy.

“When you look at what other teams accomplished last year, everyone’s so close,” he admitted. “I really think the league itself is so competitive, and it always is, but teams really have an opportunity and that’s going to be our goal, to repeat and I don’t see why we can’t (repeat as champions).

“We got Ricky back and we got a lot of big time players back and added some guys so we should be well on our way to be able to start mini-camp and be competitive from day one.”