From The Sidelines To The Stands: Saying Goodbye To The CFL (Sorta)

From The Sidelines To The Stands: Saying Goodbye To The CFL (Sorta)

It was an overcast day in Mississauga. I went to the wrong field, I wore the wrong clothes and had no idea what I’d got myself into.

“Ya, you can wear jeans or khakis or even shorts.” Was probably the first thing (then Argos intern, eventual PR super power) Anton Bennett said to me when I walked to the Toronto Argonauts media trailer wearing dress pants, a purple shirt and dress shoes.

That was in 2012.  That year the Toronto Argonauts would go on to win the 100th Grey Cup at home and would be the beginning of a journey I will never forget.

Social media was an unknown. “Why don’t we have an Instagram?” I asked on my first day.

“Our phones don’t have the app.  If you wanna create one, you do you new guy.”

That’s how long (and not long) I’ve been a part of this league.  INSTAGRAM WAS NEW. And now is something many of us check 20 to 30 times a day.  Twitter? It was a thing. But was mostly home to press release style tweets and grainy photos.  I think this is my first ever Tweet:

I was so nervous live tweeting the 2012 Grey Cup game, the tweet where we announced we won?

It has a typo. *your

To all my 2012 Argos staff, now you know why screencaps of that tweet never ended up in any post reports.

After that the gloves came off.  All credit to then Director of Communications Eric Holmes for allowing me to spread my wings and do what I felt was right and fun.  Because social media is a place for fun.  That is how I’ll always view it, regardless of what the trolls do to bring you down.

It lead to some hyjinx…

(which was followed by cold sweat and panic when we were sharing a plane home with the Ticats staff).

And to some amazing moments…

From there it was off to the CFL where I would take over Social for the CFL and join an amazing team filled with some of the hardest working, creative minds in the industry.  A big time shoutout to Christina Litz & Sean Bell for making that happen, for being the biggest fan of #MemeWarMonday and suggesting in my first week that I should do a video series with Brodie Lawson even though I had no prior on-camera experience and my only hook is that I like bowties. BUT I REALLY LIKE BOWTIES SO MAYBE IT WAS ENOUGH!

We did some amazing work.  We tweeted using emojis before emojis were cool, we launched a new brand #WWMO and logo in the secret of the night, new adidas jersey’s with our friends at Twitter & Vine, took Canada by storm at the perfect moment with #DiversityIsStrength, travelled to the East Coast, South Pitsburg & The National Cornbread Festival, 3 Games in 3 Days by plane, 4 Cities in 4 Days by truck, To Brad Sinopoli’s house to feed his dog, front row seats to the final game at New Mosaic, the first ever #MarksCFLWeek and a #CFLThisWeek Live Show, the first of its kind in Canada in partnership with Twitter.

Oh, and this is still a highlight moment:

Also that time I rode in a helicopter with the Grey Cup, Commissioner Orridge & Damon Allen.

The #GreyCup has landed in the #6ix! pic.twitter.com/Iqt2HS6CKx

From there I was able to connect with without a doubt, the best fans in sports.  I’ve been to a Super Bowl, I wore a signed Marcus Ball jersey, he was on the Panthers at the time.  You go and it’s people who like the two teams and locals.  That’s it.  You go to a Grey Cup and it’s everyone.  People just love the league, they love the game and it’s about seeing old friends, making new friends and causing a ruckus in whatever city decides to host Canada’s biggest party.

And it all came full circle this November, on the field for the 105th Grey Cup celebration and this image… 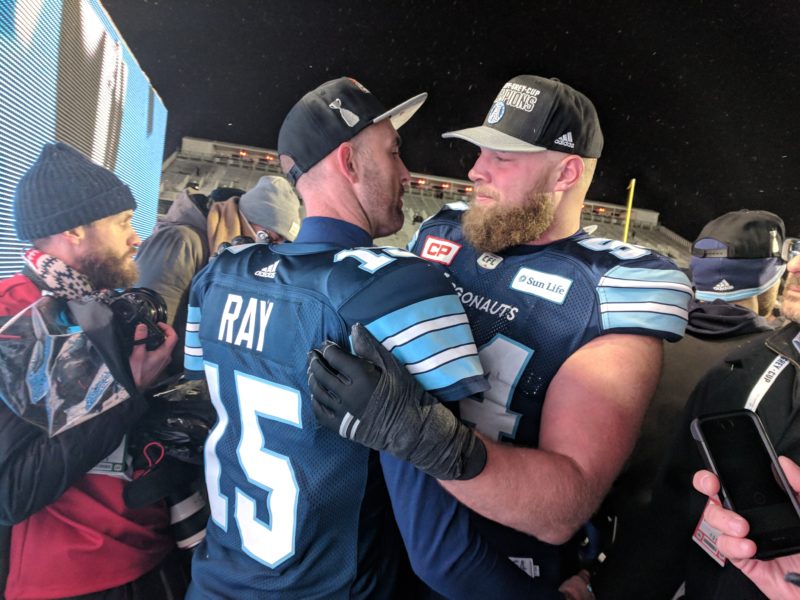 Two guys from my first 2012 season.  Still in the league.  Still with Toronto. Back on the top of the mountain.  Being up close and personal for these stories and moments is something I’ll miss.  Being on the inside, on the field and on the sidelines. But all great things come to an end.

And now it’s time for me to join the other side. It’s time to go for a paddle on the Ottawa canal with the Lumberjoes and the cast of Ottawa REDBLACKS hooligans they associate with.  It’s time to go give out police violations with the GC Fun Police (I am an official Officer after all), time to hit the tailgate (for real) with all of Rider Nation… Pfiffles bahds and Macho Man Rider Savage you are my spirit animals. And you can book my Argos Season Tickets already… Clay, Travis & Lori ArgoDiva… where do you guys sit?  I need a recco.  First beers on me :).

It’s time to become a fan.  I am leaving the Canadian Football League as an employee.  But joining the Canadian Football League’s army of fans.  Championing Canada’s game from the other side.  Starting on March 19th I will be moving to work for WE as their Director of Social Media.  I am excited for the opportunity but above all, want to thank all the amazing people that have liked an Instagram, RTd a Tweet or watched a Snap Wrap.  I will forever remember the experience and it is what has defined my 20s.

Now onto some thank yous that you can choose to read, or not cause I’ve already taken up enough of your time…

The digital and content team at the CFL… Jonathan Rubinoff the mastermind and my #1, my wing woman Brodie Lawson, (ok, ya I’m her wing man. She is killin’ the game. Just remember who got you verified on IG), Jeff Krever serving up the hot takes, Kyle Scott who got me into NCAA Football (Go Clemson!), Kicker extraordinaire Mark Urban, selfie queen Kristina Costabile, the shutdown corner of my heart Davis Sanchez, the silent but deadly Chris O’Leary and our countless interns and jr. coordinators. And also regretfully Rob Hynes.

Bob, my right hand man.  The keys to the car are yours and proud to leave you in the driver’s seat.  Fans, you’re in good hands and gigantic biceps.

The decision makers in my time at the CFL.  CL for always making me try new, do new, do better and for always having the desire to be the best. Dice-Dice Baby for pushing me, especially on #CFLThisWeek.  I promise to keep the energy up, always and forever. Vanessa, Sean Bell, Dykstra, Matty Maychak, Kevin McDonald, Greg Dick, Jim & Sue Lawson, Jeffrey Orridge and most recently Randy Ambrosie. There is a vision.  There is a plan. And I can’t wait to see how it all comes together. The league is in amazing hands with Randy.

Of course all the other departments and peeps I love and have made this decision one of the hardest of my life. Luchhchhc and comms, Noivo, Perrissinii (sp?) Stone-Dog, Mox, Celine the watch dog & the events peeps, Vezatron the CFL Collector, LDP & the creative team (Mo+Marcus), Garvo & the Sponsorship squad, Tyson RJ, Hardy, Curt, Hack,and au revoir to the LCF bros OP+GT.

To the CFL team staff.  The crazy passionate people that make the league tick. Thank you for putting up with all my shenanigans, requests and borderline questionable tweets at times PR guys past and present with an extra tip of the hat here: Cartmell, Rose, Jean, Pollock, Darren Cameron, GoGo, Sharkey, McNaughton, Graeme, Barre & Charles.

To the CFL players and coaches.  Without you the league doesn’t exist, we have nobody to talk about and I have no tweets to write. From early days in Argo Land to the later days at the CFL. Professionals through and through and I can’t wait to watch what they bring in 2018. Some gents that have been especially awesome over the years… Ricky Ray, Chad Owens, Chris Van Zeyl, Chris Jones for opening his home to Brodie & I, Trevor Harris, Zach Collaros, Andre Durie, Mike Reilly, Andrew Harris, The Buds, Scott Milanovich and the entire Argos 2012, 13 & 14 staff, Adarius Bowman, Matt Black, Lemontaor, Jerome Messam, Bo, Damon Allen, Natey Adjei (my job is open if you want it), The Manny Show, Simmy Hov Alex Singleton and to anyone I missed, just call me out on Twitter ;P

To the media.  From humble  beginnings in the Argos media trailer with Zic (you are a legend and will never see this), Hogie, Landry, National-Post-Yet-To-Be-TSNafied-Scianitti, Dan Ralph, the Pitbull, The whole Toronto Sun staff.  To anyone I’ve tweeted with in my time at the CFL. The folks at TSN.  Some incredibly passionate individuals on the broadcast team and of course, the Bar Down boys on TSN Social… DK, Danny Wright, Luca and the whole squad there.

Our partners, Christopher, Laura, Shay and Cam at Twitter Canada for all the amazing, progressive and innovative work we’ve done over the last 6 years.  Marc at Facebook/Instagram Canada for always helping us do cool stuff.  Johany for making my life easy with fire photography and our writers and media for keeping the conversation going. Garet at Shaw, Jimmy, May & the Keg crew, everyone at Mark’s, and everyone we’ve worked with at Hootsuite. Landry, Marshall, Cybulski, Nye, Steinberg, Morris I’ll make sure I log some page views on your stuff and be the Waggle’s #1 downloader.

To Lily, who let me do this crazy job for the last 6+ years even though it meant always being on my phone  :).

Those that came before me in CFL social… Richard Obrand, Jaime Stein.

And to those that will come after… you’re about to join a place and community like no other. And fans who love this Tweet every year.

A place filled with the most special people, a special game and one of the few purely Canadian institutions.

See you in the stands at BMO, Tim Horton’s Field, TD Place, Percival Molson, IGF, New Mosaic, McMahon, BC Place and maybe even this November in Commonwealth.  If you see me, say hi and lets grab a pint or two.