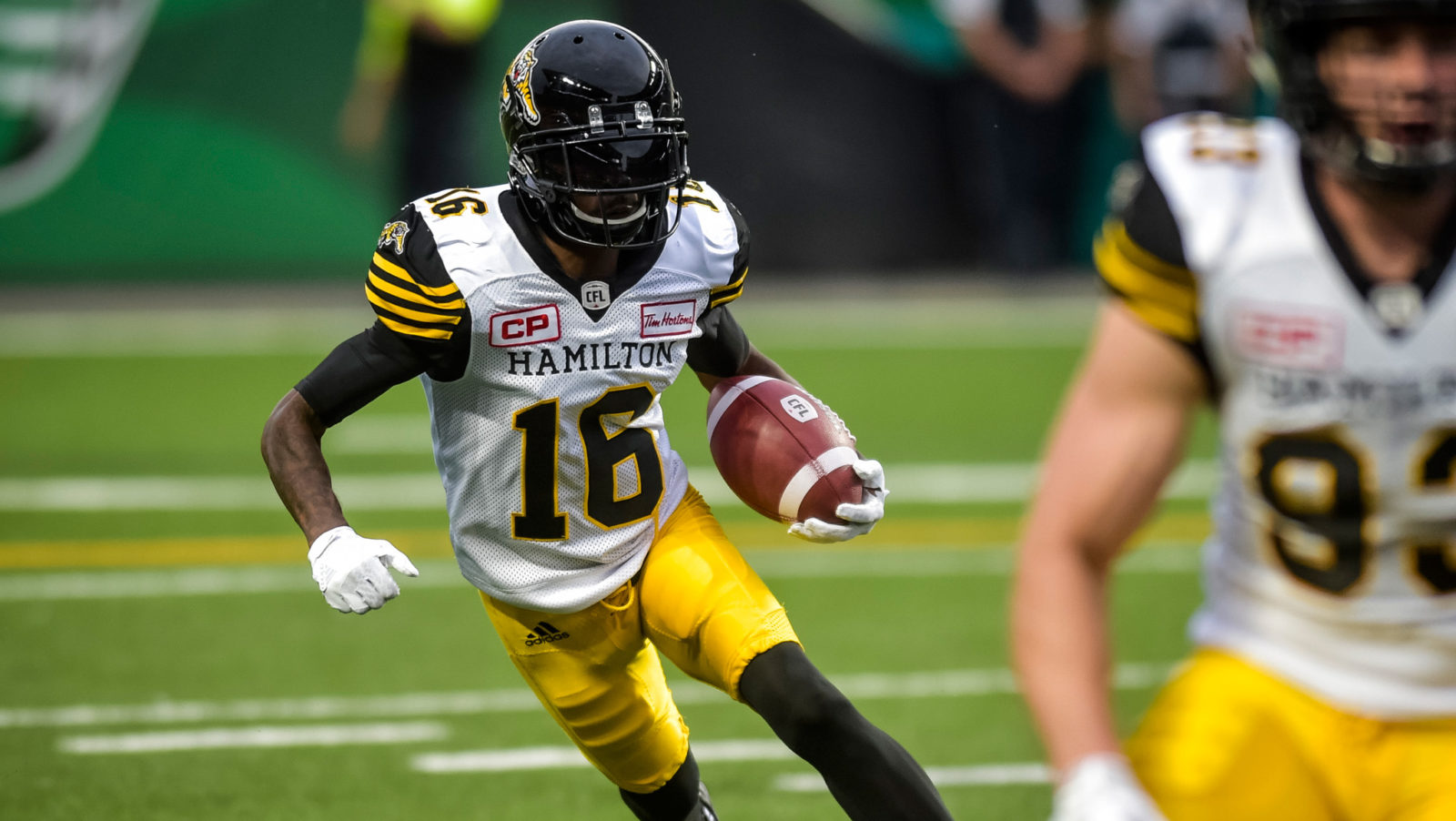 So much of the focus during 2018 free agency has been on players changing addresses, but we’ve seen some really important players staying put, too.

With literally hundreds of free agents across the league this winter, we knew a large number were going to re-sign, and that’s exactly what happened. Of the myriad extensions signed, though, there are four important ones seemingly flying under the radar.

An unfortunate mistake and the ensuing criticism didn’t shy the Stampeders away from bringing back a really talented receiver. Jorden was the focus of intense scrutiny following his fourth quarter fumble in Calgary’s 105th Grey Cup loss to Toronto, but was one of the team’s first pending free agents to sign an extension. It’s not hard to figure out why.

Sure, Jorden’s fumble led directly to a game changing touchdown and, yes; teammate Marquay McDaniel had some harsh words following a heartbreaking Grey Cup loss. But there was no way the Stamps were going to let those things deter them from re-signing one of the league’s most promising receivers. 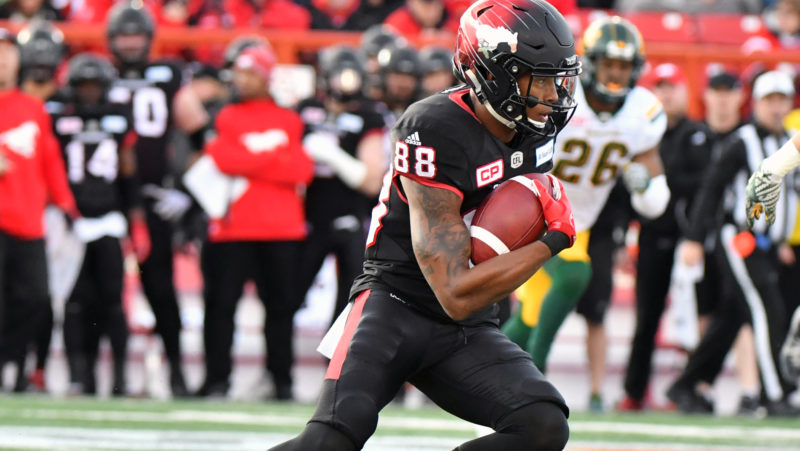 Known for his costly Grey Cup fumble, Kamar Jorden had a productive 2017 for the Stamps (Larry MacDougal/CFL.ca)

Jorden’s 2017 pace in 10 appearances was impressive. With 717 receiving yards and six touchdowns, Jorden was extremely productive when healthy. Over a full season, Jorden would have been on track for almost 1,300 yards and 10 touchdowns, which would have put him among the top four CFL receivers in both categories.

Much of the conversation surrounding Calgary’s off-season has been focused on the significant changes they’ve made and big name veterans they’ve parted ways with. One of their most important transactions, though, was their early re-signing of Jorden, because this guy looks poised for a true breakout season.

I’m under no illusions White will be Edmonton’s number one tailback in 2018, because under ideal circumstances he won’t be. But that doesn’t mean bringing him back for another season in green and gold is a bad call. In fact, I think the Eskimos made a very savvy choice by coming to terms with White.

There’s no doubting the risk factor with having White in the fold; he suffered early season-ending injuries in two of the last three seasons. There are valid questions about how effective White will be after missing virtually the entire 2017 season due to reconstructive knee surgery. Edmonton is a team in a spot to take that risk, though.

The Esks hit pay dirt with their late season acquisition of C.J. Gable and, after signing an extension, he’ll be back for his first full season with the team in 2018. Gable will be Edmonton’s feature back this season and I expect him to pick up right where he left off. In fact, I think he has a chance to be even more effective with White behind him on the depth chart.

When healthy, all White has done is rack up yards in this league. His 2016 campaign, after missing the prior year with a ruptured Achilles, was dynamite; he racked up 1,350 total offensive yards and nine touchdowns as one of the CFL’s most productive backs.

While it’s anything but a guarantee, if White can return to form close to that, the Eskimos might end up with one of the best value signings in free agency. He should be as motivated and determined as ever, after all. If it doesn’t work out, oh well, it’s a low risk signing at a position of strength; it seems like a no lose for me.

On the surface, you might look at the year Banks had in 2017 and wonder what happened. Always known as one of the CFL’s most devastating threats in the return game, his numbers seemed to fall off a cliff last season. Year over year, Banks was down more than 200 punt return yards and a whopping 600-plus kick return yards. There’s a simple explanation why, though.

After being used primarily and, at times, almost exclusively as a special teams threat, Hamilton made Banks a focal point of the offence last season and the results were very impressive. “Speedy B” finished 13th with 1,011 receiving yards and tied for third with eight touchdowns last year and I think we’re talking about true signs of things to come. 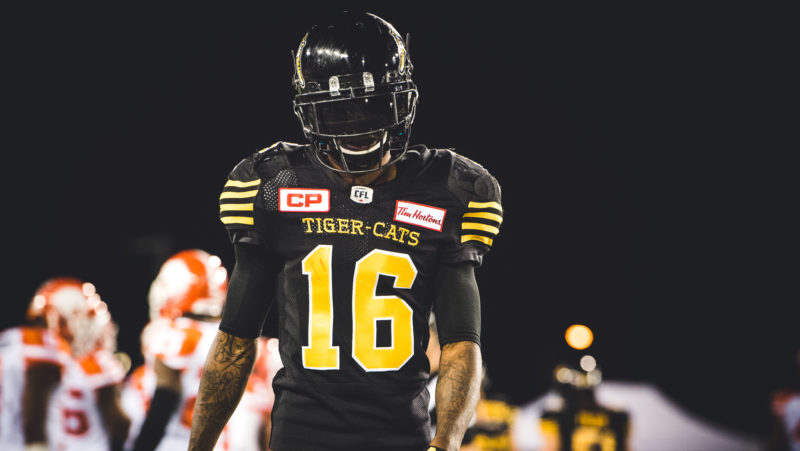 Brandon Banks had the majority of his 1,000-plus yards from Labour Day on (Johany Jutras/CFL.ca)

With Zach Collaros at quarterback, Banks was seldom used in the receiving game, totaling eight catches in eight games. Once Jeremiah Masoli took over from Labour Day on, it was a completely different story. Banks racked up all but 52 of his 1,011 receiving yards in the eight games with Masoli behind centre, which bodes well for 2018.

The Ticats have made their choice at quarterback going forward. By moving Collaros to Saskatchewan and extending Masoli this winter, they’ve settled on the latter as their guy. With Banks back, too, I’m really excited to see what these two guys can do over the course of a full season.

Woods is in the same camp as White in that neither technically signed contract extensions and are instead classified as re-signings. That’s because both players signed following the opening of free agency, but in reality, both are extending time with their teams. For Toronto, bringing Woods back really solidifies what looks like a solid group of linebackers.

In his first year with the Argos, Woods finished sixth overall with 90 defensive tackles with one fewer game played than his contemporaries. It was a second straight season with 90 or more tackles for Woods as he helped Toronto to an impressive Grey Cup victory. I don’t see him dropping off in 2018.

Woods is part of an impressive group of linebackers in double blue, with him and Marcus Ball returning for another full season. Oh, and then there’s Taylor Reed, who was one of the five guys with more tackles than Woods last season at 94; the Argos brought him in from Ottawa in free agency.

With the addition of Reed, it wouldn’t have been totally out of the question for Toronto and Woods to part ways, but they found a way to keep him. His second year with the Argonauts may not be as prolific in the tackle department with who else he has alongside him, but that’s okay. At least on paper, Toronto enters 2018 with one of the CFL’s top groups at the position.

Speaking of the Argos, they made another under the radar decision this month that could end up paying big time dividends. While it hasn’t been officially announced, Toronto is expected to hire Anthony Calvillo as a quarterbacks coach. Boy oh boy does that put together one incredible group of offensive masterminds.

The match makes a ton of sense when you take a second to think about it. On the field, Calvillo had immense success with Marc Trestman as his head coach in Montreal. Now at the helm in Toronto, you can see why Trestman would be all over bringing Calvillo into the offensive coaching field. 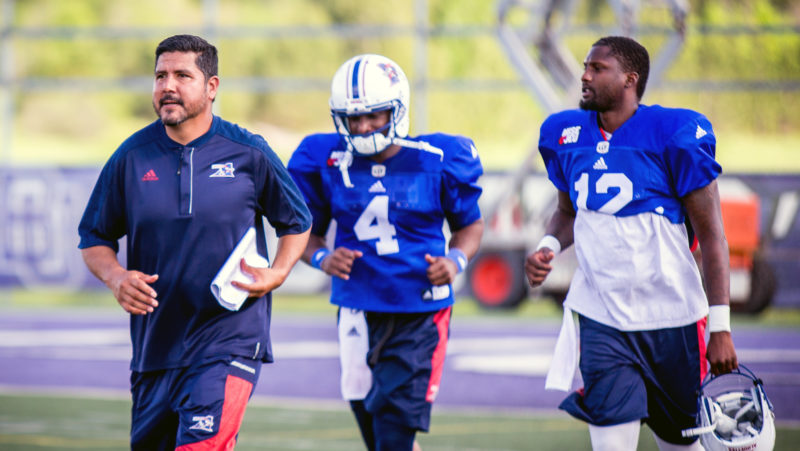 Now you can throw one more Hall of Fame brain into the conversation: Ricky Ray. The reigning East Division Most Outstanding Player is coming back for another year after a resurgent season in year one with Trestman. With Calvillo set to join that brain trust, I would LOVE to a fly on the wall during those offensive meetings.

You know who could stand to benefit most from all of this? James Franklin. Toronto’s big time trade acquisition was already in a great spot to develop with Trestman and Ray leading the way, and now will get to work one-on-one with Calvillo on a regular basis. When Franklin presumably takes over the starting role in 2019, he’ll have completed quite the training program.