Ferguson: The drive to become bigger, faster and stronger 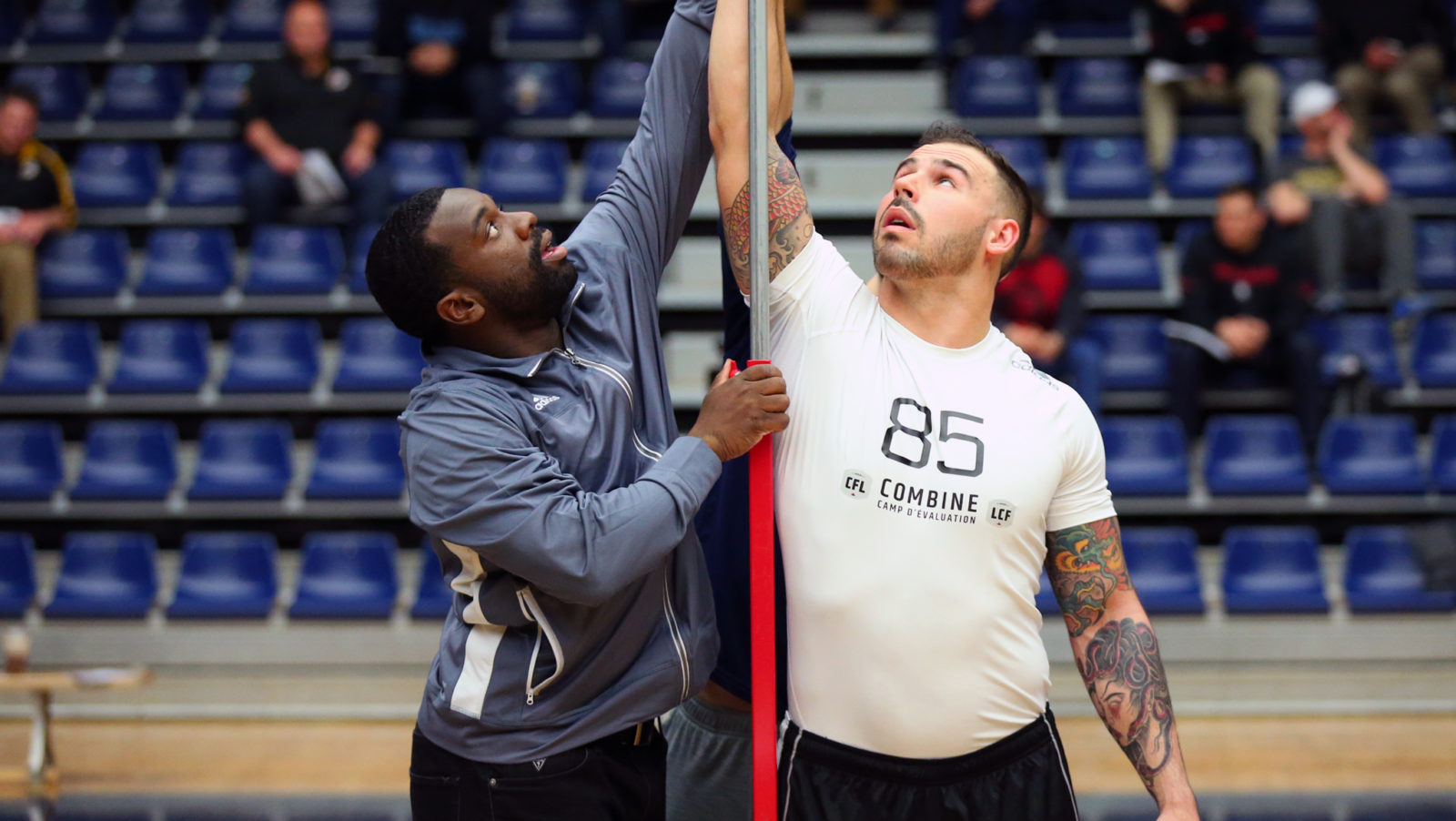 Ferguson: The drive to become bigger, faster and stronger

In 2008 I watched a documentary detailing North American society’s obsession with being increasingly athletic.

The documentary was called Bigger, Stronger, Faster. A term you hear used to describe modern athletes in every sport more and more these days, especially those athletes wearing helmets and shoulder pads.

As we work our way through regional CFL combines this March and head towards the national showcase in Winnipeg, I took a look at whether the concept of Canadian football players being bigger, stronger and faster is a reality, or just a space and time filling cliche used by analysts everywhere to conveniently support whatever argument they might be making based on rhetoric and not data.

The Waggle shares its own version of CFL Power Rankings…and they couldn’t be any different. Plus TSN Analyst Duane Forde weighs in on the off-season and looks ahead to the combine and draft.

The data used covered CFL Scouting Combine-invited players from 2008 through 2017. It is important to note in the results found that regional combines began in 2013.

This opens the door to declining test scores with a wider talent pool and more ‘fringe’ body types being evaluated, which adds another layer of intrigue to the bigger, faster, stronger conversation.

Did opening the door to more evaluated athletes negatively impact one positional group more than another? Are there connections to be made between size, speed and power and if so can we see the direction CFL Scouting Combine evaluated positional groups are evolving to fit the modern adaptation of the game?

The question of whether we as a football playing nation are getting bigger is twofold. Being taller matters at the receiver and defensive back positions, as high flying ball battles increase with style of play, but being a tall offensive tackle or defensive end with no weight to block or rush superior stout opponents doesn’t accomplish much.

I Looked at the two values separately to paint an accurate picture of combine invitee evolving body composition: 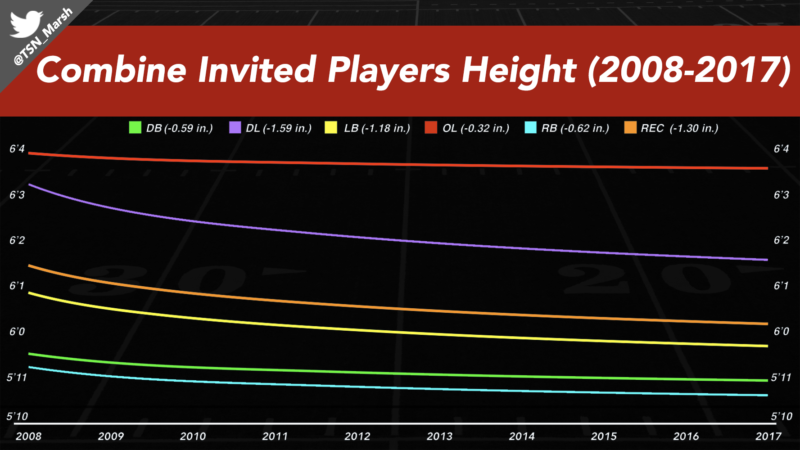 This surprised me. Take one look at the above height chart and you can clearly see each position is becoming shorter with defensive linemen and receivers losing the most height over the last decade.

But looking at the last five years since regional combines expanded invitees creates a different perspective: 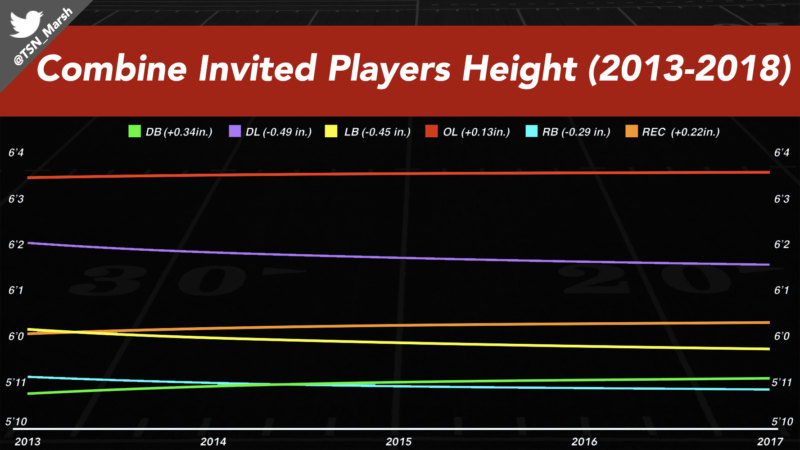 Since regional combines joined the party, there appears to be a race to find taller defensive backs and receivers. There could be plenty of explanations for this but I believe more than anything the regional combines give taller frames the chance to earn attention despite the fact they might be too slight or have taken a different path that previously would not have earned a national combine invite.

A good example of this is 2017 regional participant turned national combine invitee receiver Malcolm Carter of the Ottawa Sooners, who earned the right to be drafted by the Montreal Alouettes. Carter stood 6-foot-6 weighing 195 pounds last spring, but got a shot thanks to the regionals.

In response to bodies like Carter and UBC receiver alumni Alex Morrison (another regional combine invitee who went to nationals and got drafted by Montreal), defensive backs are increasingly being sought after for their length, with this trend of the last five years showing no signs of slowing down. 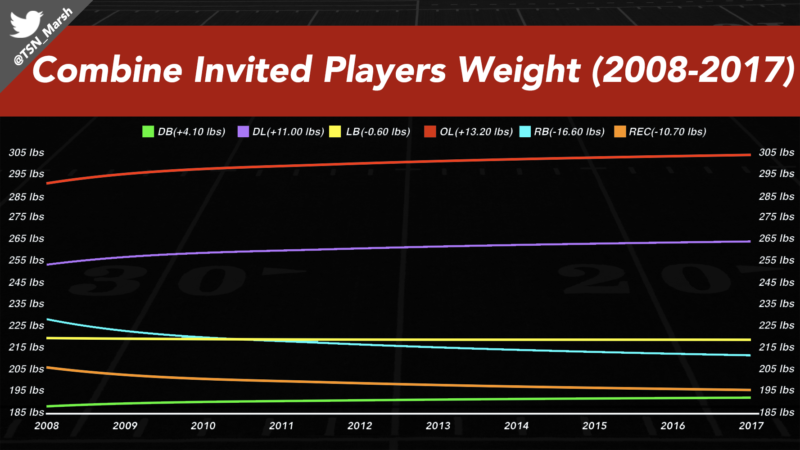 As for weight, lineman on both sides of the ball continue to bulk up while linebackers over the last five years have lightened the load more than any other position (-4.10 pounds).

Running backs are a bit confounding as the data shows a drop of nearly 17 pounds off the frame of an average CFL Combine-invited back since 2008. 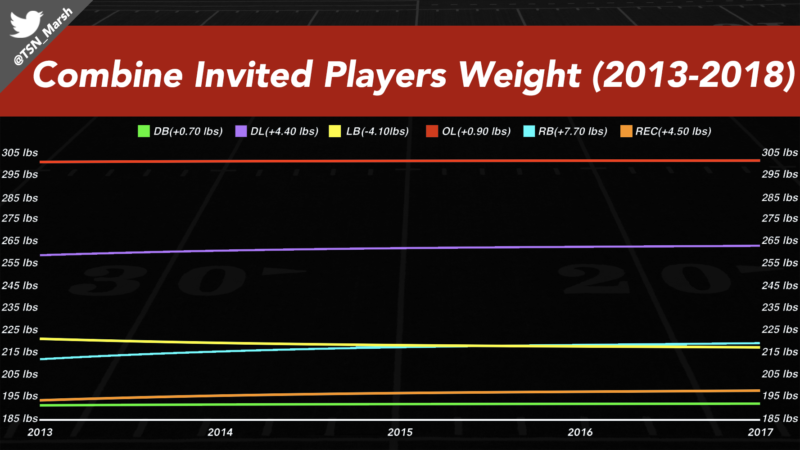 However, in the last five years, as running backs have become significantly shorter, they have also gained more weight than any other positional group on average (+7.70 pounds) followed closely by their offensive skill position partner pass catchers (+4.50 pounds).

Again, linebackers serve as the outlier here, serving as the only positional group to drop weight since regionals began in 2013. More on the possible causes of that later.

When it comes to the bench press results, linemen and defensive backs are simply not putting up the year over year numbers they did 10 years ago. Be that because of more stringent protocol on the bench to avoid cheating reps or a shift in importance away from meathead culture towards appreciating the football players’ real football skill, the numbers show those positions slowly declining since 2013 with defensive backs weakening the most (-4.40 reps). 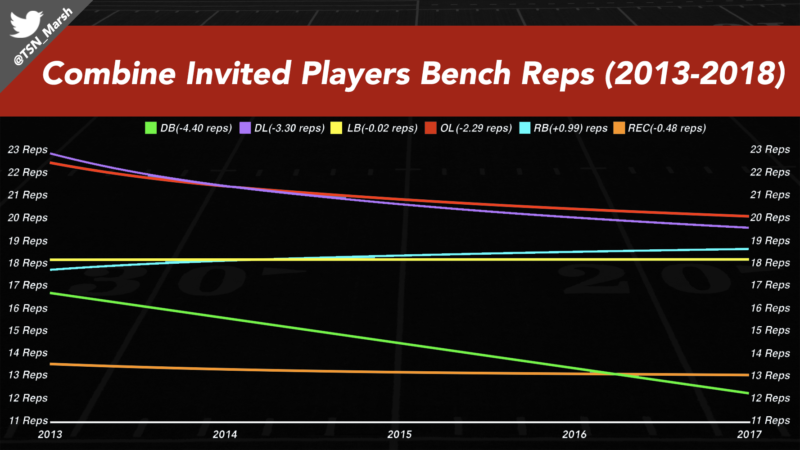 Despite dropping weight, linebackers have remained the most consistent of any positional group on the bench press while the shorter, thicker running backs described above are the only group to improve their strength over the last five years (+0.99 reps). 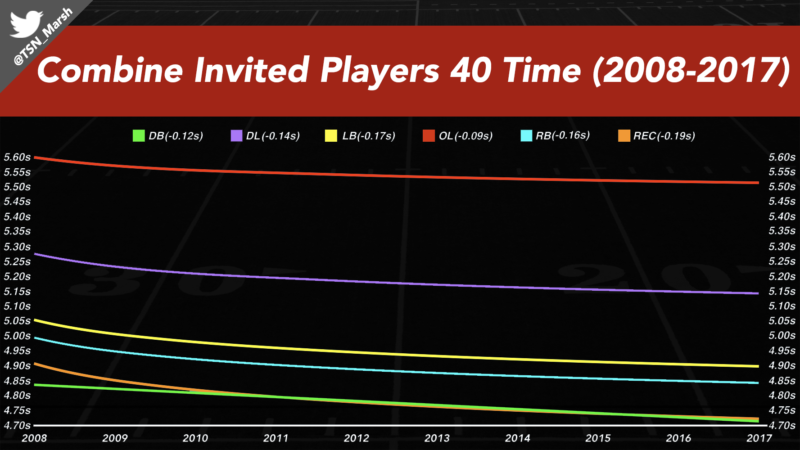 As the old saying goes, you can’t hit what you can’t catch and Canadian football prospects are running away from more people than ever before in the last 10 years. 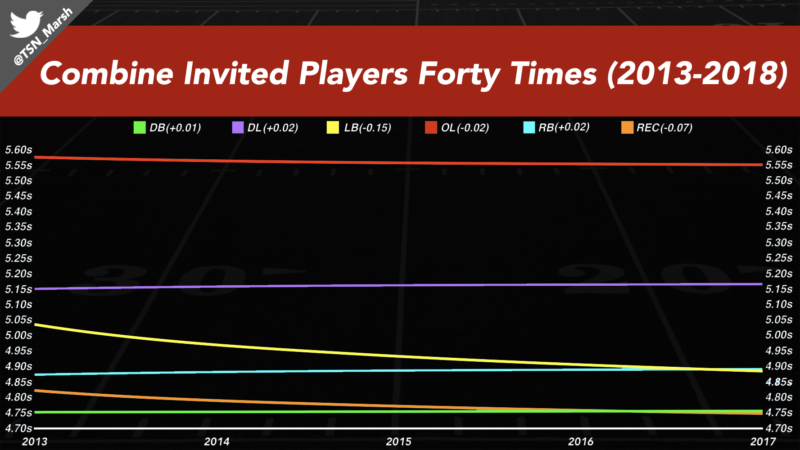 In the last five years shown above, linemen have essentially stayed status quo while two interesting offence-defence speed rankings have changed. Receivers on average are now faster than defensive backs for the first time in five years and linebackers are speedier in the 40 than running backs.

At receiver, it’s obvious the job requirements are forcing an evolution of speed, but the linebacker position is intriguing and shows a change in the way the CFL identifies young talent worth evaluating and possibly drafting.

One possible explanation for the shift of national linebacker expectations away from being a heavier, slower player to a lighter, faster player is their role on a team. Rarely do you see a national like Henoc Muamba asked to anchor the middle and stop the run. Most national linebackers are drafted for depth in case of emergency injury to a heavier *true* linebacker while being asked to play an important role on special teams.

With specials being a big part of the Canadian game, these players and the way they are evaluated seems to be changing. In 2018 a linebacker is more likely to be invited to a CFL combine for being light, fast and experienced on special teams than being a downhill, between the ankles run stuffer.

In the big picture, Canadian football’s best young players are coming in an ever-evolving mixed bag of heights and weights depending on positional group. They are not as strong by current testing standards as they used to be but are as a whole becoming much faster.

As the CFL game evolves, so too do its feeder systems and the athletes they produce. Only father time will tell if the importance of speed to burst around the big Canadian field will continue, but this year’s national combine in Winnipeg should give an indication of whether the recent trends will persist.