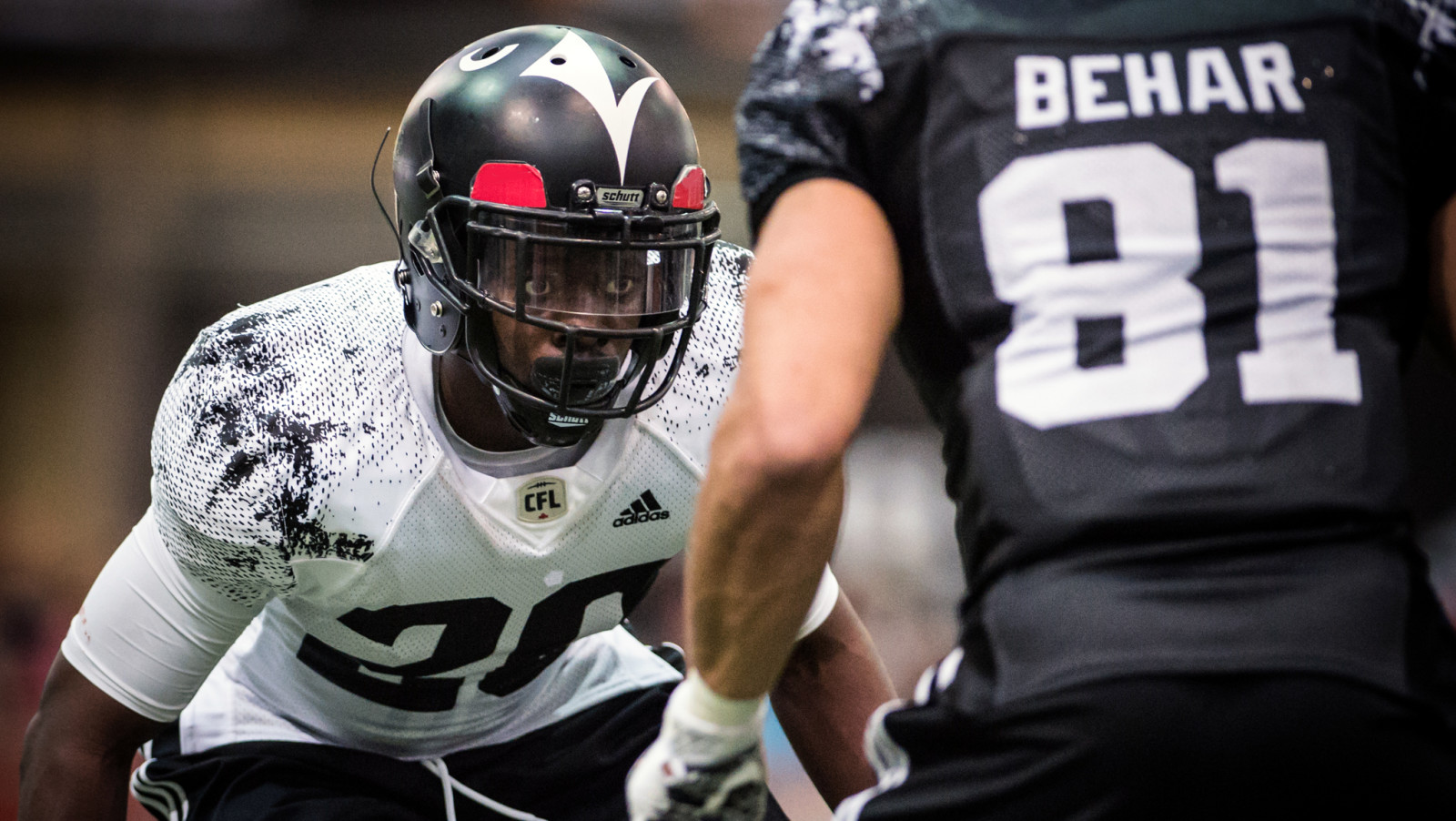 The best advice any Canadian prospect about to go through the national combine process could get is simple: put your best foot forward.

“Just watch film on the CFL, go there (to the combine), do what you do best,” said Calgary Stampeders defensive back Tunde Adeleke. “You got invited to the national combine for a reason so you should be confident.”

The CFL’s National Scouting Combine presented by adidas, which is taking place in Winnipeg during Mark’s CFL Week this year, is the last opportunity for players to prove their worth ahead of the 2018 CFL Draft. Prospects will compete in tests to showcase their athletic abilities, like the 40-yard dash, bench press and vertical and broad jump, as well as one-on-one and individual drills. Each player also goes through an interview process with any team that may be interested in drafting them, giving the coaches, scouts and general managers a better sense of who they are off the field.

“The tape’s going to give us a baseline measure of a player’s skill set and athletic ability,” said Toronto Argonauts assistant general manager Spencer Zimmerman. “The testing (at the combine) can either validate that if you feel a guy plays fast or has certain athletic traits he demonstrates on tape, usually that can correlate to the testing.” 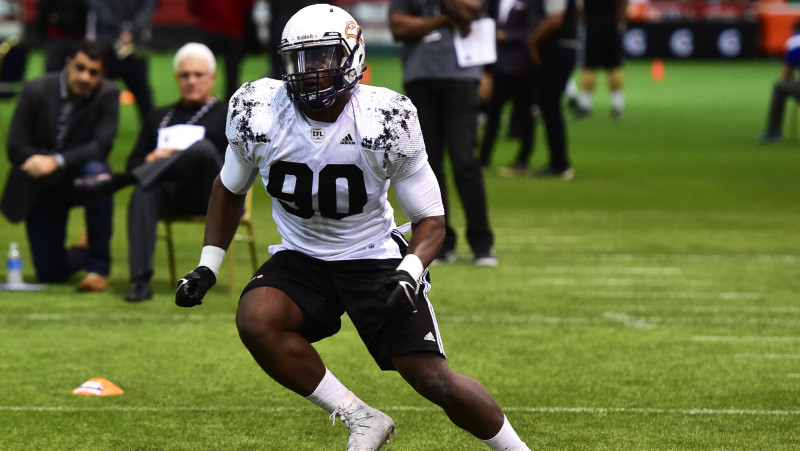 Kwaku Boateng participates in a one-on-one drill at the 2017 National Combine (Arthur Ward/CFL.ca)

Defensive end Kwaku Boateng competed at last year’s national combine and impressed in his one-on-one drills. He went on to get drafted by the Edmonton Eskimos and eventually found himself making the starting rotation on the team’s defensive line.

He also competed in all six of the testing sessions in Regina including the shuttle, 3-cone, 40-yard dash, vertical and broad jump and the bench press. The 40-yard dash showcases a prospects speed while the jumping drills show off their explosiveness and the bench press (where they bench press 225 pounds as many times as they can) puts a player’s strength on display.

Boateng started preparing and training for the combine while he was still in school at Laurier, trying to balance his football and academic aspirations at the same time.

Unique to the Canadian Football League’s combine, prospects participate in one-on-one drills where they match up and compete in a battle with other prospects. Defensive backs and receivers go head-to-head, linebackers and running backs take on each other and offensive and defensive linemen battle in the trenches.

With the list of participants that will be attending the combine released a few weeks before, prospects have the opportunity to study to ensure they’re prepared for any player they could get matched up against.

“You should do your due diligence and go over the list (of participants),” Boateng said. “Definitely look at the O-linemen, the tackles and the guards, if you play D-line. If you’re a receiver, you have to look at all of the DBs. It really comes down to looking at them and then finding their tape. Then once you find the tape you can do your homework upon that and just hope to find anything that you can beat them with.” 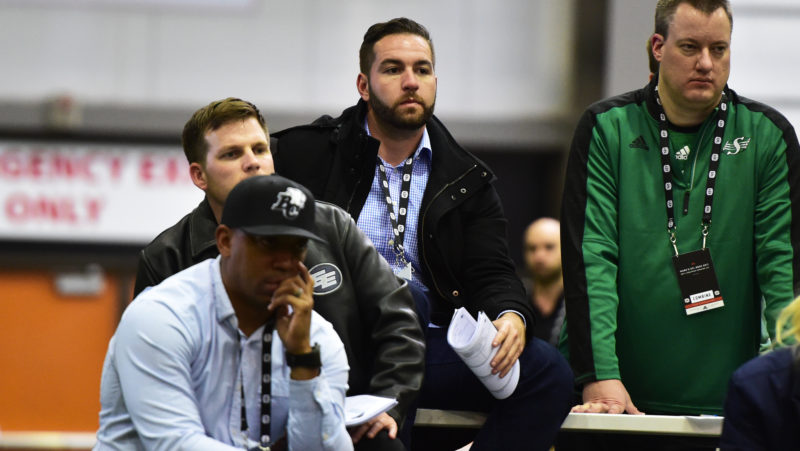 Last year, Adeleke prepared for his combine – the same combine that he notched the fastest 40-yard dash time – by asking for advice from his coaches and past players who participated. He also had the unique advantage of joining a few teammates at the national combine last year, like fellow Carleton alum Nate Behar, and had played against some of the top pass-catchers in games throughout the OUA  season.

“I had the opportunity to play against the top receivers in the draft like (Danny) Vandervoort and I played against (Nate) Behar everyday in practice,” Adeleke said. “That was lucky for me. Me and Behar were doing one-on-ones throughout the whole off-season to prepare for the draft.”

He also watched CFL film to get pointers on how man coverage was different in the professional ranks than in it was at the university level.

“I was one of the guys that went in there knowing that in the CFL you can review pass interference and grabbing something you can’t get away with in the CFL,” he said. “I worked really hard making sure that I wasn’t reaching and cheating a little bit in one-on-ones.”

While the drills and one-on-ones can give GMs and scouts a sense of who a prospect is on the field, what they can’t tell them is who they are off of it. That’s why the interview process is so important to the combine weekend.

The combine is, for some, the last chance to get noticed and scouts and general managers will be watching prospects with a close eye as they look for the next Canadian to add to their team’s roster.

“You try to make it (the combine) an uncomfortable environment for a player,” Zimmerman said. “It’s really unique, it’s a little different. (And you) see how they adapt and respond to that environment. You get a little bit of a preview, or a validation to what you see on tape, of a player’s competitiveness to a player’s mental preparation. (You see) how they interact in a competitive setting (and) in a new competitive setting.”