Rather than wait for a creative new idea with unknown results, sometimes it can be quite advantageous to tap an existing success, modify it, and then roll it out fine-tuned to a Canadian touch.

Always looking for ways to enhance football development in Canada, Ryan Janzen didn’t have to go to the crystal ball this time. After considerable review, analysis and input from others in the gridiron world, Janzen figured it was time to try out a modified 7-on-7 game for university players.

In his role as Senior Director of Football Operations for the Canadian Football League, Janzen dabbled with a number of ideas, obtained the necessary steps of approval and tested out a version, last year during CFL week in Regina, which involved a handful of schools in Western Canada.

“People always hear of the benefits of high school athletes in the United States going to football camps, always playing and improving,” said Janzen. “ So, why not tap that concept and make it appealing to our student athletes?” 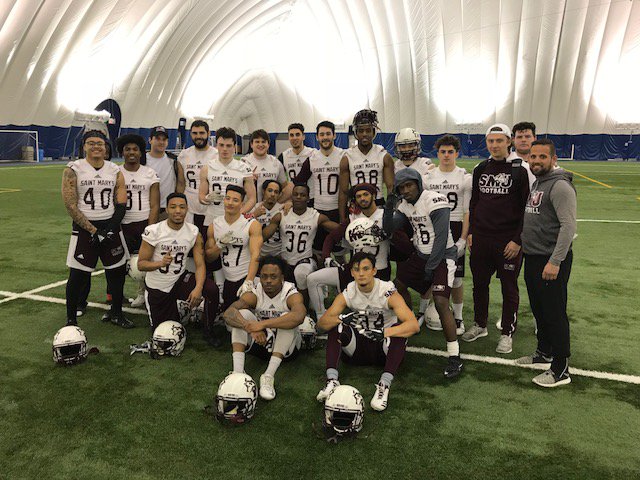 Janzen did just that to the praise of many.

“It was a huge success (in Regina), so the next step was to make it available across the country,” he said. “The coaches loved it, the players saw opportunities to learn and excel and, from our perspective, it was improvement on all fronts.”

The objective for the CFL, and open to the 27 universities that have teams, was to focus on first and second year football players – those who may have been red-shirted or didn’t see much game action because of others with more experience or graduation days not far off.

With the event held off-season, the emphasis was on more drills and reps in a competitive environment. Tack on improving working relationships with coaches.

Halifax, Toronto and Winnipeg hosted 7-on-7 tournaments in March and 14 universities tapped in on the initiative. It was one-handed touch football as quarterbacks, receivers and defensive backs staged 30-minute games with players only requiring a helmet and jersey. The CFL picked up the tab for indoor rental facilities, and universities paid for their own transportation.

“The concept was great and it brought young players together to showcase their skills – and learn from others,” said Kevin MacNeil, head coach at the University of Guelph.

“Every coach knows there are younger guys who may not get a chance to play in a game right away and so this gives us more time for evaluation, learning and it helps players who may make a mistake bounce right back with a big play.”

DeAndre Rose is finishing his first year of studies at Guelph, and the 18-year old quarterback said the CFL-sponsored 7-on-7 kept him focused on what lies ahead.

“No doubt about it, this was a confidence booster,” he said. “I am trying to win a starting job and university football is much harder than what I have played in past. For me, it’s a learning process, a chance to get better and I came away from this having seen much improvement in how I play, picked up ideas and remain focused and committed.”

“When we get down to it, it’s also about the future of football in this country. Universities are also talent pools for the pros and with this partnership, we do our part, the CFL does its and everyone comes out better.”

A.J. Tufford, assistant head coach at Saint Mary’s University, said there were players who took this very seriously as an opportunity to showcase their talent.

“The CFL deserves a great deal of credit for building the game in a safe way,” said Tufford. “Not only did the 7-on-7 give younger players a chance, at a different time of the year, but it gives evaluation, for everyone, which is critical. On every team you’ll find a player who feels he deserves more playing time and is hungry to prove it.”

That could very well hold true for 20-year old Toronto-native Matthew Romain, who finished his rookie year as a defensive back — and limited action in the Saint Mary’s line-up.

“There is always lots of attention on the guys who score points,” said Romain. “My job is to prevent that, and I learned a great deal (at the 7-on-7). I left knowing my coverage skills improved, my technique is way better and I learned a lot about leadership making me better prepared for Spring camp.”

Stephen Bryce, head coach of the University of Regina, said Western Canada might have an advantage over the rest of the country when looking at minor and high school football development.

“We have it good out here and want to keep improving all aspects of the game,” he said. “So, when the CFL came up with this event – it’s something that is great for players, coaches and the success of the game.” 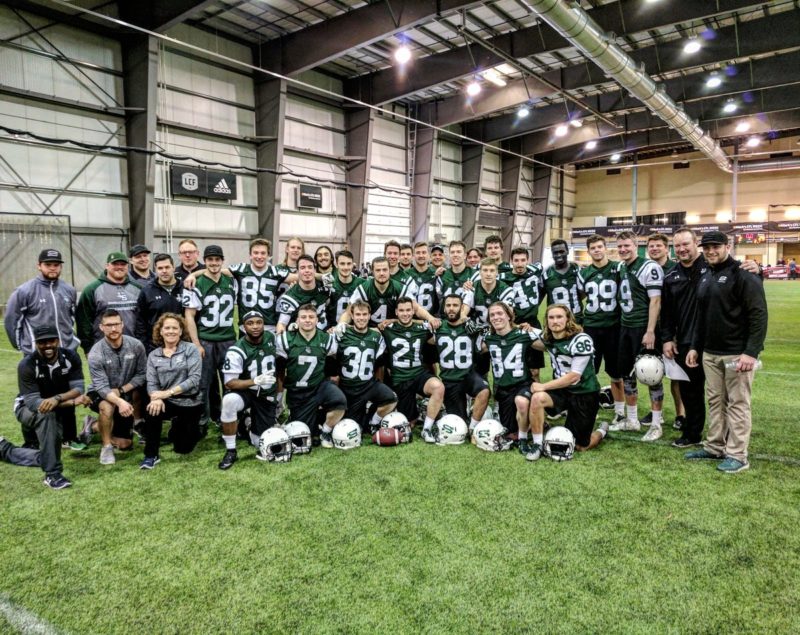 Mount Allison University’s Gaetan Richard went beyond bragging about the event and praised the CFL.

“When the CFL invests in amateur football, such as an event like 7-on-7, it is sending a clear message about doing everything it can to make a positive impact on players, coaches and building for the future.”

Darrell Adams knows all about showcasing athletes, testing their abilities, but he views the CFL initiative as more.

“When we get down to it, it’s also about the future of football in this country,” said Adams, the defensive coordinator for the University of Waterloo. “Universities are also talent pools for the pros and with this partnership, we do our part, the CFL does its and everyone comes out better.”

Janzen said the fast-paced and entertaining 7-on-7, which declared champs at each of the three locations, could develop into a National university championship in the years ahead.