James Franklin and the Instagram that changed his life 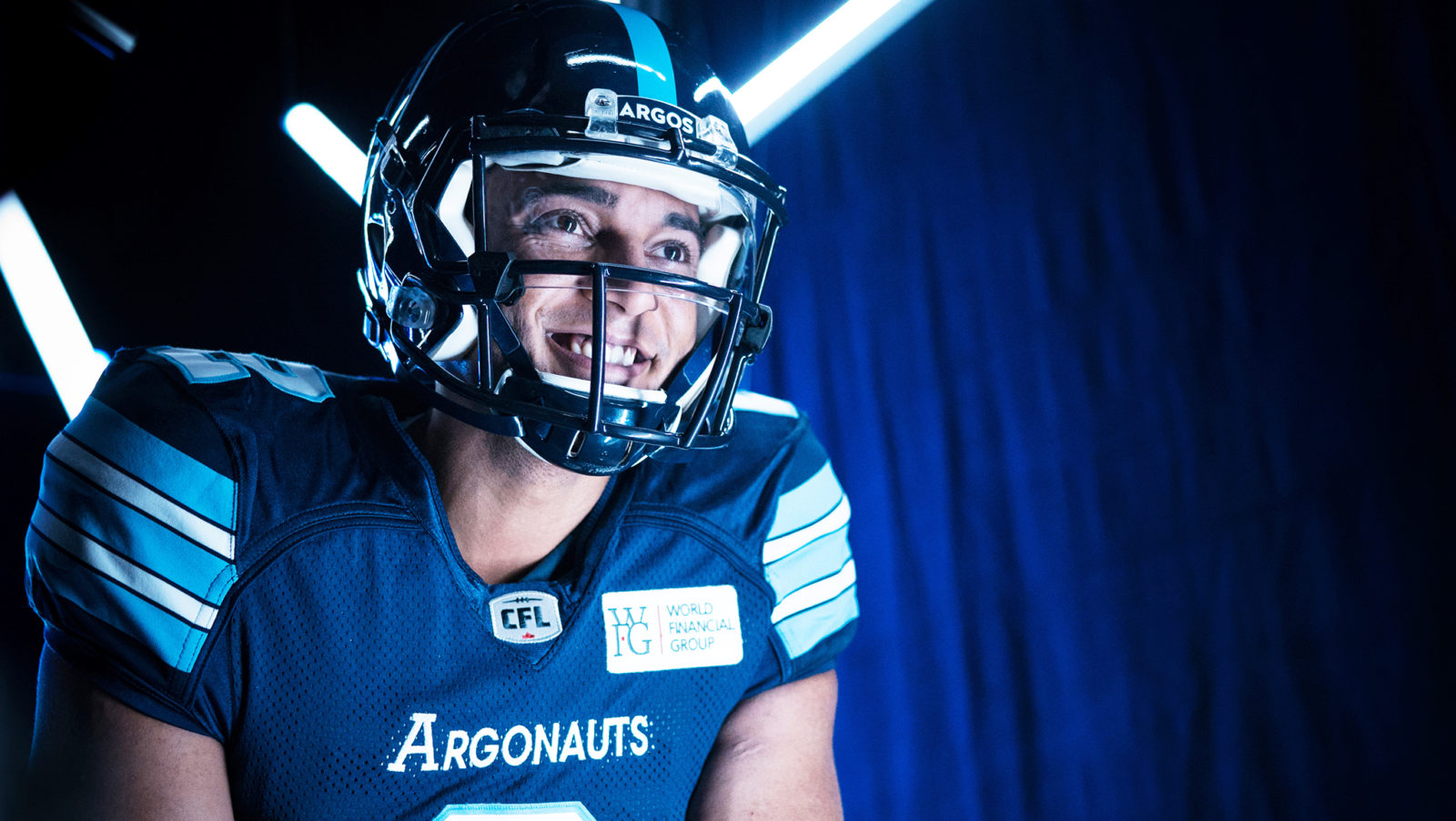 James Franklin and the Instagram that changed his life

James Franklin had arrived in San Diego for a workout with a quarterbacks coach, looked at his beautiful surroundings and like so many of us, pulled his phone out of his pocket.

It was May, 2013 and Franklin was still playing at the University of Missouri. A starting QB at a major NCAA program, his social media profile was blossoming. On Twitter and Instagram, he adheres to a strict follow-for-follow policy. His timelines are a smorgasbord of randomness, thousands of strangers lives and thoughts popping up in front of him, every time he refreshes an app.

He looked at his Instagram feed and he couldn’t believe what he saw.

“I opened it up and the first picture that popped up was Kaylee’s,” Franklin, the Toronto Argonauts QB said on Thursday at Mark’s CFL Week.

Suddenly, following thousands of strangers was a blessing and a curse. He was intrigued by the pretty girl he saw, but he had no idea who she was.

He’d comment, he figured. Not a big deal. But then everything became a big deal. He’d type a word or two, maybe a sentence and think 10 steps ahead, second guess himself and start hitting the backspace key.

“An hour and a half goes by and I think, ‘I’m just going to send it.’ So I sent it, and I was nervous, I start sweating,” he said. “I’m refreshing the page every second because I’m like, ‘OK, most people our age, they’re looking at their phone they get alerts, so she has to have seen it. About two hours go by and she finally replies. We start to go back and forth.”

His intense self-doubt in this situation may have only been exceeded by his interest in Kaylee. Maybe. He wanted to know more about her and it couldn’t happen fast enough for him. For her? 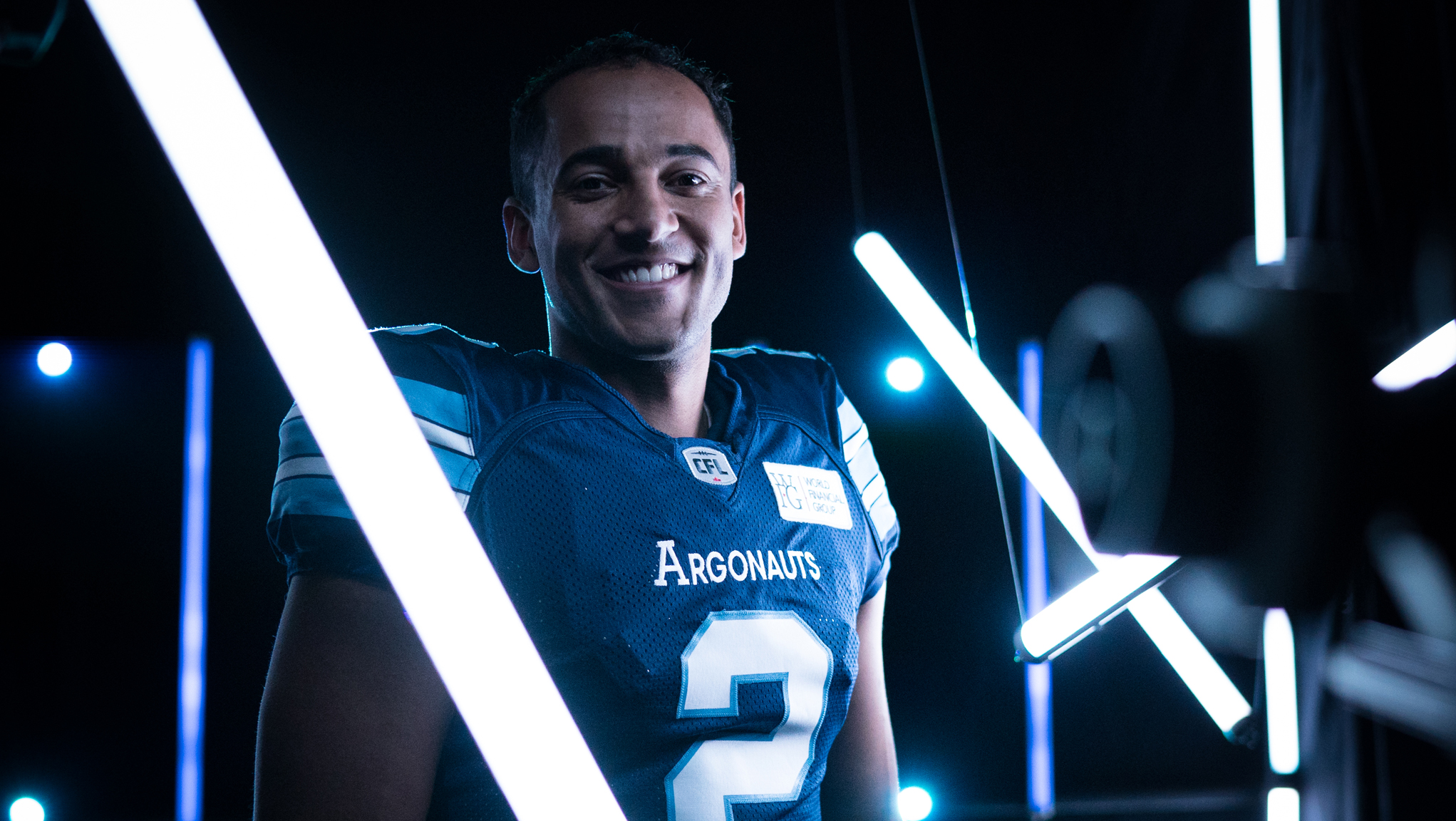 Newcomer to the Argos, QB James Franklin, poses for the TSN cameras as a part of Mark’s CFL Week in Winnipeg on Friday (Johany Jutras/CFL.ca).

“She kept trying to end the conversation,” he said.

“That conversation is still there on Instagram,” Franklin said.

For most people, the abrupt, seemingly obligatory polite responses would have been perceived as a hint and the end of the conversation. But James Franklin isn’t most people.

“So it took me four hours to find her on Twitter, because there’s a lot of Kaylee Thompsons and her handle wasn’t the same as it was on Instagram,” Franklin said.

“I’m looking at different pictures. ‘That’s not her, I don’t think that’s her.’ Finally I found her and I sent her a message.”

After a relatively deep Internet creep, Franklin had reached the precipice of block-or-engage.

The DMs evolved into texts, but Franklin was still unsure of the situation.

“I’m sending like, novels, unleashing my poor little heart and she just replies back with these one-liners like, ‘That’s cool,’ or ‘OK’, and I’m thinking there’s no way,” he said.

“I just spent three hours typing this text out and she’s just replying, ‘OK that’s great.’ Sometimes she wouldn’t even reply. I’m thinking there’s no way she’s not getting my text because I get like thousands of texts after football games saying congrats. There’s no way she gets more than I do. I was so baffled at that.”

They finally met at a mutual friend’s graduation party and he couldn’t get out of his own way. There was a lookaway and a fake I-just-saw-you, a side hug and for some reason he told her he thought her mom was in the kitchen of the house.

After a pep-talk in a bathroom mirror, he got it together enough to ask her out the next day. They went to a restaurant but Franklin couldn’t take the menu down from his face, covering him just up to his eye level.

“I was super nervous,” he said. “I thought I was doing so great and she said after that it was probably the worst date she’s ever been on. She’ll tell you that today, too.”

Franklin finally got out of his own way and they connected. She’d heard his father Willie, a minister in Texas, speak before. That put them on the same page as Christians, which was a big thing for both of them. They talked about what they wanted in life, what they’d want from a spouse, in a marriage, from a family.

“A year and a day later we got married,” Franklin said.

Kaylee and James welcomed their first daughter, Adelynn Rae Franklin, into the world on March 4.

The needle-in-a-haystack way they met is one thing, but Franklin, a minister’s son, has been very open about the squeaky-clean life he lives. If you’re a high profile athlete that follows everyone that follows you, things can get dicey. Franklin’s all too aware of that.

“It used to be you’d explore stuff based off of what people you followed, not off of what they liked,” Franklin said of Instagram’s explore option. “I look at my explore and I’m like ‘WHAT IS THIS?’ It’s not the best place to explore.”

Somehow for Franklin, it worked out.