Big names come through on Day 2 at the combine

Big names come through on Day 2 at the combine

WINNIPEG — After showing up big on Saturday, McMaster receiver Daniel Petermann picked up where he left off at the CFL Scouting Combine presented by adidas on Sunday.

Central Michigan’s Mark Chapman also had an impressive showing, as did Wilfrid Laurier’s Godfrey Onyeka and Calgary’s Rashaun Simonise as some of the combine’s biggest names took centre stage in Winnipeg and delivered as advertised. 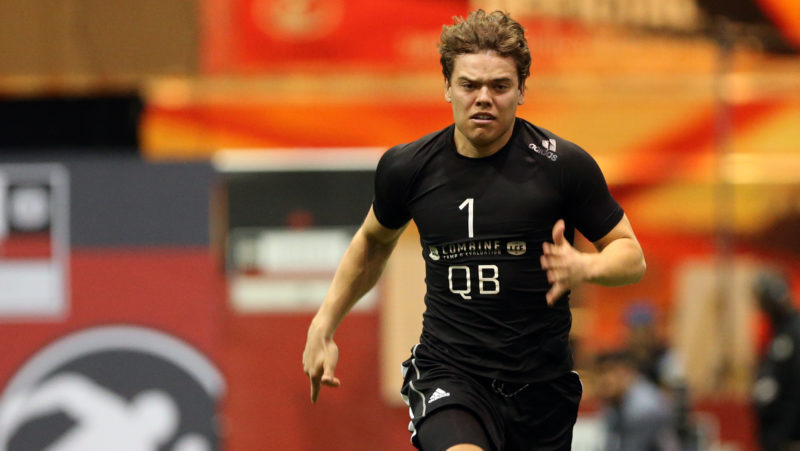 The second day of testing saw players take part in the broad and vertical jumps at the University of Winnipeg Sunday morning, before strapping on the pads for positional drills and one-on-ones in the afternoon.

Petermann, already the combine’s fastest man after taking the top 40-yard dash, also jumped the highest with a 39-inch vertical (tied for No. 1) and placed in the top-five in the broad jump (10’4.25″), making him one of the top testers on the weekend’s roster.

“I was looking for 37, which is what I hit at the regional,” said Kozachuk. “I had a pretty good broad so I knew it was going to be a pretty good day with the vert.”

In the broad jump, Chapman and Dubois showed their explosiveness with the top two leaps of the day with distances of 10’7.25″ and 10’7.00″ respectively. Simonise placed third (10’5.75″) while regional combine invite Justin Buren had the fourth best leap of 10’4.50″.

After testing explosiveness with the vertical and distance jumps, it was finally time for the country’s top draft-eligible prospects to strap on the pads, starting with the offensive linemen.

Dakoda Shepley built on his already-impressive body of work at the combine with a strong showing in one-on-ones, while all eyes were on projected high draft picks Mark Kote (offensive lineman out of Alberta) and Kene Onyeka (defensive end out of Carleton).

Onyeka came into the combine hoping to show teams he’s serious about his professional football aspirations.

“I feel like going into this a lot of the questions were, because of the whole engineering thing, whether I was serious — whether I really want to play football,” he said. “I hope that the way I played, the way I carried myself — even though my personality is a little nonchalant — I just hope coaches can see past that and understand that I care.”

After the linemen butted heads, it was finally time for fans and scouts in attendance to get a glimpse of Canadian quarterbacks Noah Picton and Christian Strong. Picton’s shorter stature has been well-documented — the Regina Rams pivot stands slightly below 5-foot-9 — but the 2016 Hec Crighton winner looked sharp in his footwork and release while throwing to running backs and receivers.

“Noah Picton deserves to get an opportunity regardless of his stature,” said CFL.ca’s Marshall Ferguson. “His quickness at the quarterback position is unlike everything we’ve seen in the last five-plus years for Canadian quarterbacks. His ball placement is always receiver-friendly and he carries himself like somebody who deserves an opportunity, regardless of whether or not he gets drafted.”

In a homecoming of sorts, Western running back Alex Taylor put on a strong showing while testing both as a running back and receiver, getting some work in one-on-ones against defensive backs.

Ottawa defensive back Jackson Bennett also showed his versatility, testing with the linebackers before standing his own against some of the combine’s top pass-catchers.

While speedy receivers Chapman and Petermann had separation often throughout the afternoon, one heavyweight matchup the scouts called for often was between Godfrey Onyeka and Simonise.

“I think it went well,” said Chapman. “It took me a couple of reps to get used to the movement of the waggle, that’s new to me. But it was a lot of fun.

“Explosive, quick, perfect fit for a CFL offence as a speed guy,” said Ferguson. “He flashed on film and flashed on the field in Winnipeg the same way.”

Simonise, meanwhile, has been out of football after having his draft year deferred, but the highly-touted prospect looked polished in the one-on-one spotlight, showing a smooth stride, good separation and an impressive catch radius. After failing to turn heads in the testing portion of the combine, Simonise showed better in pads.

“I’m feeling good. It definitely went a lot better than yesterday so I’m happy,” said Simonise. “It was good to get on the field and run routes with the guys and connect with the quarterbacks.”

“Simonise is not a traditionally-polished route runner but his athletic ability is going to get him drafted,” said Ferguson. “I was surprised he didn’t test better, but put back into a structured environment on a CFL team he’s only going to improve.”

Onyeka, on the other hand, dominated many of the matchups he was involved in, using his physicality to his advantage on the way to a pair of interceptions.

“Godfrey has every tool to be an impact player quickly in the Canadian Football League. His determination on special teams and body development over the next year will determine what type of player he becomes at the start of his career.”

With the combine in the books, the waiting game begins for draft-eligible prospects. The 2018 CFL Draft will unfold on May 3.