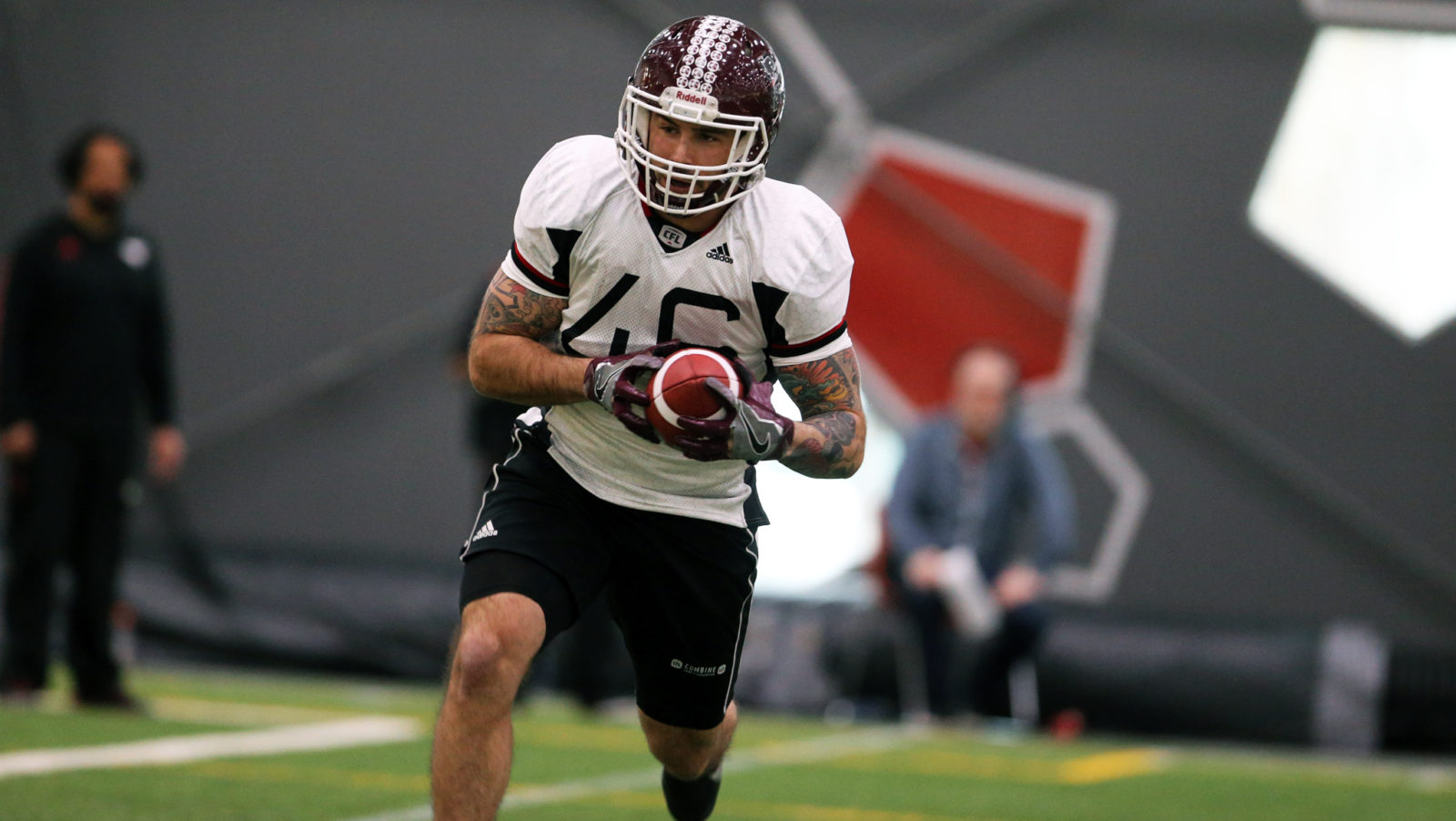 The CFL Scouting Combine presented by adidas painted part of the prospect picture last month in Winnipeg. Who’s trending up and who’s trending down?

Mackie should have been a highly rated prospect the entire process but as sometimes happens with a multi-tooled player, his value was not truly appreciated until late into the winter. Mackie adds long snapping experience along with being the best blocking offensive skill position player in the draft. His advanced understanding of angles, timing and blocking leverage will make him a sure-fire, high-round pick.

Stone was a bit of an unknown to the many U SPORTS fans who follow the draft in their winter football starvation. He arrived at the combine with good burst and the ability to handle himself in special teams drills, which was the most important part of his evaluation considering he out worked other backs such as Alex Taylor and Atlee Simon in the games most important discipline as a potential rookie. 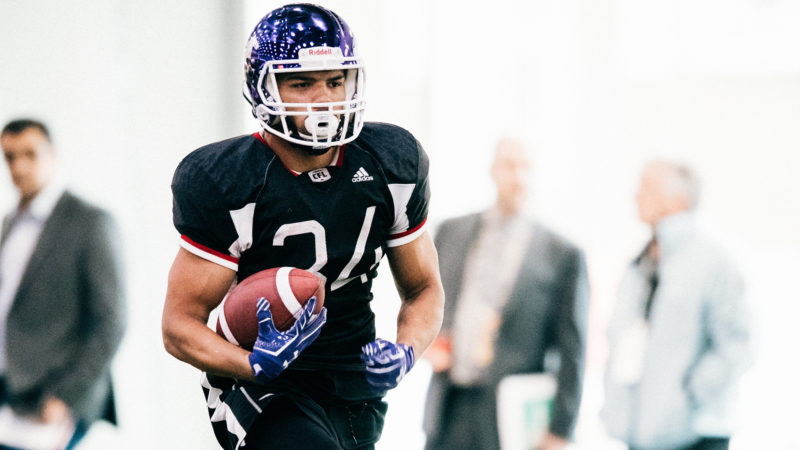 Taylor gained the praise of the hometown Winnipeg crowd with his quick cuts and pass catching ability but that’s really not what decision makers value. In order to open eyes as a running back these days and raise your draft stock, the special teams drills and testing numbers play a significant role.

Taylor might still get drafted and his game film shows awesome burst and playmaking which should give him every chance to crack a roster but the combine setting was not his best friend.

I had high hopes for the St.FX work horse after seeing him carry the rock with power and grace for the AUS X-Men over the last couple of years but his numbers and body composition at the Eastern Regional Combine didn’t show the profile of a player likely to get an easy opportunity.

Green is a big bodied blocking H-back who tested relatively well and appears ready to contribute in whatever way he is asked to. The Alberta native worked his way to a national combine and showed that work ethic in every drill on display for scouts.

Similar to St.FX’s Socholotiuk, I have always respected and admired Vieira’s game while competing in the OUA for the Ottawa Gee-Gees. Vieira arrived ready to work at the Eastern Regional Scouting Combine. He ran well and despite being a bit undersized showed a combination of pass catching, dynamic ball carrying ability and special teams positional understanding.

Houle is a former McGill quarterback turned offensive lineman and running back. At the very least, he understands every level of offensive football but at some point this all-time tweener will have to be good enough to take someone else roster spot.

Teitz came to the national combine as a quiet yet productive linebacker for the Calgary Dinos defence which consistently produces CFL ready players. He left Winnipeg as one of the marquee names available at the position. Size, speed, work ethic, game tape and special teams functionality. Teitz has it all. 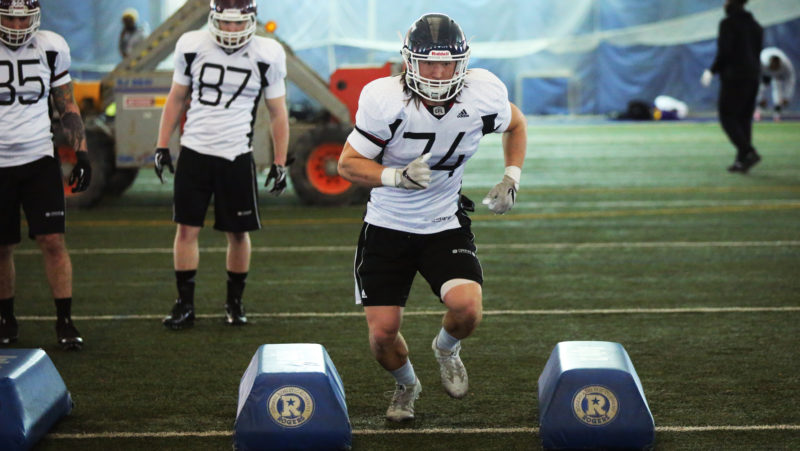 Kozachuk advanced from the Ontario Regional Scouting Combine to earn a national combine invite through a fast 40-yard dash time and good special teams drills. When I went back to some of his game film it’s easy to see that the Varsity Blues were made better in a multitude of ways for having Kozachuk on their roster.

Will a CFL team see that same potential despite being slightly undersized for a traditional linebacker?

For all the noise names like Teitz and Kozachuk created it seemed like the combine buzz around Nelkas Kwemo got quieter and quieter.

Don’t get it twisted, Kwemo has a freaky frame and unique skill set that should see him drafted and given every chance to make an impact in the CFL for years to come, but placed side-by-side with more refined linebackers at the combine there were some obvious deficiencies.

Similar to St. FX running back Jordan Socholotiuk, I was cheering for another AUS regular season standout to prove their worth and create some hype but Herbst couldn’t make that happen. The AUS leading tackler is diminutive in stature and didn’t run all that well at the Eastern Regional Combine.

What likely sealed his lack of a national combine invite was the inability to function in pass coverage at a basic level against OUA and RSEQ running backs used to route running. Coverage skills are something Herbst didn’t have much of a chance to hone against AUS opponents while in the box racking up tackle after tackle against opponents ground game.

Poulin was the intimidating heart of the Mustangs Vanier Cup champion defence in 2017 and did nothing to disprove his ability to make a CFL roster while at the national combine. He looks the part and I can’t wait to see who agrees come the draft in May.

One of the smartest players on and off the field in this draft, Mezzalira can be a little handsy in pass coverage but that’s not where he will make his CFL money. The physicality of a middle linebacker and athleticism of a weak side linebacker, plus special teams experience at McMaster should make Mezzalira a higher rated prospect but for now he flows somewhere lower on the radar than some national combine invited linebackers.

Harrington fell victim to the heightened expectations of an NCAA helmet at the CFL combine. While it’s important to scout the player and not the helmet anyone who arrives at a CFL combine with one has a target on their back in one-on-ones from U SPORTS players looking to make a splash and Harrington had some tough matchups both in pass rushing and special teams drills at the national combine.

His stock didn’t fall as much as it fell into question. Now we wait and see whose confidence remains unwavering in his ability come draft night.