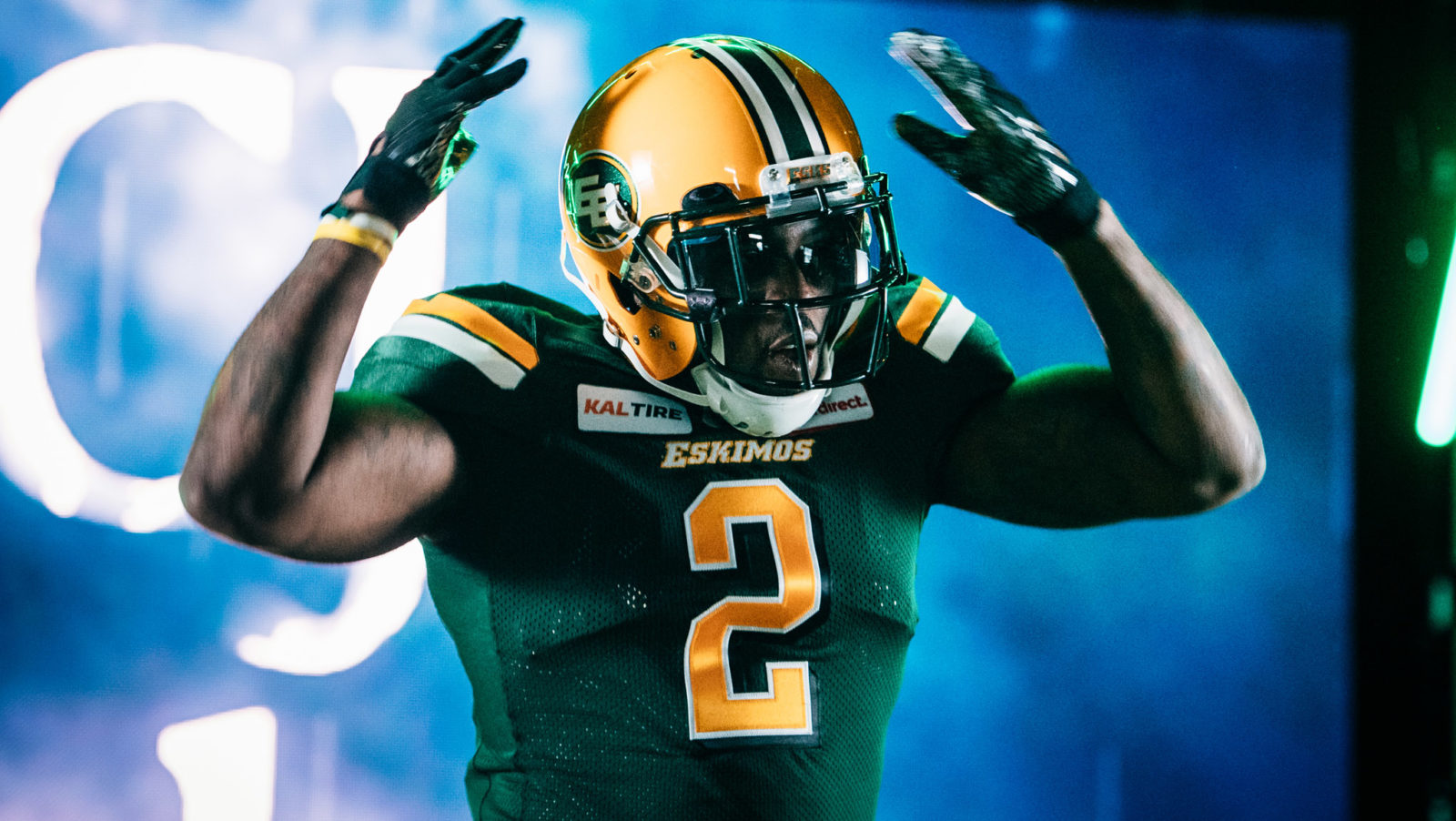 C.J. Gable has had Week 2 circled on his calendar since the 2018 season schedule was released.

It is, after all, the first time he gets to suit up against his old team, the Hamilton Tiger-Cats, since he was traded last October.

“Week 2,” he said, shaking his head as he glanced over at his former teammate Simoni Lawrence who was sitting beside him during media day at Mark’s CFL Week last month.

“I’m not even going to talk about it. I have a lot of anger in that game right now. It’s going to be a good game.”

Coming off the best contest of his 2017 campaign – a 157-yard, two-touchdown performance in the Tiger-Cats loss to the Toronto Argonauts in Week 15 – the 30-year-old was sent to Edmonton for a pair of players from the Esks’ negotiation list. 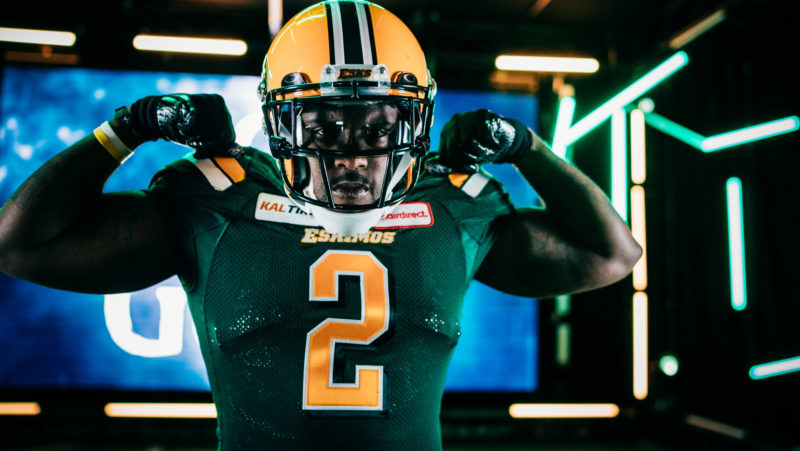 When the news broke that he was shedding his stripes and heading west, he was confused. How could the only team he had played for in the CFL not want him anymore?

“I didn’t understand why it happened and why would they want to trade me,” he admitted. “That’s what still bothers me. Maybe they didn’t want to pay me next year or they thought that (Alex) Green was better than me. I just didn’t know why they came to that decision.”

After the initial shock had passed, the Sylmar, Calif. native found himself in a pretty ideal situation.

“I was excited (to go to Edmonton) but I’ve been with that team for five years,” he said. “In the middle of the season (I got traded)? Almost the end? Why wouldn’t they have just left me? When I got there (Edmonton) and they started using me, then I liked everything I was doing.

“I felt like they were using all of my abilities so then I wasn’t really that mad. I was just like, ‘okay, I see where they’re going. I can do this. They’re using me. They’re not just only wanting me to block. I can run the ball again.’ (I was getting) 20 carries a game so I was kind of cool with it. (And then I thought) maybe I can see myself being here next year.”

The Eskimos were looking for a starting running back as the end of the 2017 season was drawing near – John White, Travon Van and LaDarius Perkins were all lost to injuries at some point during the year – which meant that Gable was set to step in right away.

Getting traded to a new team means learning a brand new playbook and for some players, it could take some time to learn his new team’s various schemes and play calls.

For Gable? It didn’t take any at all.

“C.J. shows up and I’ve heard all these things about how good he is in the pass protection but still in the back of my mind I’m like, ‘this man has only been on our team for five days,’” quarterback Mike Reilly said of his running back. “Physically, I know he’s capable of doing it but mentally there’s no way he’s going to be prepared to learn all of these different things. What struck me as the most amazing thing was that he was ready to go from day one.

“We run the no huddle so I’m communicating to the offensive line and to the running back what their job is and I was like, ‘okay, at least I’ll be able to tell C.J. three or four times what he has to do’ but it never came to that. I would tell him one time what the play was and he was rock solid. He never looked at me with the deer in the headlights look. Sometimes you get guys that look at you like you know they don’t know what they’re doing. Never once did I have that with C.J. He knew what his job was and he did it incredibly well.” 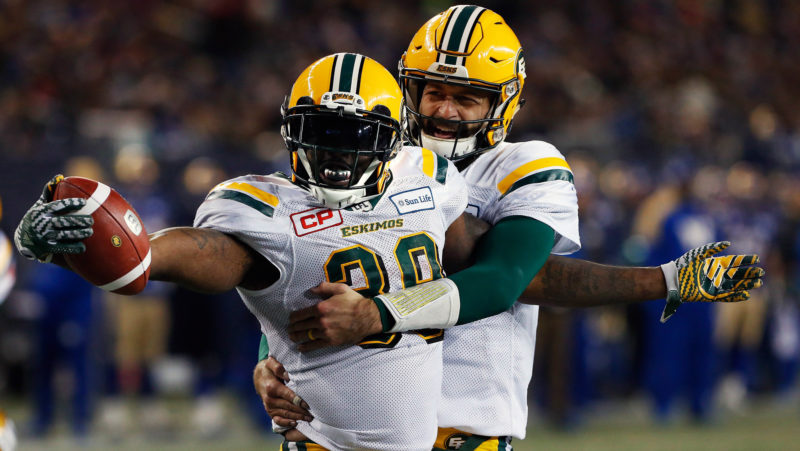 In that first game with the Green and Gold, Gable tallied 111 yards and one touchdown on 22 carries while also catching a nine-yard major score against the Montreal Alouettes. By season’s end, Gable had accumulated 994 rushing yards – 528 of those yards coming after he joined the Eskimos in the final six games of the regular season.

Gable signed a two-year deal with Edmonton in January and with the confidence of 2017’s Most Outstanding Player, he has solidified the starting role in the Eskimos’ backfield.

“He knows what he’s capable of,” Reilly said of Gable’s quiet confidence. “He knows he’s going to go out there and do a great job. He doesn’t really have to talk about it because he knows he’s just going to talk with his play on the field. If you ask him about it, he’ll tell you straight up that, ‘yeah, I’m doing to do this and I’m going to do it very well.’ But he’s not going to try and make headlines for himself. He’s going to let his play do the talking.”

Despite his usual modest demeanour, Gable is looking to make headlines for himself this time around, setting lofty goals heading into the 2018 season.

He wants to be the first running back in Canadian Football League history to tally 1,000 rushing and receiving yards (Winnipeg’s Andrew Harris was close to hitting this milestone last season). He also wants to get more touchdowns than his quarterback, who typically draws the QB sneak instead of handing off to his tailback, especially in that first game against the Tiger-Cats.

Big goals, but with the Eskimos, he feels like he’ll be able to achieve them.