TORONTO — Julien Laurent says he wants to be the type of player opponents have to game plan around.

That kind of ability could propel the 6-foot-4, 295-pound defensive tackle to first-round status in the upcoming 2018 CFL Draft, because Laurent is the type of player in the middle of a D-line you just can’t miss.

The draft’s top-ranked defensive lineman, ranked eighth in the third and final CFL Scouting Bureau ranking, has made a habit of disrupting opposing coordinators’ game plans — and can’t wait to continue doing so at the next level.

“As soon as I played my first season, professional football was everything to me,” said Laurent. “It’s always been the goal. It didn’t even matter as far as NFL, CFL, Europe — anything that concluded with me playing pro was always the goal.”

RELATED:
» Could the Als trade first overall?
» Chapman headlines most pro-ready prospects
» The latest on the CFL Draft 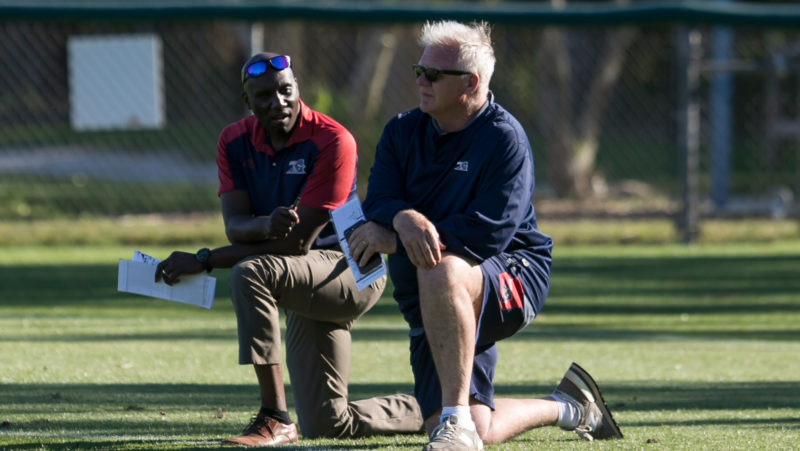 Laurent compares himself to current Philadelphia Eagles defensive tackle Haloti Ngata, one of the NFL’s most dominant interior linemen for the last 13 years. With the impact Laurent made on Georgia State’s defensive line last season, the Toronto native is living up to the billing.

Last year Laurent anchored a defensive front that held three teams under 100 rushing yards, becoming the last FBS team in the country to allow a 100-yard rusher 10 games into the season. With Laurent in the middle of the D-line, the Panthers set a school record for the fewest points per game allowed (24.75), fewest rushing yards per game (136.4) and most sacks (24). Along the way, he tied for the team lead with 6.5 tackles per loss, along with 24 tackles and a pass breakup.

In his latest mock draft following the CFL Combine, Marshall Ferguson had Laurent going sixth overall to the Edmonton Eskimos.

“Laurent is a bit taller than your typical NFL-style nose tackle but at 6-foot-4, he uses his athleticism and work ethic to grind towards the quarterback or ball carrier,” said Ferguson. “As a constant staple of the Georgia State defensive line over the last four years, Laurent has solidified numerous game tapes full of sound positioning, gap responsibility and a distance ability to knock down intended passes. Laurent can hold a gap well and has learned how to use his size to create advantages.”

“The first hit you get in the game, everything just turns on after that. Go through the warmup, go through everything. That first hit, then it’s just going to be game on.”

Most CFL teams opt to deploy one Canadian in the middle of their D-line, with Ted Laurent, Cleyon Laing, Jabar Westerman and Zack Evans all providing significant value as highly-talented Canadians at the position. Julien Laurent says his compete level can help him carve out a solid career as a CFL defensive lineman.

“I’ve always been a very competitive person,” said Laurent. “Sometimes I don’t show that — I keep myself pretty level-headed — but if we’re losing or something like that, I hate it. It bothers me. I lose sleep over it. I’m a big competitor.”

He’s also never been one to shy away from the physical side of the game. Laurent says he’s already envisioned making that first hit after putting on a CFL uniform.

“Any football game I’ve ever played, no matter what level, I always start off the game nervous,” he said. “The first hit you get in the game, everything just turns on after that. Go through the warmup, go through everything. That first hit, then it’s just going to be game on.”

Laurent will find out his new football home on May 3 at the 2018 CFL Draft, with coverage starting at 8 p.m. ET on TSN.