O’Leary: Manziel in it ‘for the long haul’ with Ticats

O’Leary: Manziel in it ‘for the long haul’ with Ticats

Johnny Manziel’s first test in the CFL came a full 24 hours before he was in pads and on the field with the Hamilton Tiger-Cats.

You might have thought it would come in the form of a 250-pound defensive lineman launching himself at him, or an eagle-eyed defensive back snagging an errantly-thrown pass. Instead, the test came from his head coach, June Jones.

“He’s not starting anytime right now,” Jones said, about 90 minutes after their partnership had been made official.

“But let me tell you something right now. (Manziel has) got his work ahead of him to beat out Jeremiah.”

MORE ON MANZIEL
» Johnny 3-Down Football: Tracing the Manziel timeline since 2017
» Quote Board: Manziel saying all the right things early
» Rewind: O’Leary says Manziel signing would be lightning rod of attention for he and ‘Cats
» On Demand: Watch the entire Manziel presser again
» O’Leary: Why the Manziel signing will create ripple effect across the CFL

The 25-year-old sat to Jones’ right and didn’t flinch. The highest profile signing the CFL has seen in 12 years (shoutout to Ricky Williams!), Manziel arrives in Hamilton with his pride swallowed, his eyes open and as he said, a self-awareness of his situation here.

“Jeremiah’s our starter,” Jones said early on in Saturday’s press conference, clearly laying out the path that Manziel will have to take to get back into professional football.

“That’s not what I’m coming here for,” he said.

“I know that there is going to be a learning curve, that I am going to have to take some time for myself and temper my expectations. I’m not trying to come out to make outlandish goals. I have very realistic goals to come in, learn the offence, learn the game and hopefully my talent and making some (progress), I feel like what I can do on the football field will show.

“Like coach Jones said, whoever gives this team the best opportunity to win, whatever case that might be, whatever day that might be throughout the season I think will come to fruition.”

A day before training camp opens, Manziel’s signing could have gone one of two ways. His arrival could have been a torpedo into the water, disrupting everything before a player sets foot on the field. Instead, he sounded like any other CFL rookie QB that you’d talk to the day before camp opens. He believes in his abilities but understands he’s in a new league and that it will take time to learn how to play in Canada. If he’s a backup in Year 1 of his two-year deal, so be it.

“I met a couple guys in the locker room so far and I’m excited to be one of the guys,” Manziel said.

“This isn’t just a pit stop for me. I’m not coming here to get what I need to go back down to the NFL. I’ve signed into this for the long haul. For two years. I’m here to make the most of it.” 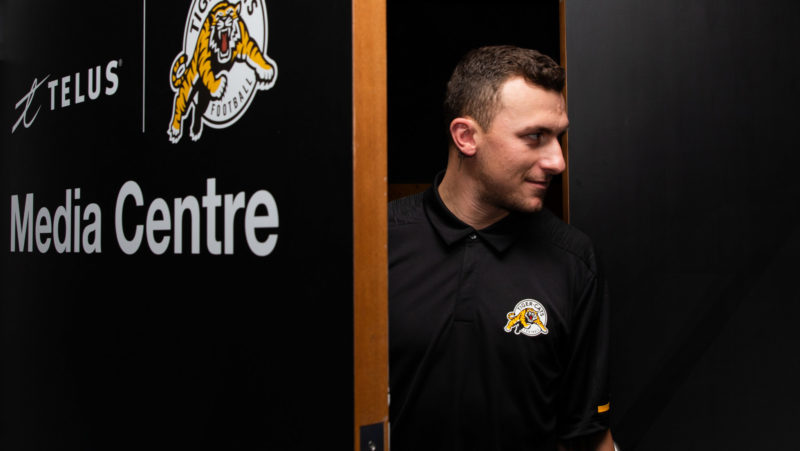 Johnny Manziel seemed to say all the right things at his introductory press conference (Kevin Sousa/CFL.ca)

It’s been almost 2.5 years since Manziel played his last NFL game. Between the NFL and CFL, he’s lived a lifetime. There was his release from the Cleveland Browns. There were videos of him partying. He lost his agent, his marketing firm and sponsorships.

He was indicted on a domestic violence charge involving an ex-girlfriend (to that end, the CFL had Manziel undergo a process that included an assessment by an independent expert on domestic violence, a review by legal counsel and an in-person discussion with commissioner Randy Ambrosie; Manziel had to meet confidential conditions laid out by the league and will have to continue to meet those through this season). The charge was settled in Dec. 2016 on a plea agreement that saw him undergo counselling and had his conduct monitored by prosecutors for up to a year.

Early this year, he openly discussed with American media about suffering from bipolar disorder, depression and self-medicating issues.

He enters into the CFL, he said, in a much better headspace than he did with the NFL four years ago.

“I remember the day I got drafted,” Manziel said. “I was probably a little hesitant on the team I was going to and where I was going. It was a big jump and a lot of uncertainty from the system that I ran in college to what the NFL system was going to be when I walked into the building the first day.

“My situation here, I’ve completely accepted this team and where I’m at that this is my best opportunity to get a chance to go out on the field and be a part of a team.

“I’ve done a lot of things in my personal life. I’ve worked extremely hard in my physical and football aspect of my life. And I feel like I’m in a great place. I feel like I’m in the best place that I’ve been mentally and physically in my life.”

Johnny Manziel on his goals with the Ticats

“Now it’s just consistency from me, continuing to do the things I’m doing to ensure that I’m a success in my personal life. From there, I’m ecstatic to be back on the field. I’m happy to be a part of a team again. I’m happy to have a job again, because there’s a lot of time in there where I wasn’t doing a whole lot and I didn’t know if this day would ever come.

“In comparison to where I was when I got drafted, I’m excited to be here. I’m excited to be back in the mix, a part of a team, taking snaps, running plays, going through a season and traveling with a group of guys who are going to go out on the field to compete and try to do something special here. It’s a good sign.”

Manziel knows better than most that it’s easy to say the right things. Doing it — checking your ego and taking a backup role when you believe you have the ability to do more — will be the bigger challenge. It’s a challenge that, from the sounds of it on a cold and rainy Saturday morning in Hamilton, Manziel will try to welcome.

“I’ve learned a lot through the mistakes. I truly feel that I wouldn’t be where I am today on a football level, on a personal level, going back into a locker room like this if I didn’t go through what I’ve gone through,” he said.

“I’m back to a point in my life where I’m not taking anything for granted. I’m happy with every single thing that’s going on. Sitting at this table wearing this shirt, being a part of this organization with a lot of history. Fifteen Grey Cup championships, there’s a lot of history here. That’s all I want to do, is come in and help this team win in whatever capacity it is. That’s all I care about.”