Breaking down the Alouettes’ QB competition 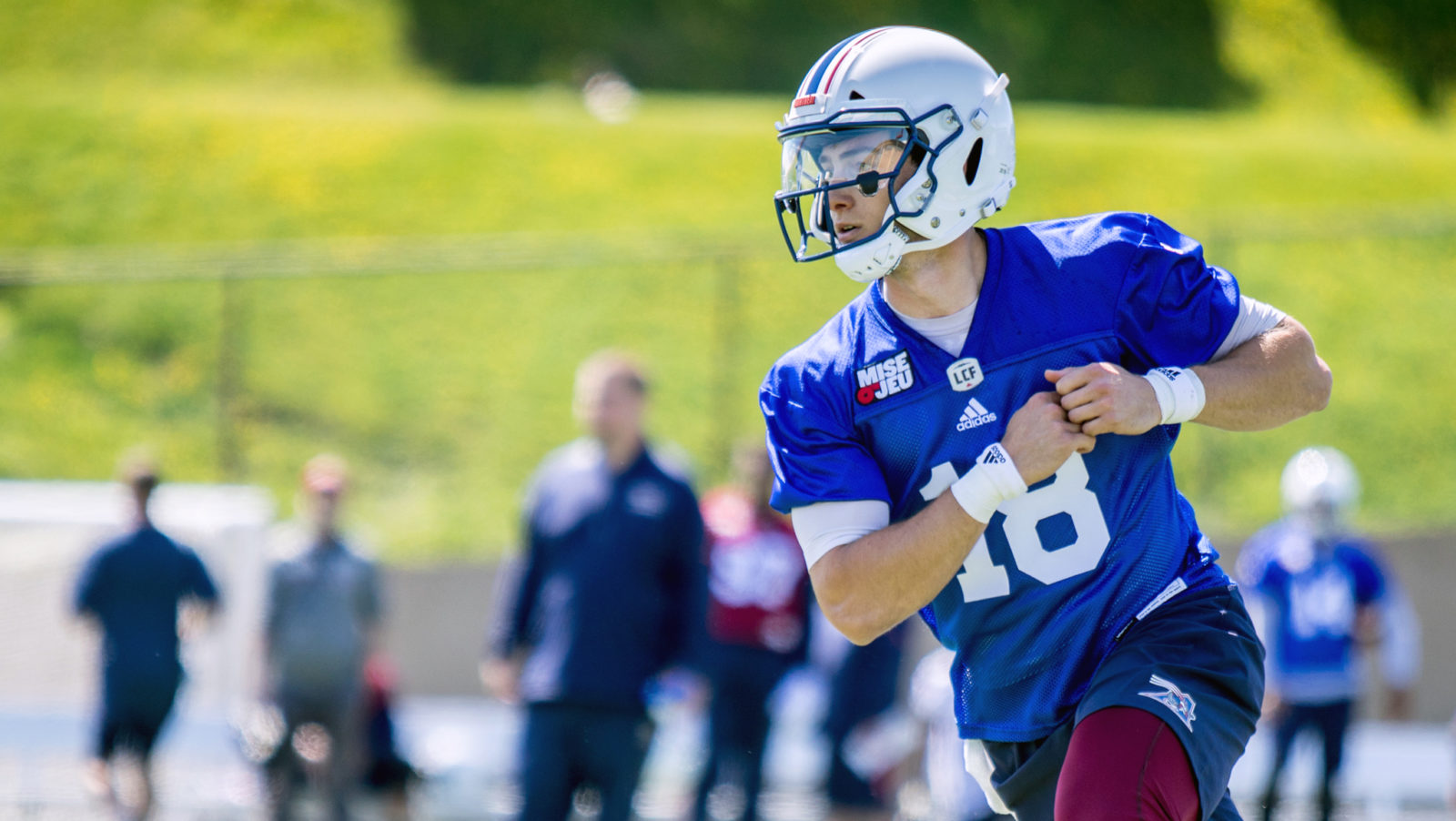 Breaking down the Alouettes’ QB competition

MONTREAL — Nothing brings out the excitement in training camp like a quarterback competition.

That’s why Montreal is the centre of attention as camps continue this week, with five names emerging in the hunt for a starting job under centre.

To the surprise of some, the veteran Drew Willy and sophomore Matt Shiltz appear to be the early front-runners for the Als, with Josh Freeman starting near the bottom of the Alouettes’ quarterback depth chart.

Of course, Freeman, a former NFL pivot, has the steepest learning curve of all those involved, while a lot can change in the next week or two as Head Coach Mike Sherman evaluates.

RELATED
» MMQB: Still plenty of questions with Johnny
» Checking Down: All the latest as rookies, QBs report
» Best in the League: Who’s the best shutdown DB?

“I’ll make the decision once it’s obvious to me who the starter is and we’ll move forward from there,” Sherman said Tuesday in an update with The Canadian Press. “They’re competing with each other but, at the same time, it’s a good group. They get along with each other. They help each other. I’m impressed.”

In what was named the number one position battle to watch in training camp by CFL.ca, let’s take a closer look at the five quarterbacks vying for a starting job.

Synopsis: Drew Willy is trying to re-write his legacy, which is currently tied to the trade that sent him to Toronto in exchange for T.J. Heath and the eventual first overall pick. The seventh-year veteran has been the victim of some difficult situations in his career, especially in Toronto where he was asked to start just weeks after being acquired. But he’s talented and physically-gifted, and now looking to prove he’s more than just a punchline.

Why he’ll win: Experience. Willy has thrown 1,164 passes in his career compared to just 70 by the other four quarterbacks combined. This is why it’s no surprise Willy is considered a front-runner in the QB competition, and a rookie head coach in Mike Sherman is likely to lean on the only quarterback he’s got with advanced knowledge and experience in the three-down game.

Why he won’t win: Few will deny Willy’s talent, especially with his arm. His pitfall is that he has a reputation of unraveling under pressure. That’s been well-documented throughout his career playing behind struggling O-lines in Toronto and Winnipeg, and some will say his tendency to hold onto the ball too long hasn’t helped. There will also be questions about his ceiling. At 31, is there any untapped potential? Is Willy a good QB who’s been in unfortunate circumstances, or is it a case of ‘what you see what you get’? 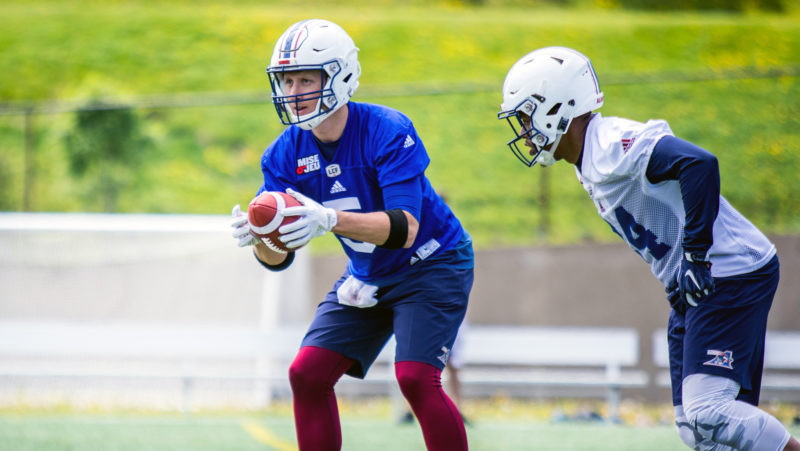 Drew Willy is considered to have a good chance to win the Als’ QB competition (MontrealAlouettes.com)

Synopsis: Matthew Shiltz was almost out of football before getting a call from the Montreal Alouettes before camp last year. The 25-year-old took his opportunity and ran with it, playing well in pre-season and generating some buzz among fans while Darian Durant worked in the foreground. Shiltz is currently seen as the quarterback of the future in Montreal.

Why he’ll win: Upside. After getting his feet wet late last season, Shiltz has the second-most experience of any quarterback on the depth chart. The Als’ top quarterback prospect has delivered on his billing so far in camp, apparently distancing himself from the rest of the field as he goes side by side with Drew Willy. At 25, the future might be now for Shiltz and the Als.

Why he won’t win: Why rush him? The Als have some things to figure out on the O-line, and they have an experienced veteran in Drew Willy and a highly-touted quarterback in Josh Freeman. Let Shiltz develop quietly in the background and soak up everything he can instead of being thrown into the fire. There’s nothing to lose by being patient.

Synopsis: At 22, Antonio Pipkin is just a kid compared to the rest of his competition. Pipkin saw his first game action late last season when he could barely complete a pass, going 2-for-9 against the Hamilton Tiger-Cats. But he’s got upside, owning Tiffin University records for passing attempts, completions, yards and touchdowns, and he’s a dual-threat after rushing for 2,207 yards and 25 touchdowns in college.

Why he’ll win: Pipkin’s athleticism and dual-threat ability could win the Als some games, especially in front of what’s considered a highly-talented defence on paper. There’s also excitement about his upside after coming in from the NFL as a 21-year-old last April. The success of Jonathon Jennings and Bo Levi Mitchell in their early 20s proves younger quarterbacks can grasp the three-down game quickly.

Why he won’t win: Ah, the double-edged sword. Pipkin’s age could help him, as stated above, but more likely the Als are looking for someone a little more seasoned, especially considering Kavis Reed has a lot riding on this season and Mike Sherman is new to the CFL. Albeit unfair to judge a quarterback for one half of football, Pipkin also showed late last season he still needs more time.

Experience: No prior CFL experience

Synopsis: Josh Freeman is the big ticket in Als camp, coming to the three-down game after seven seasons in the NFL and nearly 14,000 career passing yards. The talk all off-season was that the starting job would be his to lose, but reality may be hitting this week in the steep learning curve that comes with the Canadian rendition of the game — especially for quarterbacks.

Why he’ll win: Physical dominance, natural ability. Freeman comes into camp a towering 6-foot-6 and something like 240 pounds, and he says he’s in great shape. It’s like he was born to play quarterback, and he can inject some life into an Alouettes offence that struggled to a three-win season in 2017. Oh, and as a former NFL first-round draft pick, he’d probably sell some tickets and jerseys doing it.

Why he won’t win: He’s just not ready yet. It was unreasonable to expect Freeman to walk into camp and win the job considering what he’s up against, from the waggle to the extra man in the huddle and 12th man on defence. Not only has Freeman been out of football for the last couple of years, now he’s in a new country, with a first-time CFL head coach, new offensive coordinator, new playbook and a just shy of a million new concepts to absorb. Rushing him would be a mistake. 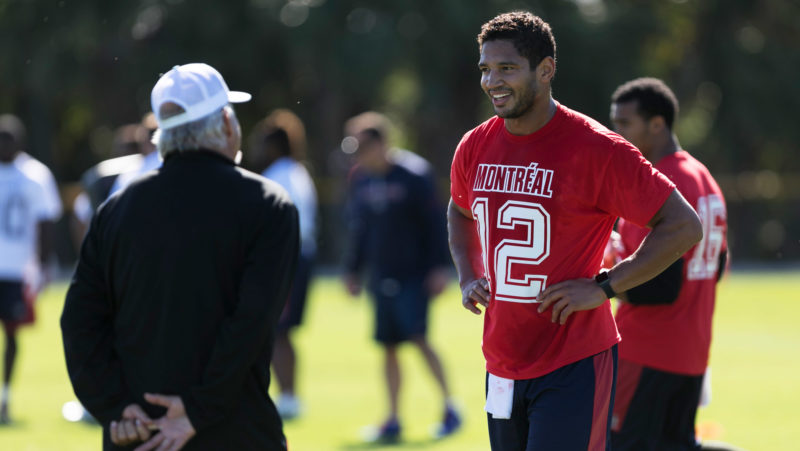 Josh Freeman comes to the three-down game with a steep learning curve (MontrealAlouettes.com)

Experience:  No prior CFL experience

Synopsis: Garrett Fugate is a true CFL rookie after signing with the Alouettes in January. He started in two of his four seasons at Central Missouri, throwing 31 touchdowns and just nine interceptions as a senior while averaging 304.6 yards per game. He’s also a good runner, amassing 457 yards on the ground to go with eight touchdowns. Enough to earn a brief cup of tea with the Green Bay Packers last December.

Why he’ll win: The odds are long, but crazier things have happened and Mike Sherman comes to the CFL with no preconceived notions and an entirely blank slate. The Als are in desperate need of finding their quarterback of the future, something they’ve lacked since Anthony Calvillo left in 2013. They should not be averse to risks.

Why he won’t win: Who is Garrett Fugate again? That’s probably the question a lot of fans are asking, and a reason he’ll have a hard time winning the job outright in his first professional training camp. Fugate should be given time to develop and climb the depth chart — if he can make the roster out of camp.