Ferguson: An in-depth look at QB efficiency at Ticats camp 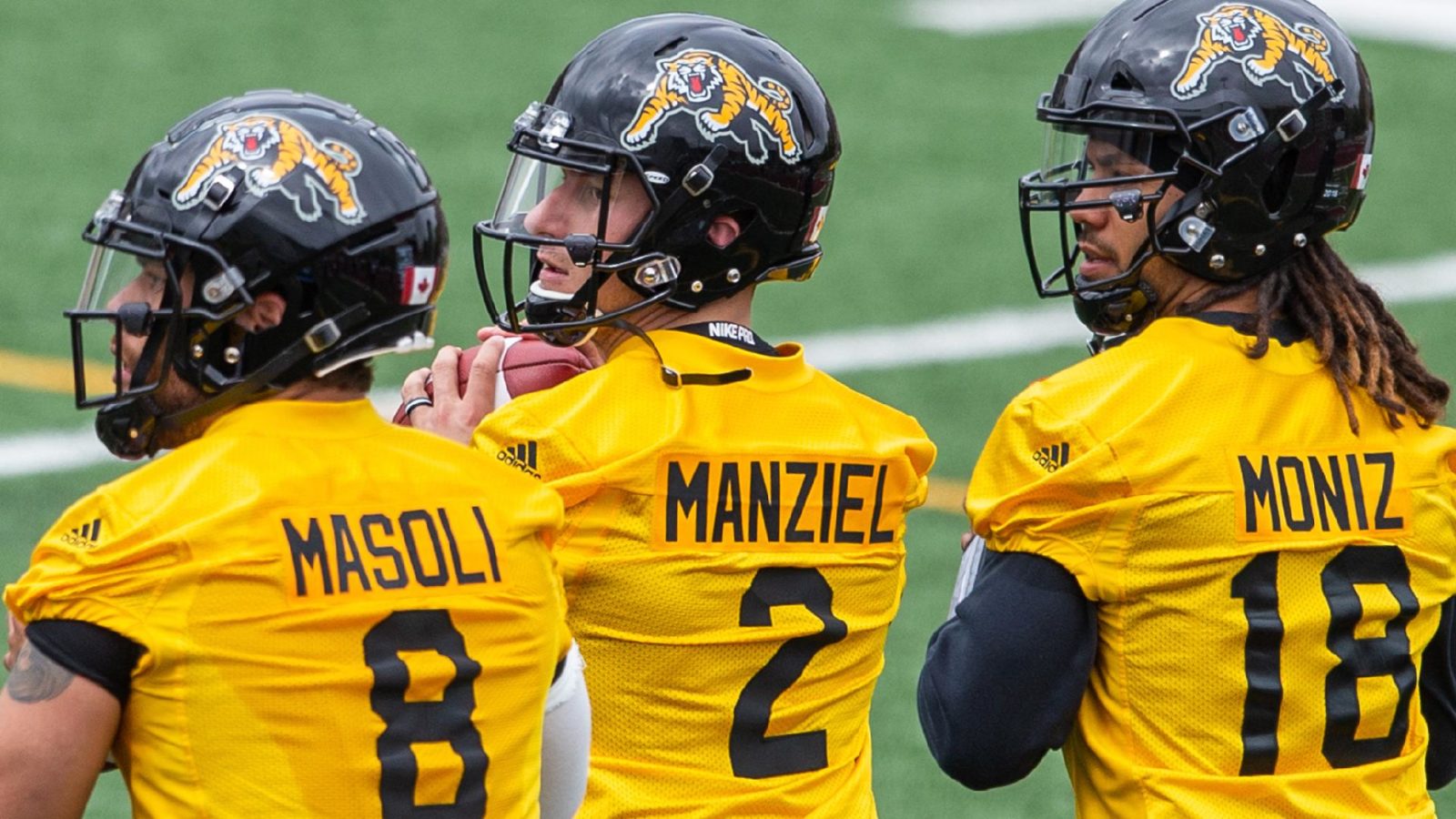 Ferguson: An in-depth look at QB efficiency at Ticats camp

Practice, we talkin’ about practice.

It’s crazy to think that famous Allen Iverson rant is now old enough to drive a car. While Iverson and many other athletes might not enjoy every second of practice or discussing its minute details, the reality is practice is where players hone their craft from the youngest of ages right through retirement.

As you get older and more comfortable as a veteran presence, practice can take on a less important meaning than it did as a rookie or new addition to a roster but practice will always be practice. A chance to develop and get better.

Nobody in the CFL has been more keen to use every second of practice in 2018 training camps than Johnny Manziel.

Manziel admitted from day one that he knew he was behind and needed to catch up in whatever way possible in order to compete for playing time as Hamilton’s quarterback battle appeared to heat up with a single signature on the dotted contract line.

With that in mind, I have spent the last two weeks closely watching Ticats training camp and specifically the quarterbacks with an even closer eye than I usually do in order to experience the baby steps of Manziel’s CFL career in all their raw glory.

What I’ve seen is a QB not unlike anyone else in the room. He wants to earn every piece of praise. Spend time around Johnny and you quickly realize the perception and reality perpetuated at large don’t match up.

A quarterback known for his ability to scramble to make plays, Manziel arrived in Hamilton more prepared to listen than speak. A quiet student of the game waiting for a chance to apply that other world playmaking ability and athleticism to his new wide-field, waggle-bound surroundings. Oh, and the arm is for real.

The Manziel experience began slowly but he has consistently improved and fit in seamlessly as ‘one of the guys’. On the field I tracked Manziel, starter Jeremiah Masoli and the other three Ticats QBs (Bryant Moniz, Dane Evans and Vernon Adams Jr.) in order to get hard early season facts on the level of play at the CFL’s most important position.

First a look at the distribution of reps through twelve training camp practices. 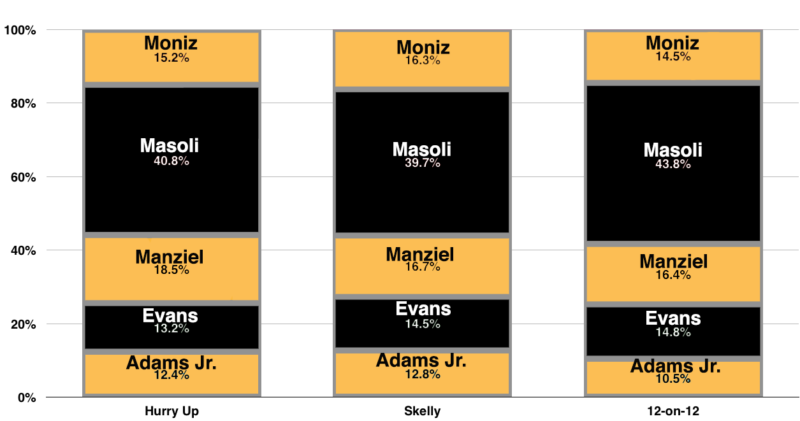 These numbers remain relatively similar amongst hurry up, pass skeleton (7-on-7) and team (12-on-12) but Manziel has been playing catch up within the last week as his work load increased. Whenever June Jones can squeeze Johnny in for an extra play or two, he does. A never ending effort to foster development and understanding.

As this learning curve has progressed, Manziel has become more willing to take shots down the field in practice. Something he didn’t get a chance to do in the Ticats first pre-season game against Toronto. 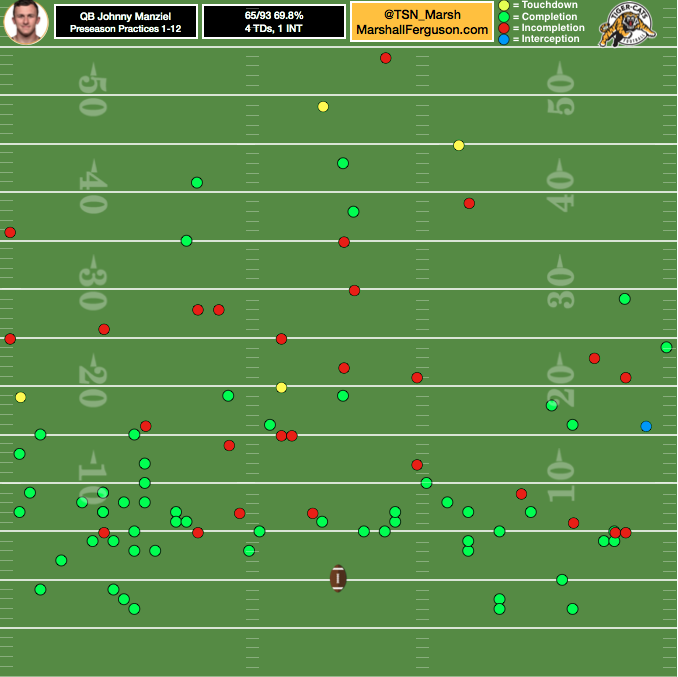 What strikes me about Manziel’s target chart, besides being 5/7 with two touchdowns beyond 38 yards down the field, is the highly efficient passing game under 20 yards to his left.

Outside the left hash and under twenty yards Manziel is 28/33 (84.8 per cent). Pretty good for a guy just trying to figure things out as he goes. The knock on Manziel coming in was that he’d arrive a wild scrambler unwilling to remain in the pocket and take the safe throws that move the chains in three down football.

If you’re watching closely, two weeks in that myth has already been debunked both in the practice throws above and the pre-season targets shown below. 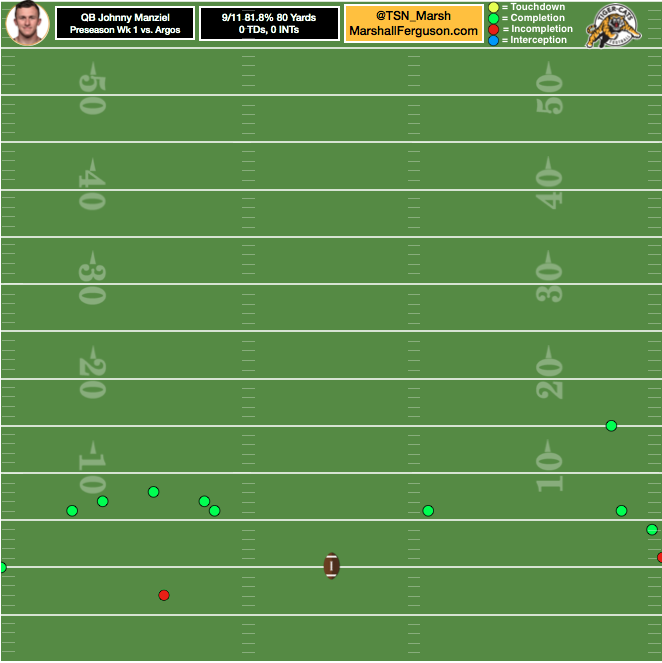 Next up, the incumbent starter Jeremiah Masoli. 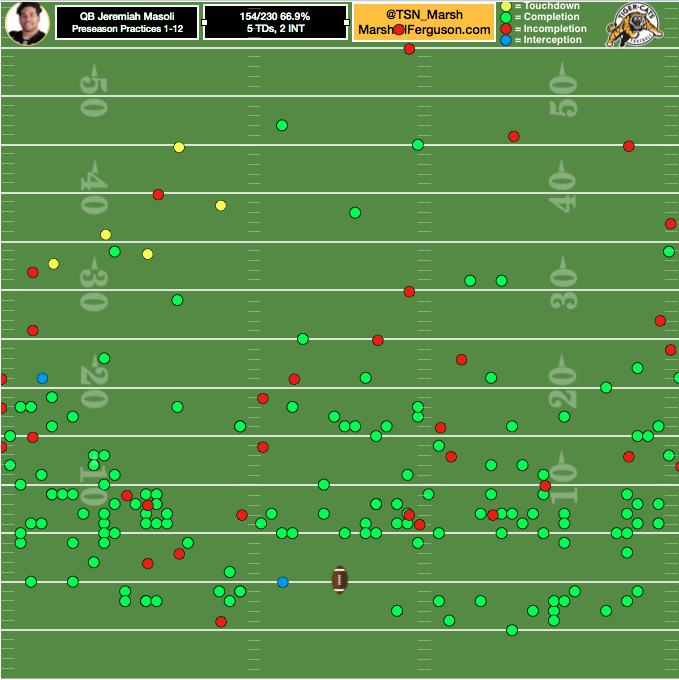 Not unlike Manziel, Masoli is a comfortable weak side thrower who has displayed the ability to push the ball down the field accurately. To his left outside the hash, Masoli is 50/60 (83.3 per cent) through twelve days of training camp.

For some perspective on why the perceived efficiency of Manziel and Masoli has propelled them to the assumed starter and backup role here is a look at the other three passers in camp. 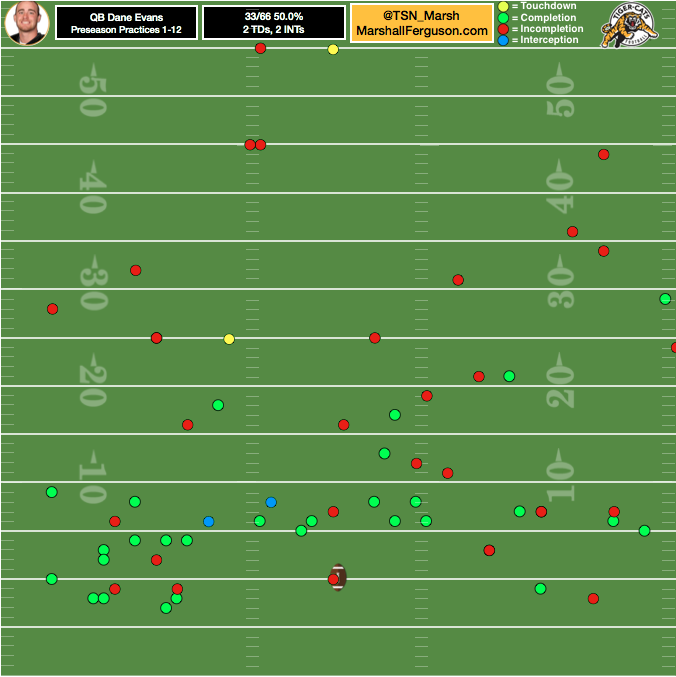 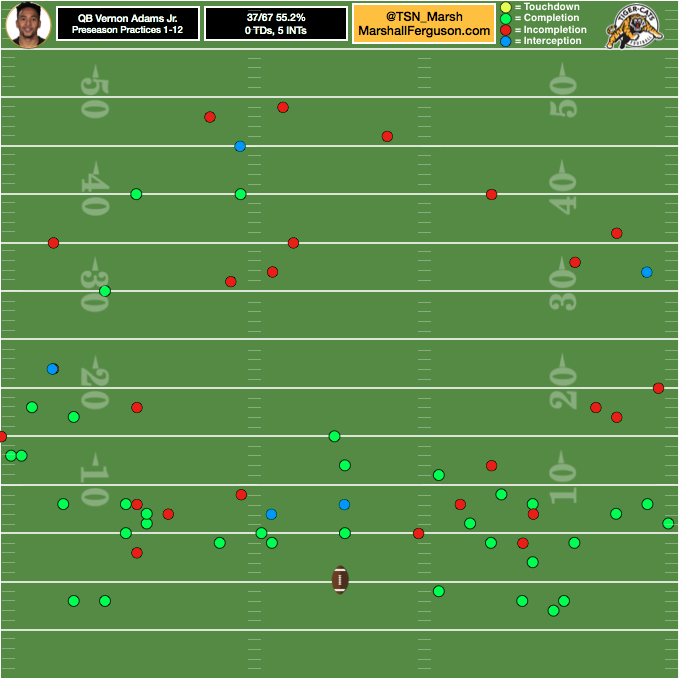 and journeyman Bryant Moniz, who might throw the tightest spiral of any Ticats passer in camp: 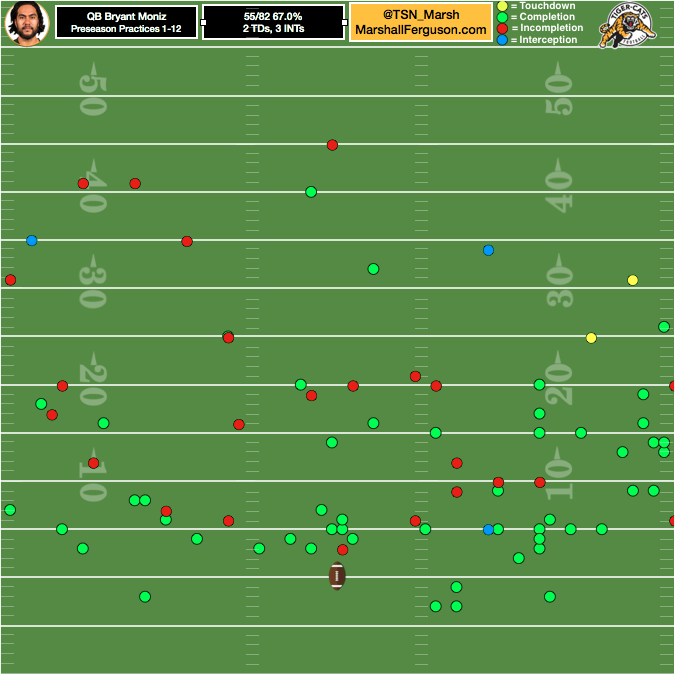 With the Ticats getting through so many reps in practice while Jones pushes a productive tempo, there are plenty of targets for offensive skilled position players to go around. 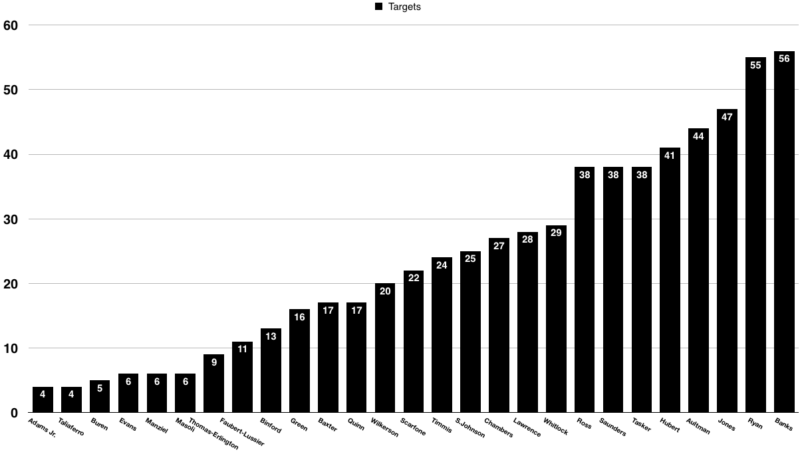 Shakeir Ryan has been getting plenty of work with the second team and national Mike Jones has stepped up big since the unfortunate season ending injury to Shamawd Chambers but leading the way through twelve practices is Brandon Banks, fresh off his 1,000-yard receiving season. 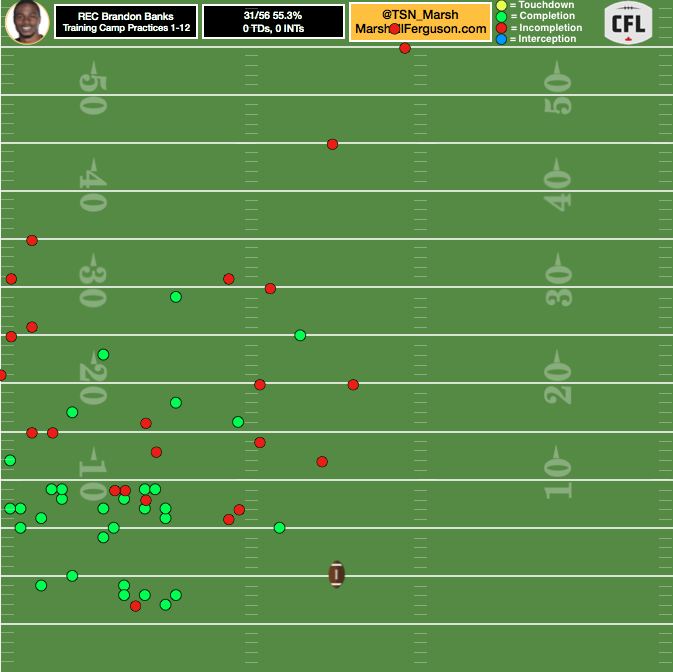 Banks is primed for another master year in the beloved June Jones passing system. If Luke Tasker can work his magic over the middle again this year, complemented by the explosion of second year CFL standout Jalen Saunders and a sound ground game, the Ticats offence could pick up where it left off at the end of 2017: as one of the CFL’s best and well-rounded attacks.

The question then of course being begged by many both north and south of the border is if and when the Manziel spice will be added for that final kick of entertaining flavour. Only time will tell but through two weeks and a game, one thing is for sure: The buffet of offensive options in front of June Jones demands attention and respect.