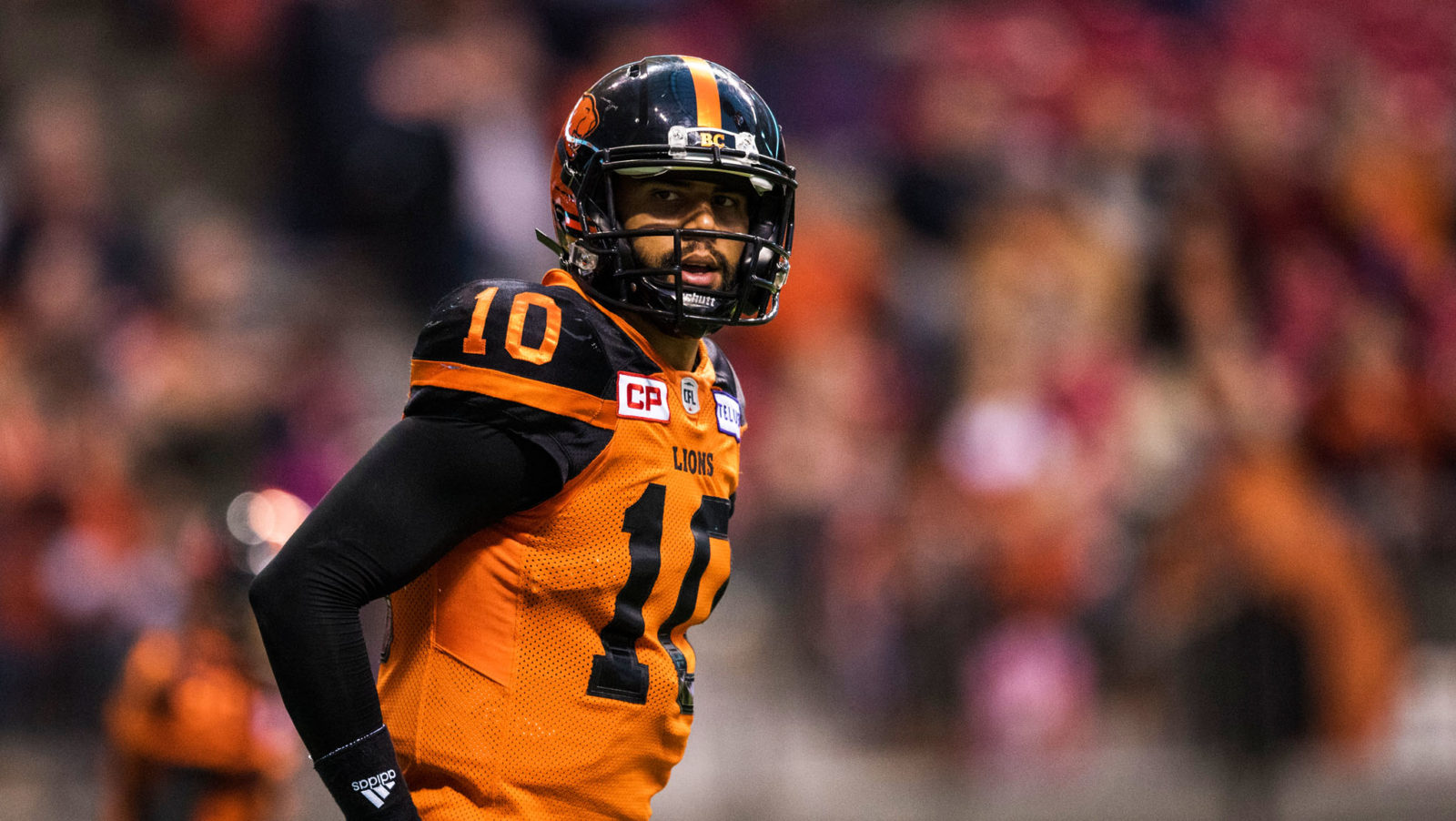 Last season we were supposed to see a step forward in BC, but the campaign instead gave way to a painful series of backward steps that conspired to send the Lions to a 7-11 record. Between the disappointing year of quarterback Jonathon Jennings, the failure of free agent acquisition Chris Williams and a defence that could not make stops at critical junctures, 2017 was a major letdown.

The Lions have considerable talent for Fantasy players to partake in, but much will depend on whether Jennings can rebound and if the team can find a reliable running back.

The stage appeared set for Jennings to have a monster 2017 season. Coming off a 2016 where he threw for 5,222 yards and 27 touchdowns and added four more on the ground, Jennings looked like he was about to become one of the top young faces in the league. That all changed after a season where he led the league with 19 interceptions, saw his average pass dip from 9.4 to 7.8 along with briefly losing his job to Travis Lulay. Once Lulay suffered a season-ending knee injury, Jennings returned to the lineup and did show flashes of his promise late in the season, including a 408-yard, four-TD effort against Winnipeg in Week 19, but ended the year with three interceptions and 145 yards against Toronto. 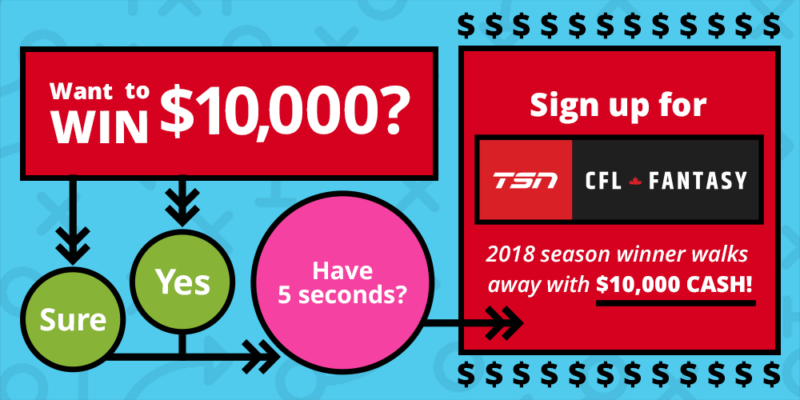 » RotoExperts: Your guide to the 2018 season
» Sign up and set your lineup for Week 1!
» CFL Pick ‘Em: See who’s favoured in Week 1
» How will position battles impact Fantasy?
» Breaking down points per reception
» Off-season Fantasy round up

Jennings, who will be 25 early this regular season, has a ton of potential the Lions will continue honing. Not all of his 2017 missteps were his fault; an offensive line that allowed a league-high 49 sacks and 141 pressures put too much pressure on Jennings to create on the fly, a facet of the offence he confronted far too often. The hope is that an improved line will help Jennings look more like the 2016 version who strafed secondaries and harried defences with his passing and running, instead of the 2017 version who looked uncertain at times. Fantasy owners will rightfully have a sense of doubt about Jennings, but he looks like a player who will make amends with his numbers.

Lulay will open the season on the injured list while still recovering from the torn ACL he sustained. He had thrown 10 touchdown passes and rushed for five more while giving the Lions their best stretch of offensive production during the year. The Lions signed Cody Fajardo away from the Argos to give them a reasonable option at pivot should Jennings go down. Fajardo, who scored five rushing touchdowns for Toronto last season, could see time as BC’s short yardage quarterback.

Although the Lions ranked a respectable fifth in rushing yards per game (92.6), the inability to break a big play on the ground weighed against them. BC had just seven runs of 20 or more yards, ranking just ahead of Edmonton.

Jeremiah Johnson had nine rushing touchdowns and finished fifth in the league with 918 yards. However, he had just four runs of 20 or more yards and had just one rushing major after Week 13. While he put up career-bests in receptions (48), yards (542) and touchdown catches (three), there are questions as to whether the 31-year-old Johnson may be about to hit a declining phase in his career. It’s hard to bet against a back that has scored a combined 25 rushing majors the past three seasons, but BC didn’t add Brandon Rutley and Travon Van as backups to Johnson. 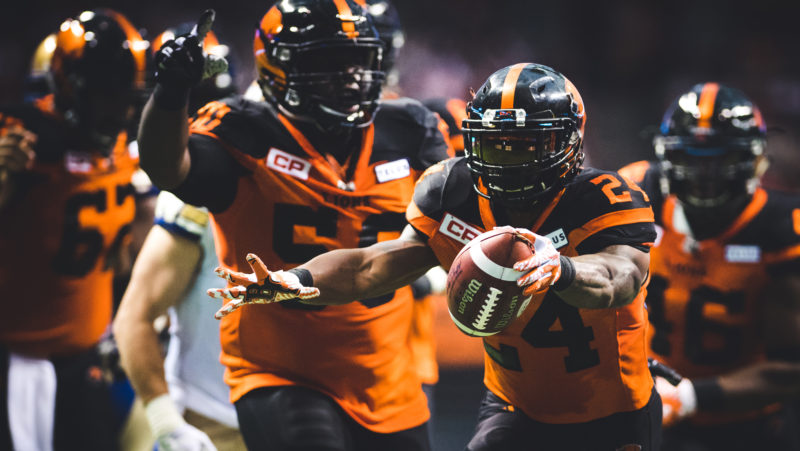 Can Jeremiah Johnson continue to produce at an elite rate among Fantasy RBs? (Johany Jutras/CFL.ca)

Rutley had a career-best 5.9 yards per carry with the Alouettes during an injury-plagued 2017. Durablity issues have hounded Rutley and could work against him in his bid to overtake Johnson. A year younger than Johnson, Rutley has never played in more than 12 games in a season and might be best served as a complementary back rather than a featured runner.

Like Rutley, Van faced his share of injuries last season, playing in just six games with the Eskimos. The Lions are hoping the Van who helped Ottawa to a Grey Cup title in 2016 can show up on a consistent basis.

Until the team solves its issue at lead back, Chris Rainey will be the best Fantasy option in the BC backfield. Rainey remains one of the game’s elite all-purpose players, leading the league with 1,671 kickoff return yards on his way to a CFL-high 3,181 total yards. He also had his best season as a receiver by catching 51 passes for 494 yards and five touchdowns. A threat to score every time the ball is in his hands, Rainey’s versatility makes him a good RB1 who has four career returns for touchdowns.

Despite missing two games, Bryan Burnham became the team’s most reliable pass-catcher. On his way to earning West Division All-Star honors, Burnham finished fourth in the league with 1,202 yards on 82 receptions while pulling in a team-best seven touchdown catches. He was at his best early in the season when he recorded four 100-yard games in a five-game span, but Burnham exceeded 74 yards just once after Week 13. As good as his numbers were with shaky pivot play, Burnham could return to his big-play form of 2016 when he averaged 17.3 yards per catch. Fantasy players should look at him as a WR2 with the upside to do much more.

Emmanuel Arceneux took much of the season to get into a groove, yet looked like his All-Star self once he did. He recorded all four of his 100-yard games and scored three of his six majors from Week 10 on, finishing the year with 100 catches for 1,137 yards, marking the fifth time in the last seven years that he eclipsed the 1,000-yard barrier. Like Burnham, Arceneux falls into a crowded pack of solid WR2 options for Fantasy players, yet he could deliver well beyond his salary if Jennings improves his play. 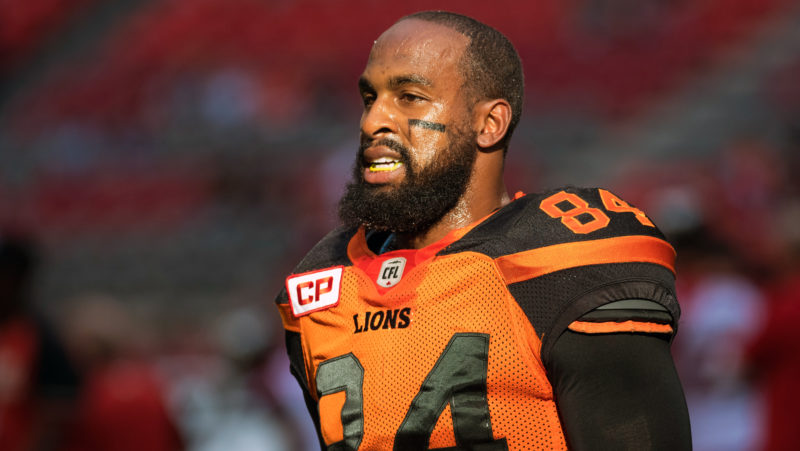 If Manny Arceneaux can pick up where he left off, Fantasy players will find value in the Lions’ receiver (Jimmy Jeong/CFL.ca)

The retirement of Marco Iannuzzi and the departure of Nick Moore means the Lions will have to find a way to fill in the 102 targets the pair recorded last season. Shaquille Johnson showed intriguing upside by averaging 17.4 yards per catch on his 30 receptions that included a pair of touchdowns. Entering his third season, Johnson might develop into a Fantasy bargain if he cracks the rotation. Danny Vandervoort, the third overall pick of the 2017 draft, had just one reception in his rookie season but will play a more relevant role this year.

Ricky Collins Jr. comes from Saskatchewan, where he appeared in just one game last season after breaking into the league with 48 catches and 720 yards in 2016. Well-traveled Kevin Elliott, now on his fourth team, will have a chance to see his share of targets if he can make the roster. Veteran Cory Watson brings the experience of eight seasons and 290 career receptions and still has some miles left in the tank at age 34. Kenny Lawler, who spent 2017 on the Seattle Seahawks practice squad, is a youngster who could be a factor with his big-play ability. Former Tiger-Cat Junior Collins will also have a chance to compete for playing time.

The Lions forced just 23 turnovers, second-worst in the league in 2017. Unable to make game-altering plays on that side of the ball, they allowed opposing offences to rack up a league-high 360 first downs. Opposing passers completed better than 67 per cent of their attempts on the BC defence, due in part to the unit’s failure to bring pressure. The Lions had just 28 sacks and 93 QB pressures, putting them near the bottom in both categories.

Tackling machine Solomon Eliminian re-signed after putting up 144 tackles. while since-departed lineman Craig Roh paced the unit with seven sacks. Still, the team parted ways with lineman Alex Bazzie and defensive backs Chandler Fenner, Louchiez Purifoy and Ronnie Yell, who combined for half of the team’s 14 interceptions. Ineffective play is a big reason why Fantasy owners should avoid the Lions until they can start making more big plays defensively.