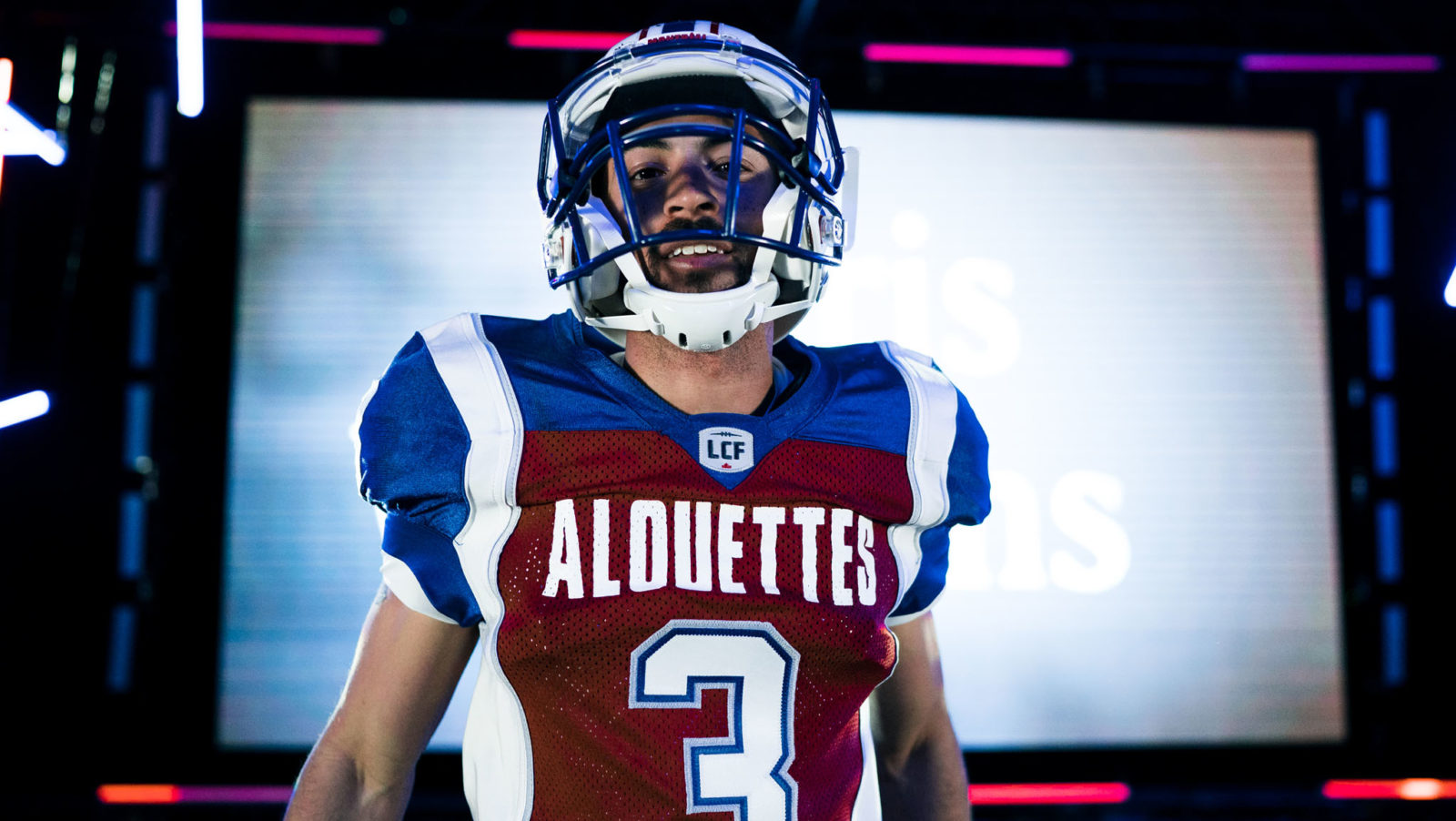 Chris Williams first game as a Montreal Alouette pretty much topped any game he played all last year for the BC Lions.

The speedy wide receiver had six catches for 98 yards in Montreal’s 22-10 loss to the Lions Saturday night at BC Place Stadium. He was targeted nine times, made a couple hard catches look easy, and should have scored a touchdown.

“We did some good things, moved the ball,” said Williams. “It seemed like we shot ourselves in the foot every time we had a chance to put some points on the board.

“We have to get better. The good thing is it is game one. We have plenty of time. We go back to work and turn this thing around.”

The best thing for Williams is he’s healthy again and showing the skills that made him a four-time East Division All-Star and 2011’s Most Outstanding Rookie. 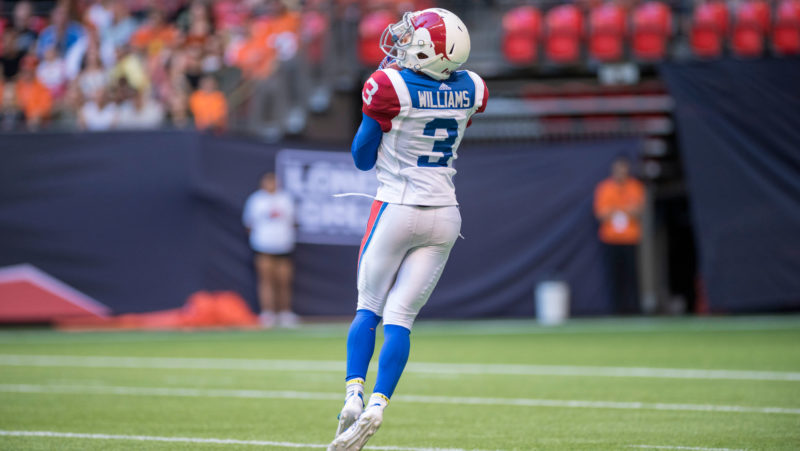 Williams makes a catch during Week 1 action against the BC Lions (Jimmy Jeong/CFL.ca)

Coming off a 2016 Grey Cup victory with Ottawa, Williams signed as a free agent with BC in 2017. The prospect of having the four-time 1,000-yard receiver joining a high-octane receiving corps that already had Emmanuel Arceneaux, Bryan Burnham and Nick Moore had fans anticipating a spectacular aerial circus.

Problem was, the show never got off the ground. Williams missed the first six games of the schedule recovering from off-season knee surgery before making his debut in early August.

Despite all his potential Williams sometimes looked lost in the Lions’ scheme. In nine games he managed 38 catches for 415 yards.

Williams best performance was Aug. 13 against Saskatchewan with six catches for 95 yards and his only touchdown of the season. The Lions finished 7-11 and missed the playoffs for the first time since 1996.

“We just never got in sync,” Williams said about his time in the Lions’ den. “It was all of us. Last year, honestly our offence just didn’t play good.

“It just wasn’t me, it was across the board. I’m looking forward to the fresh start for sure and just want to keep building.”

After Ed Hervey was hired as the new general manager in BC one of his first acts was to trade Williams to Montreal for veteran defensive end Gabriel Knapton.

Montreal GM Kavis Reed is hoping Williams adds a spark to an Alouette team that struggled to a 3-15 finish last year. Besides catching balls, Williams is a dangerous kick returner. In 2012 he was named the league’s Most Outstanding Special Teams Player after tying a CFL record with five punt returns for a touchdown in a single season.

“Chris is a very explosive individual,” said Reed. “The young man has the ability to go from zero to 60 very fast. Our offence didn’t have that explosive weapon last year, so we felt we needed that guy.”

There’s also the idea Williams wants to silence any whispers he might have passed his best-before date.

“You always want guys with a chip on their shoulder,” said Reed. “Chris definitely has that.

“It gives you an opportunity to get someone who still is in the prime of their career and also has something to prove. We feel very strongly he is going to contribute here.”

Williams likes the second chance he’s getting in Montreal.

“It’s nice to be in a place that wants you,” he said. “You get traded (to) someone who wanted you, brought you in for a reason.

“They have given me opportunities to make plays. So far, we’ve done it, but just not to the level we want too.” 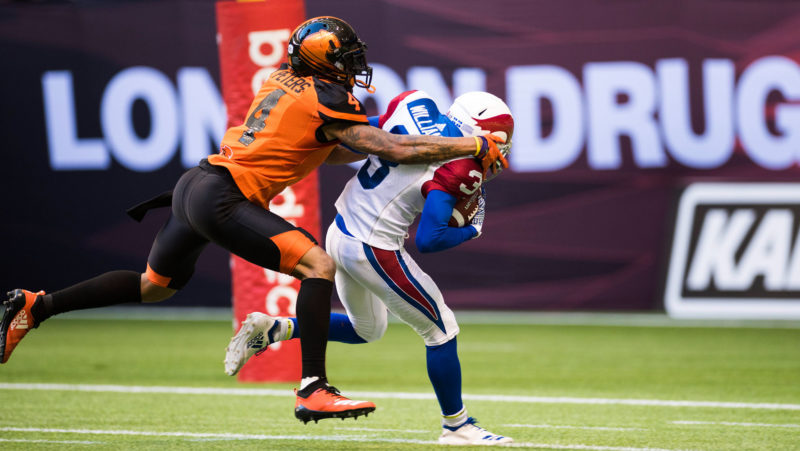 Williams gets tackled near the end zone at BC Place Stadium (Jimmy Jeong/CFL.ca)

Williams’ longest catch of the night against the Lions came in the first quarter when he hauled in a 56-yard bomb from quarterback Drew Willy. Williams looked like he was going to score before the ball was knocked loose by a defender. It rolled into the end zone where it was recovered by Eugene Lewis for the touchdown.

Facing a second-and-10 in the second quarter, Williams made a pretty catch coming back to the ball to keep a drive alive.

“I’m sure he wants to go out and have a big year,” he said. “The more we get him the ball the more successful we can be. He’s going to be a big part of what we do.”

The Als have other sure-handed receivers in Ernest Jackson, B.J. Cunningham and running back Tyrell Sutton.

At five-foot-nine and 155 pounds, Williams won’t overpower defensive backs. His biggest weapons are his speed and route-running precision.

“A lot of people don’t want to play man-to-man against him,” said head coach Mike Sherman. “If they do, they will play with somewhat of a cushion. I think he can force people into playing a little more zone because of his speed.

“We need to get him the ball more and let him run with it after the catch.”

Cunningham, who had over 1,100 yard and four touchdowns for Montreal last year, said having Williams on the field creates more room for all the receivers.

“He changes the defence up for us, guys guard him different,” said Cunningham. “Any defence that has to adjust to you means you are doing something right.

“We are going to be a problem. Give us another week.”

Last season may have been frustrating for Williams, but he doesn’t seem to hold any grudges. After the game he exchanged hugs with quarterback Travis Lulay – who is still recovering from a knee injury – and head coach Wally Buono.

“Travis is a friend, he’s been a friend for a while,” said Williams. “Wally had to do what he had to do.

“It is what it is. There is no hard feelings. This is a business. If you get your feelings hurt in pro football it’s the wrong job for you.”