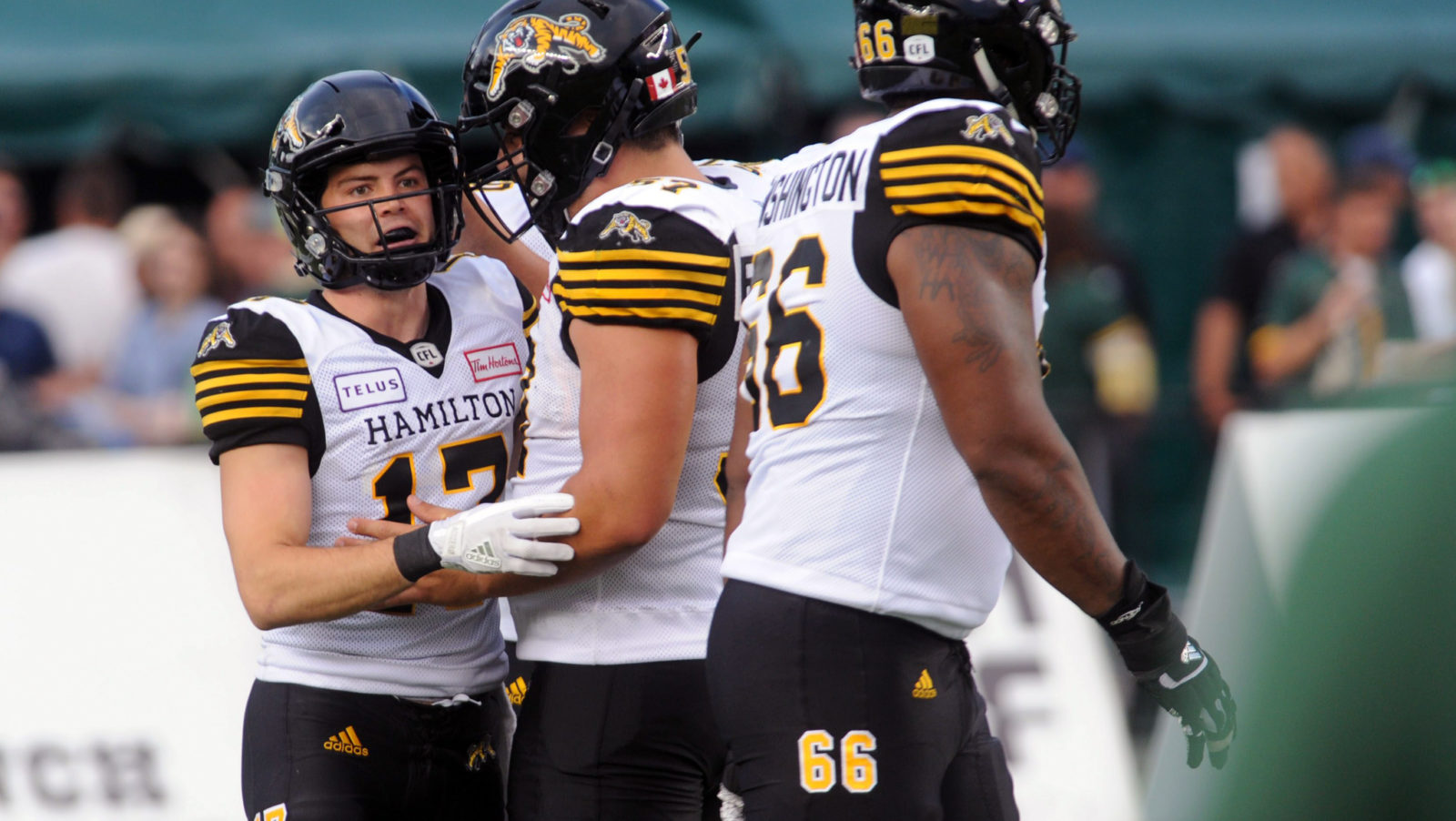 TORONTO — Are the Hamilton Tiger-Cats for real?

It’s been an impressive and unexpected start to the season for the Ticats, who have led after seven of eight quarters and gone wire-to-wire with two of the CFL’s best teams — on the road, no less.

While Jeremiah Masoli continues his elite level of play and Jerry Glanville’s defence continues to settle in, the Ticats have carried forward their momentum from last year and appear to be a legitimate Grey Cup contender out of the gate.

Joining the Ticats on their upward trajectory are the REDBLACKS and Bombers, while the Argos and Riders take a step back.

Six thousand fans were handed replica Grey Cup rings as the Argos celebrated their 2017 championship on Saturday, but the festivities were short-lived. Bo Levi Mitchell and the Calgary Stampeders walked all over the defending champs, making the Stamps an obvious choice for early Grey Cup favourite following a 41-7 win. It’s early, but this could be the best Stamps team we’ve seen yet.

An unexpected loss to the Ticats sends the Eskimos to 1-1, marking their first regular season loss in seven games dating back to Sept. 30, 2017. C.J. Gable is off to a slow start with just 76 yards on 18 carries, while the Esks’ offence hasn’t quite exploded out of the gate as expected. Still, Jason Maas’ team gets the benefit of the doubt heading into a crucial West Division battle with the BC Lions in Week 3.

One game is all it took for the ‘Cats to leap from seventh to third in the power rankings. Clearly after an upset 38-21 win over the Eskimos, people are starting to believe in the June Jones-led Ticats. Hamilton’s hopes of winning the East start and end with Jeremiah Masoli, and so far the 29-year-old is coming through, guiding the team through a tough early schedule with impressive results.

The REDBLACKS’ home-opener couldn’t have gone much better, as vengeance was served in an Eastern Semi rematch vs. the Riders. Noel Thorpe’s new-look defence allowed only 10 points, while a banged-up O-line, including 2018 draft pick Mark Korte, persevered against Charleston Hughes and Willie Jefferson, keeping Trevor Harris mostly untouched.

Paul LaPolice had the perfect game plan for Chris Streveler‘s second-career start, and the rookie quarterback straight out of college responded with nearly 100 rushing yards and four touchdowns in total. If the Bombers can get through Matt Nichols‘ absence with at least a .500 record, they’ll set themselves up for a big run in the second half of the season.

The quarterback question persists for Chris Jones and the Riders, with Zach Collaros struggling in Week 2 before leaving the game injured and Brandon Bridge looking to step in and be the starter. The Riders will be hard-pressed to play late in November if they aren’t getting elite quarterback play.

The free fall continues for the defending Grey Cup Champs, who have been outscored 68-26 in two games while averaging 227.5 yards of offence — the worst in the CFL. A talented roster combined with Marc Trestman’s track record says it’s too early to panic, but the bye week comes at the right time for a team that could be without Ricky Ray for the foreseeable future.

Considering the opponent, the BC Lions’ Week 1 win over Montreal doesn’t have a lot of stock two weeks into the season. Still, the win is all that matters, and the Lions and Jonathon Jennings can prove they’re for real should they leave Commonwealth Stadium victorious. The Lions are an interesting dark horse early in 2018.

There’s nowhere to go but up for the Als following a 56-10 loss to the Winnipeg Blue Bombers. Rookie head coach Mike Sherman will be happy to hit the reset button after the team’s 13th straight loss, with the last win coming Aug. 11, 2017 against the Ricky Ray-less Toronto Argonauts.