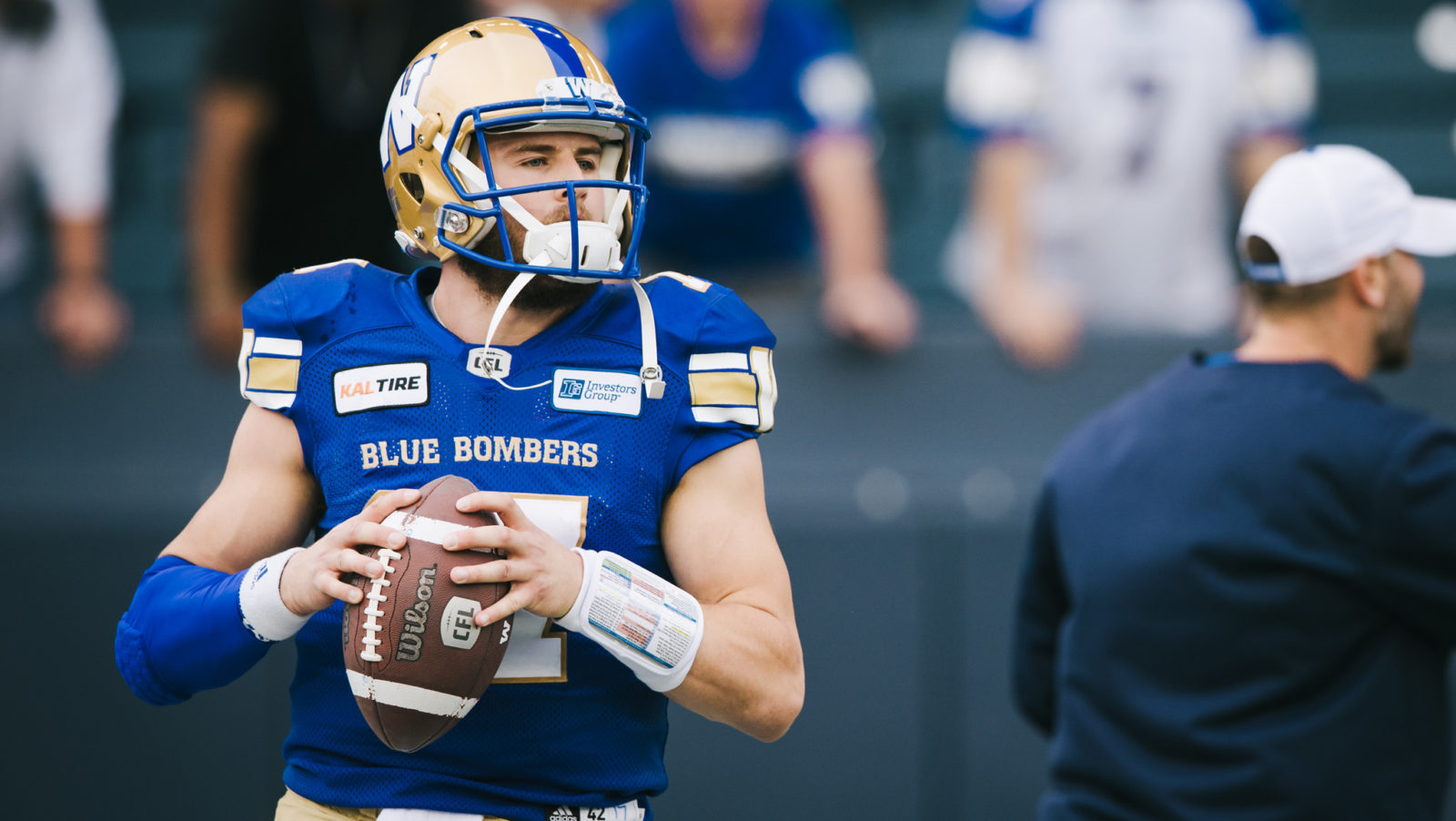 Each week Winnipeg Blue Bombers’ quarterback coach Buck Pierce prepares a list of items rookie Chris Streveler needs to correct and different aspect of the game he should focus on.

“That list has shrunk dramatically from week one to this week,” head coach Mike O’Shea told reporters in Winnipeg this week. “As long as you’re not seeing repeated mistakes there is a lot of growth there.”

Things have been moving very quickly for Streveler. The 23-year-old from the University of South Dakota has taken the fast lane from coming to training camp hoping to land the third-string quarterback job to being pressed into the starting role. 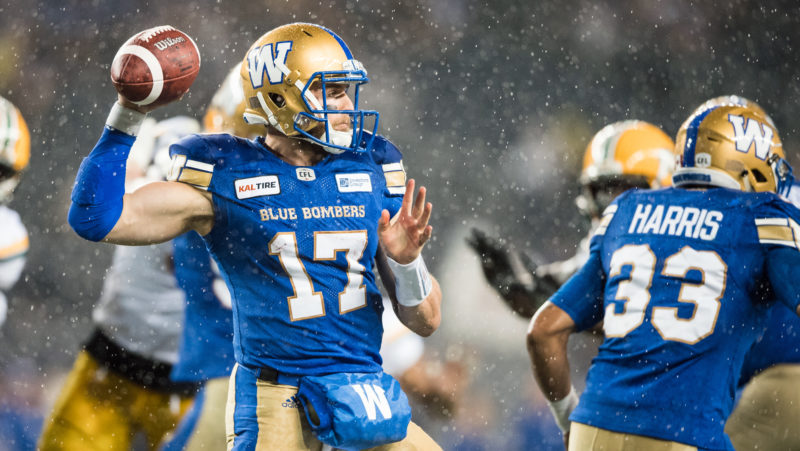 The progression of Chris Streveler has been leaps and bounds since arriving in the league he knew nothing about. (Johany Jutras, CFL.ca)

The winds of change may be howling around him but Streveler hasn’t been blown off course.

“The thing I try to do is focus every single day on what I have to do that day to get better and help the team,” Streveler said in an interview. “It’s a day by day process for me, especially still being so new to the league.

After just two games as the Bombers’ starting quarterback Streveler has shown considerable poise and plenty of potential. His quarterback rating of 94.9 is second best in the league. He’s completed 37 of 56 passes for 429 yards, has thrown two interceptions and has a CFL-leading six touchdown passes.

It’s a small body of work but still enough to turn some heads and raise a few eyebrows.

One person not surprised is Bob Nielson, Streveler’s coach the last two years with the South Dakota Coyotes.

“He’s a very unique young man,” said Nielson. “I’ve been a coach at the college level 25 years, coached a lot of very talented players. It doesn’t surprise me at all that Chris has hit the ground running and been able to provide an impact for the Blue Bombers’ program.”

Streveler transferred to South Dakota after two years at the University of Minnesota.

“He immediately not just became a good player and a good quarterback, he became a tremendous leader,” said Nielson. “He is an exceptionally hard worker that went along with his talent as a quarterback.

“He’s a quicks study. He’s very football smart. If you show him something once he’s got it. He really is able to process information very quickly.”

Streveler spent the winter between his first and second year studying film, watching what he did the previous year and looking for ways to improve. He also immersed himself in the offensive scheme, learning every detail. 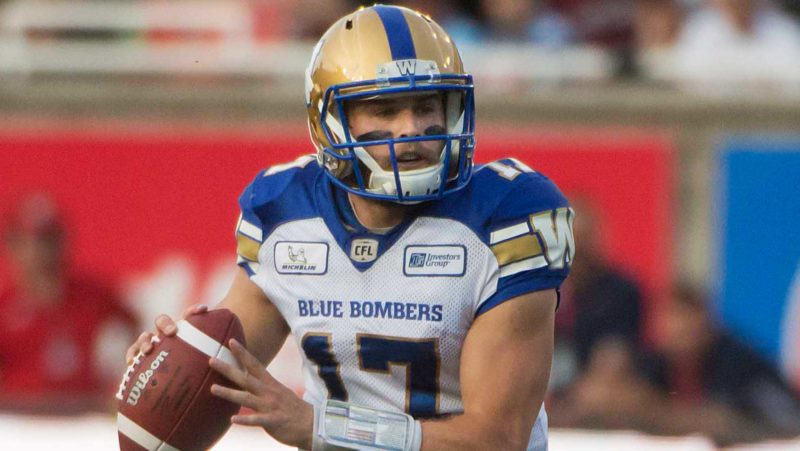 Coming in relief of Matt Nichols, first-year Streveler has the Blue Bombers sitting at 1-1 heading into their Week 3 matchup against Hamilton. (Peter McCabe, CFL.ca)

When he wasn’t in the film room he was training in the gym. That same worth ethic continued once the season began.

“He was the first guy on the practice field and the last guy off every day,” said Nielson. “Not only (was) he one of our best players he was one of our hardest workers.

In his two seasons at South Dakota Streveler threw for 6,081 yards and 54 touchdowns. Despite being named an all-American he went undrafted by the NFL.

He admits before coming to Canada he knew little about the CFL.

“I didn’t know anything about the league,” he said. “I never really watched the game, didn’t know what a waggle was.

“When I got here it was pretty well all fresh.”

When the Bombers lost starter Matt Nichols for four to six weeks with a knee injury the spotlight suddenly turned to Streveler. He became the first rookie quarterback to start a game right from college since Anthony Calvillo with expansion Las Vegas in 1994.

In his first game against the Edmonton Eskimos, Streveler was sacked twice and threw an interception in his first seven plays. He regrouped and went toe-to-toe against veteran Mike Reilly as the Bombers lost 33-30 on a late field goal.

In Winnipeg’s 56-10 beatdown of the Montreal Alouettes last week Streveler completed 22 of 28 passes for 246 yards, three touchdowns and had a game-high 98 rushing yards on 10 carries.

The six-foot-one, 211-pound native of Crystal Lake, Il., credits some of his success against Montreal to the early mistakes he made against Edmonton.

“I think anytime you can get some game experience under your belt it makes you that much more ready to get into that experience again.”

Streveler, who will start again Friday when the Bombers play the Tiger-Cats in Hamilton, has started to feel comfortable playing the Canadian game. He also realizes the little bit he’s learned pales compared to what he doesn’t know yet.

“It’s the overall experience of seeing different pictures,” Streveler said. “Every single day at practice I’m going against our defence and seeing the different ways they are playing and going to games and seeing how teams try to play us.

“Being around Canadian defences for a month I’m trying to soak up as much information as I can just to see all the different pictures and all the ways people are playing. That’s the thing I have to learn and get better at.”’

This week O’Shea said Nichols may return “sooner than later.”

Until then, he’s impressed with Streveler’s progression.

“He’s remained very even-keeled,” said O’Shea. “He keeps going back to the process of trying to get better. He understands there is a lot that goes into that.

“He doesn’t believe this is just him going out there and doing it. He understands that football is a team sport. He wouldn’t be this successful this early if he didn’t have a lot of that stuff figured out.”