Landry: Rogers’ return to Calgary comes with a heavy heart 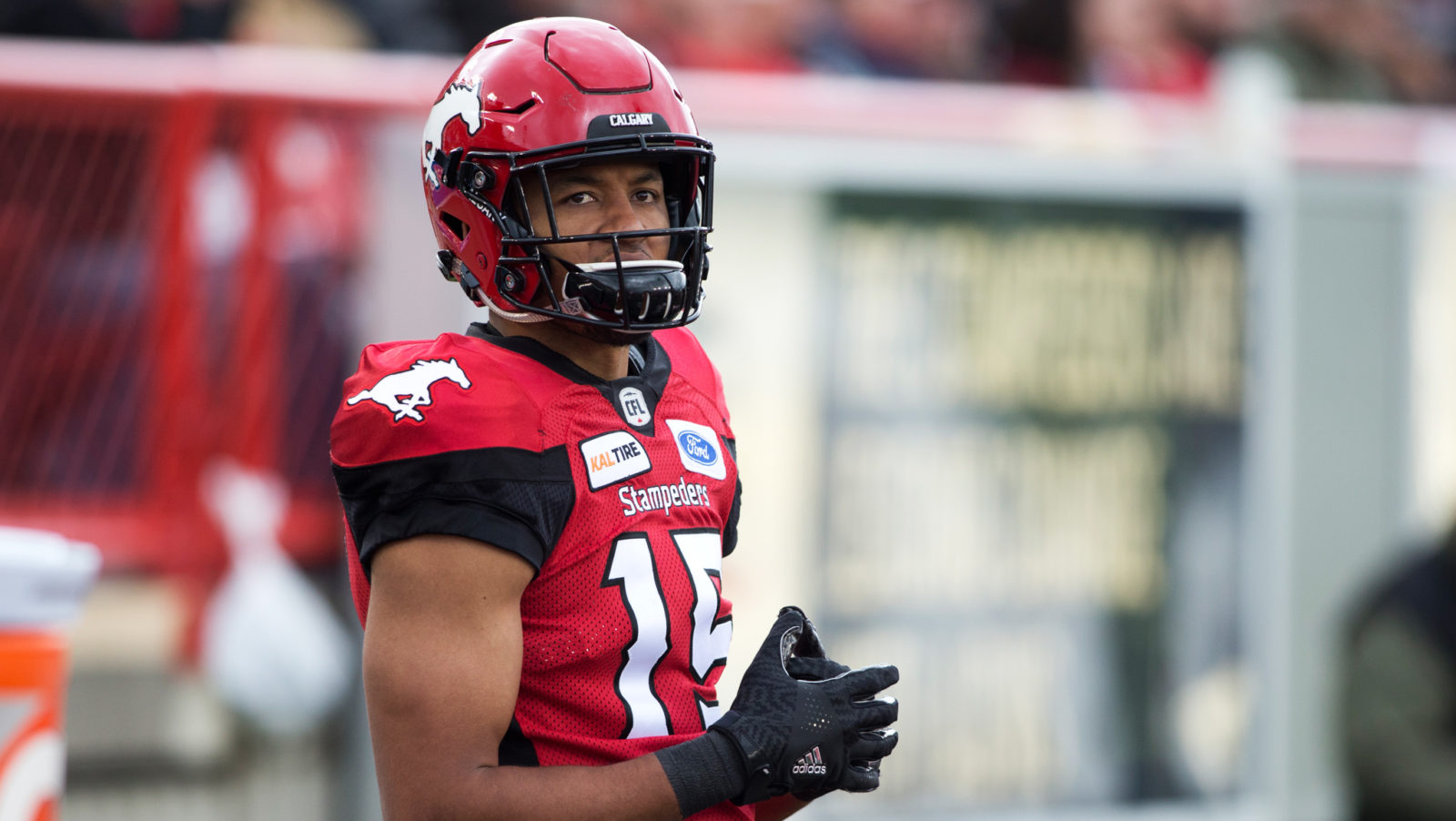 Landry: Rogers’ return to Calgary comes with a heavy heart

Eric Rogers ran his route into the end zone, hand-fighting with Toronto’s Abdul Kanneh along the way. Turning to his left to look for a pass from quarterback Bo Levi Mitchell, he separated himself from Kanneh, twisting in counter-clockwise fashion as he started to fall backwards, pulling in Mitchell’s back shoulder strike, and hitting the turf with a catch that put his Calgary Stampeders ahead by a score of 16 – nothing.

He got to his feet and pointed to the heavens, because he was certain that his biggest fan was applauding from above.

Rogers made a few spectacular plays on this night, a couple of them even better than that touchdown grab, quite honestly. But this one was his favourite and not because it was his first major in the CFL since November 22nd, 2015. 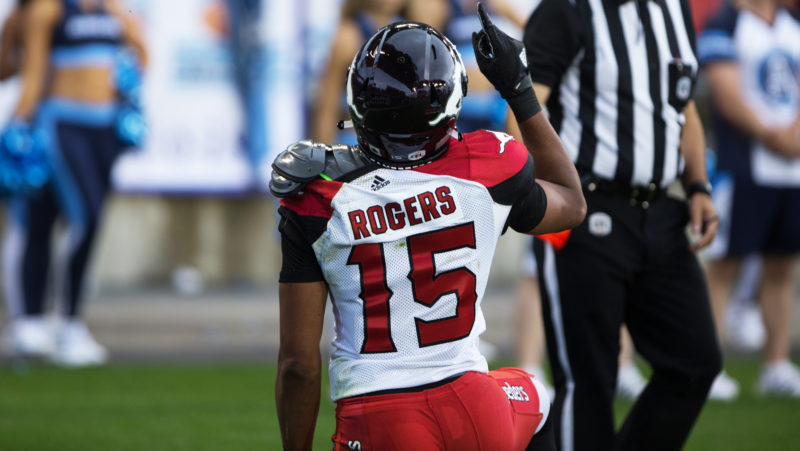 Eric Rogers points up for his late mother after his touchdown against the Toronto Argonauts (Peter Power/CFL.ca)

It was because this touchdown was for his recently departed mother, Carrie, who was suddenly taken from him earlier this year. She was just 53 years old.

“That one’s for her, especially,” says Rogers. “It was always gonna be the first one. Just let her know that I’m still thinking about her. Still missing her.”

“I knew she was watching.”

Eric Rogers is back in the Canadian Football League and he is sending early messages that he is set to reclaim his throne even if he will be doing it on a surgically repaired knee and with a heart that needs time to heal. But he’s got familiar faces and friends from his Stampeders family along for the journey, and that is a big boost for the native of Glendora, California, as his steps become less tentative and that re-habbed knee of his catches up to the other, more healthy one.

“It’s still in progress, as far as being as strong as my other leg but it’s getting there,” he says. “It’ll get there.”

Rogers was the CFL’s best receiver in 2015, topping the statistics page with 1,448 yards on 87 receptions, scoring ten regular season touchdowns and another three during the playoffs. He was an all-star and when he left for the NFL and the San Francisco 49ers, it was a big, big blow to the Stampeders.

Big and fast, with great hands – once again displayed in Toronto last Saturday night – Rogers was a crisp route runner who was feared by defences across the league. The 49ers were thrilled to have him as he’d attracted interest from a bevy of NFL teams after his sensational CFL campaign and he was making his mark at training camp when he blew out his ACL, forcing him to miss the entire campaign.

He had surgery and rehabbed for months. Trouble remained, however and he had the knee scoped again, seven months later. It was then that he started to feel that, physically, things were on the upswing as he got a full range of motion back in the knee. However, the Niners released him in May of 2017 and Rogers wouldn’t play a down of pro football at all last year. Signed by the Stamps towards the tail end of this year’s training camp, Rogers would finally again step on a field on game night, when he made one catch for 13 yards in Calgary’s Week 1 win over Hamilton.

It was a successful, if conservative, return.

Week 2 was a different matter, with Rogers lighting things up and delivering a touchdown for his mom.

Rogers’ mother, Carrie Barron, passed away suddenly this past winter, when complications arose after a surgical procedure. It was February 12th, her son’s 27th birthday, and he had just left the hospital an hour before, when he got a call telling him he’d better return. Just like that. He rushed back. He would lose his mother and mentor not long after receiving that call.

RELATED:
» Bio: Eric Rogers by the numbers
» Buy Tickets: REDBLACKS at Stampeders
» Start vs. Sit: REDBLACKS defence not worth the risk vs. Mitchell and Stamps 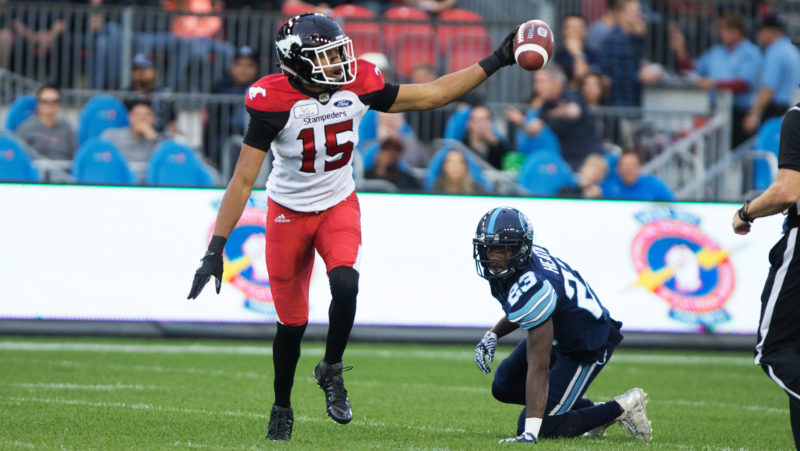 Rogers celebrates a catch in a match up against T.J. Heath (Peter Power/CFL.ca)

“She passed away a couple of hours into the early morning the next day,” Rogers said, softly, recalling that night. Then, he talks about his injury and subsequent release from the 49ers as though they were a blessing of sorts, simply because that sequence of events meant he was nearby more often for what would prove to be the last two years of Carrie’s life.

Two days before she was admitted to hospital, Carrie showed up at her son’s house to make him breakfast. “That was pretty good,” Rogers says, and you can hear him smile over the phone. “I loved that.”

It was, Rogers says, his mom’s insistence and devotion that helped make him the type of man he is today, with lessons in responsibility and compassion coming early and often. She never turned anyone away, Rogers says, when they needed a place to stay for awhile.

“She always provided for not only my family but for her siblings,” he says proudly. “She was always the one that was looked upon as the stable one. Always the one taking care of everyone. Even her brothers, her sisters, their kids.”

“She was the one with the good head on her shoulders and she passed that along to me,” Rogers adds, saying that among she and her six siblings, his mother was the only one not to run afoul of the law.

Having charted her own course and refusing to give in to the lure of the destructive behaviours of others, Carrie Barron did her best to be certain that her son would be mindful also, and Rogers carries her lessons and spirit with him.

“She always told me be a leader, don’t be a follower,” he remembers. “You know what’s right or wrong, you know what to do or what not to do. You have to make decisions and better choices everyday.”

So he became a young man who could hold fast against the currents of the wrong crowd, whatever the temptation.

“That just leads you to trouble,” he says.

Week 2 against the Argos was a revelation for Rogers, building in spectacular fashion on his modest Week 1 showing. He hauled in five receptions for 131 yards and added a second touchdown to go along with the one he dedicated to his mother. He made tough catches in traffic, taking contested balls away twice from Toronto defensive back T.J. Heath.

It sure looked like the Eric Rogers we knew from 2015. “No, not really,” he says, before explaining how he’s feeling.

“It’s just getting back into the grind, the process of practicing and then games every week, Rogers says. “It’s different than not playing two years in a row.”

“Bye weeks are gonna be important for me this year, for sure,” he adds, laughing.

There is a little extra soreness, a little more fatigue. After two years outside the stripes, there is the matter of returning to football shape and once again feeling comfortable with all aspects of a football life.

On that front, being back in Calgary gives Rogers a comfort for which he is thankful; at least he has a familiar city to be in and a slew of familiar faces and supporters all around as he strives to regain the normalcy he’d enjoyed for so many years, until the injury interrupted
it.

“It’s good to be back in Calgary,” he says. “Pretty much the same employees from top down, really. Same coaches, same equipment guys, same waterboy.”

“Imagine going somewhere new, to a new team where everything’s different and you have to worry about how you go out on the field (as well as) how you feel physically. It’d be a kind of whirlwind. So coming to the Stamps makes it a seamless transition into getting back. It felt good that way.”

Rogers still has work to do to get back to being the receiver he was back in 2015 and that’s something to think about as we reflect on his stellar performance in Toronto. What’s to come may be truly special. In the meantime, he knows that being part of what is quite probably the best receiving corps in the CFL affords him the luxury of not having to be the game breaker.

“I’m still able to contribute and help this team out,” he says. “I don’t think I have to be that same Eric Rogers I was before. I’m not running around as well as I used to but we have great receivers so I don’t have to put so much pressure on myself to be that guy since we have so many weapons.”

“I’ve always played for my mom,” says Rogers, reflecting on another lesson Carrie taught him; another demand she made of him. “She always liked watching me play. She always wanted me to show good sportsmanship. She didn’t really care about me winning or losing.”

He admits it’s something he’s had to work on, and he recalls being rewarded for the strides he’d made in that regard, back when he played what could have turned out to be his final game in the CFL had things gone differently. He caught three passes for 117 yards and a major, but the Stampeders lost the 2015 Western Final to the Edmonton Eskimos, 45-31. After the game, Rogers congratulated some old friends, Deon Lacey and Kendial Lawrence, and the moment was captured in a snapshot.

“My mom saw that and when I called her after the game she’s like ‘sorry to hear you guys lost but I’m proud of you. You had a good game. And you showed good sportsmanship at the end of the game, I saw you.’ That was the thing that stood out for me and made me feel better about myself.”

With such a close bond shared, and with Rogers’ touchdown moment against the Argos being dedicated to his mom, I wondered if perhaps he was thinking of playing the entire season just for Carrie.

“No,” he replies, indicating that it wouldn’t be enough and that he doesn’t need to make such a distinction, for a very good reason.

“Every day is dedicated to her,” he says.

His mom got her specially dedicated touchdown, last Saturday, from a grateful son who continues his comeback as he grieves her loss, carrying the lessons she taught him close to his heart.

That’s not to say there won’t be more. If the next time Eric Rogers catches a touchdown pass and then points to the heavens, you’ll know who it’s for.