Morris: Are the Lions ready to make a change under centre? 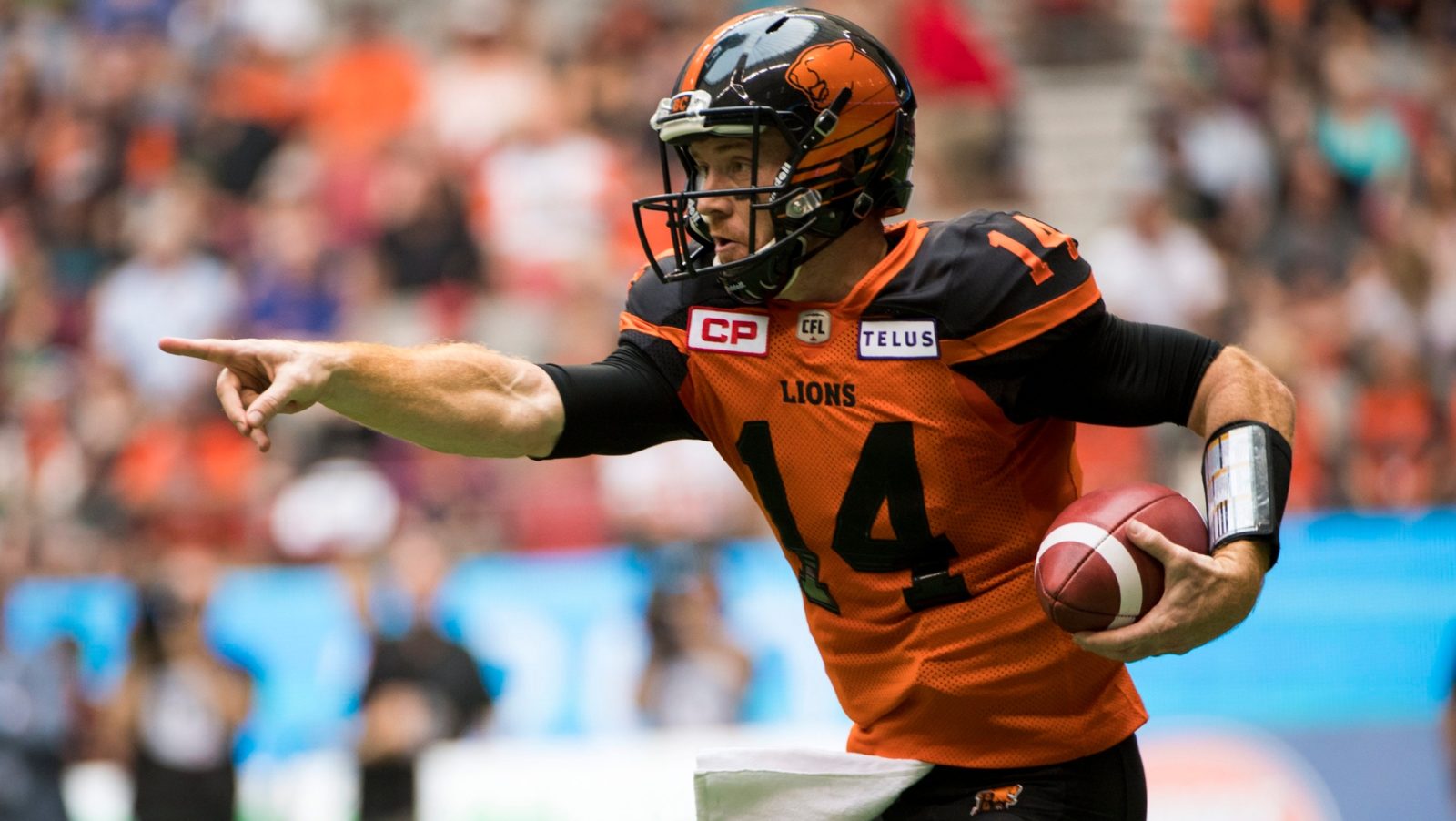 Morris: Are the Lions ready to make a change under centre?

If you listen to what the coach and quarterback say, you are left with the impression that Wally Buono would like to start Travis Lulay this weekend but Lulay still isn’t convinced he’s ready to play.

That could change this week during practice as the BC Lions (1-2) prepare to host the Winnipeg Blue Bombers (2-2) Saturday night at BC Place Stadium.

The Lions have lost back-to-back CFL games. They are looking to rebound after being pounded 41-19 by the Bombers in Winnipeg last week. 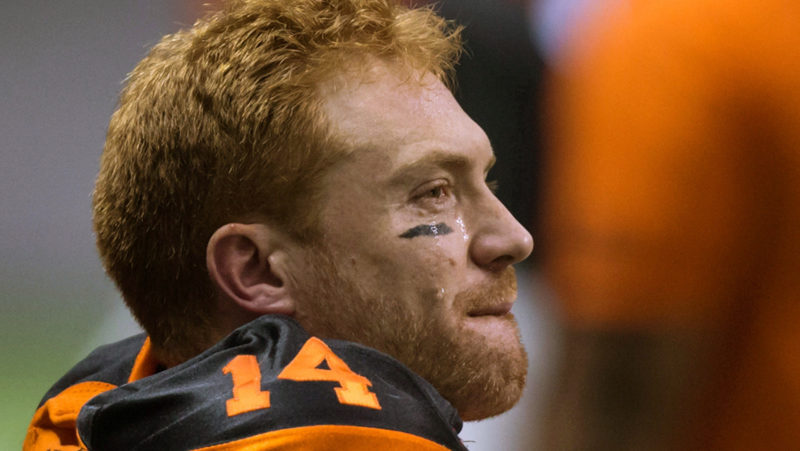 Travis Lulay is said to be sitting at 95 per cent in terms of overall health. The Lons are wanting to close that gap to 100 entirely before starting Lulay. (The Canadian Press)

Normally it would make sense for Buono to make a quarterback switch to bring some veteran leadership to the team. But Lulay sounds hesitant to pronounce himself battle ready after undergoing major off-season knee surgery.

After practice, Tuesday Buono said he didn’t know who his starter will be against Winnipeg. At that moment it would be Jennings but “that could change.”

Lulay met with team physician Dr. Bob McCormick this week and came away satisfied his recovery is “trending in the right direction.”

“I’m still ramping up in what I’m doing,” said Lulay. “I’m really optimistic and feel really good about the last couple of weeks.”

He still wants to “close that last five-per-cent gap to be fully game ready.”

Does that mean in his own mind Lulay isn’t 100 per cent ready?

“That’s a fair assessment,” he said.

Buono believes the more he practises, the more confident Lulay will become.

“I don’t know what five per cent is,” Buono said. “If there is a small, small concern, there’s a concern.

“Can it be alleviated (with) two heavy days of practice? Yes, it could. But then the player still has to feel comfortable.”

The one thing Buono won’t do is order a player onto the field.

“We never tell a player to play,” he said. “The doctors clear him; the doctors evaluate him and then there is a joint decision based on all three parties.”

Lulay appeared in just six games last year before suffering a season-ending injury in a Sept. 8 game against Montreal. He underwent surgery Sept. 26 to repair the meniscus and reconstruct the ACL in his right knee. 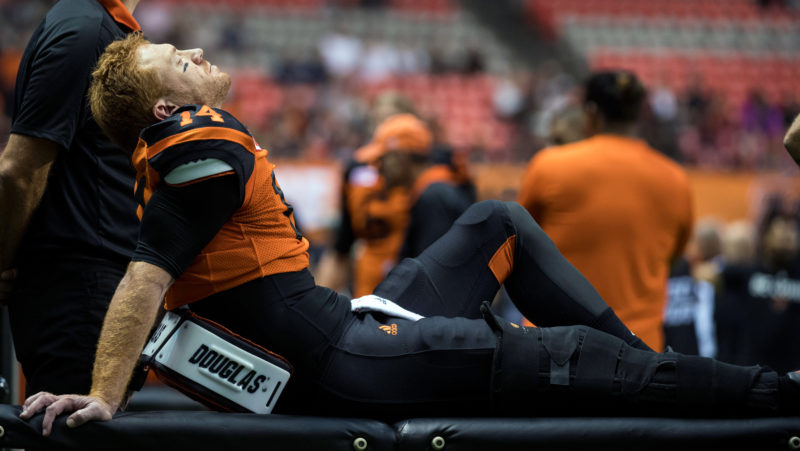 A former Most Outstanding Player, Lulay went down with a knee injury in a game against Montreal after appearing in just six games last season. (Jimmy Jeong, CFL.ca)

During recovery, he also had to deal with an infection.

Typically, it takes nine to 12 months to recover from this type of surgery. For Lulay its been about nine and a half months.

“I’m right in the front end of what is a normal window,” said Lulay.

The knee operation was the third major surgery in nine years for the 34-year-old former Most Outstanding Player who also has dealt with shoulder injuries.

Jennings hasn’t looked in sync this year. He’s completed 48 of 72 passes for just 487 yards, two touchdowns and three interceptions. He hasn’t thrown for more than 200 yards in a game and his 105 yards in last week’s loss were a career low.

“It’s not over,” said Burnham, who has 10 catches for 102 yards. “Jon is going through a little bit of adversity. When guys go through those tough patches people quickly, quickly forget all the good things he’s done.

“I really think he’s going to come out on the other side a top-tier quarterback in this league.”

Burnham understands it might take Jennings a few games to feel totally comfortable in the new system.

“Being the quarterback there is so many new components,” he said. “He has to know everything. For receivers it’s easy.

“He’s still getting it and I think he’s close. At the end of the day, that’s my quarterback. I’m going to ride with him the whole way.”

Lulay said there was a steep learning curve with Jackson’s scheme. He had an advantage understanding some of the terminology and schemes because Jackson was the Lions’ quarterback coach in 2013.

“There is a lot of familiar things,” he said.

There is a precedent for the Lions finding their legs after stumbling out of the gate. BC started the 2011 season with five straight losses, then finished the year 11-7 and went on to win the Grey Cup.

One of the differences between then and now, three of those early 2011 losses were by five points or less.

BC has been outscored 82-41 in consecutive losses to Edmonton and Winnipeg. The Lions offence is averaging just 21 points a game while managing only 286.3 yards. The defence is giving up 30.7 points a game and allowing close to 400 yards.

Buono, who plans to retire at the end of the season as the CFL’s most winning coach, said all the problems are fixable.

“My concern is we are not consistent,” he said. “We don’t transfer the stuff we do in the practice into the game.”

Burnham said the players are not ready to push the panic button.

“It’s a sense of urgency but at the same time, the feeling in the locker room, we’re not uptight, we’re not pressing desperately for a win,” he said.

“We’re loose, ready to just go play a football game. When it comes down to it, that’s when we are going to be out best. When we’re loose, going in excited, energetic.”