O’Leary: Retired Fantuz ready for the next stage in life

O’Leary: Retired Fantuz ready for the next stage in life

A month ago, Andy Fantuz was still somewhat on the fence about his career.

The 12-year CFL vet was a Grey Cup Champion and his 8,363 yards had him 18th all-time in receptions and fourth-most among Canadians. Whatever itch the 34-year-old from Chatham, Ont. felt to push his career forward faded on June 23, when another accomplished CFL vet fell to the ground in a game.

Fantuz was actually at a hospital that night with his wife, Amanda, who was getting to the any-day-now point of her pregnancy. She stood in the background of Fantuz’s press conference on Thursday night, holding three-week-old Abigail while Andy spoke.

“We were sort of getting toward this decision…when Ricky kind of went down a few weeks ago,” he said of Argos QB Ricky Ray.

It forced him to take stock of himself and his career. He was, all things considered, healthy, coming back last year from a torn ACL. He’d won, left his mark on the game and a new chapter in his life was about to start.

“We just looked at each other and we knew. This was it, this is going to be it.” 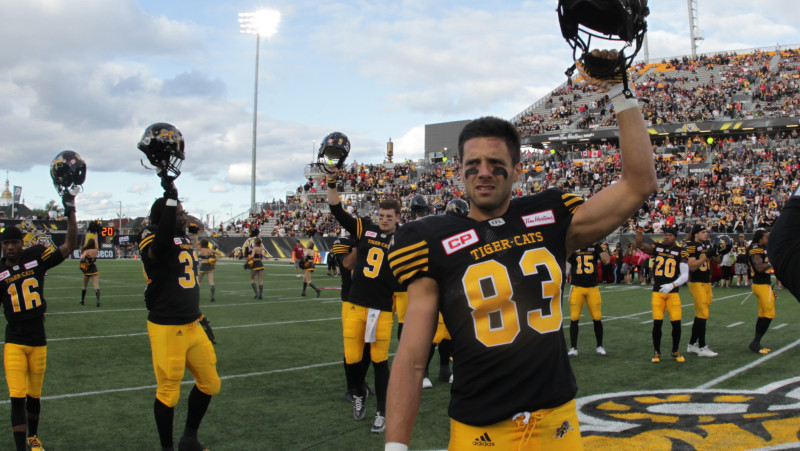 After 12 seasons, Andy Fantuz called an end to his prolific CFL career this week (David Chidley/CFL.ca)

Fantuz stood at the podium in the Ticats’ media centre for one last time and spent almost 20 minutes running back through one of the greatest careers a reciever — American or Canadian — has ever had in this league. That the Saskatchewan Roughriders — the team he played with from 2006 to 2011 — was playing the team he’d spent the past six seasons with on Thursday in Hamilton was too perfect to pass up. Wearing Ticats colours and the Grey Cup ring he won with Saskatchewan in 2007, he said his allegiances were with the home team, but that the game was a chance to say goodbye to both fanbases.

Then, it’s on to that future in front of him.

“First thing’s first, be a good dad. Be a better husband. Have more time with my family and friends,” he said.

“I don’t really know if I wanted to be away for the birth of my child. I don’t want to be on those road trips at the start of this new thing in my life, this new part of my life.

“After that decision was made, things happened naturally and organically and got me to this point where it was a decision we made together, clear-headed.”

He’s working in the health and fitness industry with young athletes, but wants football to be a part of his life. He worked briefly with the Ticats as player development coordinator while he rehabbed his ACL injury last year.

“I think I’ve been growing as a coach even when I was a player, throughout my whole career,” Fantuz said.

“I’ve always thought, learn as much as you can from the people around you and learn well enough so you can teach it. That’s kind of how I live my life, is to try to lead by example the best I can.

“That opportunity last year was great to step back and help the team grow. It’s something I would be interested in. Right now I’m enjoying these few months, kind of stepping back a little bit from the intense pro professional level, but who knows? In a week, a month, or a year that might change.”

He listed off many memories from his career, some just small moments in the huddle when a certain song came on, or the feeling of going through pre-game warmups. The Grey Cup win in 2007 with the Riders seemed like the most precious one to him.

“I think it was when Eric (Tillman, then the Riders GM and now the Ticats GM) came in, we kind of turned it around. We had a bad year my first year and then all of a sudden…we weren’t the strongest team throughout the year but we knew we had something special.

“That playoff run was so memorable. We had so many key matchups with Calgary, overtime games and then the Grey Cup itself was in Toronto, in front of my family and friends. To score the winning touchdown, was awesome.

“I have my ring here,” he said, holding it up while he spoke. “I cherish this thing. I cherish every person on that team and everyone who impacted that season. We had some great other years. My other four Grey Cup (appearances) were close but that’s a lesson for all of the young kids coming up: Don’t take it for granted. You’ve got to seize the moment.”

All of the moments of a 12-year career seized, Fantuz walked out from the dark media centre and into the brightness of the stands at Tim Horton’s Field with his daughter in his arms and his wife at his side. After 148 regular-season CFL games, Thursday night was his first as a fan.