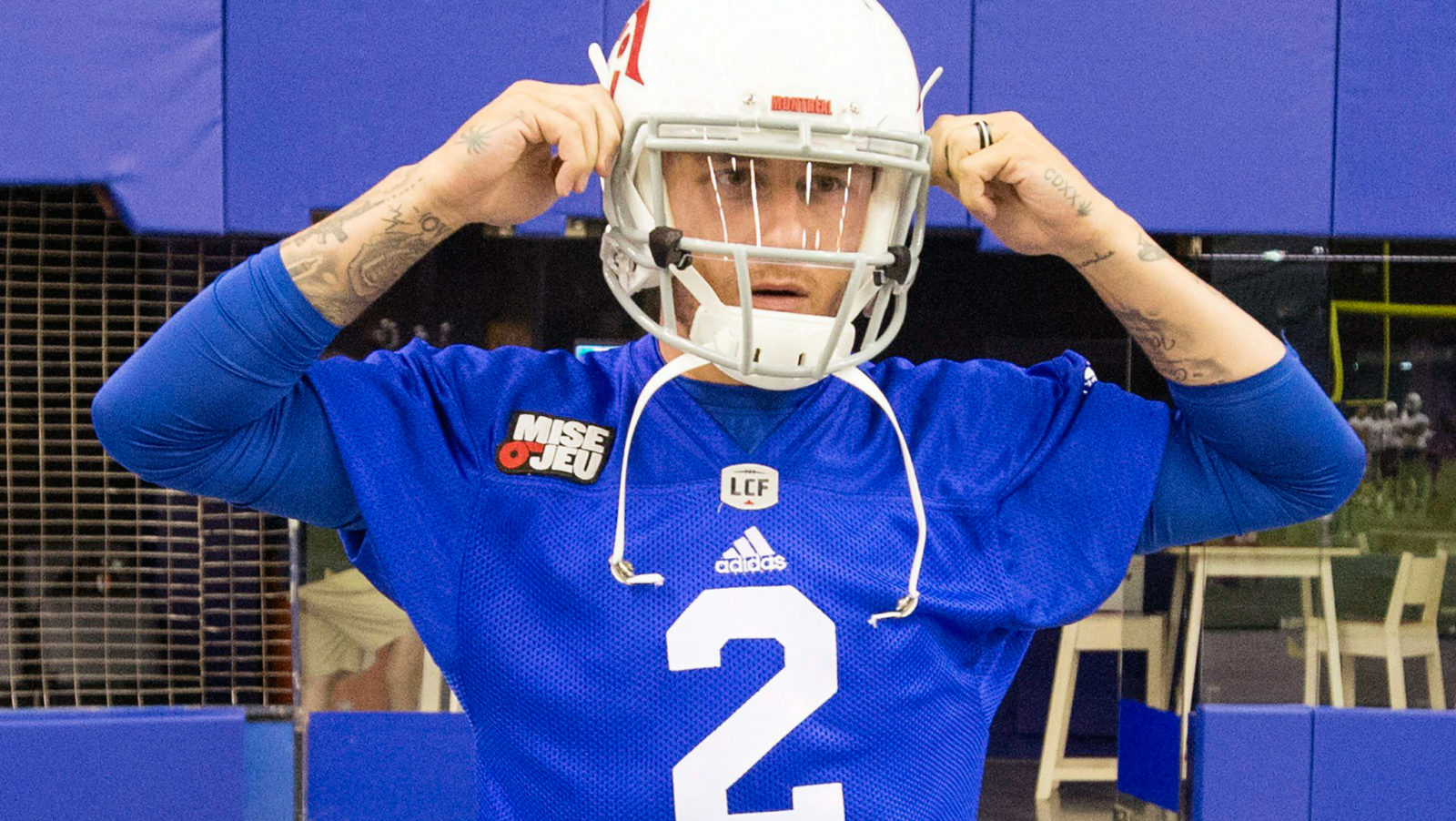 Johnny Manziel sat between his new head coach and his new general manager on Monday, in front of a new crowd of people in a new city and said all of the same things again.

Manziel didn’t need to change his message. He didn’t even ask for the change of scenery he’s gotten, being dealt to the Montreal Alouettes. The move could well mark the first time in CFL history that a player has been traded for two first-round picks in a single transaction.

History making/franchise altering deal aside, Manziel is the same guy he was at the end of May when he sat in similar circumstances in Hamilton, explaining what he was after.

“I was up at five in the morning and I got here at nine o’clock. It’s been a bit of a whirlwind, since last night,” Manziel said shortly after his first practice with the Als. The 25-year-old was back in a suit in the basement of Olympic Stadium, which felt like a world-class sauna on a thickly hot day in Montreal.

“I felt like throughout practice today I improved and learned a lot. As far my expectations and timetable moving forward, I trust these gentlemen to my right and left to put me in a position to succeed. I believe they know, evaluating football, what this team and this offence does. When I’m ready they’ll give me the chance. Until then I’m going to continue to come in and work like I need to work to catch up at a rapid pace.”

RELATED
» Manziel eager to build camaraderie with new team
» O’Leary: Trade opens playing time for Manziel
» Als acquire Manziel in blockbuster deal
» Sherman: ‘This has to work, and it will work’

There’s no question that Manziel will start in Montreal. It may not be this week — Matthew Shiltz took the vast majority of first-team reps on Monday, with Manziel squeezing in a play or two toward the end of practice — but it’s coming.

“We didn’t bring him here to have him sit on the bench,” said Als coach Mike Sherman, who helped recruit Manziel to Texas A&M when he was the school’s head coach.

Out from behind Jeremiah Masoli’s solidified starting position in Hamilton, Manziel still spoke of taking the same approach that he did in Hamilton.

“I’ve tempered my expectations to not reach too high. I want to come in and play solid football. That’s what I want to do and I realize that it is going to be a process,” he said.

“I have been away from the game for a little bit and I am excited to get some reps, whether that’s in practice or in a game, whatever the case may be. I know that’s a process. I know I’m going to be putting in the time off the field to expedite that process.”

He’ll say the same things, but he’ll do so in Montreal with the training wheels quickly coming off. Counting training camp, this marks Manziel’s 10th week in the CFL. The snaps he’s seen in this league have come in the pre-season, including a game against the Als in Montreal. He was 21-31 for 168 yards and a touchdown, rushing six times for 29 yards.

With Manziel holding a clipboard in Hamilton so far, Reed said he looked at what the QB did against his team in the pre-season as part of his evaluation.

“(Great players) elevate the play of everyone else on the team . . . How does that happen? I can’t answer that question. But there are certain people in sports and football in my career that have been able to do that, whether it’s a Brett Favre, a Reggie White or a Johnny Manziel.” 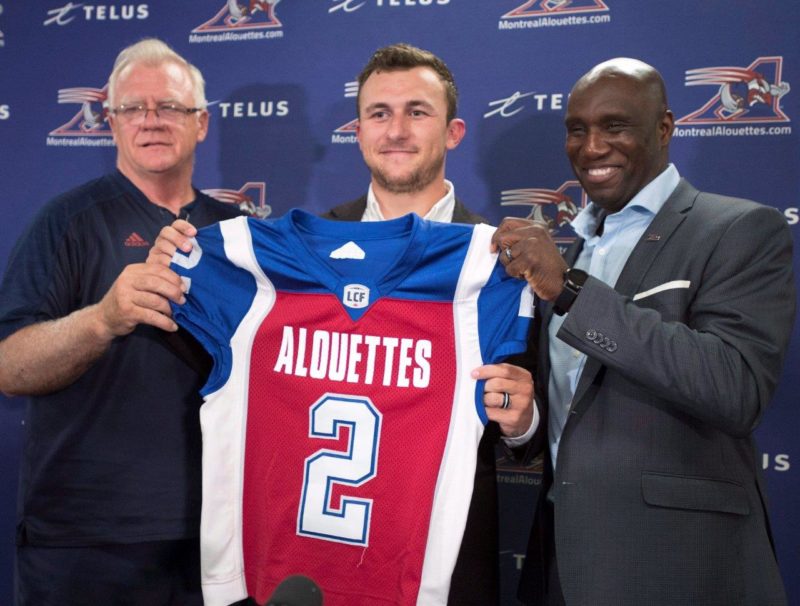 “Against us, we saw someone that threw the ball very well on the move,” Reed said.

“We saw someone that extended plays. We saw some decision making that we really liked. When he broke contain, he was still looking downfield to make the pass. Sometimes they want to impress you with their running ability versus being a quarterback on the move. That was something we were very impressed by.”

With his second team, Manziel arrives once again being lauded by his coach. June Jones heaped praise on Manziel before he was even officially a Ticat, telling The Waggle last December he thought Manziel could be the best player to ever set foot in the CFL. Sherman didn’t go that exact route, but he didn’t hold back either.

“I asked someone today, ‘How do you get that?’ Brett Favre had this as well. (Great players) make the people around them better. They play at their level. They elevate the play of everyone else on the team,” Sherman said.

“How do you do that, how does that happen? I can’t answer that question. But there are certain people in sports and football in my career that have been able to do that, whether it’s a Brett Favre, a Reggie White or a Johnny Manziel.”

Reed said in his opening statement that the team didn’t see Manziel as a saviour, just a piece of what they’re doing and where they want to take the team. As good as Manziel could be in this league, he’ll need help. Tony Washington and Landon Rice, the O-linemen that came with Manziel in the trade, will have to try to transform a line that has allowed a league-worst 17 sacks through five games. The offence has a league-worst 73 first downs; for context, Winnipeg leads the league with 141.

“We’ve had three quarterbacks in there and all three have knicks and bruises,” said Alouettes running back Tyrell Sutton, another person that could benefit from consistent o-line play.

“If we don’t protect these guys around here…nothing against (Manziel), I don’t think it’ll matter who we have back there if we can’t protect whoever it is.”

The questions about his past — the lack of commitment, the partying that spiked his NFL career, nights that ended with police sirens — stick with him and he knows he’ll continue to have to answer for it. There are personal demons and then just the uphill climb of trying to pull the Alouettes out of a three-year playoff drought in front of him. He seems like he’s ready for all of it, however hard it might be.

“That will follow me for the rest of my career, whether I’m sitting here at 25-years old or 35-years old, whatever the case may be,” he said.

“My past mistakes and transgressions will follow me whether it’s Montreal or any of the other teams in this league. I heard when I got to Hamilton that it was too close to Toronto and they’ll never find me.

“At the end of the day I’m about my business and I’m about being a professional football player. I’ve made mistakes in the past and I know for a fact that I’m not going to let that continue going forward. I’m focused on what I’m doing.

“These guys, this organization, has obviously put a lot on the line to get me here. I expect to come in here and act like a professional and do what I need to do to give this thing as best a chance as possible to be a good football player. That’s what I want to do.”