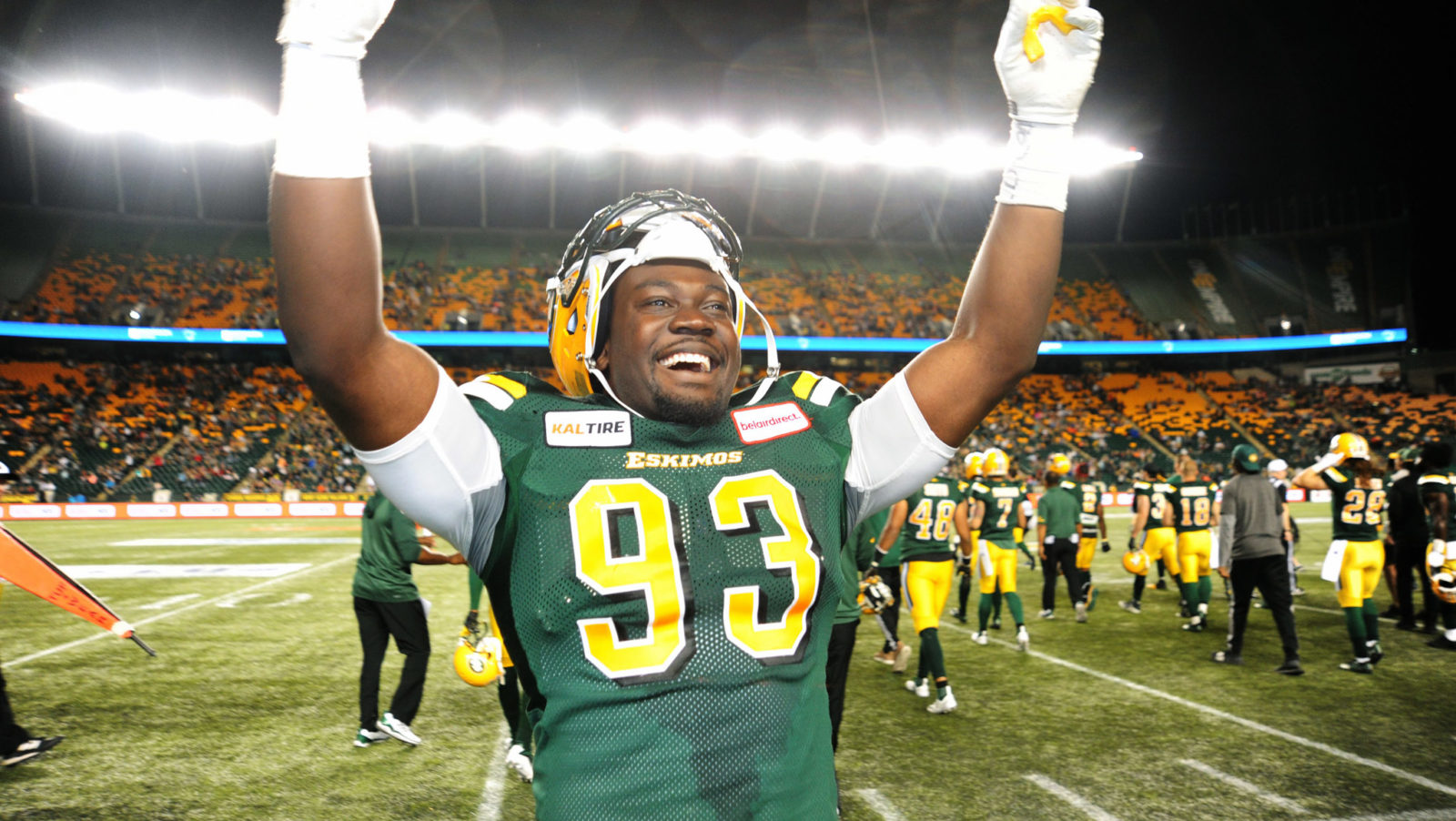 Had things gone a little differently back during his high school days, Kwaku Boateng might be hauling in passes for the Edmonton Eskimos, instead of hauling down quarterbacks.

Turns out, though, what made him a bit of a liability on offence made him a star on defence and the 23-year-old from Milton, Ontario, is parlaying that quality into emergence as a premier CFL defensive end.

“They said I was too aggressive on offence,” laughs Boateng, recounting what his coaches told him when they converted him to defence after his first year of high school ball.

“At first I was kind of mad about that.”

RELATED:
» Bio: Kwaku Boateng by the numbers
» Get Tickets: Roughriders at Eskimos
» Watch: Esks riding momentum with Riders on horizon 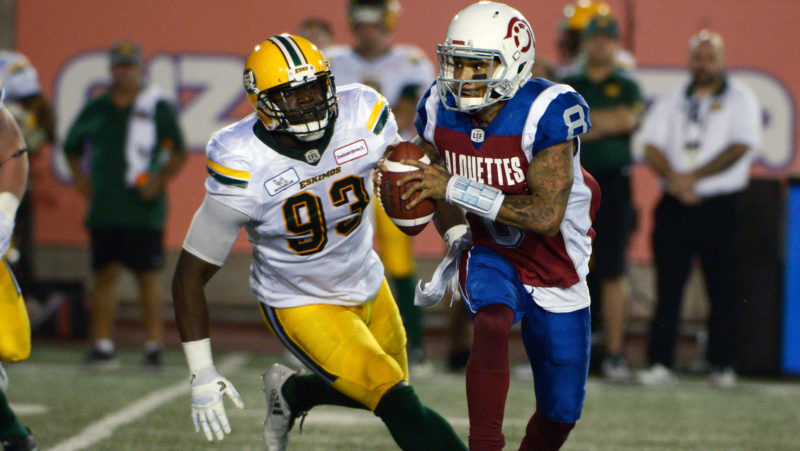 Now Boateng is emerging as a defensive force, his altered football destiny first charting a course for university success, and now one that sees his heightening status in the Canadian Football League as a disruptor of the passing game, not as a contributor to it.

“We ran the ball a lot in high school,” says Boateng, explaining why he was flipped from receiver to defensive end as a teenager. “It was my blocking. I didn’t know how to position myself. Blocking-wise, I’d be very aggressive. They (his coaches) just felt like I would be more effective playing defence, which is very true.”

Kwaku Boateng (pronounced QUAKE-ooh BOA-teng) is enjoying a breakout sophomore season (one small injury aside), employing the lessons he’s taken from teammates during his rookie season, following the lead of his unit’s esteemed leader, and climbing the charts among CFL defensive ends as the Eskimos look to do the same in the West Division standings. The sun is rising on what many agree could be a dominating career.

With five sacks in four starts – putting him second on the list behind Saskatchewan sack master Charleston Hughes (8) – Boateng’s abilities might well keep him within sight of the sacking elite as the season progresses. “He should get ten, twelve, to thirteen sacks this year,” says Edmonton Defensive Line Coach Demetrious Maxie, so long as the entirety of that Eskies’ line continues to improve.

Included in Boateng’s tally of five takedowns is last week’s hat trick in Montreal, where he got to Alouettes’ quarterback Vernon Adams on a continual basis, despite it being his first game back after missing two with a hamstring tweak. “I’d be lying if I said I game-planned to get three sacks,” says Boateng. “I game plan to get at least one, but, I’m very grateful to get three.”

The Wilfred Laurier grad – he completed his Bachelor’s in Business Administration in the spring – has grown into his role this season, one that was made bigger when the Eskimos parted ways with a foursome of veteran defensive ends during the winter; Odell Willis was traded to Ottawa, who flipped him to the BC Lions. Phillip Hunt and Marcus Howard were both released and John Chick announced his retirement. After a rookie season of rotating in and soaking up the pro game, Boateng had a shot to win a starter’s job and he has not disappointed.

Having those four veteran quarterback hunters in his midst during his rookie year was a boon to Boateng, who credits them all with helping him become a better player. Asked what, specifically, comes to mind when he thinks about those lessons, Boateng offers up two things; one from Willis, one from Hunt.

If Willis’ contribution to the education of Boateng came between the ears, Hunt’s was one of physicality, and when you see Boateng get ready for a snap by putting both hands on the ground and elevating his butt, that’s all Hunt.

“I stole that,” Boateng says joyfully, and you’d have to think that Hunt would approve, imitation being the sincerest form of flattery and all. “I watched him throughout all of training camp and throughout the whole season so that I could imitate that and perfect that myself.”

“I feel like I’m a lot more explosive off the ball and I’m low and agile and able to keep my leverage,” he says of the adjustment in technique.

Maxie, who knows a thing or two about demolishing the ambitions of a passing play after collecting 70 sacks over the course of his thirteen-year CFL career, is in his first season as D-Line Coach for the Eskimos. What he’s noticed about Boateng is that he has the ability to coordinate his movements very well and very quickly and that, of course, is crucial in creating an advantage over an opposing offensive lineman.

“He’s very explosive and he uses his hands well,” says Maxie, noting that it is not always easy for defensive linemen to pair good footwork with good upper body moves. Sometimes it’s much more one than the other.

“He does what you ask him to do,” continues Maxie, praising Boateng’s willingness to soak in information. “He’s a heck of a listener, he’s a heck of a teammate.”

“Coming into this year he evolved as a pro football player. Last year was his coming out party. He had four sacks last year, now he has five.
I told him he’s gonna triple that amount. If he sticks to believing what I say to him, he’s gonna get it done. If he uses his great athletic ability, it’s gonna happen.” 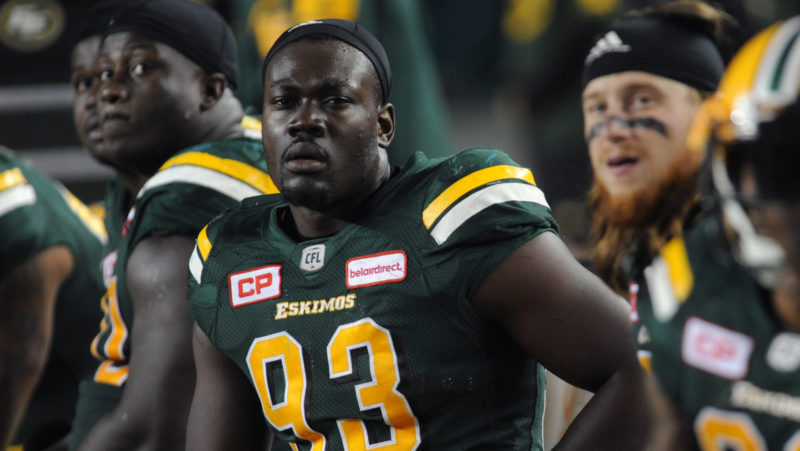 Boateng has already collected one more sack in four games this year (five) than his 2018 season total (four) (Walter Tychnowicz/CFL.ca)

The Eskimos’ defensive line has undergone a great shift this season, with the four veterans mentioned, as well as another – defensive tackle Euclid Cummings – departing. There is Boateng at one end and free agent signing Alex Bazzie, an established vet over four seasons in BC, at the other. Jake Ceresna, obtained in the deal that sent Willis to Ottawa, is starting at tackle in his second year as a pro.

Then there is the big daddy of the Edmonton defensive line, tackle Almondo Sewell, in his eighth season as an Eskimo.

As you would expect, Sewell is playing a major role in gluing it all together, assisting Boateng with his 2018 maiden starter’s voyage.

“Almondo Sewell, he’s really my big brother in the locker room,” says Boateng. “He helps me get it. Get the game. He teaches me how to be a pro.”

“It goes beyond him just getting sacks,” he adds. “He keeps everyone accountable. He has a high standard. When he says something, people listen. And he’s a team player. He’s not someone that’s selfish. He’s someone that wants to help you out.”

As a unit, the Eskimos’ defensive front seven has work to do in shutting down the run game. The team has given up an average of 130 ground yards per game, with opponents averaging 5.8 yards per carry. Both of those numbers rank them second-worst in the CFL.

On the pass defence side of the equation, things are much brighter; The Eskies have yielded 240 yards per game and that ranks them third best.
Led by Boateng’s total of five, Edmonton has amassed 17 sacks, tied with Calgary and Winnipeg for the league lead.

“I’m starting to feel like I’m ready for this league and that I’m starting to understand the game,” he says, although he does add that the nervousness that would come to visit him in a robust way prior to every game during his rookie season is still there, only less so as Boateng adjusts to life as a starter. While the nerves fade away, the burden of responsibility increases. It’s something Boateng is very much aware of, and very much embracing.

“Maybe it’s just me, personally,” he begins, “but I feel like there’s more stress now just because, obviously, the starting role is a huge deal and it shows how much confidence and how much respect the coaching staff here has for me.”

“And, Really, I just don’t want to disappoint them.”

Disappointing football people is not something Kwaku Boateng has done much of, if at all, since that day back in grade ten when his football trajectory was altered.

“I’m fighting to be great, each and every day,” he says, before appreciatively adding:

“And I’m very thankful that I’m getting this opportunity so early in my career.”

Gratitude is sometimes a two-way street. Right now, the Edmonton Eskimos must be grateful, too, that a decade ago a group of high school coaches figured Kwaku Boateng might be able to play a little defence.