In an era of systemic racism, Bright found acceptance in Canada

In an era of systemic racism, Bright found acceptance in Canada

At 21-years old, Johnny Bright stood on the field at Oklahoma A&M, about to become a part of history. It was Oct. 20, 1951 and Bright, playing for the Drake University Bulldogs, was a rarity at that time as a black quarterback.

His years at Drake were far from easy, playing a high-profile position when the United States was still a few years away from repealing segregated public education facilities. Things that seem simple today, like hotel accommodations, weren’t always guaranteed when the team travelled. Sometimes the fallback plan of the host school’s dorms being offered up couldn’t always be counted on.

Bright, a Heisman candidate that year, took to the field and history unfolded. He was targeted on the first play of the game, taking a forearm to the jaw after he’d handed off the ball. The bone was broken. Incredibly, he stayed in the game, throwing a touchdown pass on Drake’s next possession. The same player, defensive tackle Wilbanks Smith, hit him with another cheap shot. Bright’s day was done and his jaw would be wired shut.

The horrible sequence was caught on film by the Des Moines Register. The photos won a Pulitzer Prize.

“I think my Dad gained strength from that,” Kandis Bright said over the phone from Edmonton.

“He was the type of person that wasn’t going to let anything stop him from getting to where he wanted to be. He was even like that at home. ‘I want to do this, I want to pursue it and see what happens.’”

The broken jaw essentially ended his college career with three games remaining, but Bright was far from finished with football. The Philadelphia Eagles took him with the fifth-overall pick of the 1952 NFL draft, but Bright chose to instead play in Canada. 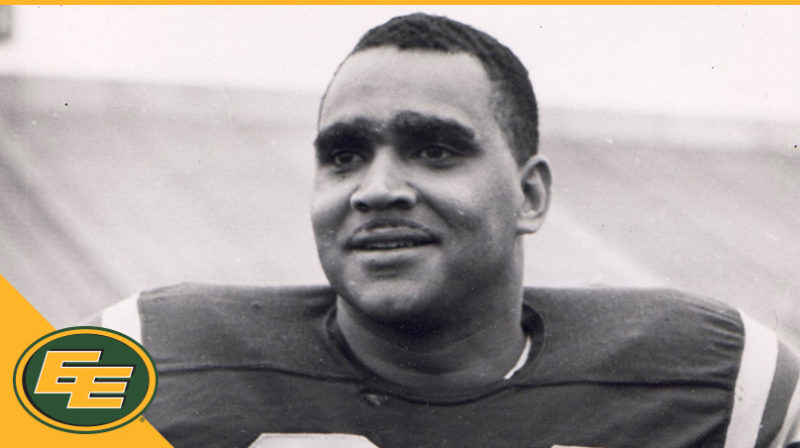 He spent his first two years with Calgary and was traded to Edmonton during the 1954 season. He’d stay with the Eskimos for 10 years, playing on both sides of the ball initially before becoming a hall of fame player as a running back. In 1959, Bright was the first African-American to win the CFL’s Most Outstanding Player award.

In Canada and in Edmonton in particular, Bright found acceptance.

After football, he kept his family in Edmonton and transitioned into a teaching career with the Edmonton Public School Board. Bright coached football at Bonnie Doon High School throughout the 1960s. Upon his death in 1983 he was the principal at D.S. Mackenzie Junior High.

“I remember him saying that the NFL was trying to get him to come back but he had said that he’d made Canada his home,” Kandis said. “When they tried to call him back there was still a lot of racism in the U.S. with black football players and I don’t think he really wanted to deal with that. He was accepted here in Canada and he made Canada home.”

She said that her father didn’t speak a lot about the things he encountered in the States in his youth, especially what came to be known as The Johnny Bright Incident. Bright passed away in 1983, during a complication from a knee surgery in Edmonton. A&M — now known as Oklahoma State University — apologized to Drake University in 2006 for what Bright endured. In the same year, Drake University remodelled its field and named it after Bright.

“My sister and I went to Drake University in 2006 and they’d dedicated the football field to my father,” Kandis said. “At that time we found out the real gist of everything that happened. My Dad never talked about it at home. That was our first real enlightenment of what happened.”

The trip showed a side to their father that the sisters hadn’t fully known.

“What do you say? You just…I think about my Dad and what he’d gone through to get to where he got,” Kandis said. “I think in my position, I just looked at it and we said, ‘That’s how our father came to be our father.’ He just took it, learned from it and went with it.”

Having grown up in Edmonton, Kandis remembers her father enjoying the life that he built in Canada. She remembers his playful sense of humour, of him being her principal in junior high and having him occasionally call her to his office to see if she wanted to have lunch with him. She tells a great story of him getting a new propane BBQ, assembling it incorrectly and having to call the fire department when it blew up. Classic Dad stuff.

After years of accolades that included the Canadian Football Hall of Fame (1970) and the College Football Hall of Fame, his number going into the Esks wall of honour (1983) and of course Drake University naming its field after him, Bright received an incredibly fitting tribute to his legacy. Johnny Bright School, a K-9 school in Edmonton’s Rutherford neighbourhood, opened in September, 2010.

The school’s song pays tribute to Bright and perhaps most fitting to his life and his journey to Canada has the line: We can all become who we want to be.