Ibrahim ‘Obby’ Khan remembers the moment from his rookie season in the CFL perfectly.

He was the second overall pick in the 2004 CFL draft, an offensive lineman out of Simon Fraser University, playing for his hometown Renegades. He’d just finished rookie camp and was out for a night with his teammates. As they were getting to know each other, they noticed that Khan wasn’t drinking.

“It was a curiosity thing as opposed to, ‘Why are you different? Why don’t you do this?’ It was genuine curiosity with those guys,” Khan recalled.

Over the course of his nine-year career, it would be the first of many of these conversations. A first-generation Canadian of Pakistani descent, Khan was often the only East Indian player on his team in his time playing football. He was also very often the only Muslim on the team, too.

“When I fast forward to my last year in Calgary it was the exact same thing in the locker room,” he said, recalling answering questions from teammates there. Kevin Glenn, whom Khan knew well from their time in Winnipeg, heard Khan get some of the same questions in Calgary and was able to answer for him.

Everywhere Khan would go in the CFL he’d be asked questions about his faith and his background. As a successful entrepreneur in Winnipeg, constantly looking to grow his Shawarma Khan and Green Carrot businesses, he still gets those questions. He welcomes them.

“I love being a platform or a vessel to share, discuss, educate (people on) my faith and my culture. I think it’s fantastic. 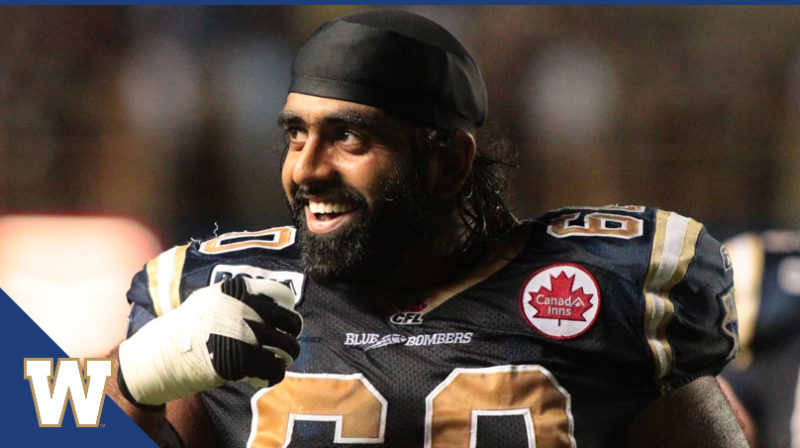 When Khan played, the dialogue would often start in training camp, which would overlap with Ramadan. Khan would fast from sunup to sundown and his teammates would immediately see the sacrifice he was making.

“In the locker room it was really just genuine curiosity. What Islam was, what being a Muslim was, what is fasting, why don’t we drink, why do we pray five times a day?” he said.

Regardless of the city he played in, Khan found his teammates to be perhaps curious about him, but always welcoming.

“The fabric of the CFL was just awesome. it’s a melting pot, really,” he said.

“You have Americans coming up, you have Canadians, Canadians that played in the States. You’ve got guys from all different positions, all different backgrounds.

He acknowledges that his perspective may be a little skewed, given that he stands out (“I’m six-four and 270 pounds now. I’ve lost a little weight,” he jokes), as a longtime prominent member of his community. But while hostility toward Muslims has increased, Khan said he feels like Canada as a whole has grown more sympathetic.

He came to the Bombers in 2006 as part of the Ottawa Renegades dispersal draft and knew within a year that he wanted to stay in Winnipeg and make it his home. He opened his first restaurant, Shawarma Khan, in January, 2013. He now has two standalone locations in Winnipeg, along with a 50-foot banner over the south side end zone at Investors Group Field.

Looking at the end zone and watching Bombers fans line up for Shawarma feels like a full circle moment for Khan. The days of sitting in the locker room and talking about who he is and where he’s from are gone, but he’s managed to take that idea into his post-playing, professional life.

“People are walking around a game in the Canadian Football League eating a Shawarma. If that isn’t strength in diversity, then I don’t know what is.”