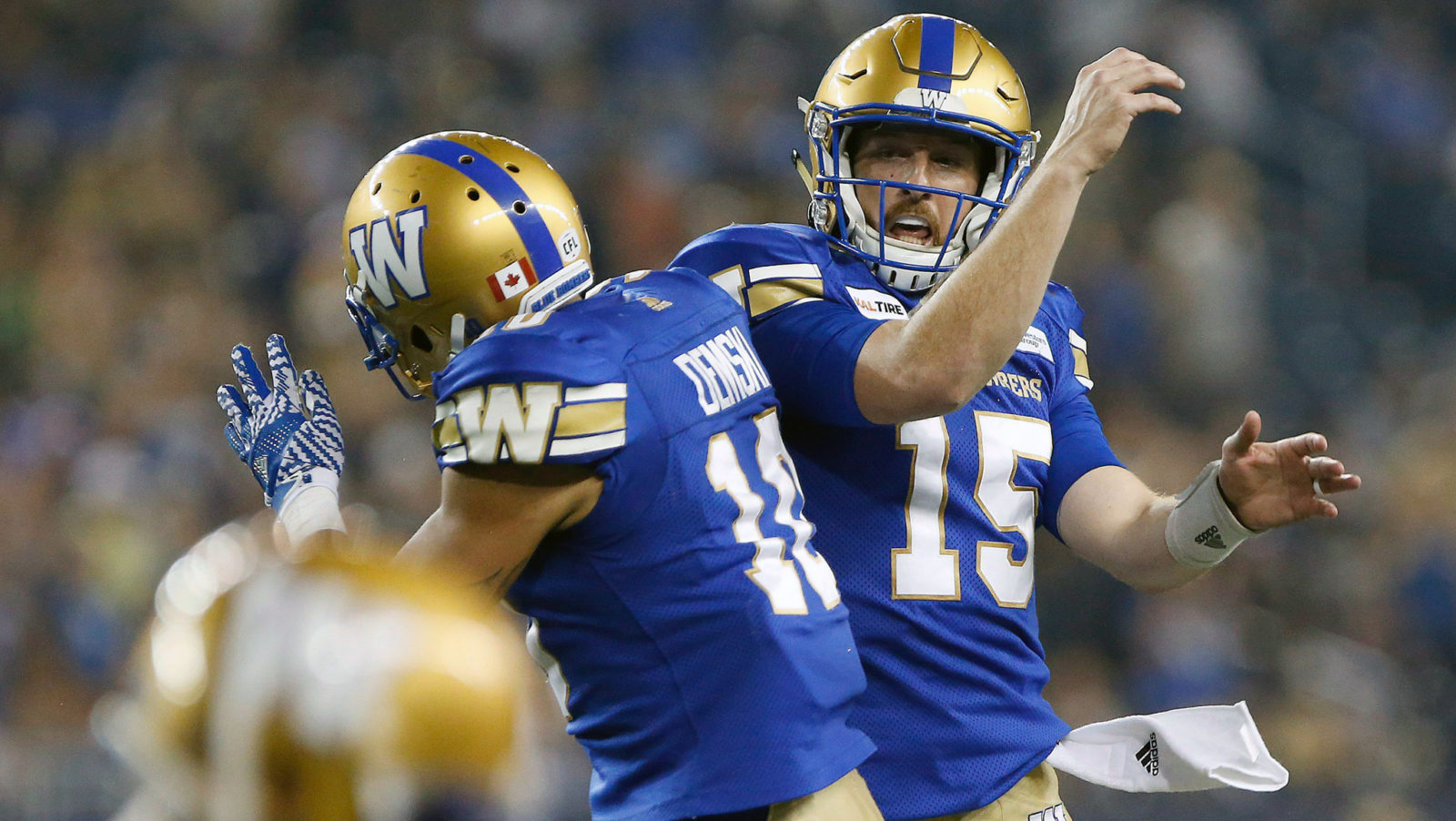 TORONTO — The power struggle continues near the top of the Nissan Titan Power Rankings, led by a trio of 5-3 teams.

The Edmonton Eskimos, Winnipeg Blue Bombers and Ottawa REDBLACKS are all in the same boat through nine weeks of the CFL season, with no clear front-runner for the No. 2 spot.

No team is scoring more points than the Bombers, who have leaned on the dominant rushing attack of Andrew Harris and a league-leading 25 takeaways on the way to three straight victories.

The Eskimos are led by the reigning Most Outstanding Player in Mike Reilly, who’s on pace for 52 combined touchdowns and on his way to another prolific season.

Then there are the Ottawa REDBLACKS, who rolled up 587 offensive yards in a win over the Montreal Alouettes, led by a red-hot Trevor Harris.

How does it all shake up, and can anyone push the undefeated Calgary Stampeders?

It’s Week 10 and the Stamps are allowing only 12.3 points per game, nearly 10 points fewer than second-place Winnipeg. With four upcoming games against West Division opponents, the toughest stretch of the season starts Sunday with a visit to Regina to take on the Riders.

Despite a decisive edge in offensive output, the Eskimos fell to the rival BC Lions in Week 9. In the big picture the Esks still have a good shot at second in the West, but there’s little room for error. Only two games separate second place from fifth in the highly-competitive West.

The Bombers continue to steamroll East Division opponents, taming the Ticats in Week 9 for their third straight victory. Mike O’Shea’s team has an impressive formula of taking the football away and making opponents pay, leading the CFL in points (33.5), takeaways (25) and points off turnovers (78).

Trevor Harris has thrown for 868 yards the last two games, the highest back-to-back total since Darian Durant‘s 918 yards back in 2010. The offence is heating up; now the REDBLACKS just need to limit the mistakes (they turned the ball over six times vs. Montreal) to prove they can rise up and own the East Division.

It can’t be said enough: The Lions are a different team when Travis Lulay is behind centre. Lulay is putting himself back in the elite quarterback conversation, showing flashes of the 2011 Most Outstanding Player. Mark Washington’s defence has also been impressive as the Lions are scratching back following a slow start.

The Riders drop two spots without even playing in Week 9. Maybe the decision to release Duron Carter ends up helping, but for now the club has just parted ways with its biggest star and most talented and versatile player. With undefeated Calgary on tap, Chris Jones’ team is in danger of falling below sea level in the West.

You’ve probably heard this before, but despite owning the league’s second-best offence and third-stingiest defence, the Ticats still can’t figure it out on the scoreboard, dropping to 3-5 after losing in Winnipeg. June Jones has a few kinks to work out, but the Tabbies are not far off from being very, very good.

The Argos will go as far as sophomore quarterback McLeod Bethel-Thompson can take them. The 30-year-old pivot is looking to replicate his first career start, in which he threw four second-half touchdown passes and led the Argos back from 24 points down. Anthony Coombs and Bear Woods would be welcome mid-season additions.

The Alouettes fought tooth and nail with the East-leading REDBLACKS, leading throughout most of the contest before giving up the go-ahead touchdown with under a minute remaining. The six takeaways were a welcome sight, as was the improved play of Johnny Manziel in his second career start — positives that can’t be overlooked.