Which touchdown celebration was best through Week 9?

Which touchdown celebration was best through Week 9?

Kamar Jorden’s Fortnite dance was close to dethroning the Winnipeg Blue Bombers’ Hippo celebration but Andrew Harris and co. came away with the victory.

53 per cent of you voted for The Hippo this week while 45 liked Jorden’s Fortnite and just two per cent thought Diontae Spencer’s In My Feelings challenge was the best. 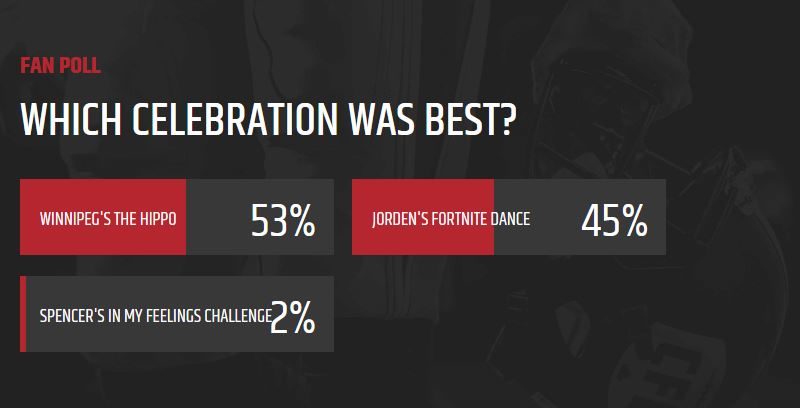 Once again, there will be two challengers going up against The Hippo – the BC Lions selfie and Nic Demski’s page-turner.

Let’s first get a reminder of The Hippo (although at this point, I’m sure you all remember).

At the start of the second quarter against the BC Lions, the Bombers were on the BC four yard line. Andrew Harris took the direct snap on first down and rumbled into the end zone where he began the celebration and his teammates joined in. And so, The Hippo was born.

Now for Kevin Elliott and the BC Lions selfie.

The Lions were down 20-10 in the third quarter. On second-and-five, Lulay tossed a dart to Kevin Elliott, his favourite target on the night, who ran five yards into the end zone for the score.

And then my favourite celly of the season happened (mostly because I’ve been dubbed the #SelfieQueen by a former-member of my team at CFL HQ – yes, I’m looking at you, Max.)

.@TravisLulay and the @BCLions start the second half strong, as Lulay hooks up with Kevin Elliott (@CatchinMyDreams) for the 9-yard touchdown to bring B.C. to within three.

Elliott waves over his teammates, lifts up the ball as a camera and snaps a selfie. I. Love. It.

And now for Demski.

The Bombers were ahead of the Ticats 19-10 in the third quarter. Matt Nichols aired it out to Demski who rolled into the end zone for six.

Instead of running up the stairs to celebrate with fans like he did the week before, Demski ran over to the Manitoba Bisons logo that was on the field, knelt down and pretended to flip the book’s pages.

Winnipeg product Nic Demski (@Demski9) pulls in the 34-yard touchdown from @MattNichols16 to put the @Wpg_BlueBombers up 25-10 over the #Ticats!#CFLGameDay #FNF pic.twitter.com/smunSaR8JX

🤔thought this @demski9 celly looked familiar…..volume ⬆️ nothing but ❤️ for his Bisons! #demski #manitobamobbin pic.twitter.com/cgs6tx1Rds

Now it’s up to you, CFL fans. Which touchdown celly reigns supreme after Week 9? Demski’s page-turner? Elliott’s selfie? Or the Bombers Hippo? Have your say below!