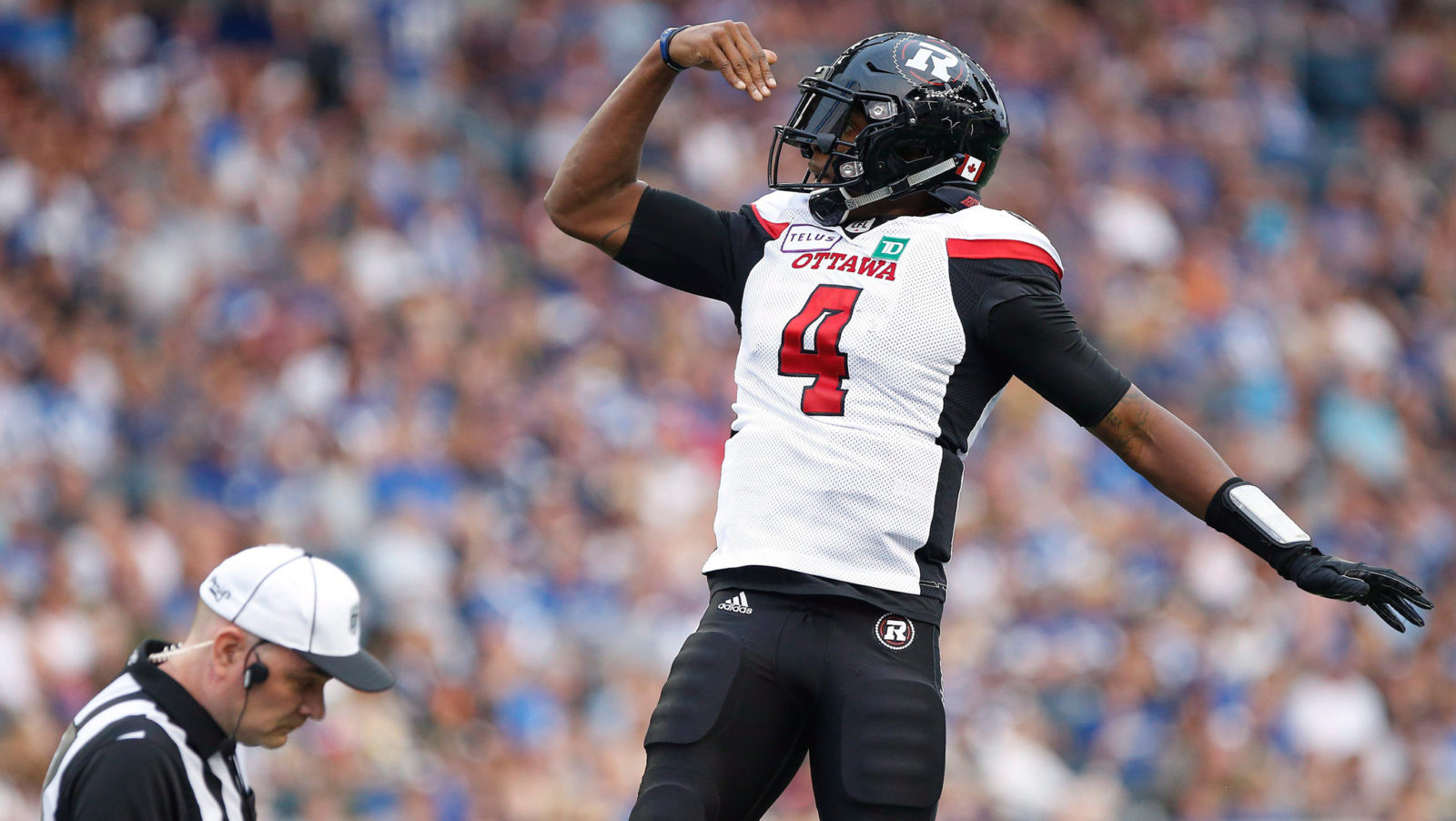 The REDBLACKS were firing on all cylinders on the warm Winnipeg night, scoring on offence and defence on route to their second-straight win. Trevor Harris – who threw for 361 yards and completed 29 of 39 passes – spread the ball around to six different receivers, including Dominique Rhymes, who scored his first CFL touchdown.

Greg Ellingson had another big night for the REDBLACKS, hauling in 100 yards on eight catches. William Powell also hit the 100-yard mark, rushing 18 times for 106 yards and a touchdown.

On defence, Avery Williams scooped up a Matt Nichols fumble and ran it to the house for the major score while as a unit the defence held the Bombers to six two-and-outs on the evening and no points in the second quarter.

For the Bombers, Darvin Adams scored twice and collected 162 yards receiving while Andrew Harris continued his success in 2018, finding the end zone on a direct snap in the third quarter. Nichols finished the night connecting on 23 of 35 passes for 291 yards, two touchdowns and an interception.

Ottawa opened the scoring on Friday night as Davis scored on a quarterback sneak to cap a 10-play, 66-yard drive for the visitors. Harris connected with Ellingson on the two-point convert and the REDBLACKS took a 8-0 lead mid-way through the first quarter.

After a two-and-out on their first drive, the Bombers found their groove on the team’s second possession of the ball game. Winnipeg marched down the field and Nichols aired it out to Darvin Adams, who scored the home team’s opening touchdown to cap a seven-play, 71-yard drive. Justin Medlock was good on his convert kick after the 45-yard score and the Bombers cut the REDBLACKS lead to 8-7.

Maurice Leggett recovered a Harris fumble on the REDBLACKS’ next drive, after the Ottawa pivot called his own number on second-and-10, bringing the Bombers offence right back onto the field. Winnipeg couldn’t take advantage of the turnover, however, as the Ottawa defence stood tall and forced the Bombers to punt.

Davis scored his second touchdown of the contest early in the second quarter to extend the REDBLACKS lead. The one-yard score finished off a 12-play, 75-yard drive. Ottawa had a second attempt on a two-point convert – an offside call on the Bombers defence negated the first try – and Harris tossed to Diontae Spencer, who trotted into the end zone untouched to give Ottawa a 16-7 lead.

Lewis Ward kicked his first field goal of the contest, splitting the uprights from 41-yards out with about four minutes left in the first half. The three-point score gave the REDBLACKS a 19-7 lead as the Bombers headed back on the field looking to respond before heading to the locker room.

After a two-and-out for Winnipeg, Harris and the REDBLACKS kept the momentum rolling as time ticked off the clock late in the second quarter. They moved into field goal range – a drive that included a 26-yard catch from Ellingson –  and Ward made his 38-yard attempt to add to Ottawa’s lead (22-7).

After the first half, Ottawa’s defence held the Bombers to four two-and-outs and off the score sheet completely in the second quarter. Harris and the REDBLACKS offence was also much more effective than Nichols and his Bombers in the first half – Ottawa’s pivot threw 241 yards in the first 30 minutes while Winnipeg’s had just 84.

Andrew Harris scored the Bombers second major of the contest midway through the third quarter. It was a direct snap to Winnipeg’s tailback who then dashed 13 yards and stretched out for the score to cap the eight-play, 54-yard drive. After Medlock’s completed convert, the Bombers cut Ottawa’s lead to 22-14.

The REDBLACKS responded to Winnipeg’s touchdown with one of their own. Dominique Rhymes scored his first CFL touchdown, after Harris tossed a 59-yard strike to Rhymes to get into scoring position. Ottawa’s two-point convert was repeated after a roughing the passer penalty was called on the Bombers defence and William Powell shoved his way into the end zone. The five-yard score put the REDBLACKS up 30-14 with under five minutes left in the third quarter.

Ottawa kept their foot on the gas, as Corey Tindal forced Nichols to fumble the ball on the first play of the Bombers very next drive. Avery Williams scooped it up and ran it to the house for the score. Powell scored his second two-point convert of the evening, darting into the end zone and the REDBLACKS silenced the Winnipeg faithful at Investors Group Field with a commanding 38-14 lead.

Adams scored his second touchdown of the game on the very first play from scrimmage to start the fourth quarter. The 72-yard score, coupled with Medlock’s point after, cut Ottawa’s lead to 38-21.

Powell added another major score for the visitors, a 28-yard run, with just over seven minutes left in the contest. Ward missed the point after and Ottawa held a 44-21 lead over Winnipeg.

That would be the final scoring play for either team as the REDBLACKS snapped Winnipeg’s three-game winning streak.

The Bombers head to Calgary to take on the Stampeders next week while Ottawa heads out on a Week 11 bye.