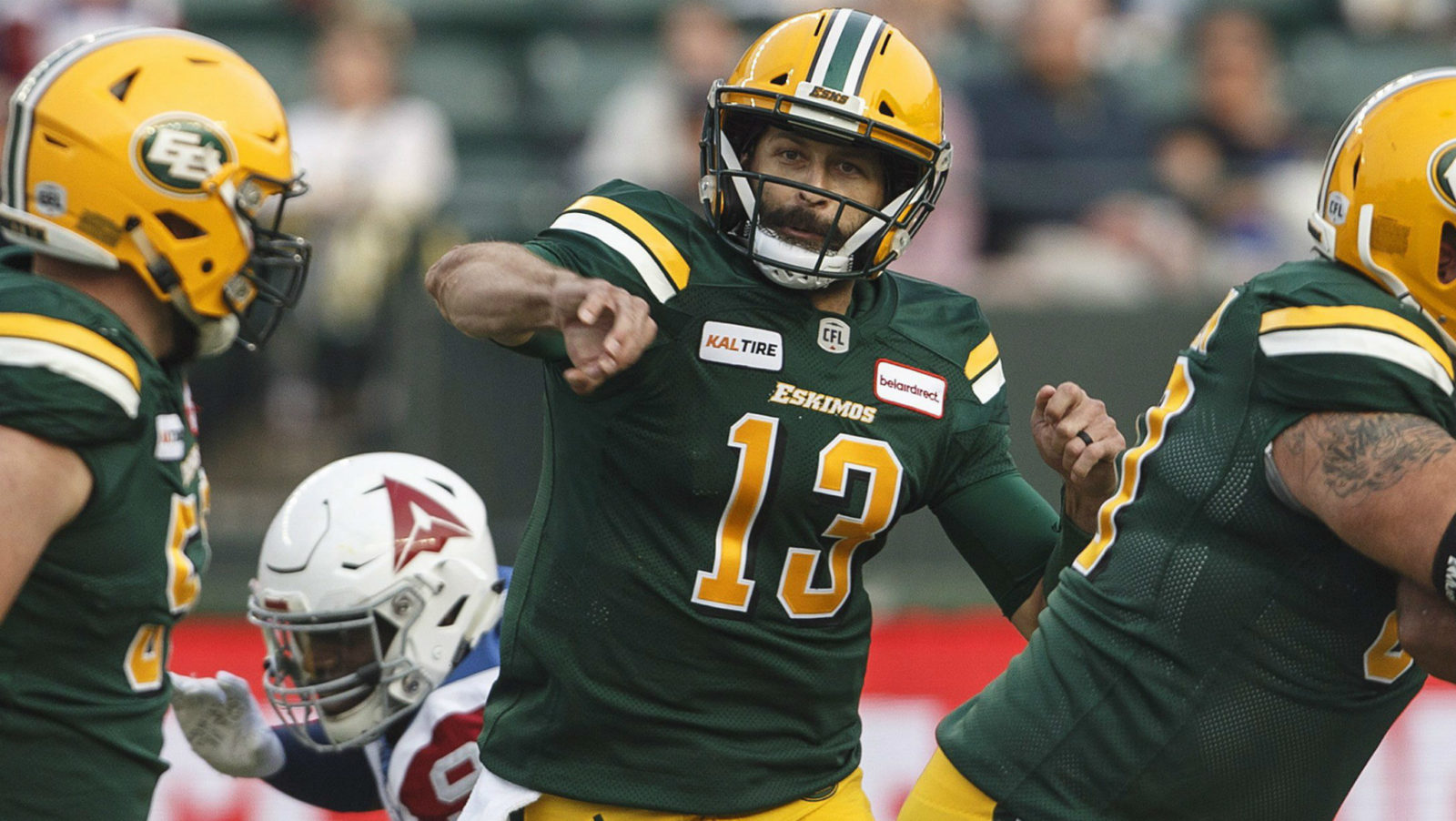 “First 30 minutes, we came out swinging. I thought the guys executed great, guys were making plays all over the field,” Reilly told TSN’s Farhan Lalji following the game.

In the first half alone, Reilly had amassed 290 passing yards and only a few incomplete passes as he completed the first two quarters completing 88.5 per cent of his passes, while also adding three touchdowns.

» Images: Alouettes at Eskimos
» By the Numbers: View Boxscore
» Reilly passes for 400 yards in 40-24 win over Alouettes

However, although he had a stellar performance through the air on Saturday, the Eskimos’ offensive line had a tough time handling the Alouettes pass rush, coughing up a total of five sacks.

“Credit to Montreal. They dialled up the pressure a little bit at the end of the second quarter, and that continued on, really, for the rest of the game,” said Reilly. “Our guys did a good job at picking it up and putting points on the board, but they were a little harder to come by than they were in the first half.”

By the time the final whistle blew, and the victory was sealed for the Eskimos, Reilly had completed 32 of his 42 pass attempts for 424 passing yards, three touchdowns and a rushing touchdown of his own.

Perhaps one of his more unorthodox passing touchdowns came on his last major, which came in the first half facing a face full of charging Alouettes defensive linemen.

Facing second and 13 with under three minutes remaining in the second quarter, Reilly and the Eskimos found themselves in the red zone yet again. The Alouettes elected to rush seven defencemen. Henoc Muamba came steaming through the offensive line untouched as he bolted towards Reilly, who, off his back foot, desperately attempted to get the pass off.

A pass that had more hang time than some punts.

Nonetheless, the end result of all that was the ball finding its way nestled in the hands of Esks’ receiver Bryant Mitchell in the end zone, who came completely out of nowhere to make the play.

“Hey man, that’s how we practice it every week,” Reilly joked after the game. “I promise I meant to throw it like that.”

The reception capped off a career half of play for Mitchell, who tallied six receptions for 111 yards. He’d make one more reception in the second half to bring his yardage total to 128.

The victory comes a few days before Reilly and his wife are expecting the delivery of their second daughter.

“It’s going to be nice for the next two days to focus on family,” Reilly mentioned after the game. “Super excited to welcome another little girl into this world. It’ll be short lived though as we go back to work on Monday evening, and we’ve got a short week before heading out to Hamilton.”

The Eskimos kick off Week 11 of the CFL schedule in Hamilton when they take on the Ticats on Thursday, August 23. Kick off is scheduled for 7:30 p.m. ET.