HOF Profile: Cosentino played and wrote his way into history 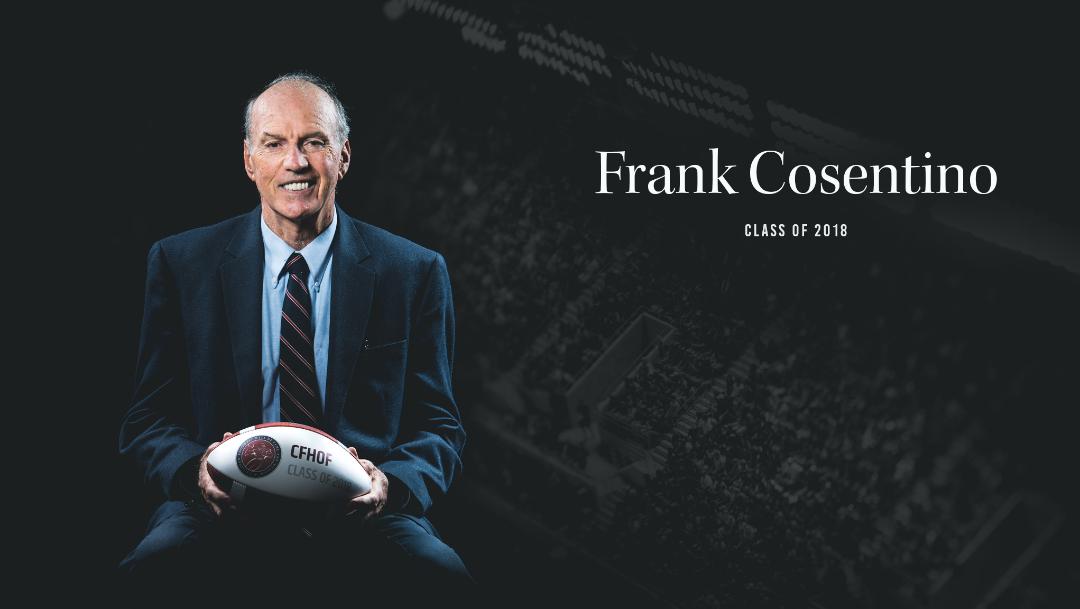 HOF Profile: Cosentino played and wrote his way into history

Frank Cosentino has been very gracious about his induction into the Canadian Football Hall of Fame. The former CFL quarterback, university coach turned academic and author of 18 books — including three on Canadian football — couldn’t be happier to be going into the Hall as a builder.

But he’s known for a long time that this was coming.

“Norm Marshall,” Cosentino, 81, begins. “He’s the first guy who telecast the Grey Cup game in 1952. He was a radio station sports reporter CHML in Hamilton. When my first book on Canadian football came out in 1968, he actually said, ‘You’ll be in the Hall of Fame someday because of this book.’

“I think that book and my writing has played a prominent role here.”

Builder suits him best, but he’s qualified for the hall in every way imaginable. He was a star quarterback at Cathedral High School in Hamilton, where his team won a city championship. He moved 90 minutes away for university and won a pair of Yates Cups (1957 and 1959) with Western. The Tiger-Cats brought him home, making him the first overall pick of the 1960 CFL Draft.

As a pro, Cosentino was one of the last Canadian quarterbacks to get heavy usage in the CFL. He played with the Ticats from 1960 to 1966, appearing in five Grey Cups and winning two. He was traded to Edmonton and spent the 1967 and 1968 seasons there before spending the 1969 season with Toronto. He made 513 of 1,083 passes for 8,890 yards and 48 touchdowns. It’s fitting that he’ll be enshrined in Hamilton, where everything began for him, on and off the field.

“It’s my hometown, it’s where I grew up. My formative years, if you want to call them that, were spent in Hamilton,” Cosentino said.

“I had a face, if you will, with sport in Hamilton because I played fastball, baseball, basketball and football in high school too. My wife and I went to the same school, Cathedral High School. We met there, got married there. Our firstborn son was (born in Hamilton). I still have a brother and sister and all sorts of nieces and nephews in Hamilton. It is sort of special to go back as a Hall of Famer.”

As his football career took him across the country, Cosentino never stopped thinking about what would be next for him. He picked up a business administration degree at Western and while he was with the Ticats he earned his bachelor of physical health and education at McMaster University in 1967. While in Edmonton, he found out about a masters in physical education at the University of Alberta. When he finished that in 1968, he went on to a doctorate program at the U of A.

As his playing career wound down, he made the move back to Western to coach the Mustangs, while taking on an associate professor role. The Mustangs won Vanier Cups in 1971 and 1974, with Cosentino’s academic career and identity as a sports historian taking shape along the way.

He feels a connection with all of the sports books he’s written. The topics range from Canada’s winter Olympic gold medalists to the 1972 summit series, to Almonte Ont.’s sports innovators James Naismith (the creator of basketball) and R. Tait MacKenzie, a pioneer in the development in kinesiology. His four books about Canadian football hold a special place in his heart, though.

There’s a sense of glee in his voice as he recounts digging through football artifacts at a beach house in Hamilton before the Canadian Football Hall of Fame opened in 1972 as part of researching his first book, Canadian Football: The Grey Cup Years. He delighted in poring over the minutes of CFL meetings spanning decades, up to 1990 for another book. Cosentino was and still is at his happiest when his passions — football and sports history — can intersect.

“The only reason I was able to go on to an academic career was because of football. I found out that in high school if I didn’t pass my year I wouldn’t be able to play football anymore. That carried me right through.”

Also carrying him through a life of football and academics was his wife, Sheila.

“She was kind of the glue that held everything together. Here I was in school for most of my football career and coaching career and she had four kids (Tony, Mary, Teresa and Peter) that she had to look after while I was off doing my thing,” he said.

“The support from that end helped me to become what I ended up being, which I think says a lot.”

The day of our conversation, Aug 15, was his and Sheila’s 59th wedding anniversary.

“That’s one thing that was very important and means a lot to me,” he said.